As a City Council member and later, she helped shape the modern Seattle. 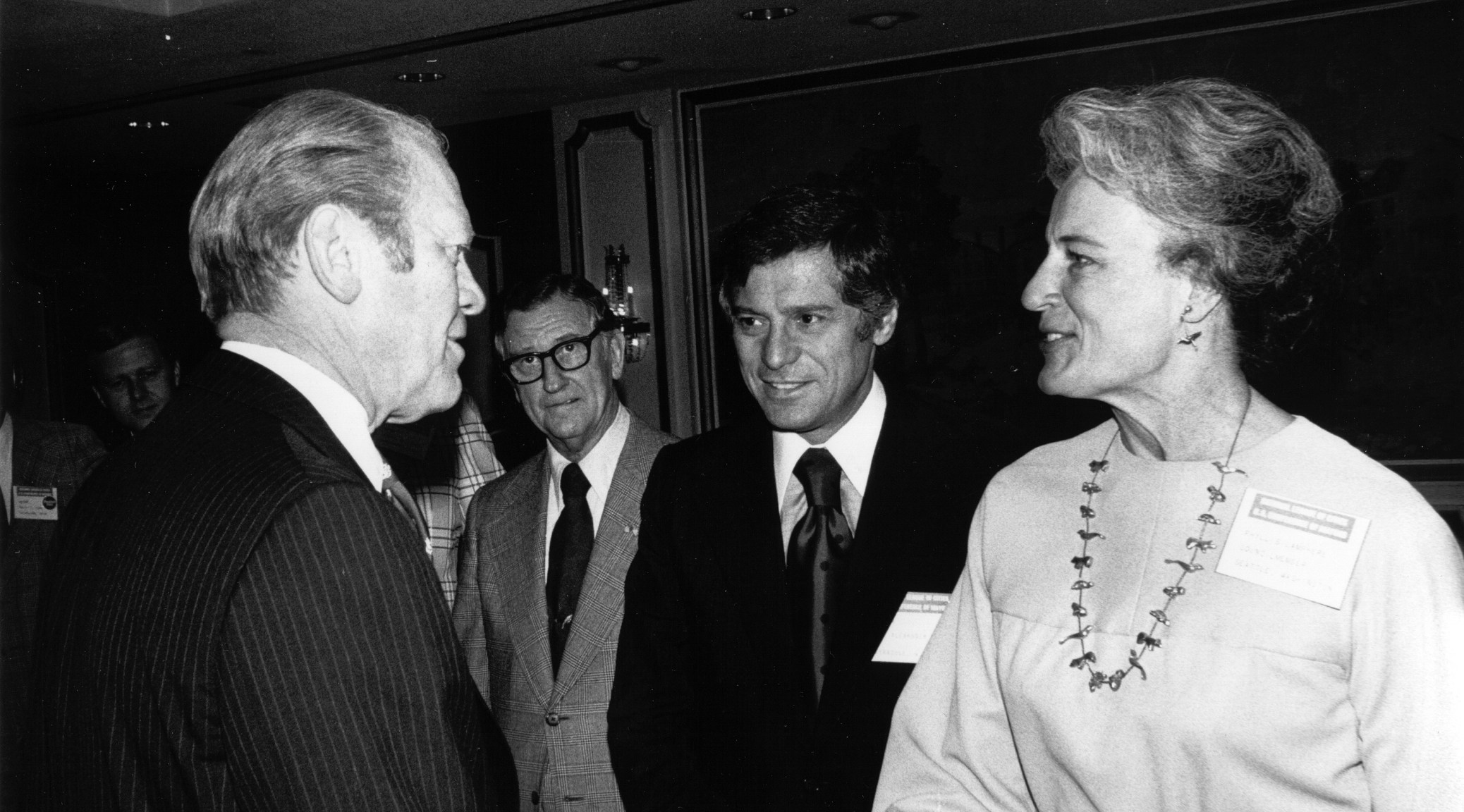 Phyllis Lamphere meets with President Gerald Ford. Lamphere was president of the National League of Cities at the time. (Courtesy of Washington Secretary of State Blog)

When I think about Phyllis Lamphere, who died last week at 96, I cannot help remembering my first meeting in the 1960s with the incredible city leader. At the time, I was a new League of Women Voters member, nervously about to lead a unit discussion on the Seattle city budget.

I was barely into my audacious role when, to my surprise, Phyllis arrived as a resource. She had not only authored the League study, but, in the process, she discovered that the crusty Seattle City Council (a lone woman and eight men) had established a secret slush fund to finance pet projects. I was so in awe of Phyllis' presence and expertise that I broke out in dollar-sized hives. But, thanks to Phyllis, we managed a spirited discussion.

In 1967, soon after that League study, Phyllis made the decision to run for Seattle City Council. She had the support of CHECC (it stood for Choose an Effective City Council), a group of young professionals trying to reform the business-oriented council. Lamphere was swept into office along with Tim Hill, later a King County executive known for his advocacy of bicycling, and Sam Smith, the council's first African American.

Lamphere worked with her allies, who would soon include CHECC-backed council members Bruce Chapman and John Miller, to pass a charter amendment, giving the mayor greater authority. They approved an open housing ordinance, ending the disgrace of redlining that barred people of color from living in all-white neighborhoods.

Lamphere took the lead on many innovative programs during her 11 years in office. Among programs with her distinctive stamp were a new waterfront aquarium, Myrtle Edwards Park and an ordinance regulating billboards. She worked to win federal funds for the modern West Seattle Bridge and bucked Seattle Fire Department disapproval to establish traffic circles in Seattle neighborhoods — styling herself "the roundabout queen."

Coupled with Lamphere's lengthy list of accomplishments was one misstep that might have wiped out a favorite part of the city. She had worked on an urban renewal plan to redevelop land in and around the Pike Place Public Market. The plan drew fierce opposition from architecture professor Victor Steinbrueck, Friends of the Market and members of Allied Arts. They refused to consider Lamphere's attempt at a compromise. The Friends drafted Referendum 71 to preserve the city's beloved market. The referendum drew overwhelming support, but, curiously, so did Phyllis's re-election campaign.

When Mayor Wes Uhlman declined to run for a third term in 1977, Phyllis was among the 15 contenders, including three other council members. The crowded primary drew conflicting endorsements, but none more glowing than a rare solo endorsement for Lamphere. Seattle Post-Intelligencer Publisher Bob Thompson authored a column headlined: "One Whose Name Must Lead All the Rest for Mayor." Thompson wrote, "Of the qualified candidates for mayor, Mrs. Lamphere is the only one who was born and reared in this city. She possesses a keen mind, a depth of knowledge about municipal affairs that is awesome and a consummate belief in the future greatness of Seattle."

Facing difficult odds, Phyllis lost in the primary. Also busy at the time as the first woman to lead the National League of Cities, she had been unable to devote herself fully to the campaign. However unfairly, she also suffered from those who wouldn't vote for a woman because of parallels to Gov. Dixy Lee Ray, the state's combative woman governor at the time.

Soon after her loss, Lamphere resigned her council seat to take the job of regional director of the federal Economic Development Administration. In 1980, the regional office was moved to Denver and she resigned rather than relocate. Remaining in Seattle, she formed a public relations firm and resumed contributing to her hometown. She was appointed to the board of the Washington State Convention Center and helped locate that facility atop the I-5 freeway. She insisted that the center's great hall should have no pillars to obscure views and she took over as the center's art chair.

She joined the Seattle Parks Foundation and pushed for a park at South Lake Union. She often journeyed to the city council to lobby for that park. When it looked as if certain design elements would have to be sacrificed to financial pressures, Lamphere marched into the offices of council Finance Chair Richard McIver and insisted the city honor the park's initial vision.

Explaining revisions to restore the park spending, McIver threw up his hands and told fellow council members, "You don't say 'no' to Phyllis."

In 2000, Phyllis moved into Horizon House. There, too, she took over the arts committee and remained active in civic affairs, serving on boards well into her ninth decade. Last year, several former council members, myself included, met with her on an overcast July morning.

We had coffee in an art-bedecked common room, and Phyllis was good enough to offer advice. She talked about her civic successes and what she envisioned for Seattle's future. I recall  chuckling over one personal story, also illustrating that you didn’t say no to Phyllis. She told us that, after moving to Horizon House, she had finally decided to give up driving and get rid of her car.

"My family said they would take me anywhere I wanted to go," explained Phyllis. Not long after, she did need a ride. "I called around,” she said, “but no one was available to take me where I needed to go."

So Phyllis enlisted a Horizon House friend to go car shopping. The two found a salesman more than eager to display the latest models. According to Phyllis, after some negotiating, the salesman looked uncomfortable. He cleared his throat and finally asked, "Which of you ladies will be driving the car?"

Phyllis confirmed that she would be driving. But she said she needed to check prices elsewhere and would let him know. Later, she was talking with one family member and, when asked what she had been doing, mentioned car shopping. She concluded, "Since then I haven't had to ask twice."

Phyllis Lamphere was an amazingly effective city official, a champion of transparency and civic participation. She lost only one election: her campaign for mayor (she came in fourth). That loss was Phyllis' greatest regret. It, too, may have been a loss for the city, as no candidate was any more determined to boost her hometown than the woman who had persevered and succeeded in life and government.

Note: There’s an in-depth profile of Phyllis Lamphere on the Washington Secretary of State’s Legacy Washington website, part of its exhibit “1968: The Year that Rocked Washington” on display in the state Legislative Building.