Sally Bagshaw will not seek re-election to Seattle City Council

With two incumbents already out, the 2019 council race is shaping up to be raucous. 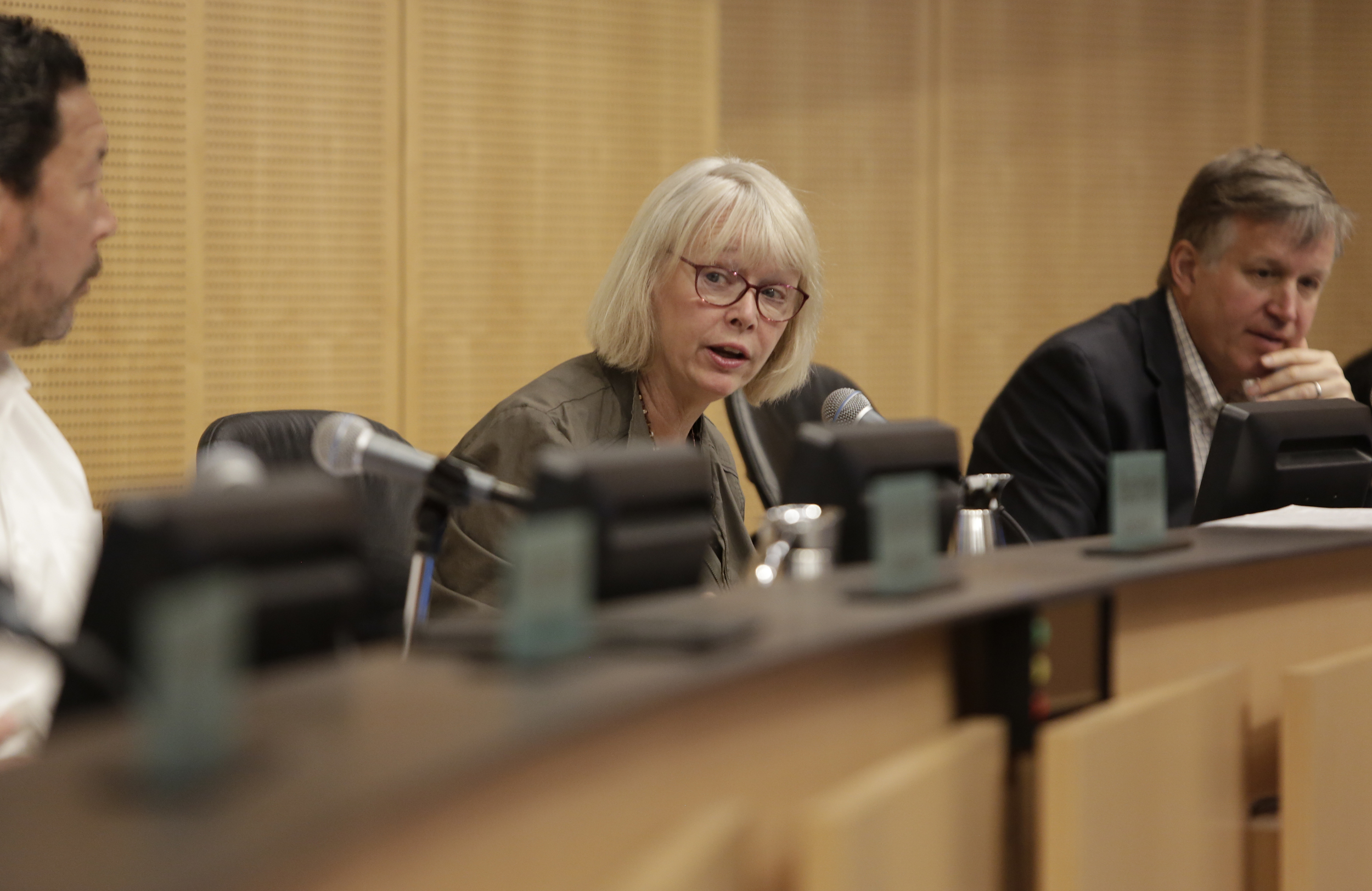 Councilmember Sally Bagshaw is pictured during a Seattle City Council special meeting of the Finance and Neighborhoods Committee Friday morning in Seattle, May 11, 2018. (Jason Redmond for Crosscut)

Longtime Seattle City Councilmember Sally Bagshaw will not seek re-election next year, bringing to an end what will be a 10-year period on the council.

In City Hall and Seattle’s political circles, Bagshaw’s pending exit has been the city’s worst kept secret. But while she has long made her intentions known to friends and allies, Bagshaw held off on going public until after this year’s budget deliberations, which she led.

In an interview at her favorite downtown coffee shop, Bagshaw said she decided she would not run again after her last election win, in 2015. “I really decided at the last campaign that my next phase, whatever that would be, was in the offing,” she said. “I was not going to do this for 14 years.”

Her announcement comes weeks after one-term Councilmember Rob Johnson said he would not seek re-election, telling The Seattle Times that he had made a promise to his family that he would serve only a single term. Bagshaw’s announcement means that two out of the seven council seats on the ballot in 2019 will be open, adding intrigue to what already promises to be a raucous campaign season.

Bagshaw is one of the council’s three longest-serving members. She and Councilmember Mike O’Brien were both elected in 2009; Council President Bruce Harrell was elected in 2007.

She was first elected to an at-large position, as were all other council members at the time. After council elections were broken into neighborhood districts in 2015, she was elected to represent District 7, which includes downtown, Queen Anne and Magnolia.

In a statement, Mayor Jenny Durkan praised Bagshaw. "I have been lucky to know and work with Sally Bagshaw for many years, and I have been lucky to see firsthand Sally’s love for Seattle and commitment to more vibrant, inclusive communities," she said. "For decades, she has been a tireless voice for our most vulnerable neighbors."

In her time on City Hall’s second floor, Bagshaw has seen a tectonic shift both on the council around her and in the city as a whole. With the departure of her former council colleagues Sally Clark, Richard Conlin, Tim Burgess and Tom Rasmussen, the council has moved to the left of Bagshaw. Where activist Nick Licata was seen as an outlier when she was first elected, the current slate of council members, O’Brien, Lisa Herbold, Lorena González, Teresa Mosqueda and Kshama Sawant, have put Bagshaw on the more conservative end of the spectrum — by Seattle standards, anyway.

The turnover on council is reflective of the hypercharged pace of change in the city. It was all about “transportation and jobs when I first came in,” said Bagshaw. “Because we were at the underbelly of the recession, there were a lot of people who were unemployed and certainly underemployed.” Amazon, she said, was still just an intriguing local company.

Since Bagshaw first took office, Seattle has grown by more than 100,000 people. And with that growth has come enormous benefit for some. Unemployment was over 8 percent in her first months in office; it’s now about 3 percent. The city’s budget has grown by over $2 billion in that time, from $3.6 billion for 2010 to $5.9 billion for 2019.

Concerns over transportation have grown, but homelessness has become the top issue for voters. Years of increases in housing costs have led to 12,000 people living on the streets or in shelters in King County last year.

While some council members have argued forcefully for quick action by the city, others have expended more energy calling for regional collaboration. Bagshaw fits into the latter camp. Even as some of her colleagues called for new taxes on large businesses within Seattle, she continued to advocate for a highly collaborative approach that included business, wearing out the phrase “bring everyone to the table.”

It was an approach she stood by, even as it frustrated her colleagues, especially Sawant — who accused her of bowing to the pressure of Amazon. Some in the activist and service provider community have grown tired of hearing about the need for regional solutions, viewing it as a cop-out for the city acting with more urgency now.

Still, said Bagshaw, “When people are included as being part of the solution, stuff happens. It may not happen like the way I visualize it, but it happens. But if you don't include them on the front end, they're just mad and then you have the lawsuits and it takes you twice as long."

Looking back on her time in office, Bagshaw said she’s most proud of the progress the city has made on the waterfront and KeyArena. She also pointed to the establishment of a park district, a taxpayer-funded pool of money to keep parks maintained and opened.

And while she initially opposed the switch to district representation, she's taken to the neighborhood-level work. In the last year, she's been especially fired up about the revitalization of what she calls the "Yesler Crescent" — the area beginning near the Yesler entrance to light rail and down into Pioneer Square.

On homelessness, she said, yes, of course more needs to be done. But she said she’s proud that the conversation has moved away from criminalization and toward “changing the narrative that these are people that we need to and should be caring for.”

If she has regrets, it’s the pace of progress in the city — the dreaded Seattle Process. “I suppose we can always be criticized for needing to do more,” she said. “The fact of the matter is how difficult it is to get things done. Housing, let's just take that. ... NIMBYism is really alive and it's something we've got to deal with.”

In a statement, Seattle Metropolitan Chamber of Commerce President and CEO Marilyn Strickland said, “Throughout her tenure, Councilmember Bagshaw has taken a thoughtful, open-minded approach to representing her district during a time of rapid growth. She has set the expectation for her successor to be a collaborative leader who listens to their constituents and focuses on local issues.”

Bagshaw’s tenure has included some friction with other council members. She and Sawant have always clashed. But Councilmember González and Bagshaw had several tense moments over the past several years as well, most significantly when the two split on whether former Mayor Ed Murray should resign after sexual abuse allegations. When González called for him to step down, Bagshaw responded by urging her colleagues against "grandstanding," an exchange that angered González. Bagshaw was the first council member to publicly lend her support to the embattled mayor. He eventually resigned.

“I think that my work relationship with Councilmember Bagshaw hasn’t always been smooth, but I think what I’ve always appreciated about her is her deep commitment to building relationships and wanting to meet people in a place of trust,” said González. “I think that sort of commitment to friendship and trust is something that guides her as a council member and has made it possible for her and I to get over some of the more tense parts of our relationship to work together.”

The landscape of the 2019 elections will come into clearer focus in the coming months, but it’s widely expected to be chaotic and, at times, acrimonious. In addition to Johnson and Bagshaw’s exits, no council member will have an easy re-election campaign. Private polling has consistently shown broad disapproval with the council as a body, a trend fueled by the rise in homelessness and the drama around the so-called head tax on big business, which was passed and then repealed this past summer.

In District 6, Councilmember O’Brien has faced an occasionally hostile constituency. The list of potential and rumored challengers in that district is long, including former Councilmember Heidi Wills, who told Crosscut she’s considering. Documentary filmmaker Christopher Rufo initially declared his candidacy, saying he would be running on a platform against the “activist class,” but then dropped out, claiming he and his wife were harassed online.

In her district, Bagshaw said she has spoken with as many as 10 people who either reached out to her or who she believes could mount a successful run for her seat. One person is Michael George, a development consultant with the firm Kidder Matthews whom Bagshaw described as an “up and comer.” He declined to comment on his plans.

Three candidates have declared in District 7: Naveed Jamali, a former spy and author of the book “How to Catch a Russian Spy”; Andrew Lewis, Assistant City Attorney; and Elizabeth Campbell, a Magnolia agitator and frequent land-use appellant.

Bagshaw said she’s still figuring out what her postelection life looks like. She said she wants to stay involved in finding regional solutions for homelessness. And, though she acknowledges that it sounds trite, said she wants to spend more time with her family.

In the meantime, Bagshaw said she’s looking forward to legislating without worrying about a re-election campaign. “Next year is a year I can just really focus on getting things done.”

This story has been updated to include two additional declared candidates for District 7.