The tech giant appears to be staying put, but that doesn't mean it won't be using its newfound leverage to get what it wants. 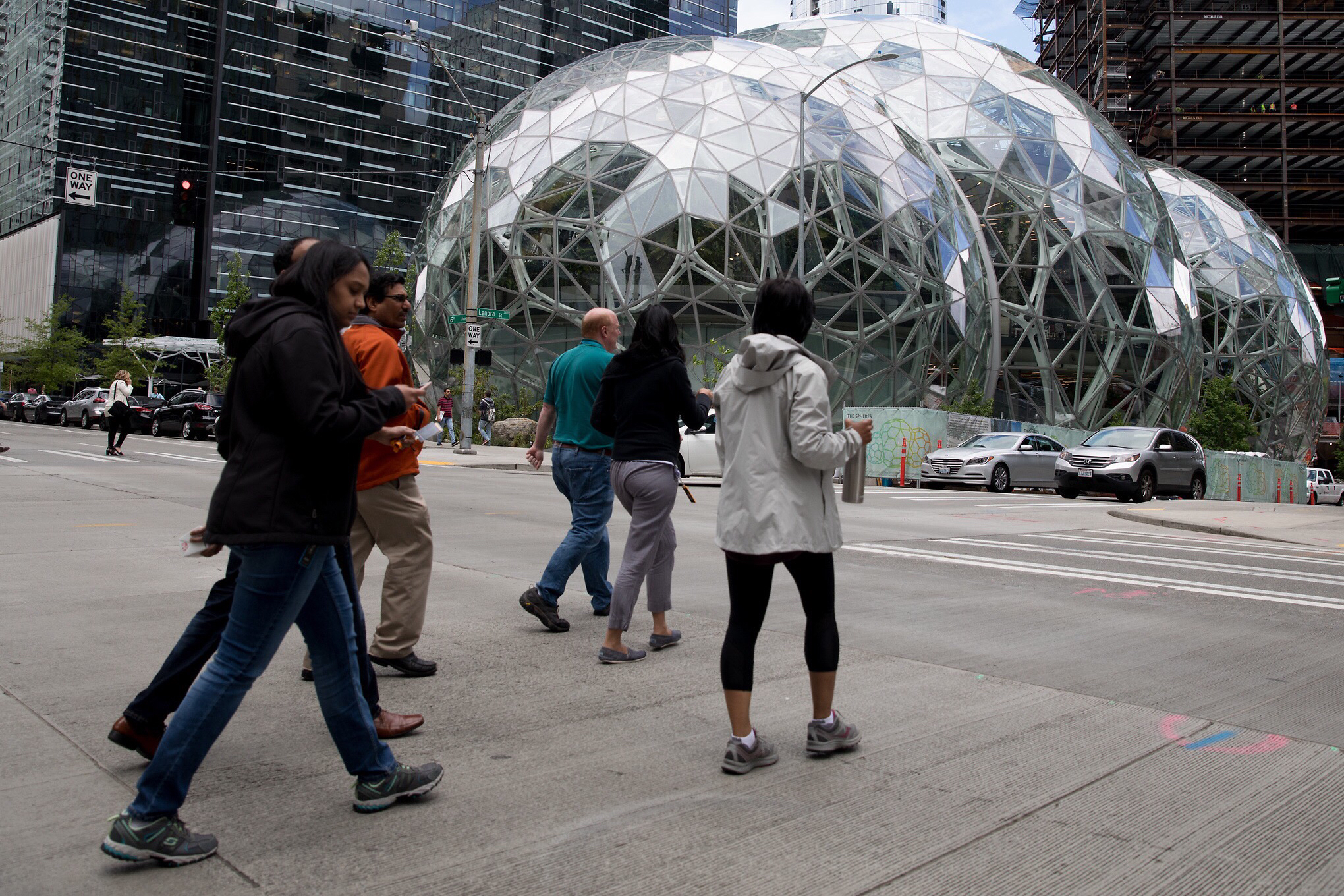 Pedestrians walk past the spheres near the Amazon campus in downtown Seattle, May 10, 2018. (Photo by Matt M. McKnight/Crosscut)

When Amazon announced plans in September 2017 to hold an open search for a city outside Seattle in which to build a second headquarters, some local business leaders and politicians panicked. They saw the call for other cities to offer up fat financial incentive packages as the beginning of the end of the Seattle’s special relationship with its home-grown tech giant

Maud Daudon, former Seattle Metropolitan Chamber of Commerce president, said at the time that Amazon’s search should be a wake-up call to Seattle, a clear sign that higher minimum wages, sick leave and other labor-friendly policies were “at best unfriendly, and at worst outright hostile toward the needs of our largest employers.”

Then-Mayor Ed Murray announced he would collaborate with Governor Jay Inslee and other business leaders to plan an appropriate response to help keep Amazon in town. Members of the Seattle City Council, King County Council, state Legislature, Port of Seattle and others signed a letter addressed to Amazon CEO Jeff Bezos, which told the company how much it was valued and requested that they “hit the refresh button” on their relationship with the region.

Now, after 14 months of pageantry and prostration by hundreds of city, county and state officials throughout North America, Amazon’s HQ2 search is over. The company announced yesterday that it will spread its second headquarters over two cities, building offices for 25,000 employees each in New York City and the Washington, D.C., metro area, along with a 5,000-employee operations center in Nashville.

Both the city and state of New York collaborated on a $1.525 billion incentive package for Amazon (including promises of a taxpayer funded helicopter pad) to bring the offices to Long Island City, a neighborhood in Queens. Virginia and the City of Arlington offered up $573 million in tax breaks and other investments in exchange for the offices in Crystal City, just south of D.C.

With about 45,000 Amazon employees still based in Seattle and more than 8,000 open positions to fill in its Seattle offices, it appears HQ2 is an expansion, not an exodus, from the Pacific Northwest. Now, with the benefit of hindsight, it’s worth asking if Seattle’s panic — and its ensuing impact on the city’s head tax debate — was ever truly justified.

Mayor Jenny Durkan declined to comment on her predecessor’s response to HQ2, or to express any lingering concerns about HQ2. But she did express confidence in the company’s future in Seattle. “We remain the true home and headquarters for Amazon,” she said. “I will continue to work with employers of all sizes, including Amazon, on how we will need them to rise to the challenge and be a good partner to our City as we create more opportunity and tackle our affordability and housing crisis as a region.”

The chamber is holding the line, albeit with a slightly softer tone. In a statement, President Marilyn Strickland said, “Landing Amazon HQ2 represents an unprecedented opportunity for New York City and Northern Virginia. Today’s announcement is another reminder that we cannot take our homegrown companies for granted. Amazon helped put Seattle on the global stage, and we need civic leadership that is committed to helping our employers succeed so our local economy can be more inclusive.”

Of course, not everyone in Seattle saw Amazon’s potential departure as a negative. No one factor is to blame for the Seattle region’s booming costs, but the company’s recent, massive expansion certainly played a role. That anger came to a head last spring and summer as Seattle debated passing a per-employee tax on large companies to pay for affordable housing and homelessness services.

In the run up to the Seattle City Council vote on the so-called head tax, Amazon declared it was pausing construction of some new office buildings in the city. The council passed the tax anyways, but repealed it just weeks later after opponents gathered enough signatures to put the issue to voters on the November ballot.

Katie Wilson, Transit Riders Union secretary general and member of the city task force that crafted the head tax policy, said Amazon’s construction stoppage, coupled with the HQ2 search, was a fatal turning point for the tax. “I don’t want to say it was decisive, but it definitely contributed to the feeling of insecurity and vulnerability to the head tax," she said. "Amazon was able to direct the conversation.”

Wilson said the city’s handwringing and fear now seem overblown. “It’s a little embarrassing that elected officials would write a letter to Amazon asking, ‘What did we do wrong?’ … I think it’s clear that their choice to start a second headquarters doesn’t have to do with how they were treated here. They needed to expand and grow and they were limited here in Seattle by available land and other things.”

That said, Wilson recognizes that the emergence of two new Amazon business centers could make the company more powerful in Seattle. “With Amazon opening two new partial headquarters, they do have a kind of leverage they didn’t have before. Now every new tower becomes an opportunity to pit these three cities against each other.”

If it does come to pass that Amazon pits Seattle, New York and Virginia against each other, it will be in keeping with the entire HQ2 process. The company’s very public selection process was a slight twist on a very old tradition of large corporations seeking financial incentives to relocate, leveraging one city’s offer to get a better offer from another.

University of Texas, Austin, professor Nathan Jenner co-authored a book on the subject called Incentives to Pander. He told Crosscut that he speculates that many of the small cities involved in the search were never real contenders, and that it is possible that they drove up the bids. Granted, he said, “Many locations seemed hellbent on going all-in no matter what,” and that Virginia offered fewer incentives than its neighbor Maryland and still came out on top.

Luckily for the towns and cities and media outlets that jumped when Amazon said jump, Jenner does not think that the HQ2 search is the dawn of a new era of flashy, public incentive-seeking by big corporations.

“This isn’t over. I think a lot of cities are upset and Amazon may have unleashed a serious PR backlash,” he said. “Honestly, most companies figured out that they can quietly shop incentive offers across cities and use professional incentive consultants to maximize their benefits. I don’t see the value of the Amazon approach for companies, and there are tremendous risks.”