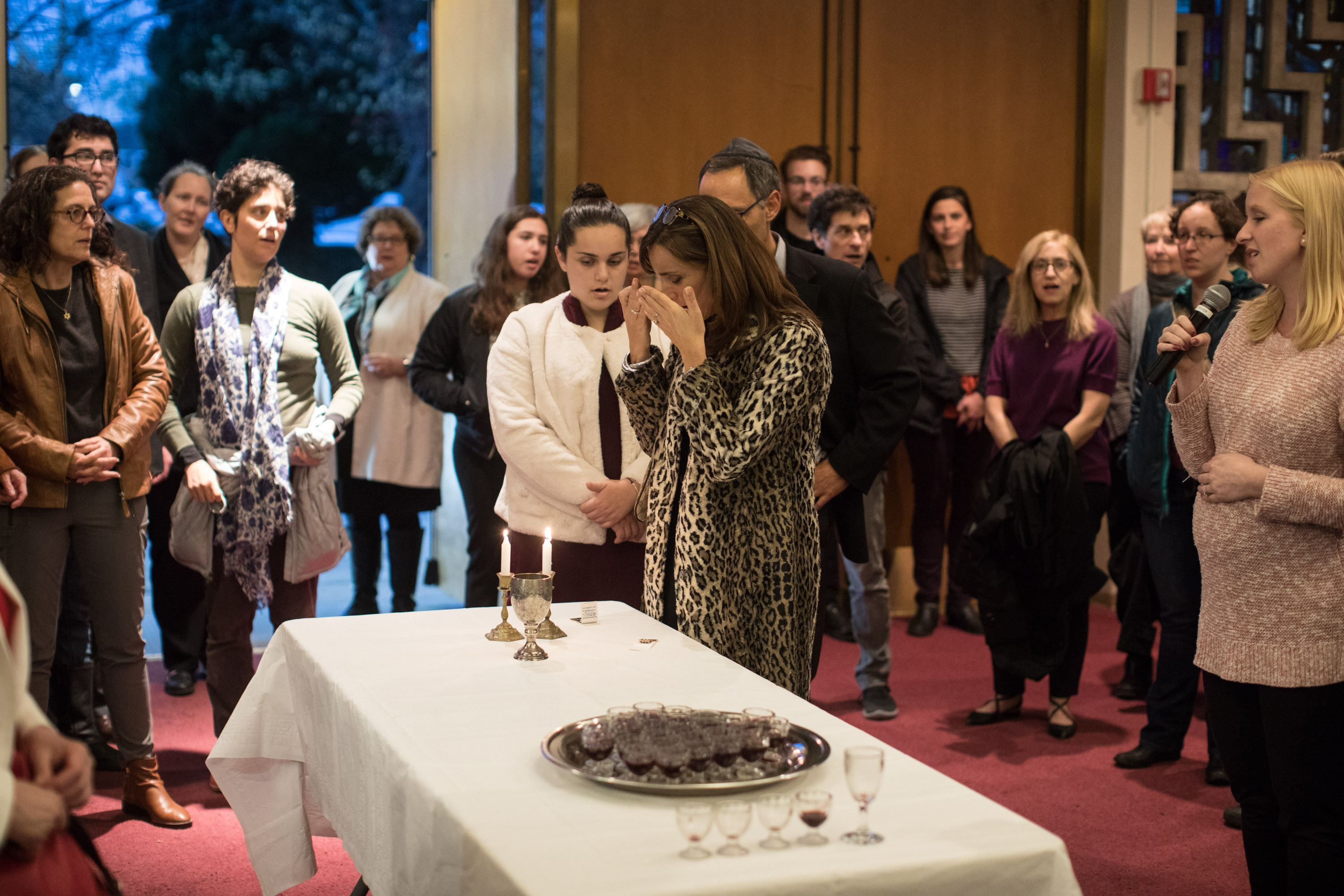 It was the first service at Seattle’s Temple De Hirsch Sinai since the shooting that killed 11 congregants at a synagogue in Pittsburgh.

The 300 or so gathered for Shabbat, the Jewish Sabbath, included those who were not members, but who came to the temple on Friday desperately feeling the need to simply be with one another.

Alex Greenberg, a 25-year-old IT consultant, said he had been raised somewhat religious, but he had not made a habit of attending weekly services. 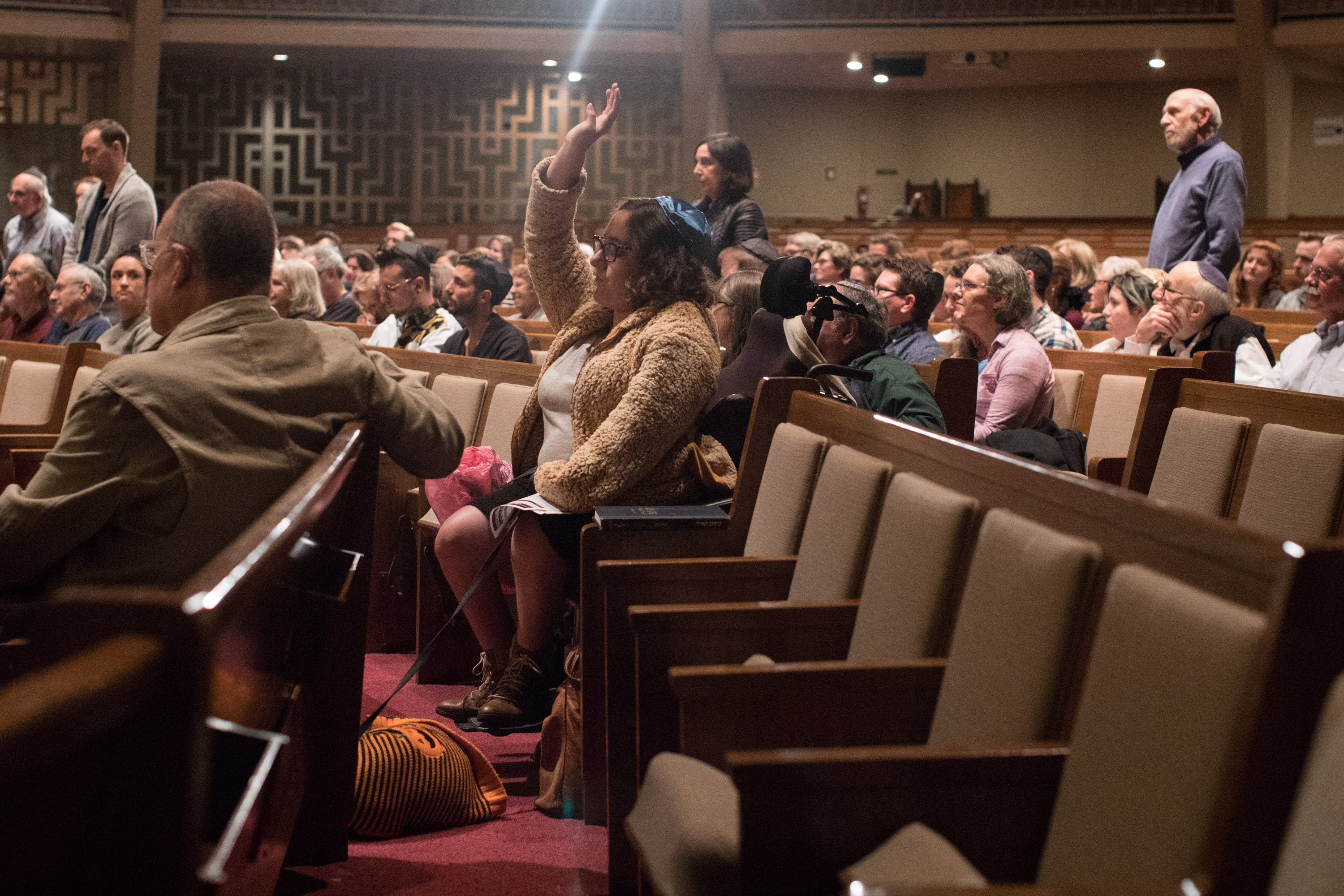 An American flag hung inside the sanctuary as Rabbi Aaron Meyer addressed the congregants, who looked as if they needed to hear words of comfort.

“It is an act of courage for a Jew to walk into a synagogue today,” Meyer began. “It shouldn’t be, but it is.”

The congregation looked on and sat in silence as they waited for him to say more.

“For too many of us, it is an act of courage to live in America,” Meyer continued, with a list of examples: being Black, speaking Spanish and living as someone who is transgender.

“The Jewish community is reeling from tragedy. We grieve. We mourn. We feel unsafe.”

And then he challenged the congregants.

That includes voting in the upcoming midterm elections on Tuesday, Nov. 6, Meyer explained.

On Oct. 27, Meyer, who is originally from Erie, Pennsylvania, had been on the way to a bar mitzvah at the temple in Seattle when he heard about the Tree of Life shooting in Pittsburgh’s Squirrel Hill neighborhood. His wife, also a rabbi, called and urged him that “when you get to the synagogue you should watch the news.”

Two days later, he presided over an estimated 4,000 people at a vigil at Temple De Hirsch Sinai to mourn those who had been killed.

“That gathering of community from every walk of life, from different faith traditions... meant the world to us,” Meyer recalled in an interview immediately after the Shabbat service.

This past week, Meyer joined other local Jewish leaders to meet with Mayor Jenny Durkan to discuss how to best protect the estimated 70,000 Jews in the greater Seattle area. They talked about the importance of teaching youth early on about the ugliness of anti-Semitism and anti-bullying and anti-bias methods, he said.

The discussion was particularly important because the Pittsburgh shooting triggered an uptick in anti-Semitic incidents, including at Seattle’s University Prep, a middle and high school located next to Temple Beth Am.

Meyer acknowledged being a Jew in Seattle can be difficult, especially when compared to places like Los Angeles or New York.

“One has to seek out the Jewish community very intentionally,” he said. “It won’t find you. You have to find it.”

The Jewish community in Seattle, he pointed out, can be a target of not only the far right but the far left as well. Despite its progressive politics — Temple De Hirsch Sinai was the only local religious institution to welcome Martin Luther King Jr. to speak, for example — Meyer said some on the left have targeted the Jewish community because of its ties to Israel and what is regarded as the oppression of Palestine.

Meyer pointed to a recent screening by the Seattle LGBTQ Commission of the film “Pinkwashing Exposed: Seattle Fights Back,” an hour-long documentary about Palestine solidarity activists who protested an Israeli delegation’s tour of the Puget Sound region in 2012, as an example of the far left’s tendency to lump all Jews together and condemn their politics.

The Pittsburgh shooter targeted the Jewish community in part because of HIAS, a Jewish American nonprofit organization based in Silver Spring, Maryland, which provides humanitarian aid and assistance to refugees. Supporting immigrants, Meyer said, is a cause that can unite the Jewish community and the left.

“All of us are immigrants to this country unless we were the First Peoples or Native Americans on whose land we are sitting,” Meyer said, echoing the words of Mark Hetfield, president of HIAS.

The rabbi explained that the Jewish faith stresses the expectation of aiding immigrants. Even those who have passed on, Meyer explained, would want the Jewish community to carry on with the tradition of helping refugees.

“For us to pull up the ladder behind us is a true moral shame,” Meyer said. 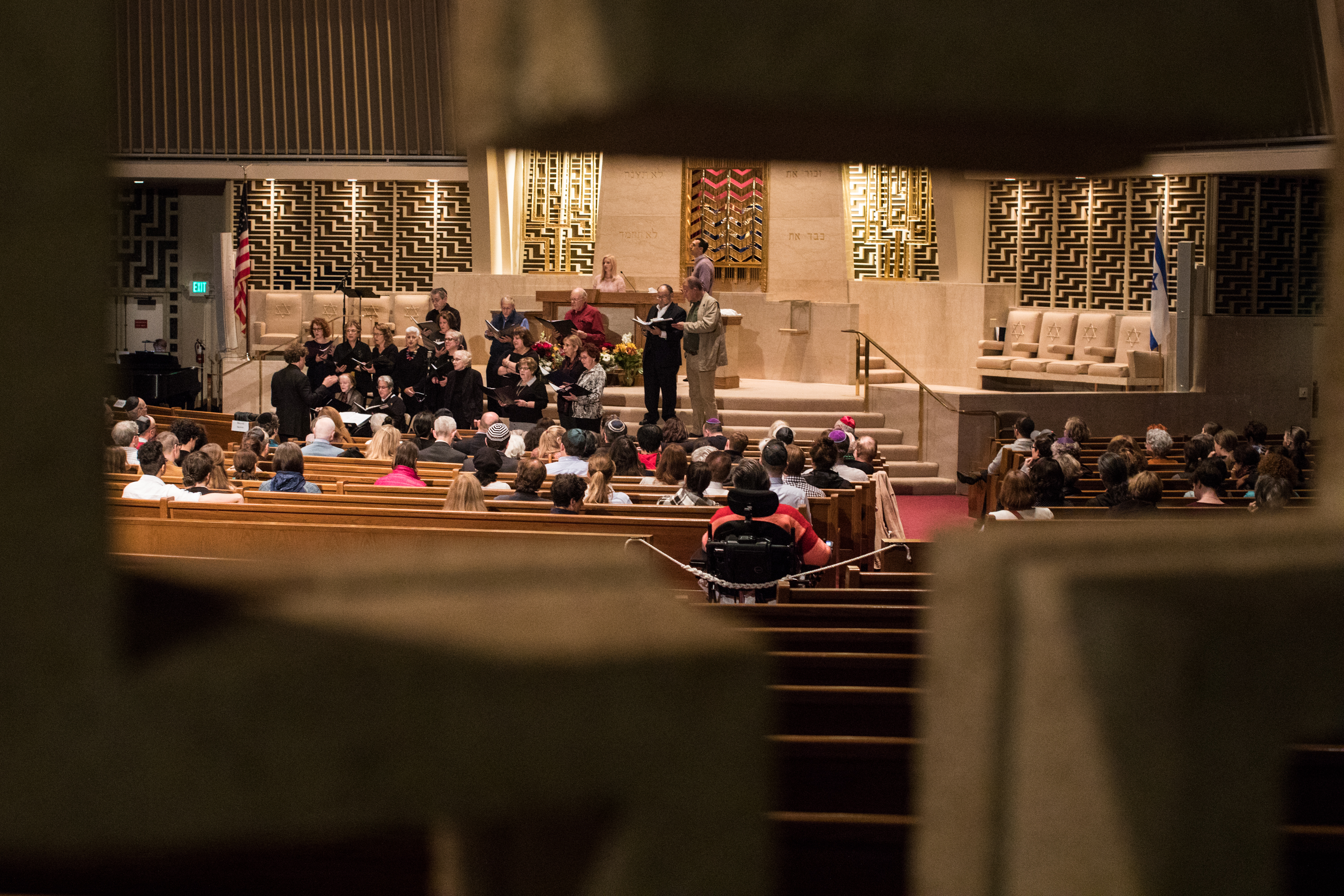 Congregants during a Shabbat service at Temple De Hirsch Sinai in Seattle on Nov. 2, 2018.

Congregants during a Shabbat service at Temple De Hirsch Sinai in Seattle on Nov. 2, 2018.