As authorities process 84 arrests from the Barbie’s Dollhouse operation, the city defends its approach to addressing prostitution. 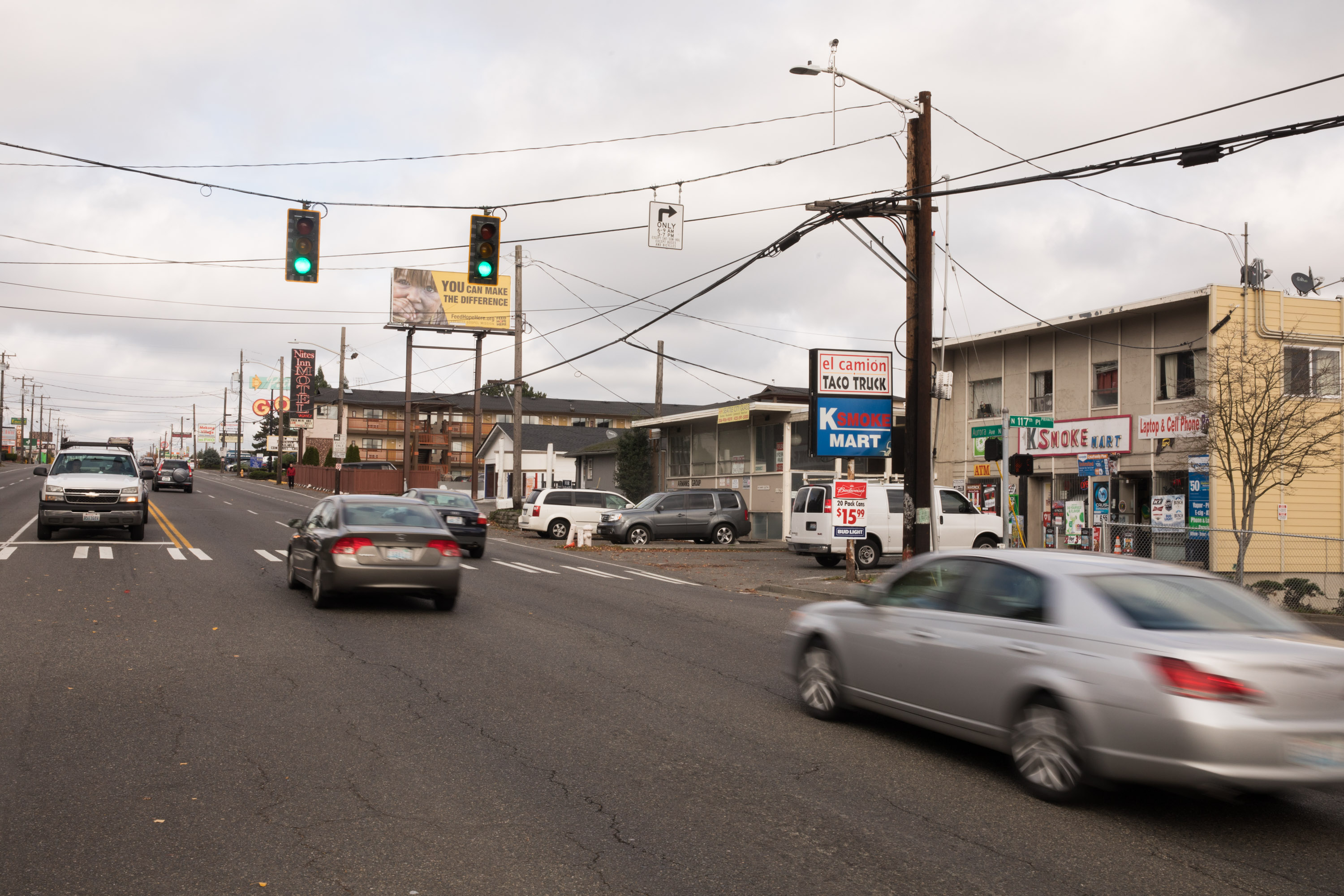 The 11700 block of Aurora Avenue North in Seattle, near where the city conducted its latest sting. (Photo by Matt M. McKnight/Crosscut)

It started with an ad on the website Backpage: “Barbie’s Doll House Massage & Spa Grand Opening.” Posted in June 2017, the notice made no mention of sex, but there were clues that indicated something more than massage was being offered: women in tight shirts lined up underneath a pink-hued banner featuring the silhouette of a model, like those seen on a trucker’s mud flaps. This grand opening was to happen somewhere in North Seattle — call for the address.

But the ad, posted on a site that knowingly allowed users to advertise prostitution, was not really for a newly opened brothel either. It was, rather, the bait in a police sting, the second in as many years from the Seattle Police Department. The first, known as the Euro Spa operation, ended in the arrests of over 200 men in 2016. Barbie’s Dollhouse would be round two.

These stings fit into the city’s broader strategy for targeting prostitution, one focused not on those selling sex, but on the people buying it. This “end demand” approach has been embraced by the city as a progressive alternative to the old law-and-order days, a way to stamp out prostitution without penalizing the sex workers in the trade.

It’s been championed by City Attorney Pete Holmes, who first began considering the new approach following a trip to Boston for a conference in 2012, and King County Prosecutor Dan Satterberg, who has even accepted money from an organization that explicitly promotes this model.

But not everyone is convinced that the new approach is working, or all that progressive.

As the Barbie’s Dollhouse cases have begun to move through the city’s court system, defense attorneys are frustrated that the city is repeating what they view as a sloppy operation. Almost every case that was not a guilty plea in the first Euro Spa operation was dismissed by either the judge or jury and the one guilty verdict that resulted from the sting was overturned on appeal. The critics doubt this second round will be different.

At the same time, some sex workers argue the operations are misguided, criminalizing what they consider a safer form of prostitution while letting actual human traffickers off the hook.

As part of a shift toward the “Nordic Model” approach to prostitution, the Seattle Police Department has largely stopped targeting sex workers for arrest. Officers with the department’s vice unit often run undercover operations on the street — up and down Aurora avenue, for example — both as men seeking sex and women selling it. But when the police pick up sex workers, instead of taking them to jail, the undercover officer drives to an RV or some other outpost where they are offered counseling and advice from members of the Organization for Prostitution Survivors, a support organization made up of former sex workers.

Buyers, on the other hand, are quickly arrested.

While the vice unit may pick up a handful of sex buyers — or “johns” — by camping out along Aurora Avenue, the number of those arrests have been nothing compared to the draw of the faux massage parlors. “We never anticipated this volume,” Sgt. Tom Umporowicz told the Seattle Times after the Euro Spa operation, which was run out of a small University District storefront.

That operation resulted in 204 arrests and received widespread media attention. One year later, before many of the Euro Spa cases had been resolved in court, the Barbie’s Dollhouse operation was launched.

The design and execution of the operations is the work of the Seattle Police Department. But because the cases are now in court, the Department deferred comment to the City Attorney’s Office.

“It’s in line with the City Attorney’s overall strategy of going after sex buyers and hitting the demand side of that equation versus the supply side,” said Chief of the Criminal Division Kelly Harris. “As you can see, they’re pretty effective.”

But that first sting did not end up being as effective as the City Attorney’s Office wanted. Harris said the mistakes will not be repeated with the Barbie’s Dollhouse operation, but public defenders nevertheless question the value of repeating the operation. “It’s a waste of the court’s time and it’s a waste of taxpayers’ resources,” said public defender Nicole Thomas-Kennedy.

Euro Spa elicited 94 guilty pleas — just under half of those charged — generally costing the men between $1,000 and $3,000 in fines. Thirty-eight agreed to “dispositional continuance” — meaning if they fulfill certain requirements, like going through a program for men who’ve been caught buying sex, the offense would be stricken from their record.

Meanwhile, 61 cases were dismissed, either by the judge or a jury declining to pass down a guilty verdict. That is a high number even by the accounting of the City Attorney’s Office. Most were defendants who could not afford the fines associated with pleading guilty, said Thomas-Kennedy.

The prosecution had issues proving whether or not the men knew what they were agreeing to, especially when language barriers were an issue. There were also problems with a lack of witnesses. One SPD employee involved was Det. Salvatore Ditusa, who was placed on leave after using a racial epithet while working off-duty and then left the department shortly thereafter. That struck him from its list of witnesses, although Harris downplayed his importance. Other cases were dismissed because of nuances around the transactions — that the undercover officer was posing as a middle-person and not the actual sex worker made prosecution more difficult.

“For dismissals, it was probably a little higher than we would expect,” said Harris.

But Harris said that for the Barbie’s Dollhouse operation, they expected to have more success, in part because they were more discriminating in which cases they filed. They also had tightened up the operation, adding a private livestream of the interactions to include more firsthand witnesses.

Public defender Thomas-Kennedy isn’t so sure. She already doubts the effectiveness of the stings in deterring prostitution and doesn’t feel they’re worth the time she and the system spend on each case. On one occasion, she was in trial for four days.

“To me it seemed like, ‘Okay are we done with this now?’’ she said of resolving the Euro Spa cases. “Because you can’t secure a conviction and it just seemed pretty pointless at this point.” When the Barbie’s Dollhouse cases started arriving, “I was surprised, because if they can’t get a conviction on Euro Spa and it’s all the same players, what is different about this one? And to me it doesn’t seem like it is different.”

Other critics say the approach fails to target actual human traffickers and instead serves to move the industry further underground, where it’s less safe.

Laura LeMoon has been a sex worker in both New York and Washington. She writes frequently on her own blog and for outlets like the Huffington Post and the Establishment and founded the Safe Night Access Project in Seattle to protect sex workers. In New York, she said, she was exploited under a pimp in a way “that was not empowering.” But in Washington State, she works for herself.

The difference, she says, is the very resource that the Seattle police exploited in setting up their raid: Backpage. And that, say proponents, is creating a big problem for sex workers.

Backpage has since been shut down by the FBI and there’s been some evidence the move has put more people on the street. LeMoon said she felt completely in control when it was functioning. When she placed an ad, “I’d get 100 to 200 calls a day. I could be picky. I could screen people in a really thorough way.”

By seeding undercover operations in this way, the city will make the work more dangerous, she argues. “The end result of stings is they drive it further underground and make it more difficult for people to screen clients or have any kind of open discussion about what’s going to happen during the session,” she said. “You remove bargaining power in terms of the sex worker.”

In a 2015 Seattle Times op-ed, City Attorney Pete Holmes pushed back on Amnesty International’s conclusion. “Decriminalization supports the very root of sex trafficking, which exists for one reason only: to supply the demand for commercial sex. By chilling the demand for sex buying, we chill the economic incentives for sex trafficking.”

Similarly, Debra Boyer, the former Director of the Organization for Prostitution Survivors told the Stranger last year, “You don’t get to buy people. … [Prostitution] is just something that is not consensual. It always starts with some form of coercion.”

LeMoon does not argue for full legalization of prostitution, but does want to see the city decriminalize it by greatly limiting penalties. “Most sex workers want decriminalization,” she said. “They don’t want the regulation from the state but we want to have the penalties removed.”

Meanwhile, the Barbie’s Dollhouse cases proceed. Several men caught in the operation have already pled guilty, while other cases are still in their pre-trial phase and will unfold over the next several months.

The Seattle Police Department declined to speculate whether it would conduct more, similar operations. For Harris in the City Attorney’s Office, the broader questions of whether prostitution should be decriminalized and how to approach the Barbie’s Dollhouse cases are two separate things. “I think that’s just a philosophical discussion about whether people think prostitution should be legal or not,” he said. “That’s a discussion for another day. Right now this law is on the books.”

Danielle Malcolm, appellate specialist with the City Attorney’s Office, put it another way: “It’s definitely not a situation where we can say, ‘oh we’re going to decide to do something different.’ We’re just working with the model we have and doing the best we can.”