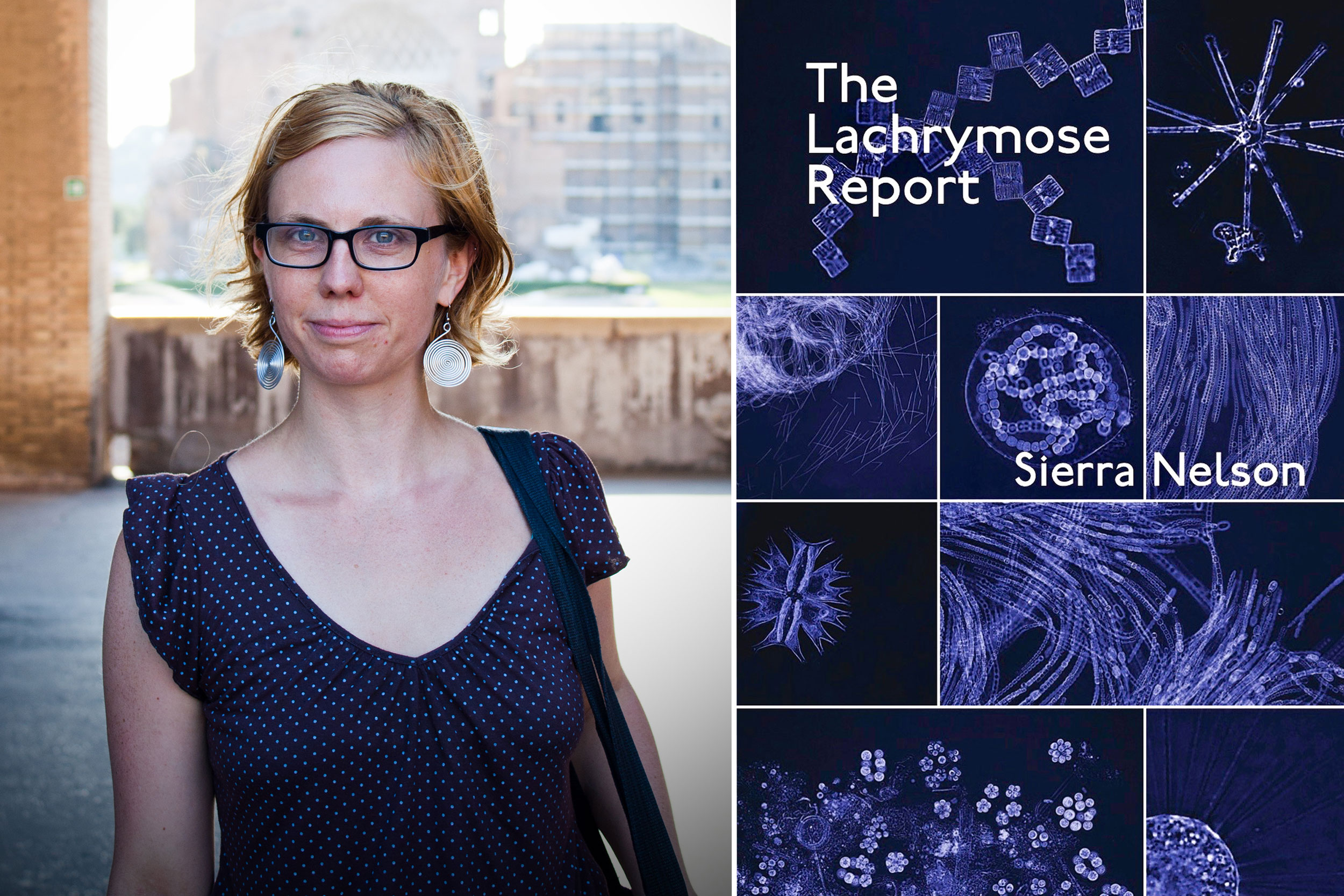 The title of Sierra Nelson’s new poetry collection, The Lachrymose Report, may evoke a chronicle of tears, but she wants to be clear: “It’s not a bummer of a book!” She’s laughing when she says this, sitting in a Queen Anne coffee shop, wearing a full-body fuzzy bear costume with the head flopped back like a hood.

The get-up is due to Halloween, but the truth is that Nelson is often in costume, for the many readings and events she participates in and hosts in Seattle’s literary community. For her performative writing trio The Typing Explosion (spontaneous poetry produced on clackety typewriters) she wore 1950s secretarial garb. For her important work with the Vis-á-Vis Society (faux-scientific poetry investigations) she wears a lab coat and safety goggles. For the Cephalopod Appreciation Society (a group Nelson founded for artistic odes to those undersea) she can be seen sporting a towering squid hat.

A far cry from the image of the brooding poet, this is a woman who likes to have fun.

When Nelson saw an early version of her book’s back-cover copy, she felt it sounded “way, way too sad” and set out to carefully catalog the feelings referenced in each of the 56 poems to make sure it wasn’t all doom and gloom. She ended up creating an index of terms at the back of the book — a feature definitely not included in most poetry collections — so you can do your own research.

The word “sad” or “sadness” appears on six pages; “happy” or “happiness” on eight. Variants of “cry” appear on 11 pages, and while “laugh” only appears on eight, surely the 10 instances of “dance” tip the scales. (See also: joke, joy, jukebox.)

The Lachrymose Report is Nelson’s first full-length book of poetry — surprising, as her poems pop up in so many journals, and given her regular appearances at local literary events. It’s also the inaugural title from Poetry NW Editions, the new book publishing arm of Poetry Northwest (the esteemed biannual journal founded in 1959). Executive Editor Kevin Craft says Nelson’s book is the perfect way to christen the magazine’s expansion.

“I definitely chose Sierra’s book to set the tone for our new venture,” he said via email. “Sierra is a Venn diagram of everything we love about poetry: potent curiosity, language rooted in transformation and discovery, a felt connection to the many odd creatures with whom we share the planet, not to mention her own active involvement in a variety of art-making communities here in the Northwest, all of which harness and enhance the better angels of our nature at the time we need it most.”

The collection was inspired in part by “weekly cry logs” Nelson keeps with Vis-á-Vis partner Rachel Kessler (in the interest of science, of course). And also by Rose-Lynn Fisher’s series, “A Typography of Tears,” in which the photographer used a microscope to document tears produced in different situations — crying, laughing, yawning, slicing onions — to see if different catalysts caused the drops to differ under magnification. It's this kind of artful approach to science, or scientific approach to art, that appeals to Nelson’s love of both poetry and biological phenomena.

“For a while, biology and English were neck and neck as majors,” Nelson says of her college days. She chose English, but “In my heart I’m still a double major,” she says. “So I find ways to bring science into my writing.” For her, the connection is clear: “Observation is key to both. And hypothesis and wonder — being amazed at what’s surrounding us, what is causing things to happen, what is happening that we cannot see?”

The collected poems contain references to barnacles, coral, cyanobacteria, seagoats, cells, antennae and how bees see color. But it’s not all biology. Topics also include sudden grips of feeling (“A rogue wave of old grief capsized me at the bar”), an insomniac’s plea (“Please lift the heavy lid off the morning”) and a lament for picnics left unattended (“the ghost meat of all the barbeques / we didn’t go to haunts our days”).

As her friend and fellow Seattle poet Rebecca Hoogs blurbed on the book, Nelson’s poems are “flowcharts of feeling” that “document the biology of being too alive.”

Many of these poems refer to time — nearly 100 mentions, according to the helpful index. “Some of the poems are trying to stop time, or hold onto a moment — or the possibility of a moment,” Nelson says. “But also feeling the impossibility of that, and the loss of it.”

The darkest poem is called “Death.” It’s buried near the end of the book, lurking there with heavy inevitability. It doesn’t give us the release of humor many of her poems do. But instead describes a sort of don’t-jinx-it denial, the fear of saying the word aloud (“I walk very carefully near it, / rolling from the outside of the foot in”).

But The Lachrymose Report also radiates joy — in the fact of being a human, alive, awkward, perhaps even wearing a silly costume. “Joy can be radical, especially in the face of fascism,” Nelson says. She finds inspiration in poets such as Ross Gay and Aimee Nezhukumatathil, who celebrate joy as voicing one’s humanity in the face of dehumanizing cultural norms. “It’s something you choose,” she says, “a muscle you have to keep working.”

Poetry can also help ground us in turbulent times. “We’re humans in physical bodies with an array of feelings,” Nelson says. “Bringing us back to that knowledge is part of what art does. Connecting with our humanity has to be part of the way forward.”

Celebrate the release of ‘The Lachrymose Report’