The $1.1-billion orca plan could be a gamechanger 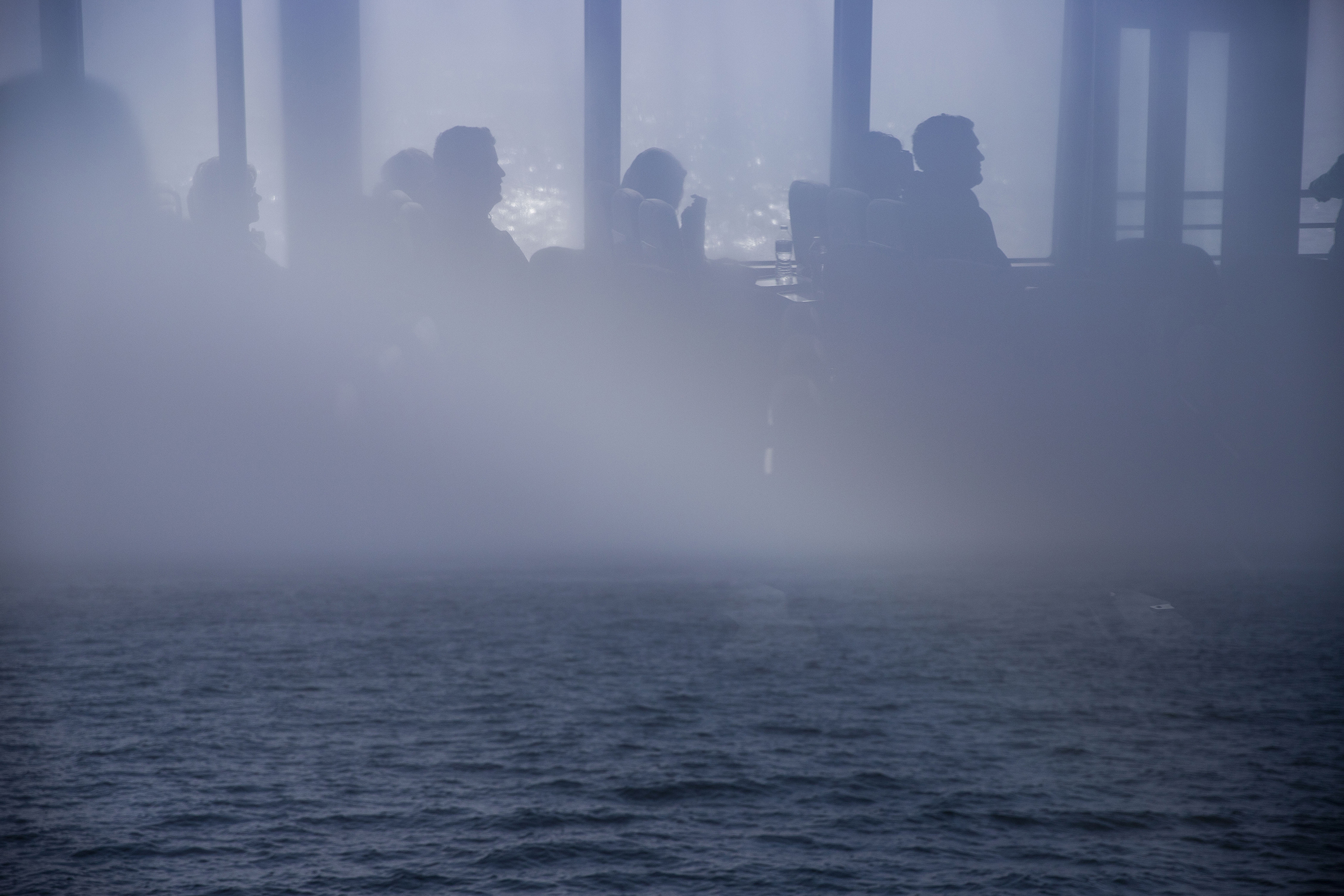 A reflection of whale watchers seen through the window of the Puget Sound Express traveling from the Port of Edmonds along Puget Sound on Friday, Oct. 19, 2018. (Photo by Dorothy Edwards/Crosscut)

The recovery plan draws from the work of the governor’s Southern Resident Killer Whale Task Force (also known as the Orca Task Force), which Inslee commissioned in March.

There is cautious optimism that the numbers back up the governor’s bold talk. Some task force members are calling the budget (which draws from the state’s transportation, capital and operating budgets) “unprecedented” in terms of funding for not just orca and salmon recovery, but also for programs that protect the entire Puget Sound ecosystem.

“I’m elated,” says Stephanie Solien, task force co-chair and Puget Sound Partnership leader. “I feel, really, a great sense of satisfaction. The governor really listened. And it makes me optimistic about our chance to be successful.”

The governor’s task force, helmed by ex-Evergreen State College President Les Purce as well as Solien, spent six months negotiating an urgent response to pull Puget Sound’s J,K and L pods out of a population nosedive that has reached a 30-year low of just 74 whales. Forty-nine voting members and more than 250 working group representatives developed a 36-point report that determined increasing numbers and access to chinook salmon are the most immediate and important way to assist the starving whales, followed by reducing interruptive boat traffic and mitigating chemical exposure in orca habitat.

The group of professional conservationists, politicians, industry advocates, scientists and tribal leaders who make up the task force delivered its suite of recommendations to Inslee Nov. 16. The group has been anxious to see whether the man who convened it would reflect their recommendations in his official budget.

A short sigh of relief

While the six professionals involved in the task force we spoke with all concur they won’t know for sure whether Inslee’s budget speaks to each individual recommendation until he has briefed individual agencies on specific breakdowns, no one could point to a recommendation area that hadn’t been accounted for in the budget as it was presented Friday.

“We put forward a number of the short-term and midterm actions that we knew needed to happen, and investments that needed to be made to help find fish and salmon for the orca and he embraced them all,” Solien says. She points to Inslee’s emphasis on hatchery production numbers, habitat restoration, increases of dam spillover (which helps shuttle smolt to the sea and back) and funding for stronger laws that protect shorelines.

“They're all tied together — it's like going to the doctor and saying, ‘Well, should I quit drinking or stop smoking or eat better?' But we have to do all of those things and that's really what this package says,” says Joe Gaydos, a task force member and science director of the University of California at Davis’ SeaDoc Society, of Inslee’s holistic reflection of the task force’s recommendations. “It says we're gonna do all of these things and we're gonna do it now. We're not waiting for a couple years.”

“I've been working on endangered species and wildlife population health for almost two decades, and I can’t give you another example of a state leader stepping up like this and, frankly, putting the state’s money where the state's heart is,” Gaydos adds.

Task force members praised the inclusion of contaminant-focused budget items and the contentious call for a whale-watching moratorium. If passed, Inslee’s budget would end whale watching of Southern Residents for three years and put in place many other measures aimed at limiting the intrusion of boat activity into orcas’ lives.

Despite early controversy, the whale-watching community appears committed to orca health in spite of the three-year moratorium on Southern Resident viewing.

“I do feel like the whale-watching community will respond positively — we know they're advocates for these animals and we hope to work with them on turning this into a win for them,” says Mindy Roberts, Puget Sound program director at the Washington Environmental Council. Roberts sat on the task force’s contamination working group.

“A lot of people see [whale-watching coordinators] as the bad guys, but they love them as much as we do, and them being able to say, ‘I'm gonna step away for three years and give up revenue and show people other whales,’ I think is huge,” Gaydos says.

When I asked Jeff Friedman of the Pacific Whale Watch Association what he thought of the ban, he deferred to a statement from the PWWA shared by publicist Kyle Wall.

“Whale watching and responsible no/low-impact ecotourism is critical to education and conservation efforts that we all are engaged in to protect all whales in the Salish Sea,” said the PWWA in the statement. “As the Legislature, the governor’s task force, and the public continue working towards ensuring the safety of the Southern Residents, the conversation around these issues needs to remain focused solely on science-based actions that will best support the future of these whales, including go-slow zones aimed at quieting the waters. These are critical actions that the Pacific Whale Watch Association is deeply committed to in the upcoming legislative session and every day moving forward.”

In his budget announcement, Inslee impressed that the state will continue to support whale-watching as an industry. “It’s really important for us to spread the news that whale watching will continue in the state of Washington, [and that] there are many other whales to watch other than the orca,” he said.

Now that Inslee’s on board with the task force’s recommendations, advocates will move on to make the state Legislature see the benefits of his $1.1-billion request.

Inslee’s plans for the Lower Snake River dams might be the biggest point of future contention. Wildlife supporters have pushed for dam breaches or removal for years, but communities and industries that rely on the dams for power and shipping have been harder sells. While science suggests the dams should come down to benefit marine life, the task force ultimately recommended setting up a stakeholder group with representation from people immediately dependent upon the dams; the governor proposed putting $750,000 toward this process.

“If we learned one thing during meetings, it’s that this issue is important to thousands of people that want to see salmon recovered in the Columbia and orcas fed, [but it’s also important] to communities that base their livelihood on these dams,” Solien says. The task force concluded involving stakeholders in a discussion about the implications of and rationale for breaching the dams is the smart way to get local buy-in and support, regardless of whichever course of action the state ends up taking.

“I know that people in Eastern Washington do care about salmon recovery in their districts, and we just need an opportunity to sit down with them,” says Solien, who is originally from Spokane. However, statements submitted almost immediately after the announcement from organizations like the Association of Washington Business suggest dam breaching could face a long uphill battle.

“Removing dams on the Snake River would have only a marginal impact on the salmon available to orcas, but it would take away a reliable source of clean energy, put more trucks on the highways, and threaten Washington’s economy, particularly east of the Cascades,” said the AWB in a statement released shortly after the budget announcement.

Regardless of how much of the $1.1 billion budget comes to fruition, it will be important for whale advocates to keep pushing for even more help, task force members say.

The task force is likely to have four meetings over the next year, with its first in mid-March, Solien says. She and co-leader Purce anticipate discussing human population growth and land development, and how those factors impact the state’s marine life. She also expects to focus task-force meetings on climate change, and recommendations for mitigating warming waters that kill salmon.

Until then, the task force members will try to get in front of legislators to help explain the importance of their recommendations and why they’ve earned a place in Inslee’s budget.

“We’ve got our work cut out for us, but I’m optimistic the same compassion and support that the task force brought the first year, we’ll have that same enthusiasm and compassion next year,” Solien says.