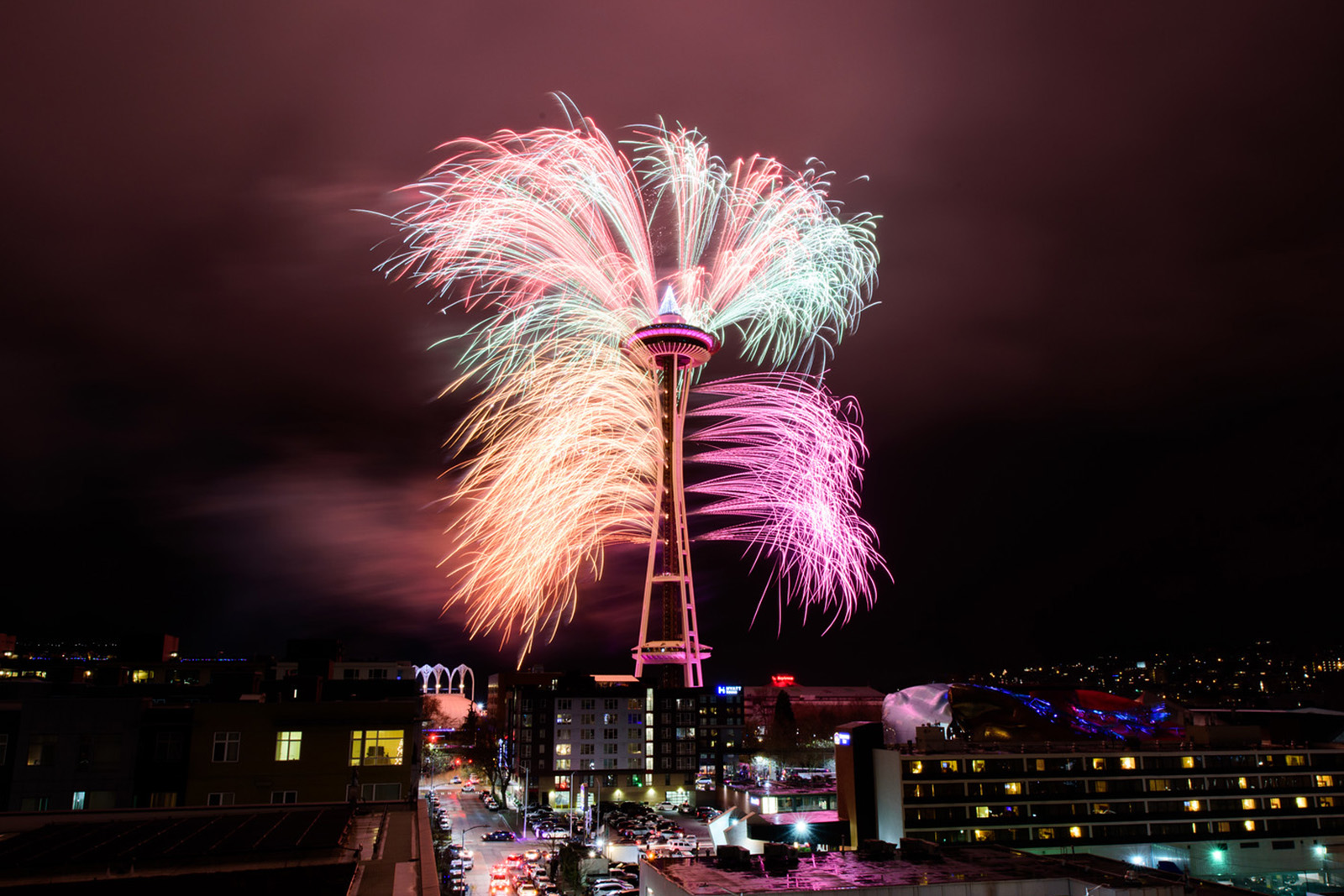 The fireworks display at the Space Needle — a reliable source of New Year’s Eve sparkle. Read below for some more out-of-the-box options. (Photographed in Seattle, Dec. 31, 2017 © Tim Durkan Photography)

It’s the question of the season, as the old song goes, “What are you doing New Year’s Eve?” For those seeking something a little out of the ordinary, consider this roundup of unconventional options for ringing in 2019. We’ve got events for natural history buffs, Hamilton fanatics, supersonic jet junkies, disco queens, polar plungers — or anyone looking to adopt one of these personalities in the new year. Just remember, they say New Year’s sets the tenor for the next 365 days, so choose wisely! And take a cup of kindness yet for auld lang syne.

If you’ve always dreamed of spending New Year’s Eve inside a natural history museum (bringing new meaning to the phrase “party animal”), get tix for Take Flight: Last Night at the Burke. It’s the final hurrah for the destined-for-demolition building, which has housed the collection — including 55,000 mammal specimens, 62,000 fossils and 99,550 birds, eggs and nests — since 1962. The Burke is celebrating its move to fancy new Tom Kundig-designed digs with an all-out blowout in the old space, featuring exhibit rooms “reinvisioned” by artist collaborative Lovecitylove, DJs and dancing and poetry slams in former galleries, and live music and a tap dance show in the beloved cafe. The promo for Take Flight says “Dress to impress,” so ask yourself: What would Mary Leakey wear?

Rise Up! The Hamilton Tribute Band

Yes, musical theater nerds, there’s an NYE event tailor-made for your tastes! The Columbia City Theater is hosting a performance by Rise Up, a diverse collective of talented Seattle-based singers and musicians performing songs from the hit musical Hamilton. Spending New Year’s singing tunes about true events in U.S. history might seem a bit snoozy, but given the subject matter — immigration, political infighting, a sex scandal — it’s terribly au courant. You could certainly do worse than start the new year with thoughts of revolution in the name of democracy. Bonus: the evening kicks off with Seattle sextet The New Triumph, an Afro-Latin flavored groove-inducing machine.

Hang on to your conical New Year’s hat because there’s a lot going on here. The event takes place at the Orient Express, which is a Chinese restaurant and lounge housed inside a series of old-world train cars in a parking lot in Sodo. The name of the event is Stayin’ Alive, which means it’s a sequin-studded disco-themed party (including a pop-up shop selling vintage 1970s clothing), complete with DJs spinning throbbing Donna Summer-era dance beats. Plus it’s New Year’s Eve and there will be drag queens and a glitter station and a magician. See? It’s kind of Saturday Night Fever meets Cabaret meets Mad Max, but on a train. Is this what the future holds? Time will tell, but meanwhile, it sounds like a helluva good time.

“Tip-to-tail” may sound lighthearted and jaunty, but this is your chance to explore what looks like it could have been Darth Vader’s private jet: the Lockheed M-21 Blackbird at the Museum of Flight. The only surviving plane of its kind, the Blackbird was revolutionary when built in 1963. And it remains the world’s fastest airplane, capable of speeds topping Mach 3 at an altitude of more than 85,000 feet. Built for a CIA drone project intended for intelligence gathering, the plane and its sleek, black shape looks exactly as stealthy and ominous as that sounds. Hourlong tours serve up the history of this dark bird — and they’re are only available during the week between Christmas and New Year’s. So if you’re looking to start 2019 with a show of remarkable aviation technology (not to mention a forbidding reminder of military prowess), sign up and take heart that this particular war machine is grounded in a museum.

Maybe what you need most right now is a reboot — the kind of full-body reset that only comes from submersion in a very cold and somewhat milfoil-flavored body of water. If so, join the crowds of kooks who jump into Lake Washington on New Year’s Day. You’ll find a brigade of revelers wearing swimsuits and silly costumes at Seattle Parks & Rec’s Polar Plunge at Matthews Beach, but of course you can leap in from any public beach. Feel like the new year demands something a little more bracing? Try the even icier waters of the Puget Sound. An unofficial dunking happens at Golden Gardens in Ballard, as well as an organized “Polar Bear Plunge and Run” (you can skip the run, but heating up before the plunge isn’t a bad idea). Either way, you’ll emerge feeling ready for whatever 2019 brings — or at least grateful for small pleasures, like a warm towel and a thermos full of hot coffee.