The Seattle Conservation Corps has been equipping members of the local homeless population with paid jobs in construction, from bricklaying to carpentry to plumbing. 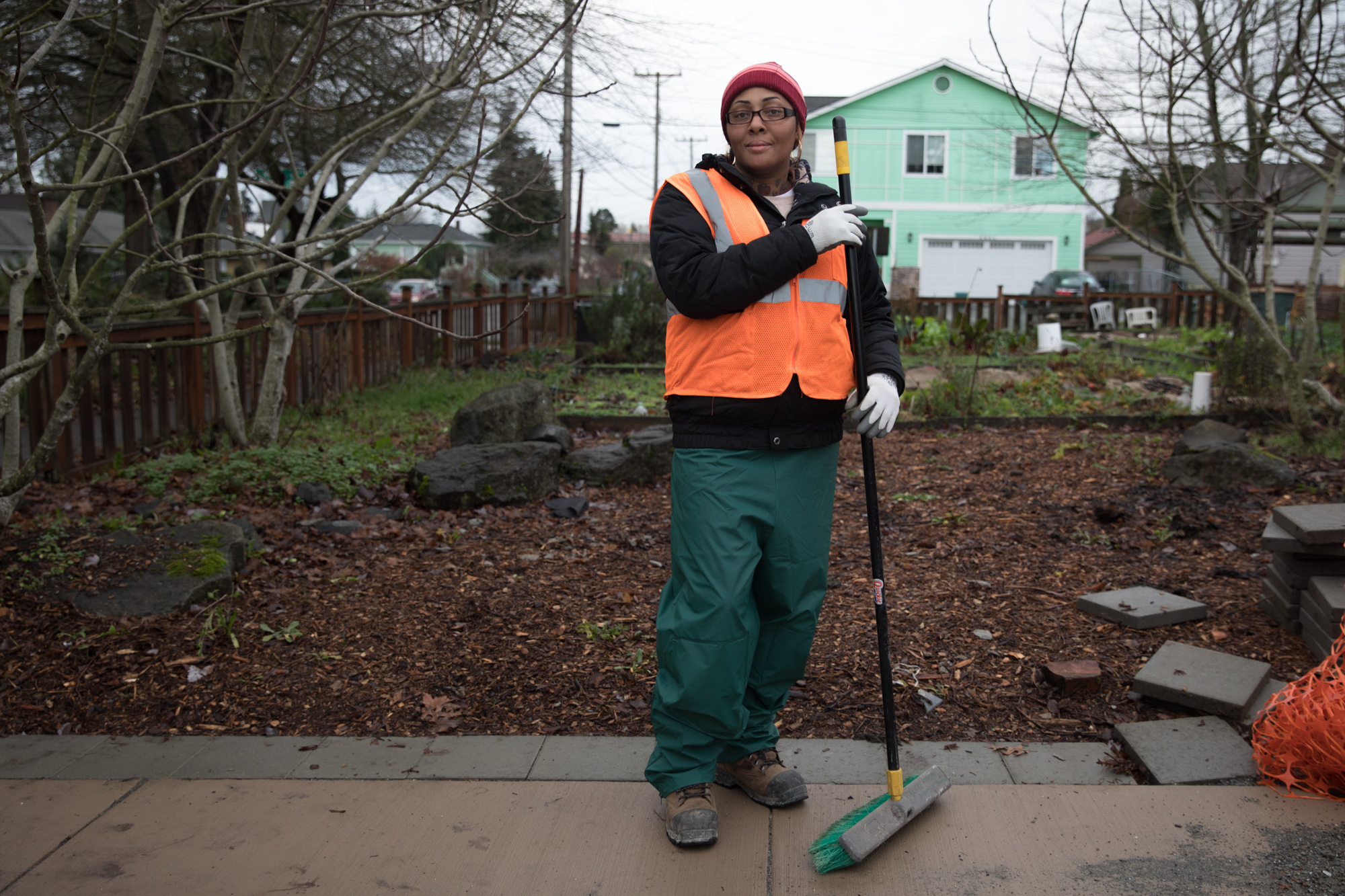 On a recent cold December morning, a crew made up of the formerly homeless drove out to Angel Morgan P-Patch in South Seattle and, in the midst of kale and other sprouting greens, began laying cement.

The goal was to make the garden wheelchair accessible.

With an orange vest and strawberry tattoos on her neck, April Winfrey, a 38-year-old mother of two sons, pushed gravel into the cracks left exposed between cement squares. Winfrey, a former cocaine user who had once been forced to surf couches, said she has been clean now for about a year and a half.

In fact, Winfrey has performed so well in eight months of working in construction with the Seattle Conservation Corps that she is now considered a specialist, a designation reserved for good employees who have learned the tricks of the trade.

“I was scared; the blessings started coming so fast,” Winfrey said of the Seattle Conservation Corps, a program within the Seattle Parks and Recreation Department that provides job opportunities for people living in homelessness. “Blessing after blessing just hit me.”

“Even though I’m the only girl,” Winfrey said of the otherwise all-male crew, “they still don’t give me no slack.”

Explaining why the program, which provides services such as GED classes and resume building, had worked for her, Winfrey said: “If you’ve got a homeless person you can’t just say here, work. You got to build their self-esteem.”

Established in 1986, the Seattle Conservation Corps has been equipping members of the local homeless population with paid apprenticeships in construction, from bricklaying to carpentry to plumbing. The majority of those who join the program are recovering from some form of substance-abuse issue. Every year, the program serves more than 75 adults experiencing homelessness, with most of the cost of the program covered through grants and the work the members do for city departments.

All that hard work has paid off. On Tuesday, the city announced that the Washington State Department of Labor and Industries has recognized the Seattle Conservation Corps as an official preapprenticeship program. That means many graduates can now go straight from the program to union jobs that come with high wages and benefits, representing a drastic change in earning potential for most.

Now Winfrey, who once earned less than $300 a week as a cab dispatcher, is on course to earn approximately $23.50 an hour.

“We’re a great deal for the unions,” said Ruth Blaw, manager of the Seattle Conservation Corps program. “They want our people, and our people want them.”

Blaw said union reps tend to be impressed by the work ethic of corps participants, who often report to the job site early, cheerful and ready to work.

Speaking of the program, James Owens, apprenticeship coordinator with the Iron Workers Union, pointed out that “Seattle Conservation Corps is one of the few preapprenticeship programs that provide a living-wage job during training, removing barriers on the path to apprenticeship.”

Blaw said the program currently has approximately 50 active members. In addition, there is typically a wait list of a few dozen people who hope to get into the Seattle Conservation Corps program as members graduate. The referrals come from a variety of places: shelters, drug court, tent cities. The only qualifications needed to join the program are an ID, Social Security number and a record of homelessness. Candidates must also pass a physical.

“Tackling our region’s affordability crisis means we must build pathways to opportunity and good jobs,” Mayor Jenny Durkan said of the program. The Seattle Conservation Corps “helps ensure that our most vulnerable neighbors have the chance to be part of Seattle’s world-class workforce.”

Blaw said about 10 percent of candidates blow the screening interview because they’re drunk or high, and approximately another 30 percent end up dropping out because they relapse. But “for the people who get clean and stay clean," she said, "everything about their life is completely different.” 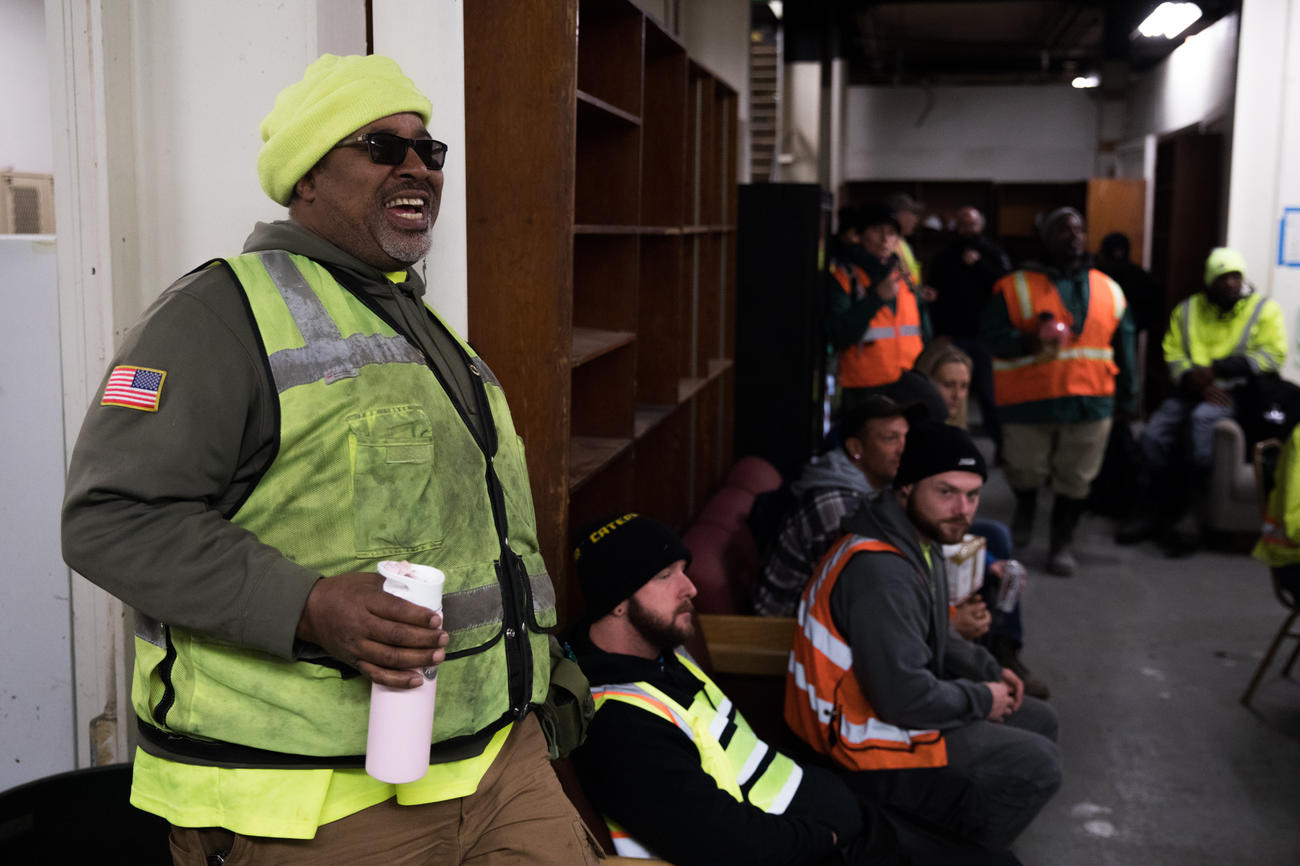 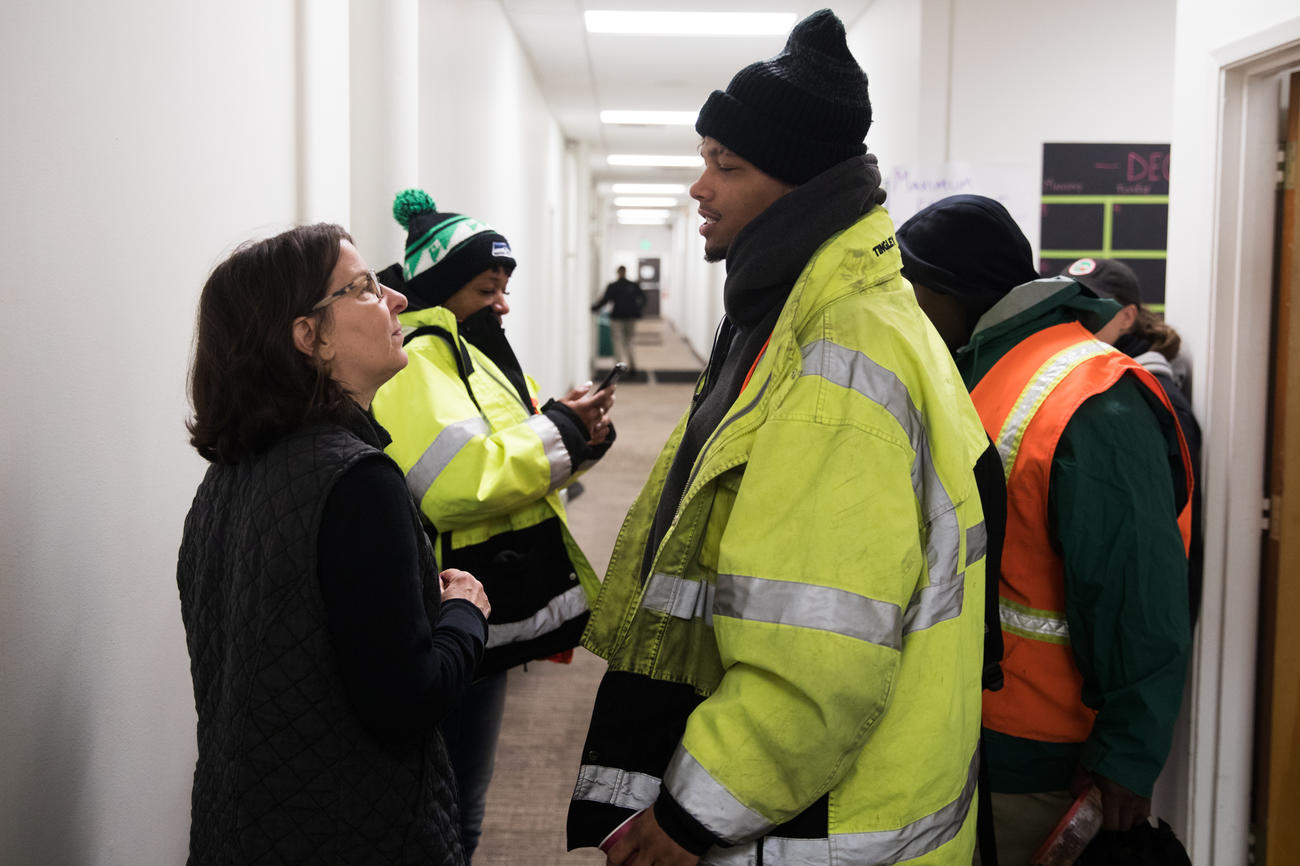 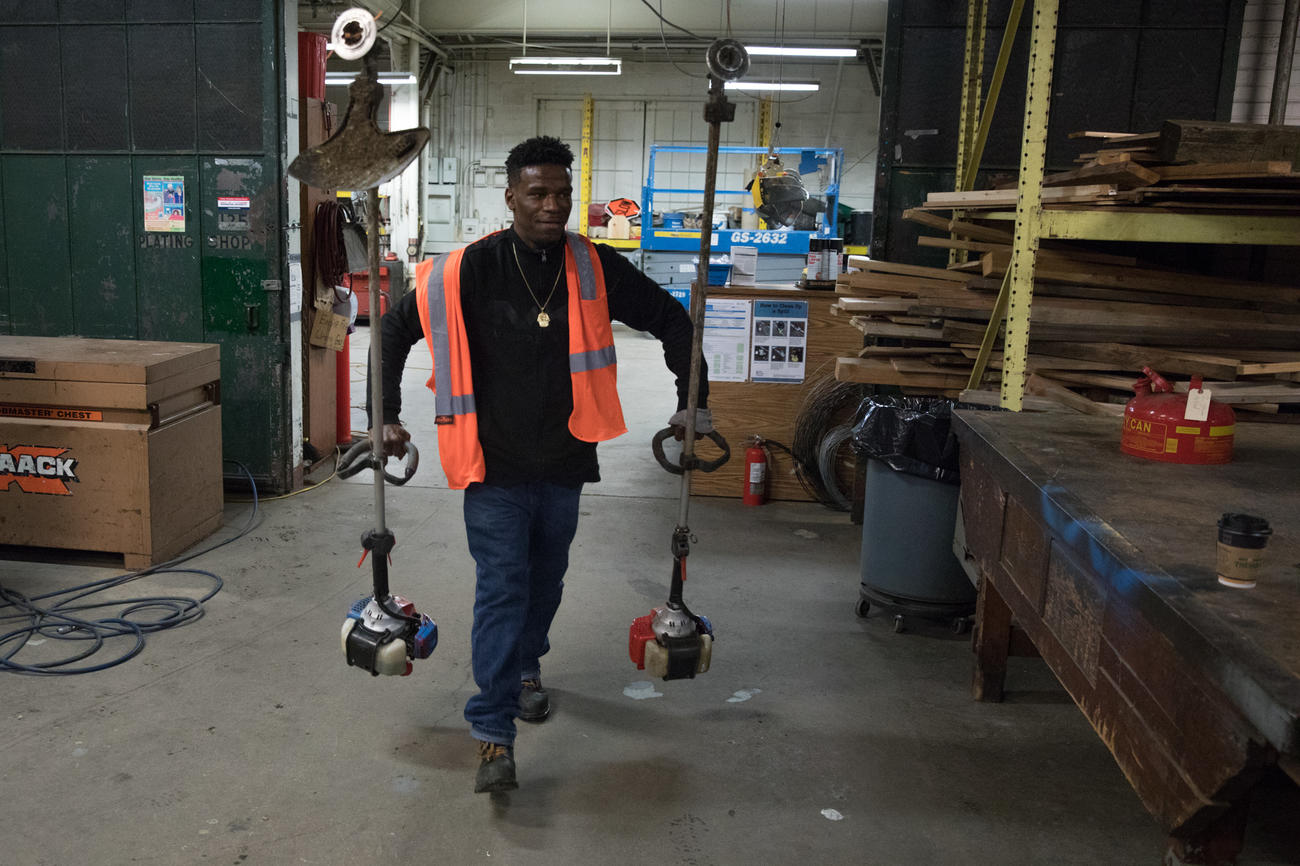 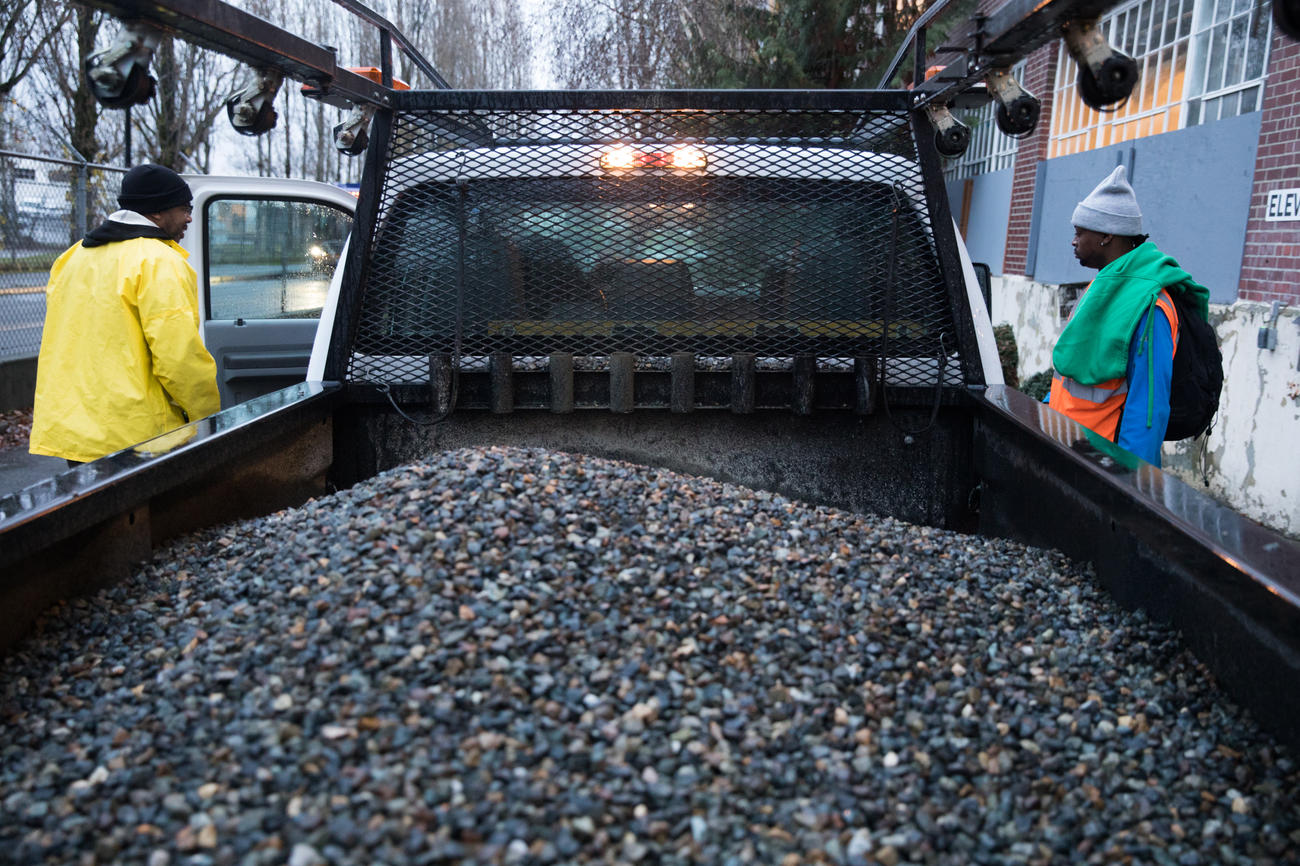 Seattle Conservation Corps crew members prepare to leave for a job site from the organization's headquarters at Magnuson Park in Seattle, Dec. 18, 2018

Seattle Conservation Corps crew members prepare to leave for a job site from the organization's headquarters at Magnuson Park in Seattle, Dec. 18, 2018 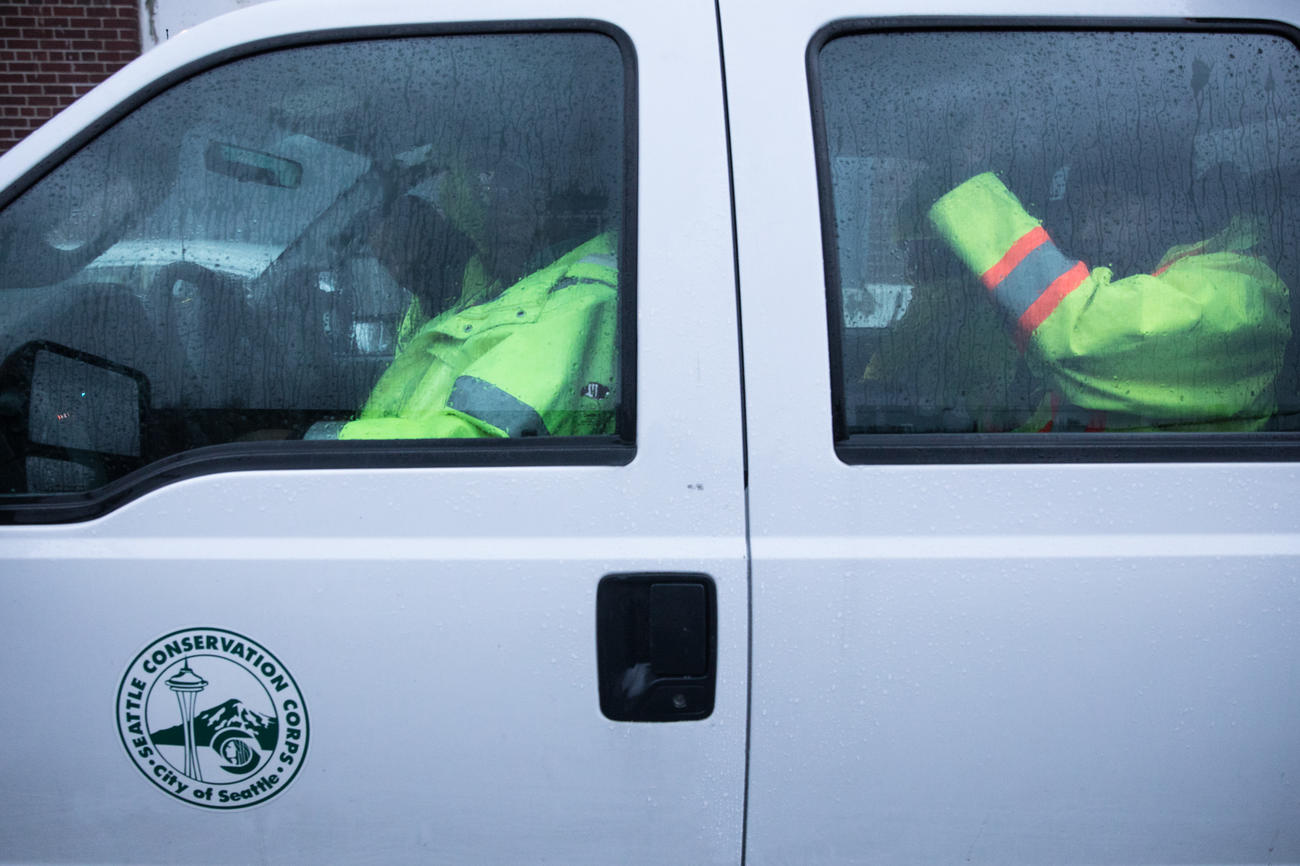 A Seattle Conservation Corps team hops in a work truck and heads to a job site from the organization's headquarters at Magnuson Park in Seattle, Dec. 18, 2018.

A Seattle Conservation Corps team hops in a work truck and heads to a job site from the organization's headquarters at Magnuson Park in Seattle, Dec. 18, 2018. 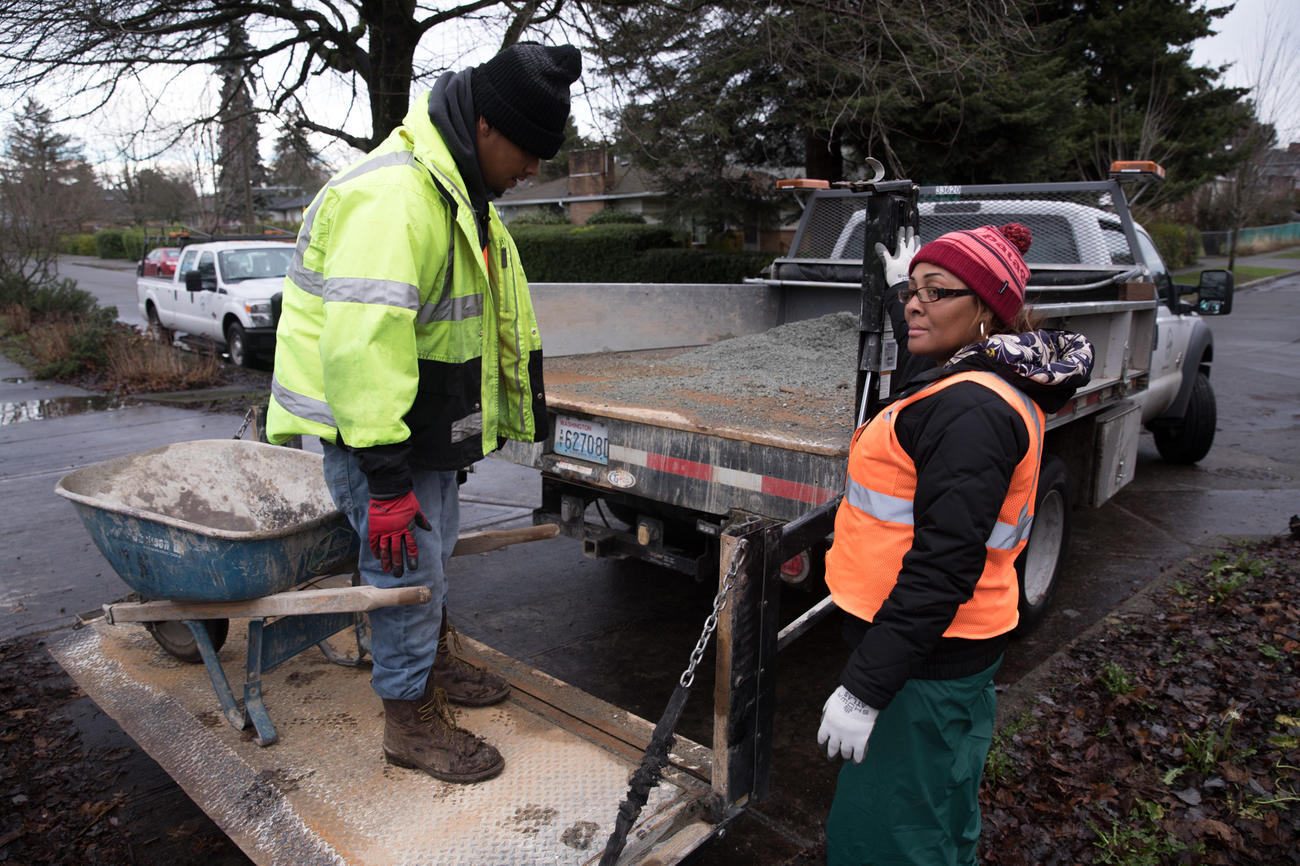 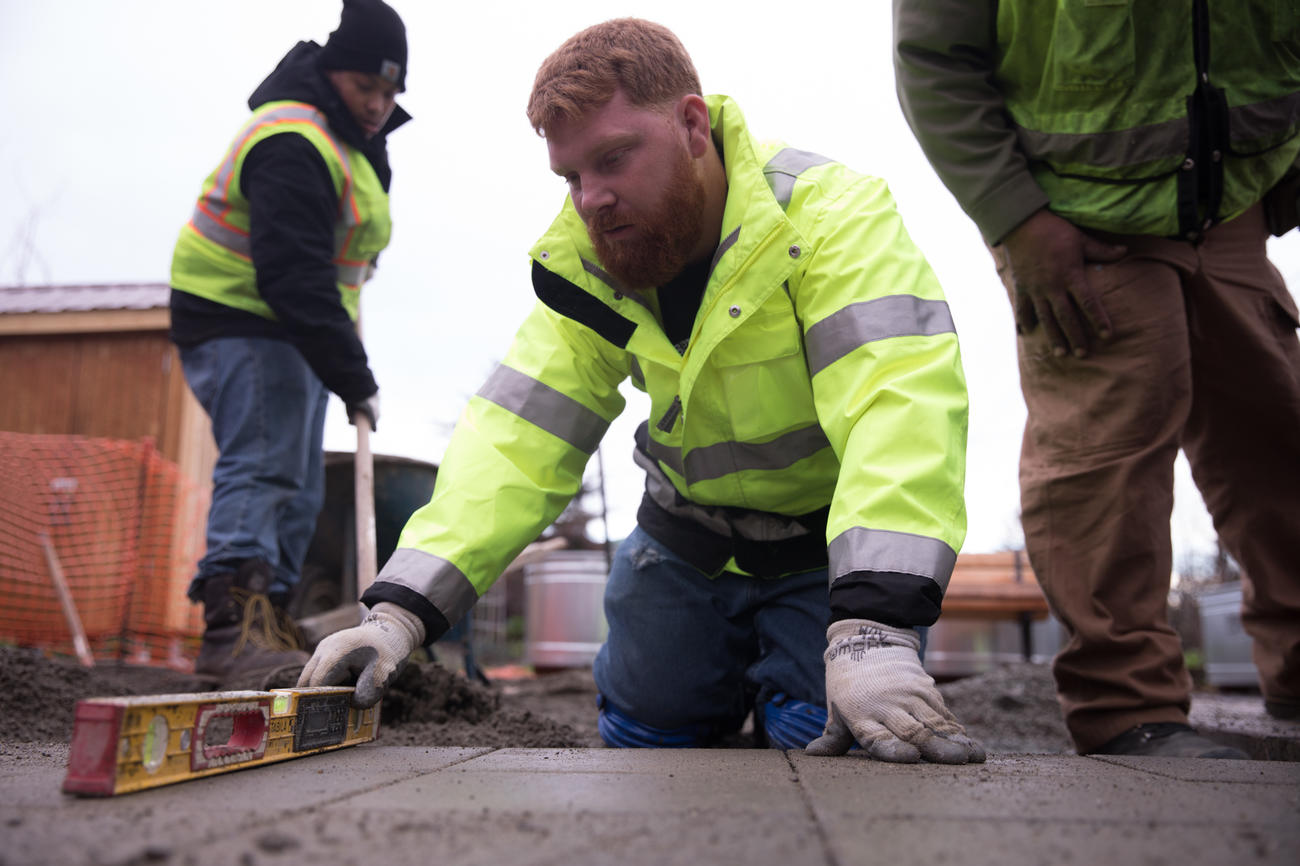 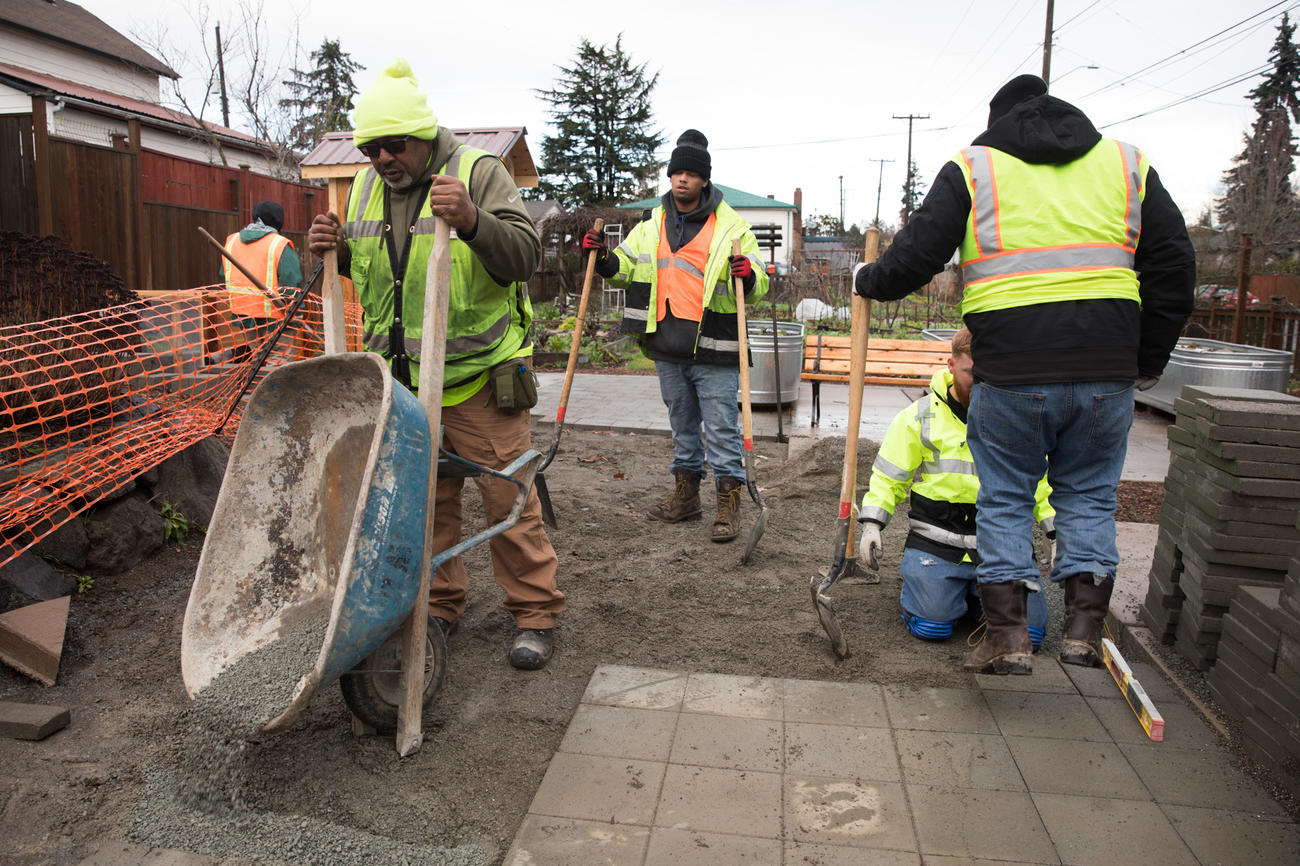 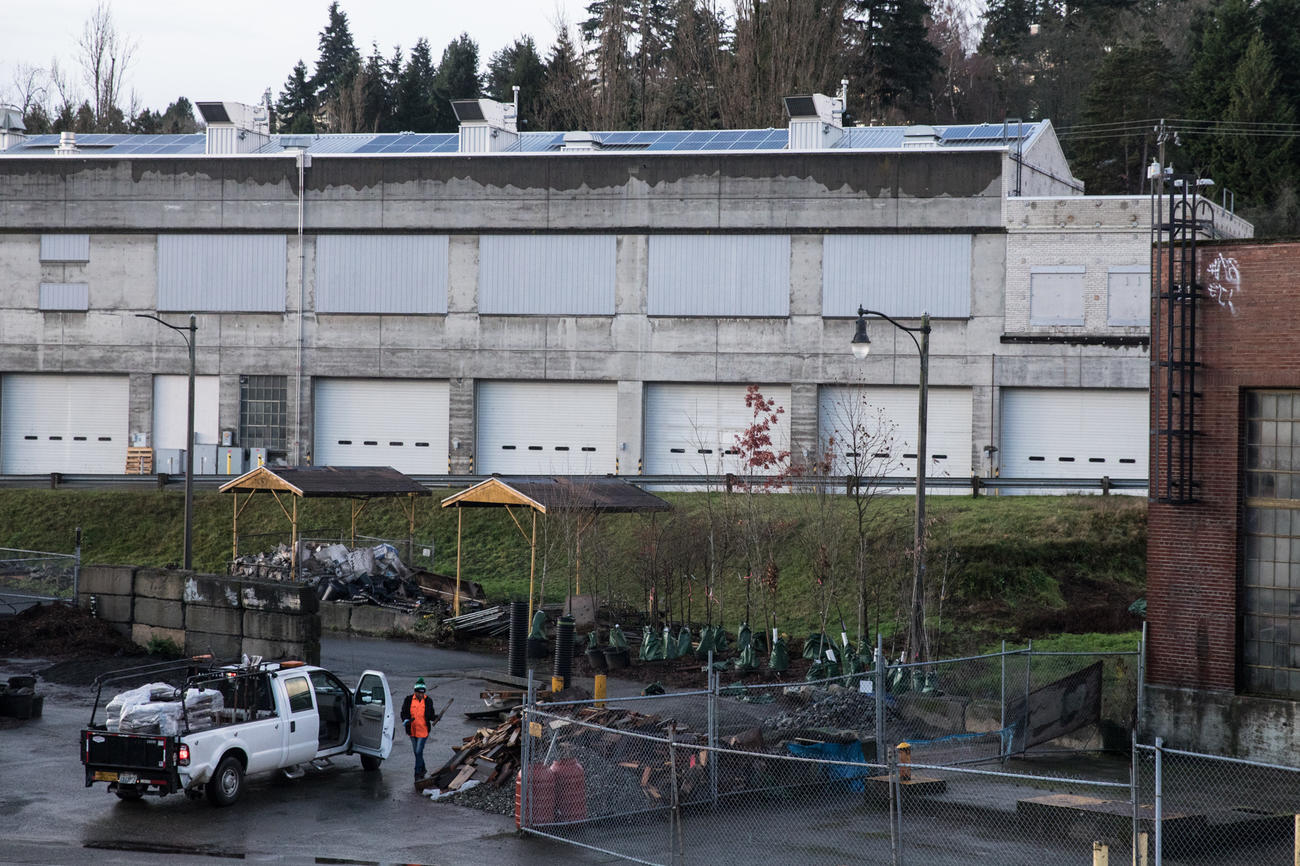 A Seattle Conservation Corps team prepares to leave for a job site from the headquarters at Magnuson Park in Seattle, Dec. 18, 2018.

A Seattle Conservation Corps team prepares to leave for a job site from the headquarters at Magnuson Park in Seattle, Dec. 18, 2018.

On a recent Tuesday morning, dozens of hopeful graduates reported to the city parks and recreation department, located at Magnuson Park. At roll call, members called out what they referred to as “good news.”

One worker talked about being clean for 4 1/2 years. Another spoke about being able to afford Christmas gifts for his son for the first time.

Christopher Townsell, who moved to Seattle from Kentucky in summer 2016 and who now, at 24, helps care for his father in Auburn, said, “I tell everyone I can about the program. Never had a real job besides fast-food.”

Tyanna Coffey, 40, said she’s struggled with alcohol addiction since she was 15 years old but that the work she does now “just gives me a warm feeling inside to be doing good.”

Coffey had at one point left the program for a union job, but decided she wasn’t quite ready. She was afraid the pressure from work, and the lack of life and work balance, would cause her to relapse.

Others, however, jump at the chance of leaving the program early.

“It feels good to see them succeed,” said Carlton Slade, who has worked as a program supervisor for three years.

“Plus I get to put my footprint on parks” and say, “I did that.”