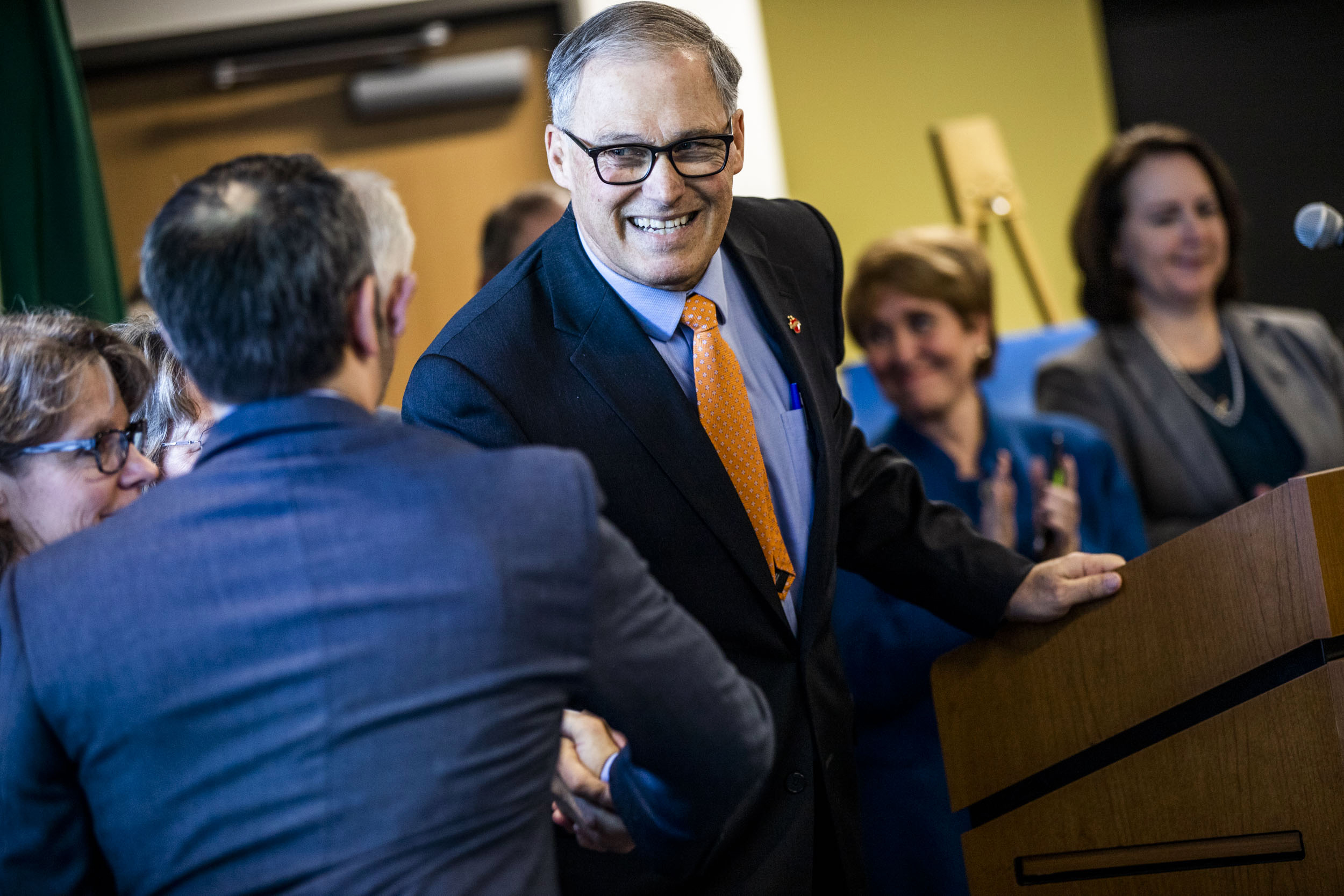 Gov. Jay Inslee announces his clean-energy climate plan during a press conference at the Smart Buildings Center in Seattle on Monday, Dec. 10, 2018. (Photo by Dorothy Edwards/Crosscut)

There was a lot on Jay Inslee’s list on Monday. Standing inside the Smart Buildings Center offices at Pacific Tower in Seattle, the governor announced a slate of policy proposals that would promote clean energy while battling back climate change.

He suggested more efficient hydroelectric dams and grids, a lot more electric cars, and four electric-hybrid ferries. A decade or more from now, he said, there should be a high-speed rail line from Vancouver, B.C., to Seattle to Portland. There was more, as the governor detailed one of the highest priorities of his proposed budget.

But there were some noteworthy omissions. Inslee’s plan lacked a carbon emissions tax. And it did not call for the controversial removal of four Lower Snake River dams between the Tri-Cities and Lewiston, Idaho. Still, Inslee would not rule out Monday that he might tackle either of those measures at a future date.

On Monday in Seattle, Inslee unveiled his clean energy plan to tackle climate change, a $268 million package that he hopes will be adopted during the 2019 legislative session. The subsequent budget bills would be divided among the state’s operations, capital and transportation budgets — meaning a wide number of funding sources would be tapped. Sen. Reuven Carlyle, D-Seattle, and chairman of the Senate Energy, Environment & Technology Committee, said it will be easy to find sponsors for all of the bills needed to implement Inslee’s full package.

Inslee described his package as what can realistically pass a Democrat-dominated House and Senate in the 2019 session.

Sen. Doug Ericksen, R-Ferndale, and GOP point man on energy and environment issues, said Inslee “is gearing up for a presidential bid that stomps on Washington.”

Although he has not made an official announcement, the governor has been taking steps that indicate he is at least exploring a presidential bid. On Monday, Inslee said his national ambitions are unrelated to his climate package. Yet Inslee’s niche in what promises to be a crowded field of Democrats is that he is the “climate guy.”

In the past, Inslee has had insurmountable problems with his biggest climate-fighting proposal — a tax on the carbon emitted by the state’s biggest polluters. Inslee never could get enough Democratic votes in the narrowly Democratic House to move the issue over to the Senate. Some Democrats, fearing backlash for the increased gasoline prices that such a tax would bring, steered clear of fulfilling the governor’s wishes. Voters have rejected the idea as well, with carbon initiatives failing in both 2016 and 2018.

After the November midterms, though, the Democrats now have big enough margins in both chambers to survive a few swing district Democrats voting against Inslee’s bills. Yet Inslee unveiled his “Plan B” Monday without a carbon tax — for now, at least.

Monday’s package “is a giant leap,” he said. “But it will need some additional steps.”

Inslee’s proposal comes at a moment of heightened awareness around climate change. In October, a United Nations report detailed a grim future for humanity, while a recent Trump administration report by 13 federal agencies also warned that climate change is a major threat, although President Trump said — based on his “gut” — that he does not believe the report.

“The best time to address our changing climate was several years ago, but the second-best time is right now,” said Gail Gatton, executive director of Audubon Washington, who joined Inslee on Monday. “Science and subsequent research, including from the Trump administration just last month, shows that our changing climate is the biggest threat to birds and people.”

Ericksen responded:  “Every proposal from Gov. Jay Inslee has zero impact on the climate.”

Carbon emissions have been linked to increasing temperatures around the globe. In Washington state, higher temperatures have harmed the state’s shellfish; rendered inland salmon habitat more inhospitable, affecting Puget Sound orcas, which survive off salmon; messed with snow melts in the Cascade Range, which has complicated irrigation in Eastern Washington; and made forests drier and more susceptible to fires. Health officials also have linked carbon emissions in the air to increased asthma and other lung problems.

Inslee’s plan calls for the Legislature to pass a bill to direct Washington’s Department of Ecology to come up with regulations to require fuel providers to reduce the carbon content in their fuel by 10 percent by 2028 and by 20 percent by 2030.

Chris Davis, Inslee’s policy adviser for climate and energy affairs, said Oregon and British Columbia installed low carbon fuel standards and saw no discernible differences in their gasoline prices. California, which has several taxes affecting fuel prices, concluded that a low-carbon fuel standard could be linked to a gasoline price hike of 3 to 6 cents a gallon. Davis speculated that a Washington low-carbon standard in gasoline would lead to a gasoline price hike of zero to 6 cents a gallon.

Northwestern Washington has five oil refineries, of which two are in Sen. Ericksen’s district. Ericksen has been the oil industry’s leading proponent in the Legislature. He described the proposed low-carbon fuel standard as “a gas tax in disguise” and said a low-carbon fuel standard could lead to a $1-a-gallon gasoline hike. This figure comes from a study sponsored a few years ago by the trucking industry.

Costs of solar and wind power have dropped dramatically since 2009, making those power sources more economically feasible, according to a governor’s office paper. Solar power production has shrunk from $359 per megawatt-hour in 2009 to $43 per megawatt-hour today. Offshore windmills provided electricity at $135 for a megawatt-hour in 2009, compared with $43 today. Inslee proposed to add $4.7 million in tax incentives for solar projects to boost the current fund, which almost has run dry.

“Some utilities are close to 100 decent renewable power. Some are not,” said Rep. Gael Tarleton, D-Seattle.

A big political pitfall for Inslee is that while improving hydropower is a major plank of his climate change plans, he is also boosting the recovery of Puget Sound’s endangered orcas, which eat chinook salmon. A huge number of young chinook salmon — dubbed “smolts” — have to pass through the four Lower Snake River dams and their turbines.

Right now, a huge constituency of Washingtonians wants to remove the four dams, while another giant constituency in Eastern Washington wants to keep them intact for irrigation and for barge traffic.

This is essentially a Sophie’s Choice for Inslee between two of his top priorities.

And on Monday, Inslee dodged a question on whether clean energy or orcas should take priority.

Inslee also wants $3.25 million to study how a governing authority could be created among British Columbia, Washington and Oregon to consider an ultrahigh-speed commuter train rail line that would run from Vancouver, B.C., to Seattle to Portland. The private sector, including Microsoft, would be involved, said Charles Knutson, the governor’s policy adviser for transportation and economic development.

The idea is to cut car traffic — and vehicle emissions — between the three cities.

Washington has done two preliminary studies so far that have concluded that an ultrahigh-speed line between the cities is feasible. The trains could conceivably run at 250 miles-per-hour. A 2016 study concluded such a rail line could support six to eight trains an hour in both directions.

For nearby commuters, Inslee proposes spending $117.5 million to convert two existing ferries to be electric-hybrids and to build two electric-hybrid ferries from scratch. The ferries would be converted or built by 2021, according to figures provided by Knutson.

The state would also spend $2 million for more fast-charging stations for electric cars across Washington. And the state government would try to convert 50 percent of its own vehicles to electric by 2020.

Finally, Inslee’s budget proposal calls for $78 million to be invested to make buildings and homes less dependent on fossil fuels and to use less electricity.