If negotiations don’t pan out, a class-action lawsuit is possible. 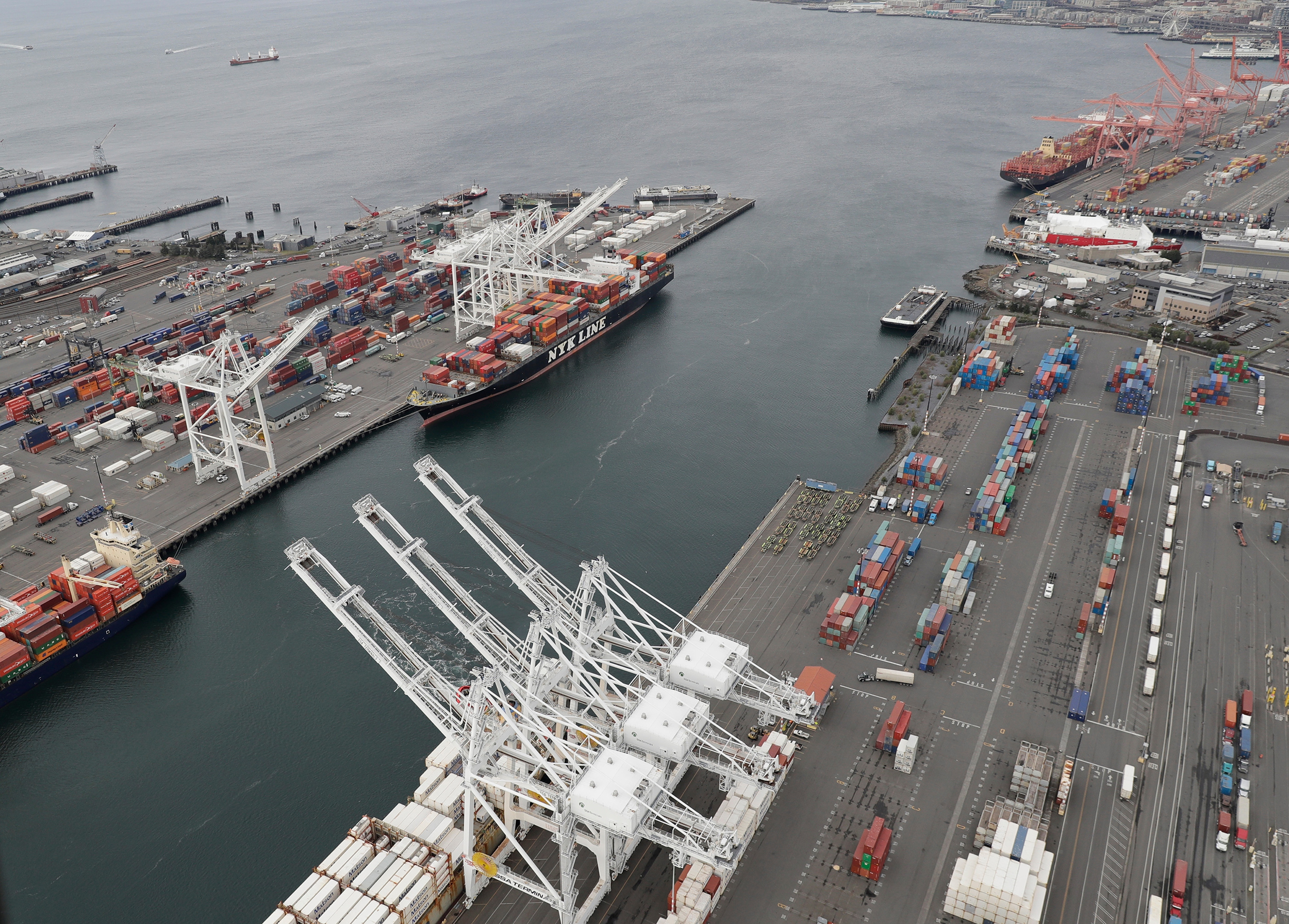 Cargo cranes at the Port of Seattle are shown in this aerial photo, Friday, Feb. 23, 2018, in Seattle. (AP Photo/Ted S. Warren)

A female longshore worker at the Port of Seattle has filed a discrimination charge with the Equal Employment Opportunity Commission, claiming she was discriminated against while pregnant.

The Seattle employee, who has asked to remain anonymous, is the latest dockworker to claim pregnancy discrimination. She joins six other female workers at various West Coast ports who have recently filed pregnancy discrimination charges. The American Civil Liberties Union, the ACLU of Southern California, the private law firm Outten & Golden and Los Angeles attorney Brenda Feigen are representing the women.

The discrimination charge filed Thursday names the Pacific Maritime Association, which represents the shipping and terminal companies that operate the 29 ports along the West Coast, from San Diego to Bellingham. The International Longshore and Warehouse Union (ILWU), which represents approximately 42,000 workers, and ILWU Local 19, the local chapter of the union based in Seattle, are also named in the complaint. Feigen said attorneys are currently negotiating with the unions but added that the women are prepared to file a federal class-action lawsuit if the negotiations don’t pan out.

The Seattle woman said she was so “fearful of losing work hours during pregnancy and falling behind her co-workers in the queue to gain union entry that she worked up until the night she gave birth prematurely, finishing her shift while leaking amniotic fluid,” the ACLU said in a press release.

The Pacific Maritime Association did not return requests for comment. In a statement on Monday, Craig Merrilees, communications director of the ILWU, said "the new charge is false and repeats identical allegations that the ACLU made in early 2017 concerning Southern California ports, which the industry has responded to and the EEOC has not acted upon."

"In the Southern California case, the longshore industry gave the EEOC indisputable evidence that, contrary to ACLU claims, the industry treats female workers, who miss work due to pregnancy, exactly the same as workers with injuries or other conditions that prevent them from working," Merrilees said.

"Neither group receives any lost time credit for missing work, just like in all other industries. The only exception is for female and male military veterans who receive lost work credits for military service leaves of absence, as required by federal law, specifically, the Uniform Services Employment and Reemployment Rights Act."

“It’s unfortunate that the ACLU ignored these facts, in what seems like an effort to manufacture public outrage based on misinformation.  The ILWU intends to remain focused on the facts, the law, and we will continue treating women and men equally,” he said.

The women claim the unions treat workers who miss work due to pregnancy and postpartum care differently than those who miss because of on-the-job injuries and military service, violating the Pregnancy Discrimination Act. Unlike those other workers, pregnant women are not able to apply the time they miss toward the hours required to become full-time members of the union and to attain higher wages.

Attorney Feigen said of the women filing charges: “We’re trying to be the same as they are. We’re not trying to have special privileges.”

The women are among approximately 300 to 400 individuals in the casual workforce at the Port of Seattle and the thousands more casual laborers employed at West Coast ports. Many workers represented by the ILWU enjoy six-figure salaries and benefits (with skill bonuses and overtime, full-time workers earn an average of $175,000), but thousands of other workers on the docks are not members of ILWU and are therefore not guaranteed hours. They remain on standby and work on an as-needed basis.

“It’s a really hard way of life. There’s a lot of uncertainty,” said Gillian Thomas, an attorney with the ACLU.

Although the lowest rung on the hierarchy of workers at the ports, so-called “casuals” can become members of the union over time if they accrue an unspecified number of hours and maintain a clean disciplinary record. What’s more, casuals are entitled to wage increases based on their aggregate hours. According to the complaint, for example, workers who have worked 1,000 hours earn $29.49 an hour, while those who have worked more than 4,000 hours earn $40.93.

The discrimination charge also notes that casual dock workers are unable to request any kind of accommodations while pregnant or soon after having a child, including accommodations for breastfeeding.

The charge specifies that a breastfeeding woman is “denied access to a sanitary, private space in which to pump breastmilk during her shift — prompting her either to stop breastfeeding long before she may want to or her baby may have received all of the potential health benefits of breast milk, or to forgo working altogether, during which time she does not receive any work hours credit.”

Thomas said that while lawyers are open to negotiating with the unions, for now the women who have filed charges remain “really fearful of backlash from colleagues and superiors.”