If upheld, the decision means housekeepers and other staff won’t get panic buttons, health-care subsidies. 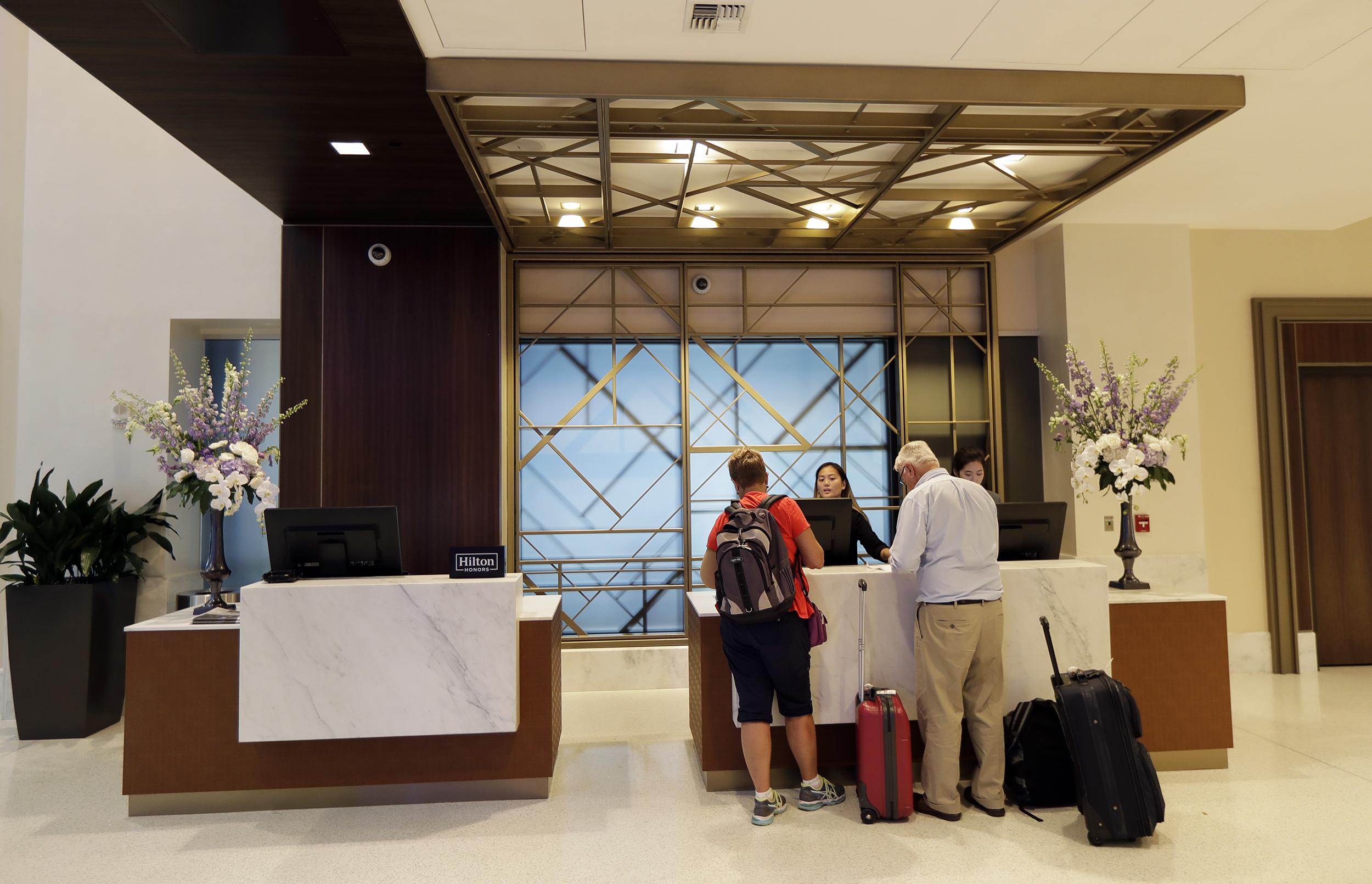 Guests stand at the front desk at the Embassy Suites by Hilton hotel in Seattle's Pioneer Square neighborhood in Seattle on Wednesday, Sept. 5, 2018. The hotel is represented by the Seattle Hotel Association, one of three groups that have sued the City of Seattle over I-124. (AP Photo/Ted S. Warren)

The Washington State Court of Appeals on Monday struck down Seattle’s broad protections for hotel workers that had been approved overwhelmingly by voters through an initiative in November 2016.

I-124’s seven parts do not have a “rational unity” and therefore should not have been combined into one initiative, the court ruled.

The lawsuit was brought by the American Hotel and Lodging Association, the Seattle Hotel Association and the Washington Hospitality Association. Monday’s decision overturns a lower court’s ruling.

The initiative, also referred to as the Hotel Employees Health and Safety Initiative, was placed on the ballot by UNITE HERE Local 8, a union representing hotel workers. It passed with more than 75 percent approval.

The ballot measure is most well-known for its provision requiring large hotels to provide panic buttons, to be used by hotel workers in the event of an assault or harassment.

But the initiative goes further. Most controversially, it requires hotels to maintain a list of guests who have been accused of sexually assaulting or harassing hotel workers and to forewarn workers if that guest was staying in the hotel. The guests are to remain on the list for five years.

It also requires hotels to pay workers time and a half if they clean more than 5,000 square feet in an eight-hour shift. If a hotel undergoes a change in management, the new managers must hire existing workers in order of seniority. Hotels also must provide certain safety equipment. And the initiative requires hotels to provide a health-care subsidy to its workers.

An initiative may have multiple provisions, but they must be encompassed within the initiative’s title and be logically bound to one another. The court determined, in this case, the pieces of I-124 were too disparate from each other to hold up under the city’s single subject rule.

The court wrote that I-124 “identifies at least four distinct and separate purposes” and found that “the purposes of the operative provisions ... are completely unrelated.”

By way of example, the court wrote, “requiring hotels to maintain a list of people who have been accused of sexually harassing hotel employees is unrelated to limiting the number of square feet a hotel worker can be required to clean in an eight-hour period without being paid overtime, or requiring a hotel to create a seniority list from which a new owner must hire employees for a period of time after a change in ownership.”

In a statement, Abby Lawlor with UNITE HERE said, "We couldn't disagree more strongly with the Court of Appeals decision and will be working with the City to ensure that the will of Seattle voters is upheld and the needs of Seattle hotel workers are met."

A spokesperson for the City Attorney’s Office said in an email, “We’re reviewing the decision and assessing our options for next steps.” That could include appealing the ruling to the state Supreme Court.

Lisa Leinberger with the Seattle Hotel Association said in an email, "Seattle hotels remain comitted to a safe, healthy work environment that respects the rights of both our employees and our guests. We’re pleased with today’s ruling in the Court of Appeals. Initiative 124 threatened that commitment, impeding the industry’s ability to manage and provide opportunities to its workforce, while violating the rights of our customers."

I-124 is also facing a separate lawsuit in federal court from the ERISA Industry Committee, which contends that the provision requiring hotels to provide health-care subsidies violates the Employee Retirement Income Security Act (ERISA) of 1974. The city has agreed to not enforce the health-care portion of the law until September of next year or until the lawsuit has been decided.