Guards with Securitas were looking for a White vandal. Instead, they targeted the Seattle woman. 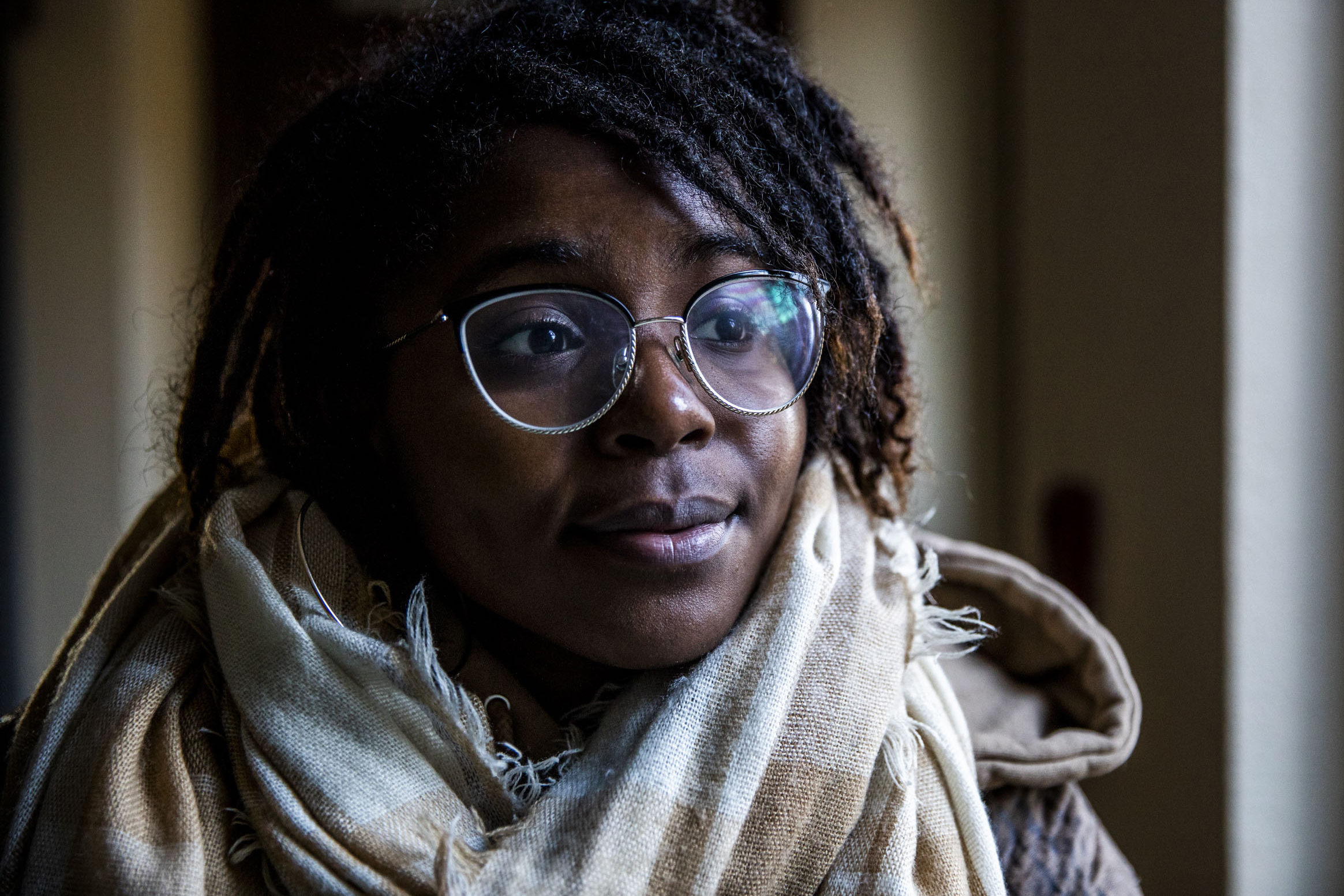 Seattle University senior Mahogany Montgomery in her University District apartment building on Tuesday, Dec. 4, 2018. Montgomery settled with Sound Transit and Securitas for $2,800 after she was wrongfully removed from the University District light rail station in August. She claims she was racially profiled. "I want to see more people advocate for themselves," Montgomery says. "People won't always do the right thing the first time. People do have prejudices." (Photo by Dorothy Edwards/Crosscut)

This past August, Mahogany Montgomery was on her way from Seattle to New York to attend a music festival. Her flight was early, so she was at the University of Washington light rail station at around 4:30 a.m., waiting for the first train to arrive.

While she waited, her luggage at her feet, she saw out of the corner of her eye security guards from Securitas, the multinational company that contracts with Sound Transit, the regional transit authority that operates the light rail. As the guards inched toward her and moved to within just a few feet, Montgomery said she heard their walkie-talkies rattle “go now.” They approached her and told her she needed to leave.

Montgomery asked them why, but the guards declined to say. She pulled out her phone to record and continued to ask them why. The guards maintained their silence as they escorted her into an elevator and up onto street level. She missed her train and was forced to take a $40 Uber to the airport.

Securitas and Sound Transit now acknowledge that Montgomery should not have been kicked out of the train station. Securitas removed Montgomery in response to a report of vandalism allegedly committed by a White woman wearing red gloves. Montgomery is a 25-year-old Black woman. The only possible similarity was that Montgomery was also wearing red — but on her feet.

“I don’t understand how you can go from it being a White person and you pick out a Black person,” said Montgomery. “I’m a dark brown person and I have dreadlocks. I’m Black. That’s racial profiling.”

After Montgomery went on social media to post about the incident, a friend encouraged her to file a complaint. She did.

According to Sound Transit spokesperson Geoff Patrick, both Sound Transit and Securitas conducted separate investigations after receiving Montgomery’s complaint. Both “concluded that our contracted security officers mistakenly and inappropriately directed Ms. Montgomery to leave the University of Washington light rail station,” said Patrick. “Radio miscommunications between the company’s staff regarding an act of vandalism that had occurred earlier at the facility, which in no way involved Ms. Montgomery, resulted in Ms. Montgomery’s unacceptable experience.”

After several meetings with Sound Transit security operations, Montgomery agreed to a settlement of $2,800 with Securitas in late October. Securitas also demoted one of the staff members involved in the incident, and the other resigned.

Montgomery’s ejection from the Sound Transit station comes on the heels of several high-profile incidents of Black people being kicked out of public spaces and businesses for no discernible reason. Starbucks shut down its stores across the country for anti-bias training after two Black men were arrested in a Philadelphia store while waiting for a business meeting. A version of this story played out recently in Kirkland when a Menchie’s store owner called the police on a Black man, who, as a court-appointed special advocate and special supervisor, was escorting a mom and her child to get frozen yogurt.

Montgomery said she absolutely believes she was targeted because of her race. The feeling was scarring. “I felt like my rights were violated,” she said. “Someone in a uniform telling you can’t do something without telling you why is oppressive.” 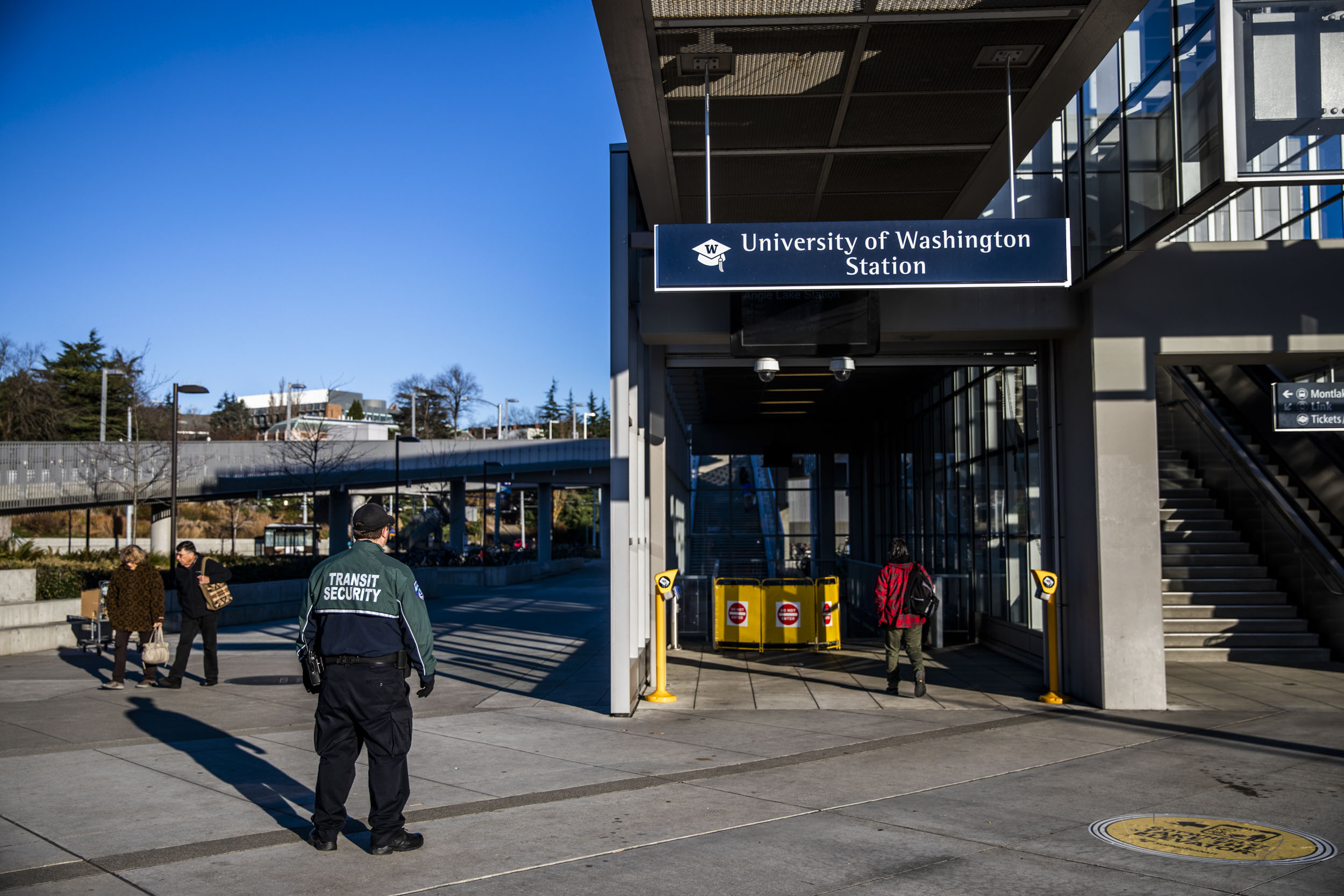 Montgomery is a busy person. She’s in school full time at Seattle University, pursuing a bachelor’s degree in organizational leadership. She also works as a lead coordinator with the South King County Discipline Coalition, a community organization working to find alternatives to the school-to-prison pipeline. On top of all that, she also interns with 4Culture, a county-funded organization that supports local art.

She also worked for the City of Seattle for three years as a utilities account representative.

“I’m working my butt off trying to make a difference for myself,” she said. Securitas’s actions, however, represented “everything I’m working against.”

Sound Transit relies on the King County Sheriff’s Office for much of its security needs. The workload, though, is too much for that office alone, which has required the agency to contract with the private sector. “The level of security we provide would not be possible using just law enforcement,” said Patrick.

Sworn officers go through months of training, which, as scrutiny of law enforcement has increased, has included more de-escalation, anti-bias and crisis intervention training. King County has a dedicated sales tax revenue stream that, in part, funds crisis intervention training for officers. Security guards in Washington state, on the other hand, are only required to go through eight hours of training.

The incident with Montgomery, he said, was an outlier. “The situation with Ms. Montgomery unfortunately presented a rare instance when training and protocols were not adhered to, with an unfair and unacceptable consequence for Ms. Montgomery,” he said. “Following this incident Sound Transit and Securitas worked with staff to reinforce the importance of training, the observance of operating protocols and the exercise of appropriate judgment.”

A local Securitas spokesperson deferred to the national office, which did not respond to Crosscut’s request for comment.

Securitas has had a few stumbles in its transit security services. In 2011, shortly after it took over the King County Metro contract from a separate security company, which had failed to act during an assault, Securitas was cited for providing inadequate training. In 2013, a guard was caught taking voyeuristic pictures of women. In July, a guard was oddly sporting an Immigration and Customs Enforcement badge. In September, guards were involved in an aggressive arrest of a rider.

More broadly, the King County Auditor's Office recently raised questions about inequities in fare enforcement, which Securitas helps to carry out for King County Metro. In its response to the audit, the office of King County Executive Dow Constantine pledged to include new social-equity requirements for fare-inspectors after the contract with Securitas expires this year.

Montgomery made it to her flight and to the music festival in New York. Still, the experience had the effect of making her feel guilty about something she knows she didn’t do. “I didn’t ever think they’d just kick me off for no reason,” she said. 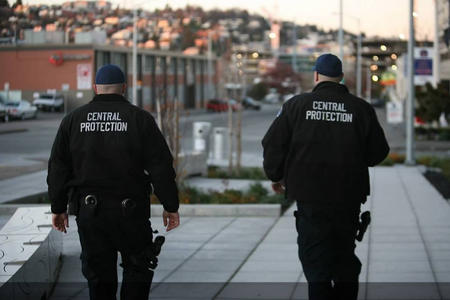