It’s not Darcy and Lizzy. Jane Austen and her readers are the true timeless love story. 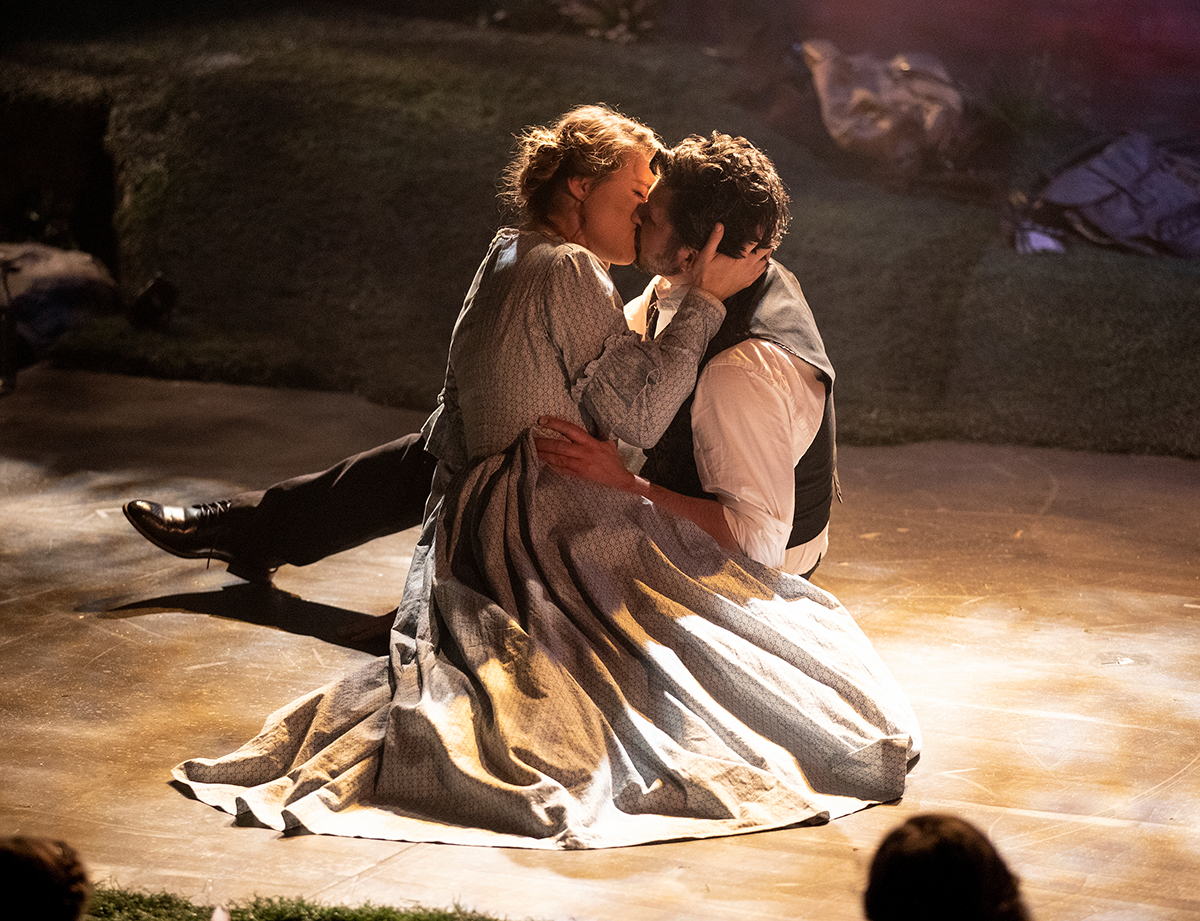 Across the West Seattle Bridge at ArtsWest Theatre, a young woman sings of her new-found freedom working at the manor house of a mysterious employer in the Broadway musical, Jane Eyre.

Over in Greenwood at Taproot Theatre, the Bennet sisters are spending a jolly holiday at a country estate in Miss Bennet: Christmas at Pemberley. They gather round a brightly decorated Yuletide tree (before that was a common British tradition). And romance is in the air.

But consider this, dear reader: Charlotte Brontë’s novel Jane Eyre, about the transformation of a poor young governess, was first published in 1847. And Miss Bennet: Christmas at Pemberley is inspired by Pride and Prejudice, Jane Austen’s portrait of Elizabeth Bennet and her several sisters in their quests for love and marriage that came into print in 1813. Both authors were daughters of clergymen, educated at home, and penned their manuscripts with quills dipped in wells of ink. Neither wrote under her own name, since “author” was not then deemed a proper or credible occupation for women. Austen’s works were initially attributed to “Anonymous,” and Brontë’s to the pen name Currer Bell.

Though each novelist enjoyed some literary success in her day, neither could possibly have imagined their popularity 200 years later — or the multitude of stage/screen/digital media spinoffs they’ve generated. Modern interpreters freely add to, subtract from, embellish and parody the tales — while retaining the central attributes of cultivated language, keen observation and a sharp-witted, strong-willed woman’s longing for, as Austen might put it, a suitable “attachment.”

Hollywood’s first film version of Pride and Prejudice, released in 1940, starred a dashing young Laurence Olivier as the aloof and ultrarich single guy Darcy opposite Greer Garson’s Elizabeth Bennet, the witty, spirited and independent-minded daughter in a genteel clan of modest means (much like Austen’s own). The several screenwriters (including Aldous Huxley) subbed a fair bit of Austen’s clever, astute prose with less scintillating dialogue of their own invention.

More faithful renderings came along, inevitably, via the BBC TV series that began in the 1950s — some successfully exported to the United States via Masterpiece on PBS. These generally preserved more of the book’s conversation and plotting. (Yes, stuff does happen besides tea-sipping and fancy-dress balls.)

The best of the lot is the six-episode, 1995 P & P adaptation that aired on cable and featured Jennifer Ehle and Colin Firth. It captures Austen’s elegantly contoured satire and her questioning of gender roles and class distinctions in a society rigidly defined by wealth and breeding, where marriage was not a choice for women but a destiny. (The series also provides scrumptious eye candy).

And why does Austen’s tale still stick with us? Apart from her authorial prowess, is it just escapist nostalgia for a pastoral, prettified, aristocratic Britain that Downton Abbey fans also lap up? Or our timeless fascination with rites of courtship? Here’s another reason: all those spinoffs that keep the exploits of Elizabeth and her sisters — and Jane and her turbulent romance — front and center.

Consider the success of reworkings such as Bride and Prejudice, a 2004 Bollywood version. And Pride and Prejudice and Zombies, a 2009 parody/homage novel by Seth Grahame-Smith, and its 2016 movie knockoff, which piggybacked on the weird pop-cult lust for zombie-lit. In this telling, the Bennet sisters are martial artists fending off the undead, including some of their suitors.

Among the many (at least 100) freewheeling novel updates of P&P is Curtis Sittenfeld’s recent best-seller Eligible. There’s also online fan lit galore, with Austen addicts raiding her stories and characters for variations like French Fries and Prejudice and Snowbound with Darcy.

Even the masterful mystery writer P.D. James conjured her own sequel, Death Comes to Pemberley, set at Darcy’s estate after he and Elizabeth wed.

P & P has had a long run in the theater, too, including an overly slapsticky sendup by Kate Hamill presented last season at Seattle Repertory Theatre.

The new Miss Bennet: Christmas at Pemberley at Taproot Theatre is a kind of stage fiction in the rom-com genre. Playwrights Lauren Gunderson and Margot Melcon imagine happily wed Elizabeth hosting her nerdy younger sister Mary for the holidays. The house party includes other Bennet sibs and Darcy’s distant relation Arthur De Bourgh — who just happens to be loaded, single and as big a science geek as Mary.

Taproot’s production, directed by Karen Lund, is handsomely mounted. The cast sustains the right level of clever politesse, with many winks at refs to P & P and twinkles of 21st century feminism in Mary’s refusal to dumb down her superior intellect to catch a man. It’s a pleasing if rather languid entertainment, a Yuletide alternative to A Christmas Carol for Anglophiles that more than a dozen regional theaters have already snapped up.

Jane Eyre The Musical continues at ArtsWest through Dec. 23 (Tickets start at $20)

While Austen’s sparkling comedies of manners are beloved, she’s had some harsh critics — including Charlotte Brontë. In an 1884 letter to a friend, Brontë wrote off Pride and Prejudice as a “carefully-fenced, high-cultivated garden with neat borders and delicate flowers; but no glance of a bright, vivid physiognomy, no open country, no fresh air, no blue hill, no bonny beck. I should hardly like to live with her ladies and gentlemen in their elegant but confined houses.”

Brontë’s Jane Eyre appeals on a more visceral, dramatic level. It’s no house party, but a tempestuous odyssey across the stormy moors. In the engrossing novel the impoverished, plain-Jane Yorkshire lass endures a brutal orphan school before finding a better life, and a complicated love interest, in the employment of a seductively enigmatic nobleman, the Byronic Mr. Rochester.

This passionate saga was a radical leap for fiction. By having Jane narrate her own story and emancipation, Brontë freed up the first-person, unaristocratic female voice in Western literature. And she blended a gothic mystery with a fiery romance and a critique of the great gulf between Britain’s moneyed gentry and abused poor.

With action-packed storyline and iconic characters, Jane Eyre was swiftly adapted for eight silent films, and later more than 30 “talkie” movies and TV series. The part of Jane is a plum for those who’ve played it, from Joan Fontaine to Ruth Wilson (The Affair). And screen stars from Orson Welles to Timothy Dalton to Michael Fassbender have taken on that moody hunk, Rochester.

There are many literary updates, sequels and also a brilliant prequel (Wide Sargasso Sea by Jean Rhys) too, along with half a dozen ballets, at least one opera, a symphony and a recent web series on YouTube (The Autobiography of Jane Eyre).

We’ve had two Seattle Jane Eyre stage productions this season: one in the fall from Book-It Repertory, featuring a mismatched pair of leads. But the love chemistry sizzles in the musical version running through Dec. 23 at ArtsWest. Written by John Caird, with a score by Paul Gordon, the show’s 2000 premiere on Broadway fared so-so, but it has been rewardingly revised into an intimate chamber work that fits well in ArtsWest’s snug environs.

While the music isn’t especially memorable, it expresses the intense emotions of Jane’s epic journey, and is beautifully sung by Chelsea LeValley as a compelling (if not at all plain!) Ms. Eyre, and 5th Avenue Theatre favorite Louis Hobson as a smoldering Rochester. Under Mathew Wright’s supple direction, a versatile cadre of eight singer-actors nimbly tackle all the supporting roles.

Offstage, you can tell Bronte’s heroine is a modern superstar with all the Jane Eyre-themed tea soaps, T-shirts, purses and coasters available for purchase online. And there’s even more Pride and Prejudice merchandise available — mugs, scarves, stockings, and for that special someone, Jane Austen toothpaste from Archie McPhee’s.

Or — what a concept! — you could just find and read the original novels by Austen and Brontë. They’ll always be in print. And free online.

This story has been corrected with Charlotte Brontë in the headline. The original version of this story misidentified Emily Brontë as the author of Jane Eyre.