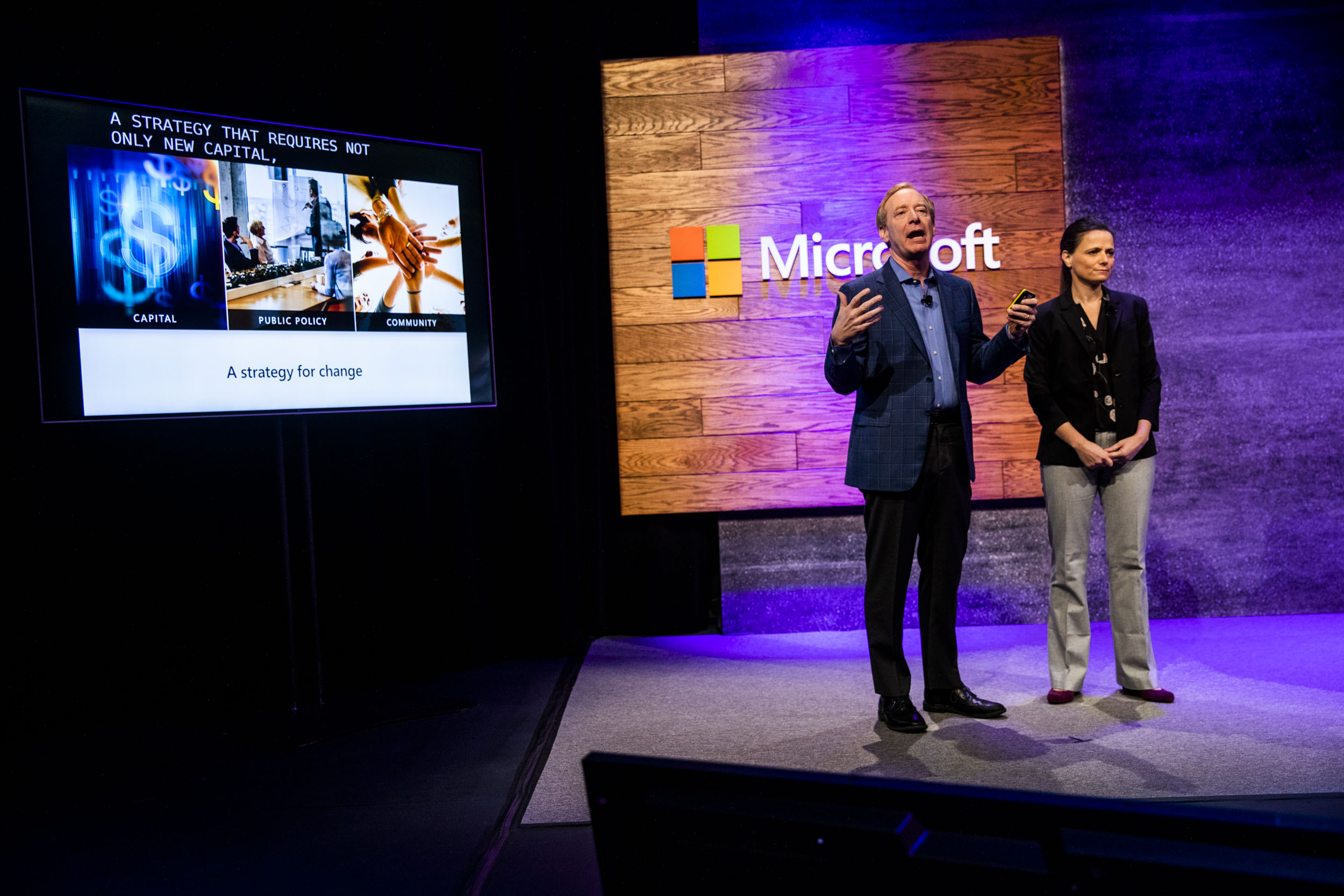 Microsoft President Brad Smith and Chief Financial Officer Amy Hood address the media and community leaders during a press conference Thursday, Jan. 17, 2019, at the Bellevue Youth Theatre, where they announced the $500 million Microsoft is committing to affordable housing issues in the Puget Sound region. (Photo by Dorothy Edwards/Crosscut)

Amidst a growing consensus that the Seattle area is experiencing a housing and homelessness crisis and a broad sense that solutions to it have come too slow, Smith announced the company’s plans to invest $500 million in affordable housing in King County over the next three years.

The money mostly will come in the form of loans to for-profit and nonprofit housing developers to build below-market-rate housing for low- to middle-income residents.

Reactions from affordable housing providers and advocates were largely positive.

“It’s more than a little bit exciting,” said Villette Nolon, chief executive officer of Imagine Housing, the largest nonprofit housing provider building subsidized housing in Eastside cities. “I think this is going to change the conversation in the region. … The Eastside has fallen far behind in workforce and low-income housing and now has a higher need than other parts of the county. It feels much more hidden here, but need has increased exponentially over the last four years.”

Marty Kooistra, executive director of the Housing Development Consortium, echoed that sentiment in an emailed statement: "We are thrilled with the leadership Microsoft has demonstrated with this investment. The need in our region is tremendous and it’s going to take leaders from all sectors embracing a collaborative mindset that owns the reality that we all have a role to play.”

But there are some concerns within the community.

Nolon said she’s still worried about the public’s buy-in, given how hard many communities fight to keep cities from allowing construction of new affordable housing developments. “Unless you have the public policy and the will of the community to help,” she said, “it’s always going to be an uphill battle.”

Other Eastside advocates worry that Microsoft’s focus on housing for middle-income residents could overshadow the tremendous and growing need for supportive housing that people exiting homelessness can move in to.

Linda Benson is director of community development at the Sophia Way, a Bellevue nonprofit providing shelter, housing and services to homeless women. She said the number of women the organization serves has grown significantly in recent years. “The funding does not increase, yet we are serving a lot more women with greater needs,” she said.

Benson wants to see significant investment in building permanently supportive housing for homeless residents, many of whom struggle with addiction and mental-health problems. Without that supportive housing for people earning 0 to 30 percent of area median income, Benson said, the cycle of poverty and homelessness cannot be broken. “The reason we are where we are is 40 years of disinvestment in housing at all government levels,” she said. “But it is pretty cool to see that Microsoft has decided it is good corporate policy for their shareholders [to make this pledge].”

The $500 million pledge is unquestionably large — it is the largest in the company’s 44-year history — and Smith said he hopes it can be leveraged to build tens of thousands of units of housing in the coming years. But that is still just a fraction of the money needed to address the region’s housing crisis, a fact that helps put the scale of the problem into perspective.

Rents and home prices have skyrocketed as the region’s population growth outpaces construction of housing nearly 3 to 1. A recent report from the Regional Affordable Housing Task Force — a joint effort between King County, cities in the Seattle region and other affordable housing stakeholders — found that about 156,000 households in King County are cost-burdened, meaning they spend more than a third of their income on rent or mortgage.

To get that number to zero as the population continues to grow, the task force estimates the county needs to build 244,000 new units of housing by 2040, at least 88,000 of which would need to be rented or sold at below market rates. Microsoft’s own research found that estimate low. It says the region needs 305,000 new units to meet the demand.

There is broad consensus among elected officials and housing experts that the region needs housing affordable to a huge range of income levels, from the very lowest-income individuals trying to exit homelessness to middle-income people unable to afford housing near their jobs. Microsoft is focusing its efforts primarily on the latter category, which includes people such as teachers, nurses and police officers.

“In some ways, ironically, there’s been less focus on middle-income housing [in the region] than on low-income housing,” Smith said. “Many of the people who play vital roles in our communities can no longer afford to live in them.”

Microsoft began working on their housing plan last summer in the wake of Seattle’s failed effort to impose a tax on big businesses to pay for housing and homelessness services. The company partnered with Zillow, national affordable housing nonprofit Enterprise Community Partners and Boston Consulting Group to analyze regional housing data and look at best-practice solutions from around the country.

Many details are still to be determined about Microsoft’s new fund.

The $225 million in loans for middle-income housing will go toward construction of housing for families earning $62,000 to $124,000 per year, which is about 60 to 120 percent of current area median income for families of four.

Enterprise Community Partners Senior Program Manager James Madden explained that in Washington there are very few options for subsidizing “workforce” housing for people earning more than 80 percent of area median income and that the high cost of land and construction make it difficult to build new, unsubsidized housing that people in that income bracket can afford to rent or buy. If market-rate developers can get financing for projects at significantly lower interest rates than private investors or banks would offer, as Microsoft is proposing, they can afford to offer significantly lower rents than they otherwise could.

The $250 million in market-rate loans will go toward low-income housing for people earning 60 percent of area median income, currently about $49,000 for a two-person household. Smith said the company plans to reinvest the repaid loans and profits from interest into more affordable housing funding in the future.

Microsoft is also pushing for policy changes at the state and local level that mirror many of the requests housing and homeless advocates want to see. They include doubling the state Housing Trust Fund to $200 million, reforming the state condo liability law, offering surplus public land at low or no cost to affordable housing developers, allowing for denser development near transit, streamlining permit processes and more. Mayors from Auburn, Bellevue, Federal Way, Issaquah, Kent, Kirkland, Redmond, Renton and Sammamish signed a letter, acquired by The Seattle Times, committing to the local pieces of the broad policy package.

King County Councilmember Claudia Balducci, co-chair of the Regional Affordable Housing Task Force, said: “I think it is really clear that [Microsoft’s plan] is an ‘and’ not a ‘rather than.’ It’s all additive. It’s by no means end of the story. We still need to focus on very, very low income residents and people exiting homelessness. … Local electeds are keenly aware that this does a part. But we need a whole lot more. I hope it’ll be a catalyst to allow for more market housing and publicly subsidized housing as well.”

Microsoft’s Smith said the main marker of success for their initiative will, of course, be the construction of new housing. But another “leading indicator” will be whether other companies follow their lead.

“We’re not standing up for a moment and saying every other company should feel some new obligation to match our donation,” he said. “But if any company wants to, we would be thrilled. We all have a part to play.”