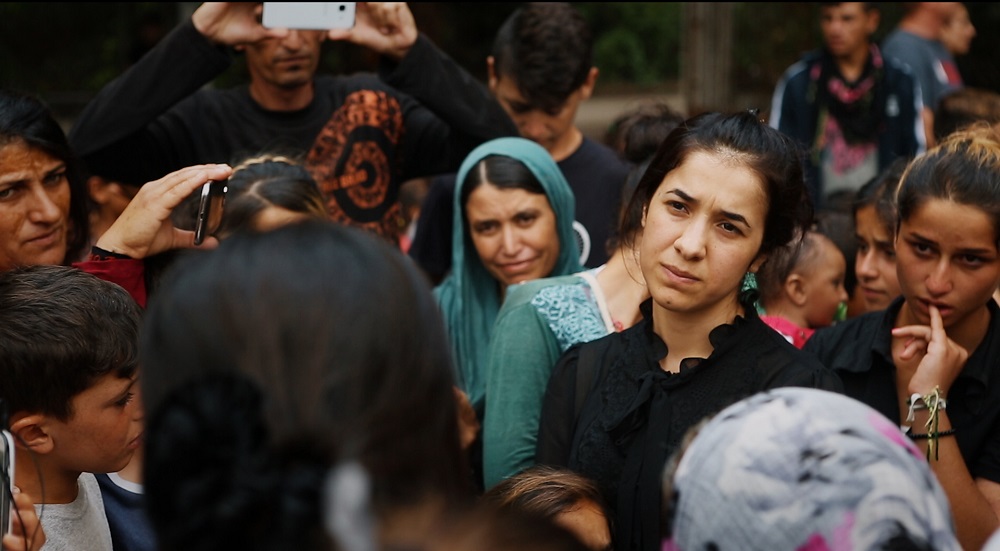 In a still from the documentary ‘On Her Shoulders,’ Yazidi genocide survivor Nadia Murad visits a refugee camp in Greece. (Image courtesy of Northwest Film Forum)

With the release of their debut EP “Last Call” earlier this year, blues-rock quartet Bearaxe joined Seattle’s au courant class of fierce-woman-fronted rock bands. Lead singer Shaina Shepherd’s towering vocals are embellished by scorching lead guitar and a hard-charging rhythm section. Also on the bill is Afrocop, a remarkably confident trio that plays lustrous psychedelic jazz that would work equally well in concert-hall recitals or blacklight-lit vape sessions. Finally, High Pulp is a young, raucous and ambitious 10-piece instrumental funk unit. Like Bearaxe, it broke out big this year by winning audiences one high-energy live show at a time. –J.Z.

This moving documentary by Alexandria Bombach tells two stories. One is about Nadia Murad, the Iraqi woman who survived the Yazidi genocide in 2014 only to be kept as a sex slave by ISIS. After her escape, she landed in a refugee camp in Germany and later became a U.N. goodwill ambassador, speaking around the world about human trafficking. This year, she earned a Nobel Peace Prize for her work raising awareness about human rights violations. The other story — the one that takes this doc from traditional portrait to something well beyond — is about the toll sudden political fame takes on Murad, who went from enslaved young woman to Amal Clooney’s highly publicized client in just a couple years. The pressure for her to be “the spokeswoman” for her community, and to condense her harrowing story down to a sound bite perfectly honed for media consumption, is palpable and wrenching. –B.D.

Among the torrent of hip-hop talent bursting out of Chicago, Mick Jenkins is something like the city’s conscience, an experimentalist and craftsman with a powerful drive toward self-interrogation. The 27-year-old MC released his second album, Pieces of a Man, just last month; its title and introspective tone are a nod to iconic iconoclast Gil Scott-Heron. But Jenkins is no classicist — as he addresses contemporary topics like sexual consent, religious skepticism and poverty, he partners with forward-thinking producers like Montreal-based wunderkind Kaytranada, Detroit veteran Black Milk and prog-jazz quartet Badbadnotgood. His live band often includes a drummer, guitarist/backing vocalist and laptop producer, setting the stage for a night as musical as it is intellectual. –J.Z.

David Shields: Nobody Hates Trump More Than Trump: An Intervention

Critics have called it “a compelling book offering something to offend nearly anyone” (Kirkus), “recklessly and unpredictably full of insight” (Buffalo Review), and “a sobering, nuanced, and … brutally funny psychological investigation into why Trump resonates with all, even the people who hate him” (The Rumpus). Who better than University of Washington professor, prolific author and notorious contrarian David Shields to delve into the motivations of President Trump in a way that confounds and delights citizens of all stripes? “I’m determined to figure out what Donald Trump’s original wound is,” Shields says in his prologue. The result is part pop-psychological profile, part cultural criticism, part compilation of Trump quotes and, overall, a page turner. Hear what else his investigation turned up when he reads at Elliott Bay Books. –B.D.

Straight-up one of the most lovable bands in Seattle, All Star Opera embarks on its second-annual “World Tour” of the city, stopping at five different venues in five different neighborhoods over five successive nights. As if the band’s melodic, soul-drenched live hip-hop music and clever, high-concept music videos aren’t endearing enough (they are), the sextet will donate their earnings from this nano-tour to Mary’s Place and No Child Sleeps Outside while holding a clothing drive at each venue. Plus, every show features handpicked openers representing some of the strongest talent in the city, including Sendai Era, MistaDC, Cuff Lynx, Kung Foo Grip, Tres Leches and more. –J.Z.

There’s something a little dangerous vibrating in the work of Seattle visual artist Laura Castellanos. Lines and patterns repeated to the point of double vision, electric color against black backgrounds, cartoony faces that might just be hypnotizing you the longer you look. She brings all her mysterious “brujita” powers to play in her newest show, Bodega (Love Materials), which takes viewers down her own memory lane and into a shop her Cuban grandparents owned in the 1960s. With paintings, hand puppets, voodoolike dolls and other art objects, she has transformed the gallery into something that resembles a combination art shop and paint-splashed, interactive studio — a showcase of the many ways she channels her startling vision. –B.D. 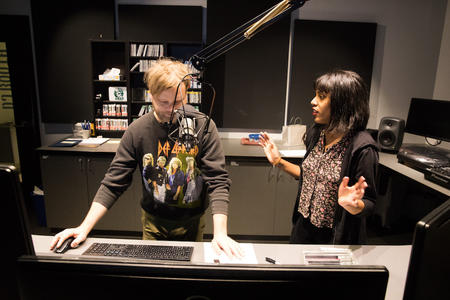