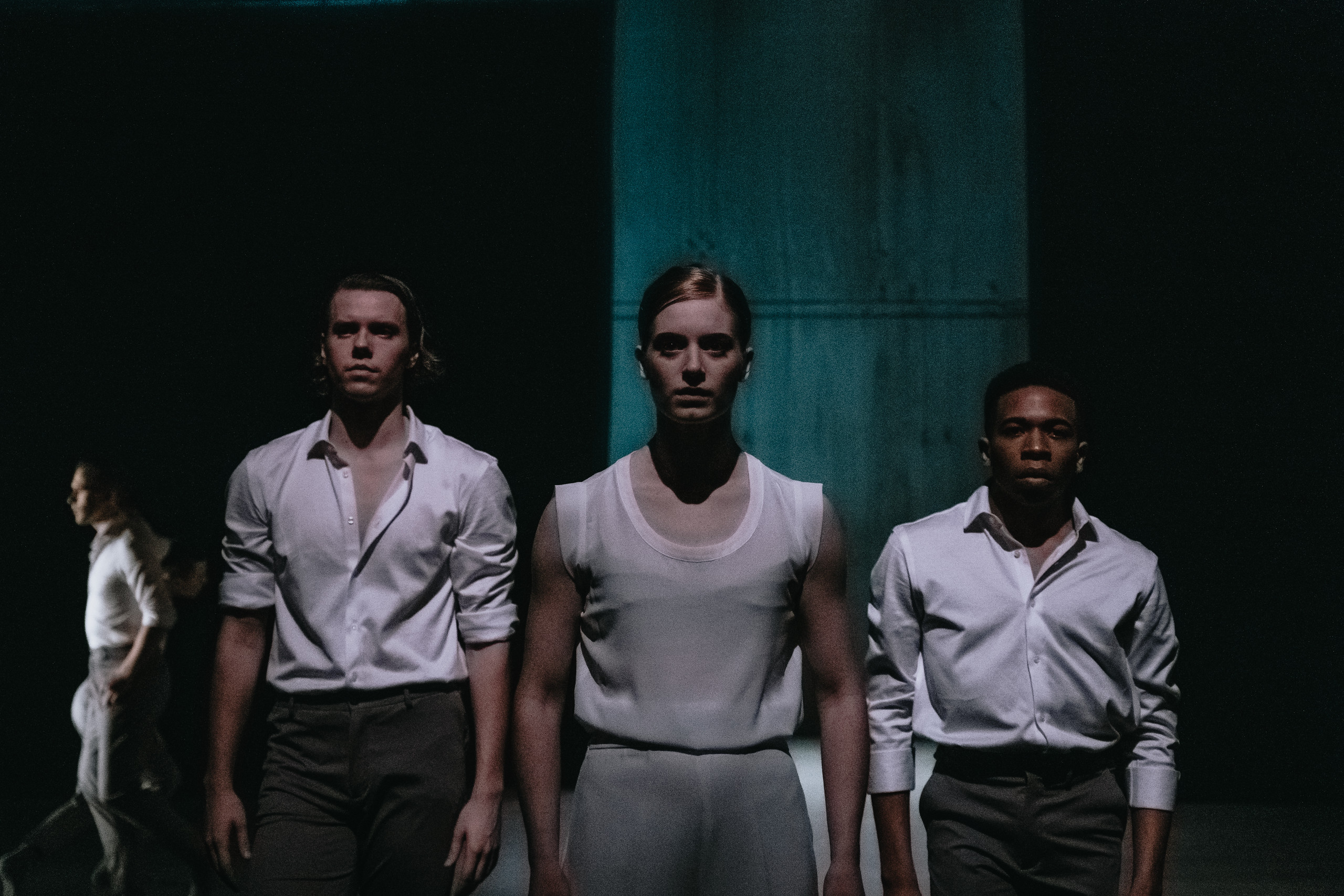 Now entering its 10th year as a contemporary dance nonprofit, Seattle’s Whim W’him kicks off 2019 with three works by three esteemed choreographers. Shanghai-born-and-raised Yin Yue shares her take on human isolation and connection in The Most Elusive Hold. In this lovely, fluid piece, dancers gain intensity when grasping each other, only to return to solo states of contemplation. Whim W’him founder and former Pacific Northwest Ballet dancer Olivier Wevers contributes a timely piece that brings the global refugee crisis to the fore. In Trail of Soles, his dancers embody people waiting at borders, pressing against fences and cowering under silver blankets — supposed protective gear that offers less solace than small, tactile moments of human kindness. And Seattle’s own Zoe Scofield presents This Mountain, a striking, moonlight-lit piece that radiates softness as it seeks to express beauty in the mundane. Dressed in loose white and light gray street clothes, the dancers move through what might be life, striving to make forward progress, sometimes gently stepping in for each other, or nudging each other back, sometimes soaring above a rectangle of light. Muffled foot thumps act like a heartbeat connecting the group, whose movement is a subtle blend of folk dancing, ballet and even a hint of flamenco, sock-footed and heavenly. –B.D.

Part of a larger festival of new work generated by Intiman Theater’s emerging artist program, this double-bill features two solo performances about identity and Asian American culture. In The Sonata Years, Steven Tran confronts the stereotype of the Asian classical musician and the challenge to become truly authentic. It’s part monologue, part piano recital, part flight of fancy (with appearances by Liszt and Rachmaninov). In True Love, but Gay, Aaron Jin tells his own personal story, about a young man trying to find love through many first dates — with the complicating layers of being Asian and gay. –S.H.

The best way to appreciate winter in Seattle is to get out of Seattle. Only 100 miles east, the Cascades offer a true winter wonderland, where the snowy, scenic town of Leavenworth serves as both goofy Bavarian facsimile and true-blue German-style beervana. That combo only gets better with the sixth-annual Timbrrr! Winter Music Festival, which brings two days and nights of kickass live music to various venues around town. Stomp your snow boots to garage rock from headliners Shannon & the Clams and Kyle Craft plus a tribute to Aretha Franklin by the Seattle-based True Loves, fronted by powerhouse vocalist Tiffany Wilson, the feel-good indie-electro of Jenn Champion, Portland soul-punk supergroup Slang, cosmic country from Hyways and a lot more. –J.Z.

His real name is pronounced “K-Von,” and based on his handsome-guy-next-door persona one can assume that Kevan Moezzi adopted the hip-hop-ish mononym mainly to be helpful. A prolific standup comic, author and filmmaker, K-Von pulls from his personal history as a regular ‘90s kid born to an Iranian father and American mother in Reno, Nevada, and all the awkwardness it entailed. On stage he’s more storyteller than one-liner-dropper, often taking on his father’s Persian accent and always painting his family — and Middle Eastern folks in general — in a heartfelt and humanizing light. Tonight he riffs on bits from his new book, Once You Go Persian. This is comedy as humanitarian tonic, and it goes down real easy. –J.Z.

When President Obama picks your first book as one of his 10 must-reads for “future world leaders,” you’d think you could rest on your laurels. But after this achievement (for Behind the Beautiful Forevers: Life, Death and Hope in a Mumbai Undercity), along with a Pulitzer Prize and a MacArthur genius grant, Boo is now at work on another journalistic exploration of social conditions — this time in Washington D.C. Her focus is social mobility (or lack thereof) in the city’s poorest neighborhoods, which she’ll reveal in her next book, no doubt using the same captivating storytelling skills that bring raw humanity to the catch-all label of “underprivileged.” –B.D.

Here’s your chance to check out two of the city’s buzziest pop artists in Seattle’s newest concert venue — for free! Chong the Nomad (aka Alda Agustiano) is a ukulele-strumming, harmonica-blowing, singing/rapping superstar in the making. As heard on her 2018 debut Love Memo, Agustiano’s electro-pop compositions are as intimate as they are unconventional, a gently weird kind of inner-monologue soul set to squishy, splashy beats. Spirit Award’s space-rock excursions are surprisingly anthemic, like a low-orbit satellite leaving a trail of light to follow into the darkness. Both shows happen at Belltown Yacht Club, the recently opened music space in the back of Screwdriver, which is arguably the coolest modern dive bar in Seattle. –J.Z.

In Tandem: Works by Fay Jones and Robert C. Jones

Seattle’s visual-art world lost a giant in late December, when noted Northwest painter Robert C. Jones passed away at age 88. Now, two longtime local galleries are paying homage with joint shows of work by Jones and his equally heralded wife, the painter Fay Jones. Both received countless honors and grants through their 50-year careers; both are known for their playful approach to color. But while Fay is recognized for her dreamlike, rounded figures, Robert is known for his heavy-lined abstractions. Compare and contrast the couple’s work over their many years together and imagine a household built of hue and composition. –B.D.