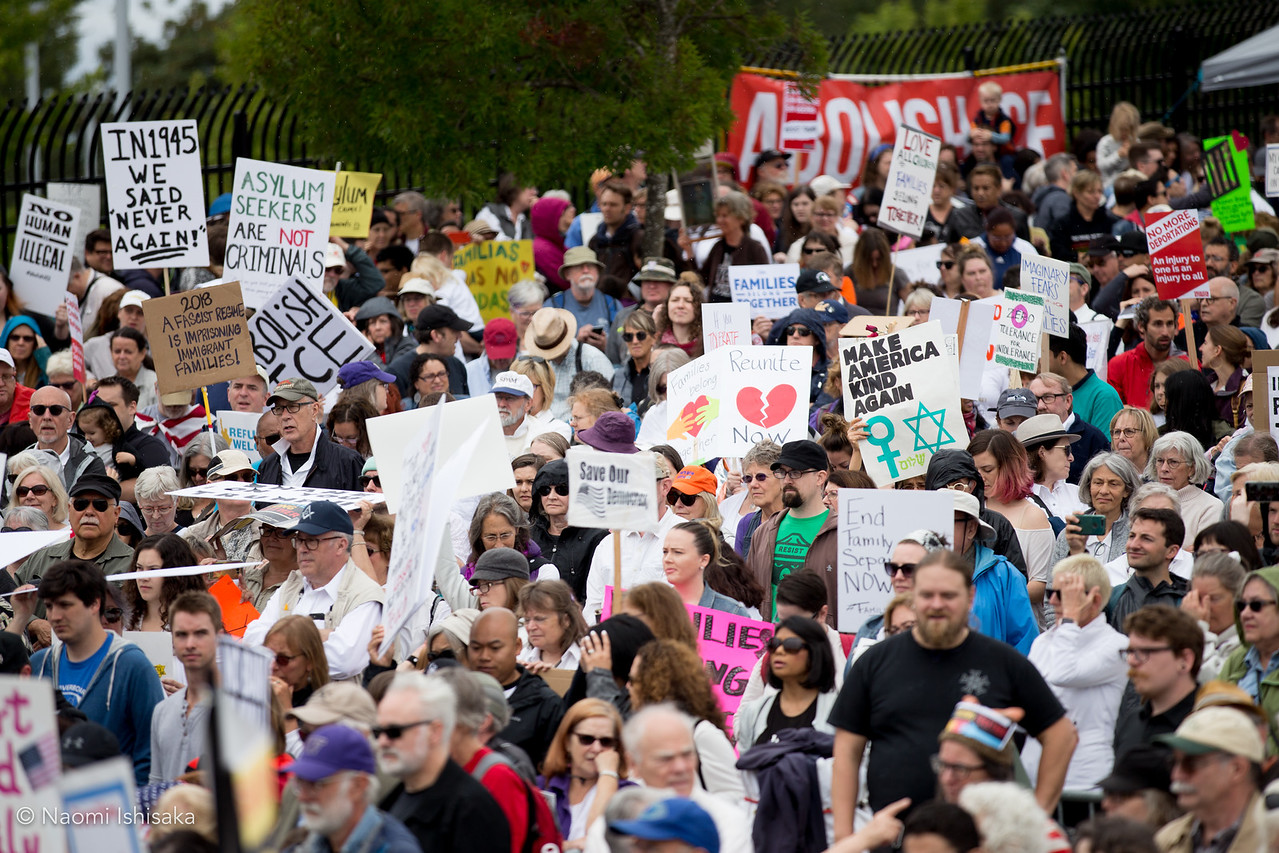 Thousands of protesters gathered at the SeaTac Federal Detention Center on June 30, 2018, to protest the the Trump administration’s immigration policies. (Photo by Naomi Ishisaka)

Organizers of a large summer rally protesting the Trump administration’s separation of families at the border are suing the City of SeaTac after the city sent the immigrant-rights group a hefty $37,000 bill for “crowd control.”

The lawsuit, filed Dec. 21 in U.S. District Court for the Western District of Washington at Seattle, argues that the $37,000 fee for the June 30 demonstration, which attracted approximately 10,000 people, is prohibitive and impermissibly chills “constitutionally protected free speech and assembly rights,” violating the First Amendment.

“I suspect that because I myself am an immigrant that they thought I would be easy pickings,” said 35-year-old Mohammed Kilani, one of the organizers of the rally who paid about $400 for a permit for the event and later received a bill for $37,075.61. “I just got blindsided by this bill for $40,000 for public safety. There was never even a hint that it could be so high.

“Your average American doesn’t have $40,000 for public safety. That’s a Mercedes,” Kilani added. “If this becomes a precedent, we’re just going to be able to silence people for public expression.”

Kilani said he’s been an organizer for approximately two years and has never been hit with such a large fee — not when protesting the Trump administration’s travel ban, for example, or when helping organize the Women’s March.

In response to requests for comment, Kyle Moore, government relations and communication manager for the City of SeaTac, said: "Due to pending litigation the City is not able to comment on this matter."

A coalition made up of over 30 groups dubbed “Families Belong Together — Washington” organized the summer rally. They included Casa Latina and the Washington Immigrant Solidarity Network. The rally was part of a national day of action by the same name.

The event was held outside the Federal Detention Center in SeaTac, where immigrant parents were detained after being separated from their children at the border. It featured speakers such as Washington state Sen. Rebecca Saldana, as well as immigrants and refugees who shared their stories of coming to the United States.

Two days after the rally, Kilani received the invoice for $37,075.61. According to the lawsuit, “of  the invoiced costs, ‘crowd control — police services’ comprise $30,847.49 and ‘crowd control — public works’ another $5,810.20, with the remainder being several hundred dollars of permit and technology fees.” In September, Kilani received a second notice from the city stating that his bill was past due.

The organizers' eight-page complaint explains that the City of SeaTac has “a vague municipal code provision,” which authorizes charging “event organizers attempting to exercise their constitutionally protected rights to free speech and public assembly.

“The amount of the costs assessed, however, is determined by the city administration based on the city’s own assessment of how the public will respond to the event,” reads the lawsuit. “In addition, organizers of events are not provided any cost estimate” and “can only guess whether they can afford to exercise their constitutionally protected speech and assembly rights.”

Lisa Daugaard, director of the Public Defender Association, said in an email: “This case is a good demonstration of how arbitrary determinations of the need for public safety services can be. This event was completely peaceful, and completely safe. No policing was required.”

“SeaTac chose, for their own reasons, to play it safe and deploy many officers, but this was based on their own assessment of potential risk, which proved completely erroneous and can be based on bias, animosity toward the politics of the speakers, or stereotype,” Daugaard said.

“Requiring demonstration organizers to pay for policing for their particular event shuts down public assembly for all but the wealthy,” Daugaard argued. “Additionally, it creates a ‘heckler's veto,’ where unruly counterdemonstrators drive up the cost of the event they are protesting, effectively shutting down speech they don't like because of the prohibitive cost of policing the counterprotestors.”

Daugaard concluded: “It's the responsibility of our whole community to ensure that people can peaceably assemble about important topics and not suffer violent attack.”

This isn’t the first lawsuit filed in Washington over large demonstration fees. In February, Republican students at the University of Washington sued the school after the UW imposed a $17,000 security fee for a rally welcoming the controversial, Washington-based activist Joey Gibson. The two sides eventually settled, and the UW agreed to modify its policy on sticking student groups with security fees.

With regard to the June 30 rally, another organizer, Palmira Figueroa, added: “We left the place completely clean. I was the last person to leave, and it was absolutely spotless.”

“It just doesn’t make any sense,” she said.

Figueroa also argued the fee for the SeaTac rally is part of a recent pattern in the city where people of color are discriminated against. Figueroa pointed to the possible displacement of immigrant-owned businesses in the area as another example of the city’s animus toward the immigrant community.

“I feel there’s a pattern where there’s no respect,” Figueroa said.