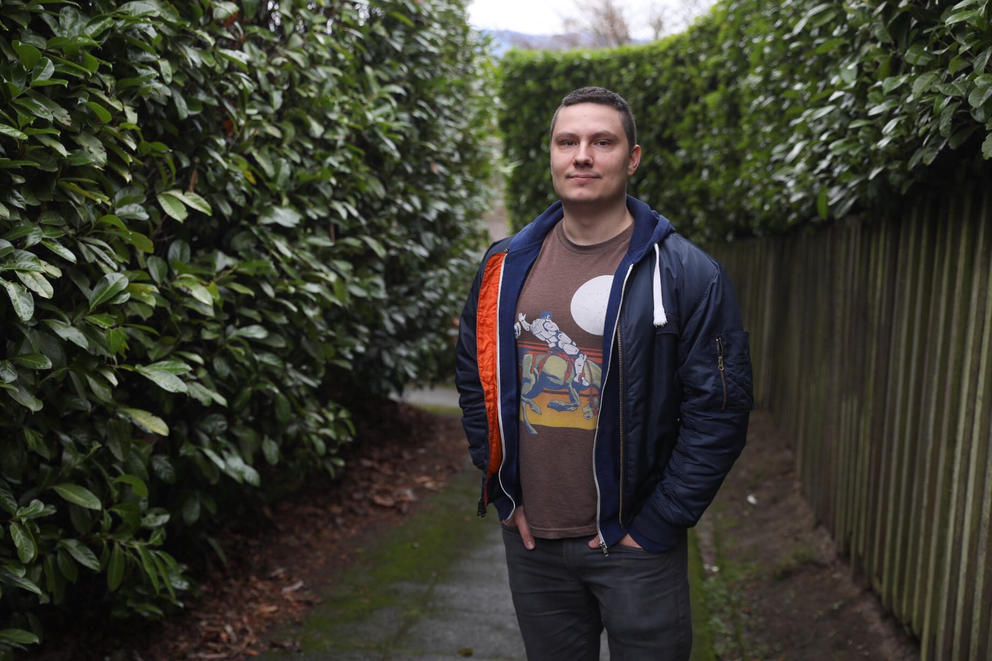 Filmmaker Wes Hurley photographed in Seattle, Jan. 17, 2019. Hurley was recently awarded a Creative Capital grant to turn his award-winning short film, Little Potato, into a feature-length film. The story is a personal narrative about growing up gay in Russia and fleeing the country for the U.S. (Photo by Matt M. McKnight/Crosscut)

Wes Hurley was having a very bad day. It was during the recent holiday crush when the Seattle filmmaker had been asked on short notice to make a video for a Christmas-themed drag show (To Jesus, Thanks for Everything). Adding to the stress of the deadline, he thought he was going to need surgery for a kidney stone — a physical discomfort exacerbated by the fact that he didn’t have health insurance. Working at a frenzied pace and in pain, Hurley received a phone call. It was Creative Capital, the national arts organization, informing him he’d been awarded one of its coveted $100,000 grants.

“It was really amazing news,” he recalls, “but at that moment I was so disoriented.” He asked if he could call them back later.

When they finally reconnected, Creative Capital asked him to keep the news under his hat until the official notice went out. “Which was no problem,” Hurley says, “because I wasn’t going to believe it until I saw the press release anyway.”

The announcement landed this week, and Hurley is just starting to believe it. On Facebook, he posted, “No words for how happy I am to receive this life-changing award from Creative Capital!!!”

Sitting in a Madrona coffee shop with a cup of tea and a Danish pastry, he now laughs remembering the hectic day he got the news with a possible $20,000 surgery looming. “I was literally like, can I spend the grant on the surgery?” (He can’t. And he ended up not needing the surgery after all.)

Hurley, 37, is easygoing and funny, his Russian accent noticeable but not thick. He remembers early in his career thinking “someday” he’d apply for Creative Capital, “but it seemed like you had to be at a certain level.” The grant is regarded as one of the most prestigious available for individual artists. Past Seattle recipients include Ahamefule J. Oluo, Deborah Lawrence, Lead Pencil Studio, Paul Rucker, Susan Robb and Sutton Beres Culler.

About a year ago, his friends convinced him it was time. He’d had notable success with Little Potato (2017), his 13-minute autobiographical film about growing up gay in Russia and escaping to the U.S. as a teenager, thanks to his mother’s decision become a “mail-order bride.” The film (co-directed by Hurley and Nathan Miller) won a South by Southwest Jury Award, the Outfest Audience Award and was selected for The Atlantic magazine’s online showcase of short docs (where you can watch it in its entirety). His mother Elena, who tells her side of the story in the film, is particularly endearing. “People are really inspired by her,” Hurley says. The two currently share an apartment in Central District.

He had also gained acclaim for his web series Capitol Hill, a campy soap opera spoof starring Seattle drag and boylesque personalities Waxie Moon, BenDeLaCreme and Jinkx Monsoon. The show recently received funding for a third season and will make the leap from web series to television streaming series (the network remains under wraps).

Along with his filmmaking cred, Hurley suspects his distinct background probably helped him win the grant. “My perspective as a Russian, gay immigrant is pretty unique — and it gives me a certain sensibility and style.”

Hurley and his mother landed in Seattle in the late 1990s. “Coming from Russia, we would’ve been happy to live anywhere in America,” he says. “But to come from Vladivostok, one of the worst cities in Russia, and land in one of the most progressive cities in the U.S.…” They arrived in the summer when the weather was perfect. “There was a huge parade in my neighborhood!” he recalls. (They lived in Fremont, and were wowed by the Solstice Parade.) His American dream was coming true.

In Little Potato, Hurley talks about the dubbed American movies he and his mother used to watch in Russia on a renegade TV channel. Ghost, Labyrinth, Robocop — all served as a respite from their cramped, dismal life and inspiration for Hurley’s career.

He made the short on an extremely low budget: $2,000, plus $2,500 for a version augmented with virtual reality, both funded by a 4Culture grant. The Creative Capital money will help Hurley turn the short into a full-length movie. He wants to expand the sections about his mother’s job in a Russian prison and his volatile American stepfather, and add some moments of magical realism. (“I’d like to have some portraits of Lenin that interact with people,” he says.) His total fundraising goal is $500,000 — a bargain-basement budget by Hollywood standards, but still a long way to go.

Creative Capital awardees receive $50,000 of the grant in direct project funding; the rest comes in the form of career development resources, networking opportunities and advisory services. It’s the latter that often proves the most valuable in the long term.

“It’s a huge boost in terms of not just cash, but the promise to mentor you and help you bring in more money,” says Hurley, noting that the award is a stamp of approval for potential investors. “It’s definitely the biggest thing that’s happened to the project.”

Joshua Kohl, of Seattle performance art group Degenerate Art Ensemble (a prior recipient of the grant) served as Hurley’s mentor during the application process. “He tells me it’s a lifelong relationship [with Creative Capital],” Hurley says. “After getting the award you can always go to them for support. That’s life-changing.”

But this newfound affirmation hasn’t caused Hurley to set his filmmaking sights on Los Angeles or New York City. “Film is so often filtered through an LA or New York lens. We love those stories, but it’s a narrow lens,” he says. “I'm really committed to making work in Seattle — the landscape here is so different and striking, it affects people and how we operate.”

For now, he needs to plan a celebration. He doesn’t drink, but says he wants to commemorate the achievement somehow. “Maybe I’ll go to Cafe Flora with my mom,” he considers, warming to the idea. “It’s one of our traditions,” he says. “It's such a Seattle place.”