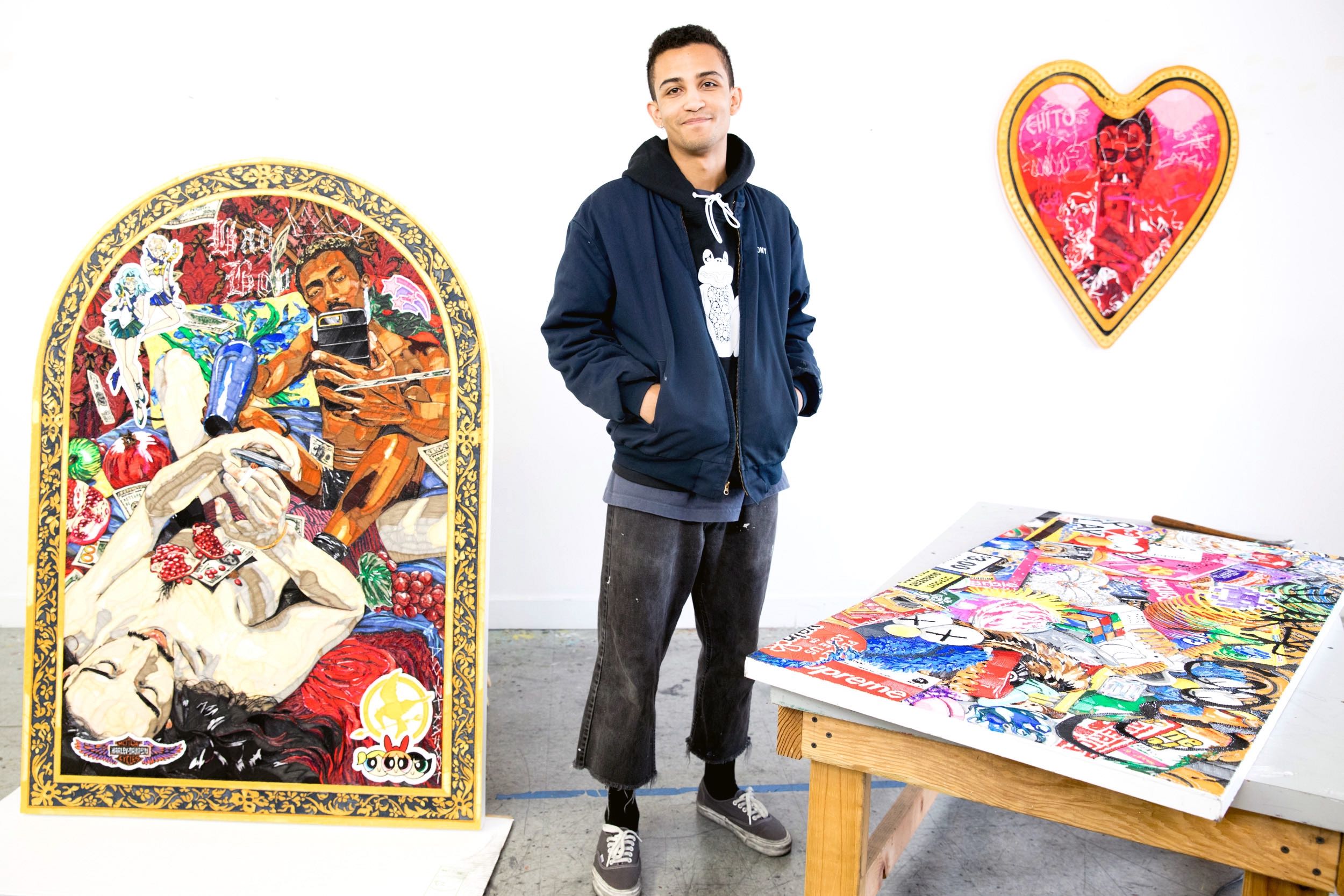 Anthony White with some of his artwork at his studio east of Seattle's Chinatown-International District, photographed on Dec. 19, 2018. (Photo by Matt M. McKnight/Crosscut)

Anthony White, the boy wonder of Seattle's visual art scene, is wading in silence. Strewn around him in his studio on Jackson Street, just east of Seattle’s Chinatown-International District, are paintings both finished and not: portraits of friends taking selfies, still lifes pulsing with cultural iconography, consumerist excess and the occasional nod to death. The artwork is both dizzying and mesmerizing, intensely modern and technically brilliant.

White, who is preparing for his upcoming Greg Kucera Gallery show, is pondering a quote by the German filmmaker and artist Hito Steyerl. Poor images, the quote reads, express all the contradictions of the contemporary crowd: its opportunism, narcissism, desire for autonomy and creation, its inability to focus or make up its mind, its constant readiness for transgression and simultaneous submission.

Hefty, sure, but it also calls to mind the selfie, arguably the most popular form of self-portraiture in the world — and one for which White has cultivated a special fascination. “The selfie can have a million [interpretations],” he says.

The 24-year-old White is short-statured with kind eyes and a cool style. His work is capturing intrigue from across the generational spectrum. When ’90s-era kids encounter White’s paintings, they are confronted with instantly resonant cultural references, prompting a flood of nostalgia. Others, particularly those concerned with the sweep of art history and its modern manifestations, are impressed with the young artist’s aesthetic confidence and technical skill.

And the art-buying public is evidently intrigued, too. At his first solo show at Cornish College of the Arts last May, White sold all of his paintings. During his second, at The Factory on Capitol Hill, he sold all but one.

White graduated from Cornish last summer and immediately caught the eye of longtime local gallerist Kucera, who soon asked him to join his ranks. When White debuted with the gallery at the Seattle Art Fair in August, Kucera showed four of his pieces. All of them sold. White is among the youngest to ever be represented by the gallery.

A prolific Instagram user and curator of his online persona, White shrugs off the association between selfies and narcissism. In his work, White is exploring what the selfie says about exercising autonomy and the ability, in today’s digital era, to carefully define and disseminate one’s own narrative.

“Being able to display yourself for the whole world to see is a powerful thing, I think,” he says.

On the surface, the selfie may indicate nothing more than a shallow act of self-exhibitionism. But White's interest in the form goes beyond the simple story. When he studies a selfie, he understands "there's something specific [the subject] wants me to recognize here."

“Humans are so complex in the way we choose to present ourselves,” he says.

Are we our selfie? Are we as people see us online? The questions linger in White’s work. “There’s truth” to the selfie, he says. “I don’t think people like to accept that.”

Kucera agrees: “I think he’s very cleverly tapped into this phenomenon of the self and the selfie.”

A student of contemporary opulence, White didn’t come from a glamorous background. He spent his middle and high school years in Prescott, Arizona, a small city north of Phoenix lush with ponderosa pines and golf courses. “No diversity, no culture really, a very sparse landscape” is how he describes it. In the space between White’s efforts to fit in — a task complicated by his then-suppressed sexuality and the fact that he was one of a “handful of Black students” at his high school — he discovered, in drawing and tattooing, the early rumblings of an artistic voice.

What he lacked in inspiration from his surroundings, White gained in support from his parents. At 15, they gifted him a tattoo gun. His dad, a lowrider mechanic, was an enthusiastic blank canvas, and White learned quickly how to draw clean lines on stubborn skin, ideal training for the tool and material that now define his work.

White paints on panels with fine strands of melted plastic, a material he only recently has begun to master. He uses a small handheld object, similar to a thick pen, which heats and melts coils of a material used in 3D printing called polylactic acid (PLA).

“It’s nuts,” says Casey Curran, a friend and mentor from Cornish. “He literally picked up that pen six months before his [undergraduate solo] show.”

White sets his subjects — mostly young men from lower-middle-class backgrounds — against Renaissance-era wallpapers and meticulously wrought gold frames, also made of PLA. This elevates his subjects, giving them a vaguely transcendent quality.

As for White’s still lifes: at first glance, they are visual riots of worthless crap, the byproducts of capitalist overabundance. In a horizontal painting entitled KULTURED, the viewer is bombarded by a Starbucks Unicorn Frappuccino, a Slinky, an El Monterey frozen burrito, a Barbie and neon orange curly-tie shoelaces. It’s the stuff we fleetingly desired, paid too much for, then left to rot in our stomachs, in old toy boxes, in the black hole of a bedroom closet.

“It’s kind of like this American dream,” says White about the consumerist themes in his paintings. “You can insert some money and hope for the best but you might get this really shitty ball that’s going to pop the second you toss it around.” Or maybe you’ll score something cooler, like a limited-edition Louis Vuitton Razr cellphone. But, adds White, “it’s still going to disappoint you.”

Many of the objects in White’s paintings shared the same fate: obsolescence. For White, this echoes the transience of life. “I’m trying to use devices as symbols for death,” he says. “The Razr phone was super important and [now] that doesn’t exist.”

In other paintings, there are more allusions to death and the afterlife: Dante’s The Divine Comedy, a bag of skulls, a statue of Jesus, an angel. Dan Webb, White’s former professor and now colleague, says these aesthetic choices find resonance in art history, stretching back to the vanitas painters of the early 17th century. In those works, says Webb, “there’s always an element of death — food and plenty and riches and always rotten fruit and a fly.”

“[White] is really cognizant of an art historical conversation, but I think he’s putting it through pop art and Instagram — an internet lens,” says Webb. “There’s this feeling of this crazy party filled with useless excess, but also this pathos, this really understandable desire to have something meaningful and great in your life.”

Anthony White's Smoke and Mirrors show is at the Greg Kucera Gallery Jan. 3-Feb. 16. He will deliver an artist talk at noon on Jan. 5.

Several months ago, White began a painting of two friends, a massive circular piece stretching 8 feet in diameter. The outline was sketched onto two semicircles, but it was “hard to make out what the figures were doing,” says Kucera, who’d brought some potential clients to White’s studio to meet him. White had painted in only a small portion of the panel, but Kucera says the clients were so impressed by it and by the young artist that they decided to buy the painting, unfinished, on the spot. It sold for $14,000.

White’s friends and mentors describe him in the superlative — “charming,” “goofy,” “caring.” But their overwhelming impression is one of a furiously hard-working artist teeming with energy and striving for greatness. Asked over text whether he treated himself to something nice after the $14,000 sale, he replies: “If only I could buy time. ... I have a lot on the list and even at my age now, I have missed life goals and deadlines and others are coming up real quick. ...”