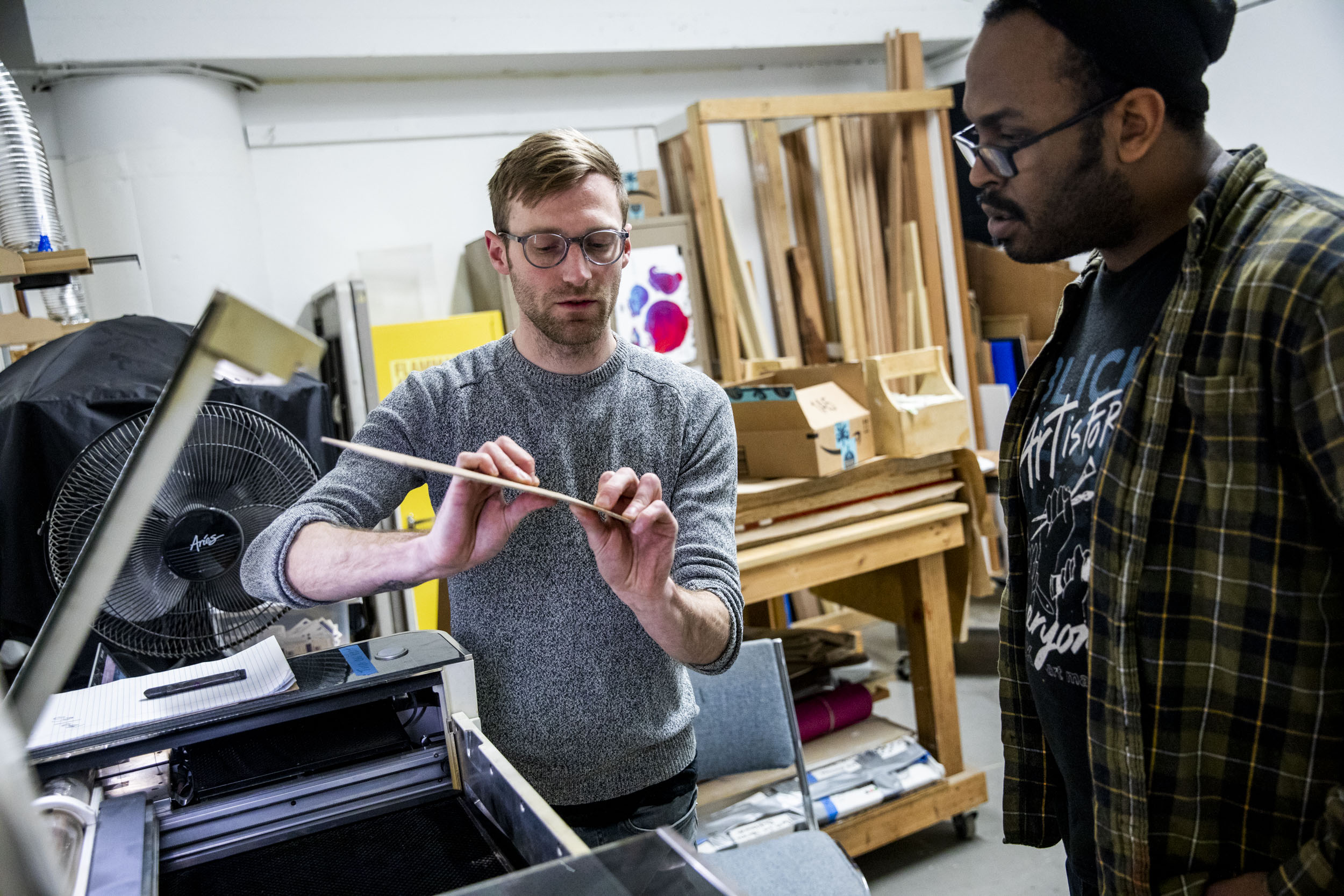 Studio tech Casey Curran of Maple Valley, left, and junior Nathan Haskins of Tacoma work at the laser cutter machine at Cornish College of the Arts in Seattle on Jan. 30, 2019. Cornish will be reducing tuition by about 20 percent starting in the 2019-2020 school year. It is believed to be the first art school in the country to reset its tuition. "Thank god this is happening," Curran says. (Photo by Dorothy Edwards/Crosscut)

Corinne Wheeler was on the bus commuting to the Cornish College of Arts when she opened her email and got the news: her tuition would be 20 percent cheaper next year.

“I was like, oh my god,” she said. “I was in shock. I sent a screenshot to my parents ... and they were freaking out about it.”

Cornish is now among an increasing number of private colleges and liberal arts schools that aren’t just freezing their tuition rates, but reducing them all together.

In an effort to make arts education more accessible, Cornish announced Tuesday that it would be “resetting” its tuition rates by 20 percent less for all new and returning students in the 2019-2020 school year. The sticker price would drop from $40,442 to $32,160, not including room and board.

The tuition adjustment arrives after a steadily declining enrollment rate since the Great Recession, according to Ryan O’Mealey, Cornish vice president of enrollment. Currently, the school hovers at about 620 students.

The tuition reset will reduce costs for about half of the students returning next year.

“This is the first step in a comprehensive approach to address [declining enrollments]. All arts colleges across the nation are experiencing this problem,” O’Mealey said.

Cornish President Raymond Tymas-Jones said it wasn’t long after he took the post last July when he started talking with the school's board of trustees about tuition rates. Shortly after, the school hired a research firm to conduct a national tuition sensitivity survey.

“It’s coming out of our desire to make the education experience more affordable and a greater sense of access,” he said.

The survey was sent to 400 people across the country “to try to ascertain and to learn from prospective students how does Cornish measure in reference to some of our top competitors across the country,” he said.

The survey found that students were less likely to consider attending Cornish when its tuition was similar to those of competing art schools. But the rate at which students would consider Cornish went “exponentially up” when tuition rates were lower. Cornish officials declined to publicly share a copy of the survey's results.

Cornish officials believe theirs is the first arts school to reset its tuition rates alongside a growing list of small, private, liberal arts schools like the Cleveland Institute of Music, Mills College in California and Avila University in Missouri.

Cornish awards nearly $6 million total in merit scholarships a year to 95 percent of its student body, and the reset will not affect students receiving financial aid, whose aid would be readjusted under the new tuition structure, particularly those who are lower income, O’Mealey said.

Instead, the new tuition price will help students whose family income level makes them ineligible for financial aid — but who can’t afford to pay for college outright.

Wheeler, a freshman, is one of those students. She is the oldest of five kids. And while her mother is a lawyer, the reality is she would have to take out loans to continue paying for her college education.

“I mean the fact that I knew my family wasn't going to be able to pay for it and that I’d have to take out loans almost made it so i didn't really want to come to school,” she said. “There was a lot of fear going into it and there are still moments where I'm like, God, is this really the right decision or really the right path?”

At 19, Wheeler has already taken out $14,000 in private loans and $9,000 in subsidized and unsubsidized federal loans.

Wheeler said the lower tuition price shows Cornish’s commitment to its students. She plans to apply for more merit scholarships next year and will put any extra cash she gets into savings.

“The thing about going to a liberal arts school and getting a degree in the arts is it’s not like I’m going to school to be a doctor or a lawyer.. with a guarantee of a higher salary,” she said. “I think it’s just a lot of having to have faith in yourself that you will be successful and be able to pull it off when the time comes.”