Downtown driving tax could fix traffic without pricing out the poor

Mayor Durkan wants to toll drivers to lower emissions and break Seattle's gridlock, and new research shows it could benefit low-income communities, too. 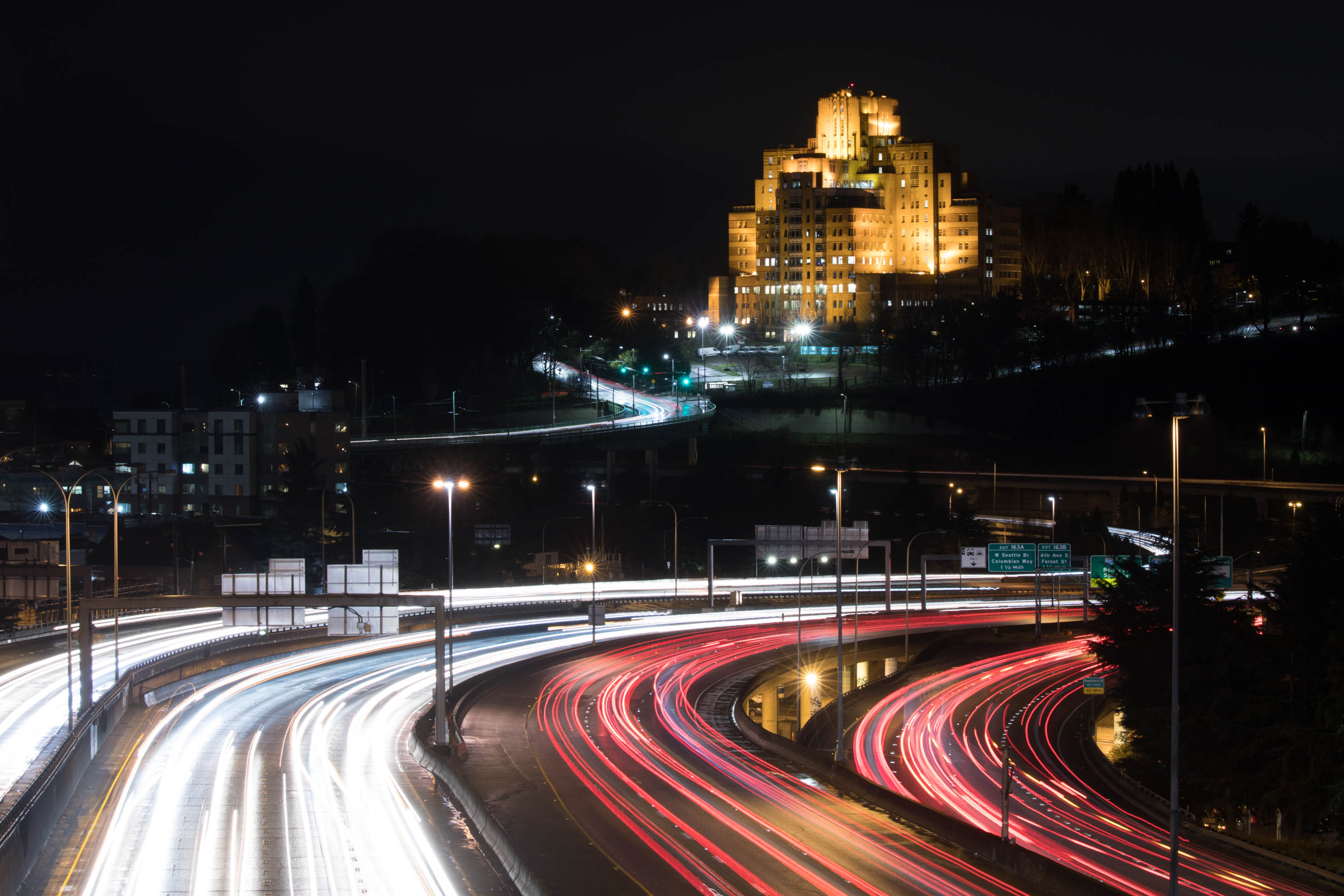 An evening view of the Pacific Tower on Beacon Hill, Seattle, with traffic on Interstate 5 traveling the highway. (Photo by Matt M. McKnight/Crosscut)

Early in her first year on the job, Mayor Jenny Durkan proposed an idea to ease Seattle’s increasingly terrible downtown traffic and reduce the city’s carbon emissions in the process.

It’s called congestion pricing, a wonky name for making drivers pay a toll when they enter a certain area of the city at certain times — usually the downtown core and typically only on weekdays or during rush hour. It’s seen a fair bit of success in London, Stockholm, Singapore and a few other cities around the world. The number of private vehicles entering central London dropped 39 percent in the first 11 years after congestion pricing was introduced. A Johns Hopkins study of Stockholm found that cleaner air from reduced traffic in the congestion-pricing zone led to 45 percent fewer asthma attacks in young children. If the mayor gets her way, Seattle would be the first city in North America to implement congestion pricing.

But when Durkan announced her intentions in April, the support from transportation advocates and urbanist types couldn’t match the skepticism coming from almost everyone else. Interestingly, both supporters and opponents voiced concern that congestion pricing would hurt lower-income residents already squeezed by Seattle’s skyrocketing cost of living. For people pushed to the edges of the city and beyond by high housing costs, inadequate transit service can make driving the only practical transportation choice.

It’s an issue Seattle will surely have to address to clear the high political barrier of a new downtown toll. In October, the city hired consultants Nelson Nygaard to begin studying how congestion pricing could work in Seattle without exacerbating existing inequities.

A new report from San Francisco-based transportation advocates TransForm makes the case that congestion pricing can be be implemented not only without hurting low-income populations, but can actually improve equity. Released today, Pricing Roads, Advancing Equity surveys existing congestion pricing and other road-tolling programs to come up with a model that might work for Seattle and other cities.

“If we can match real benefits for vulnerable communities at the same time we’re able to make more efficient use of our road space, we think there’s a real win-win there,” said TransForm Executive Director Stuart Cohen. (TransForm is a subcontractor working on Nelson Nygaard’s Seattle study, but the Advancing Equity study was produced independently.)

“There is no single region that is doing a model program,” said Cohen. But he pointed to several solutions from different cities that could complete the puzzle: Los Angeles’ successful outreach to get low-income communities the EZ Pass-style transponders needed for tolled HOV lanes, or London’s congestion pricing exemption for drivers with disabilities, or even Seattle’s own discounted transit fares.

The report argues that cities need four things to make congestion pricing equitable.The first is perhaps most critical: Cohen explains that bringing stakeholders from low-income communities into the planning process from the start is important because “planners and policy makers don’t always understand the obstacles that communities face in a detailed way. Too often, when plans are fleshed out before taking it to the community, they don’t fully address some of those most urgent needs.”

The other three elements are a little more self-explanatory. Offering a discount or exemption for low-income drivers entering the congestion pricing zone helps ease the burden of the added cost. Spending toll revenues on bus service improvements, especially in areas currently underserved by transit, helps get people out of cars. Investing revenues into public health initiatives like zero-emission electric buses and bike and pedestrian infrastructure can help offset the disproportionate impact transportation pollution has had on low-income communities.

Katie Wilson, general secretary of the Seattle Transit Riders Union, said she’s interested in congestion pricing as a way to reduce driving, increase funding for transit and reduce carbon emissions quickly. But she is skeptical that Seattle is ready to pull it off.

“Congestion pricing is unthinkable unless we step up and do a lot of foundational work,” said Wilson. “If this is going to be politically viable, we better get to work on bus lanes and bike lanes and pedestrian infrastructure. [We need to] make it so people feel like they actually have better options than driving.”