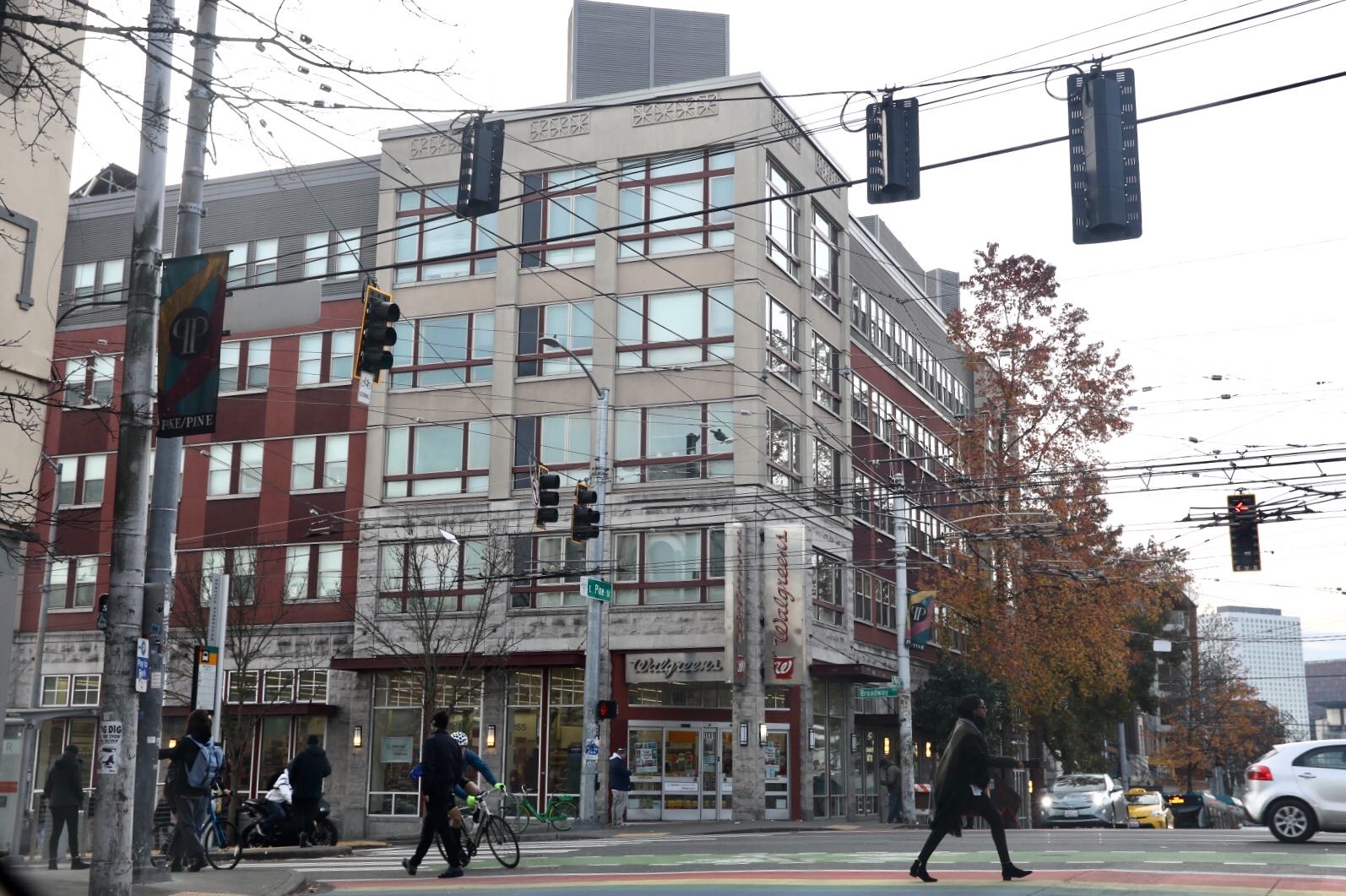 Broadway Crossing, a Capitol Hill Housing building near Broadway and East Pine Street on Capitol Hill in Seattle, has some tenants who use federal housing vouchers. (Photo by Matt M. McKnight/Crosscut)

If the shutdown of the federal government lasts, it could spell hard times for those tenants, who could see their rent money evaporate. But Shadbolt isn’t panicking yet.

HUD is one of nine federal departments that have seen their budgets get waylaid in a political fight, as the partial government shutdown drags on into its third week. Most of the department’s operations have ceased, but the functions that keep people housed — including via its voucher program — have a softer landing.

A letter sent by HUD to landlords last Friday, published by the Washington Post over the weekend, said Section 8 payments would continue during the first 30 days of the shutdown. On the same day, the National Association of Housing and Redevelopment Officials notified local housing authorities that administer vouchers that HUD had enough funding to keep the payments flowing through February.

If the government does not reopen by March, however, the money will run out. The question then becomes: Is the specter of millions of possible evictions enough to spur a deal to reopen the government?

Shadbolt is counting on it. “Overall, not really panicked at this point,” he said, adding, “At some point the adults have got to get into the room and figure out how to reopen the government.”

Rhonda Rosenberg of the King County Housing Authority shares Shadbolt’s view that the situation is not urgent yet.

“Obviously we are watching things with great concern,” said Rosenberg, adding, “We make an absolute commitment that landlords will get their payments on time. We’ll just do whatever we have to make sure rent payments aren’t interrupted.”

If the shutdown did stretch into March, it would be the longest in history, by far. Unlikely as that might seem, President Donald Trump has reportedly threatened to maintain the shutdown — borne out of his insistence on funding for a border wall — for “months or even years.” His press secretary, Sarah Sanders, doubled down on that possibility Sunday on Fox News.

If February comes and goes without a deal, housing authorities enter into the abyss. “We don’t know beyond that what would happen,” said Kerry Coughlin, communications director of the Seattle Housing Authority.

Coughlin said she believed the SHA could tap into some of its own reserves to maintain payments at least through March. But that’s very much a last-resort step. “Getting into the reserves puts us really on the edge,” Coughlin said.

Seattle and King County are two of 39 housing authorities across the country that are allowed greater flexibility in how they spend funds. Coughlin said that means each could potentially shift money from other projects to cover the housing payments. “We’d be scrambling around and putting together a plan to maximize the number of people to put on our [voucher] program,” Coughlin said.

The scrambling makes sense considering the hyperbolic-sounding effect of losing funding for housing vouchers. Literally millions of Americans use them for housing, both on the private market or in developments specifically meant for vouchers. In many cases, such funding keeps people from becoming homeless.

“The effects of not being able to pay for these programs are potentially catastrophic,” Rosenberg said.

The effect would be most acutely felt among voucher holders who live in privately owned rental units. If the voucher is void, landlords could legally begin evictions.

If it came to that point, Shadbolt said he would not evict a tenant because of the federal shutdown. “I think as long as the housing authorities indicate that they'd work to resolve the issues after the government’s funded … I definitely would think that most landlords would [not evict Section 8 tenants],” said Shadbolt, who also is the board president of the Rental Housing Association of Washington. “This is not a tenant’s issue. By law you could, but why would you?”

The state of Washington also recently signed off on a landlord mitigation fund of up to $5,000 per tenant to cover some potential problems, Shadbolt pointed out. The move is part of the state’s new law forbidding source-of-income discrimination. Shadbolt said landlords could potentially lean on that money as a buffer.

Other local tenants and landlords aren’t sounding the alarm bells yet, either. Violet Lavatai, executive director of the Tenant’s Union, a local tenant advocacy organization, said her office has not seen an uptick in calls. Similarly, Sean Martin, a Rental Housing Authority of Washington spokesperson, said he hasn’t heard much concern from landlords and hasn’t thought about it himself. “Now that I’m thinking of it,” he added, “maybe I should.”

Although landlords, tenants and housing assistance providers may not be in a state of panic yet, resolving the shutdown would nevertheless lift an enormous weight.

“I just want it to be back open,” Shadbolt said.