How a trip through Seattle helped World War I supply lines 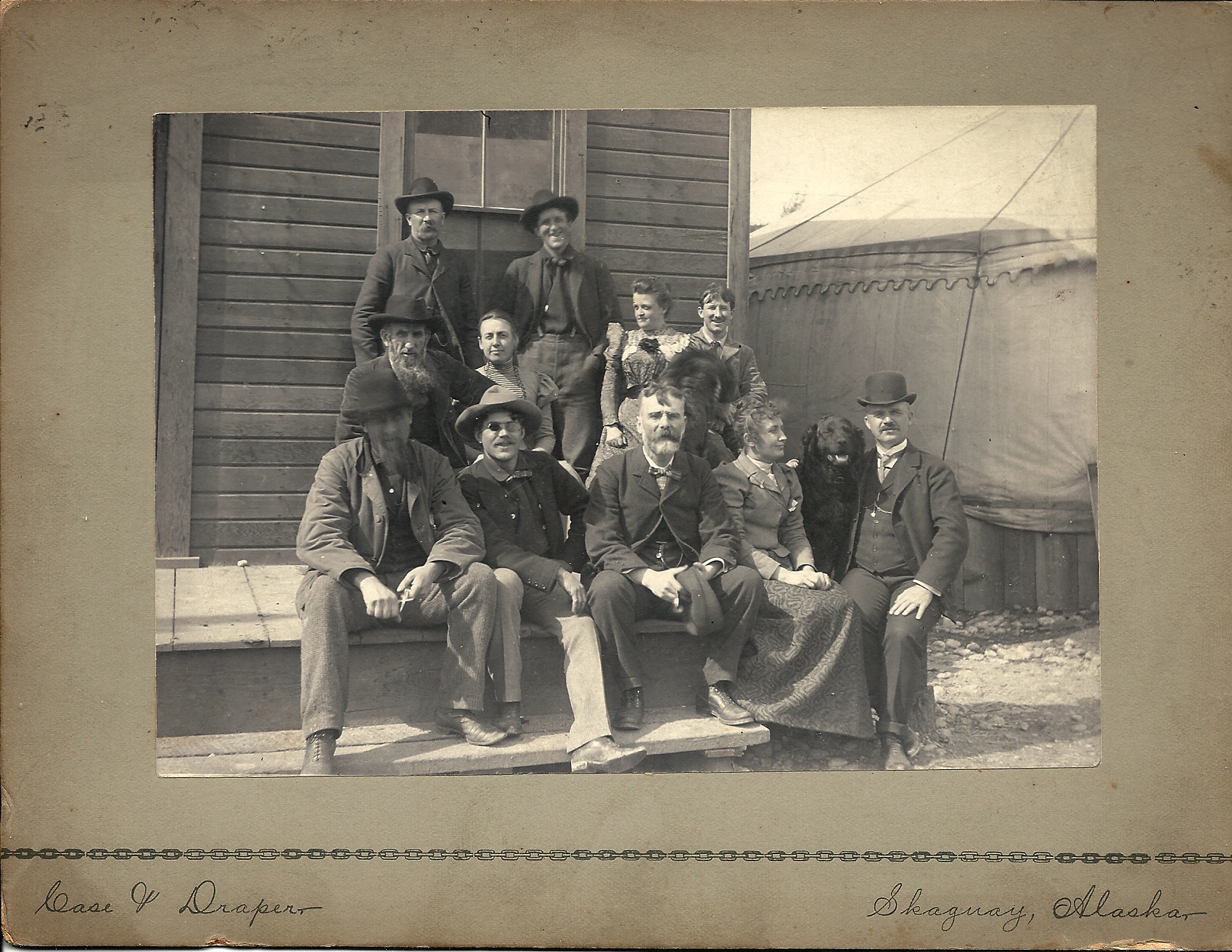 The author's grandfather, William E. Haseltine, is second from the left in the front row. The picture was taken while Haseltine was in Skagway, Alaska, in 1898, during the Klondike Gold Rush. (Courtesy of Knute Berger)

Over the holidays I had a chance to see They Shall Not Grow Old, the documentary by Peter Jackson of Lord of the Rings film fame. The movie restores, modernizes and colorizes film footage, mostly British, from World War I and puts you in the trenches of the “War to End All Wars.”

It is gripping, and it humanizes those who fought in a war that, for many, has slipped from human memory as the generation that fought it has died off (the last U.S vet died in 2011) and as subsequent wars, like World War II or Vietnam, have eclipsed WWI’s felt impact. It has been 100 years since America began to enjoy the postwar peace, although a flu epidemic and the Seattle general strike quickly disrupted daily life again.

I have been thinking about WWI not only because of last November’s anniversary of the end of the war, but also because I recently came across a battlefield artifact of that war brought home by my maternal grandfather, William E. Haseltine, and a sheaf of letters he wrote from France in 1918-19, when he served in the American Expeditionary Force.

As a result, I have learned a bit more about my grandfather’s war experience and, while he did not live in Seattle, the skills he learned after he passed through here, along with thousands of others, on his way to the Klondike Gold Rush in 1898. Those skills served him well during his brief time on the Western Front two decades later.

My grandfather was the son and grandson of engineers, and he attended the Massachusetts Institute of Technology. In his early 20s in the winter of 1898, he joined a friend, Tom Brackett, whose father was building a wagon road from Skagway, Alaska, to the gold fields in the Yukon. Mountains were a major barrier. Schlepping supplies over the legendary trail on White Pass was a Herculean, if not Sisyphean, task. The route also was known as the Dead Horse Trail for all the pack animals that died hauling goods to the gold fields.

The father of my grandfather’s friend Tom, George Brackett, was attempting to build a toll road that would ease passage for gear — a single team of horses would be able to drag 2,000 pounds through on the road. Hundreds of men were hired to hack the supply road out of the wilderness. It was a business fraught with treacherous conditions — snow, ice, mud — and outlaws who held up gold seekers.

Like many others, my grandfather made little money trying his hand at prospecting, but he came out of the gold rush whole, with some gold nuggets and stories. More relevant, he had learned about hauling enough supplies for an army in harsh conditions. The United States entered the war two decades later, and, now in his 40s, he found himself a U.S. Army major on the general staff at the War Department in Washington, D.C. He was serving as an engineer specializing in the troops overseas — then an unprecedented venture for American forces. How could you keep some 1 million “doughboys” equipped, fed, armed and communicating with each other in a massive world war unlike any fought before?

It was a challenge infinitely greater than schlepping gold pans and pickaxes in the Klondike. But as They Shall Not Grow Old vividly reveals, some of the same difficult conditions applied: mud, rain, the need to dig ditches and build bridges, suffering the elements for months on end, difficulty getting what you need when you need it.

Jackson’s film takes vintage WWI footage and modernizes it — slows it to the speed we’re used to seeing, not the sped-up, jerky footage of silent, hand-crank films of that era. He adds the recorded narration of British veterans who were there, and he adds color to the image so you can connect to them as human. And he shows images of war that are difficult to see: the results of enormous violence. He puts you in the trenches the way no one ever has before.

All this suggests the scope of what military engineers had to deal with. And beyond the physical and logistical barriers, there was the war itself, a startling shift that created a war mobilized both by horses and mules and making use of modern weaponry like primitive tanks, chemical weapons and machine guns. The scope of the fighting and slaughter was daunting. No one was bombarding the Dead Horse Trail while the sourdoughs of the Klondike were trying to navigate it.

The film made me realize how much my grandfather’s Klondike years must have prepped him for WWI’s supply and communications challenges. In 1918, he was sent to France to document and report on the vast military supply and communications system. What was going right? What not? Supplying the troops was a complex and massive effort that involved building infrastructure (roads, rails, ports, depots) to feed a modern war. He was told when he embarked in the fall of 1918 to expect the war to last another year, but it abruptly ended a couple of months later. He stayed well into 1919 to complete his report and visited every major battlefield.

Twenty years later, my grandfather was recalled to service in World War II, when, now a full colonel, he served as an instructor at the War College in Carlisle, Pennsylvania, teaching a new generation of soldiers what they might find on the ground in France if and when the U.S. arrived to liberate Europe from the Nazis. So the knowledge gained in Alaska and France helped to set the stage for D-Day.

My grandfather lived long enough that I knew him as a child and sat on his lap and heard stories about the gold rush and the war. His home in Wisconsin, which we would visit on trips from Seattle, was a virtual curio cabinet of intriguing items that included souvenirs from WWI. A space in the attic contained shells, shrapnel, uniforms and old guns he had picked up from the battlefields. On a wall he had mounted clips of communications lines that had carried major wartime messages. He also had mounted grenades from different armies. It was years after his death that the family discovered that one of them was still live.

After his death into my hands came a German helmet he had picked up, an article of great fascination to me. This is the artifact I recently found in storage. His stories and artifacts made the war somewhat real to me. (An interview about that helmet can be found in this video I did recently with Enrique Cerna at the Seattle Channel.)

Still, despite my personal and longstanding interest in the conflict, They Shall Not Grow Old was a powerful revelation — and moment of remembrance. Recently, I came across congressional testimony in which my grandfather's WWI superior, Gen. Charles Dawes, defended the sometimes-chaotic wartime efforts of the supply chain, “It’s all right now to say we bought too much vinegar or too many cold chisels, but we saved the civilizations of the world.” As I now understand, my grandfather’s youthful adventure in the Northwest gave him some of the tools he used in that effort.