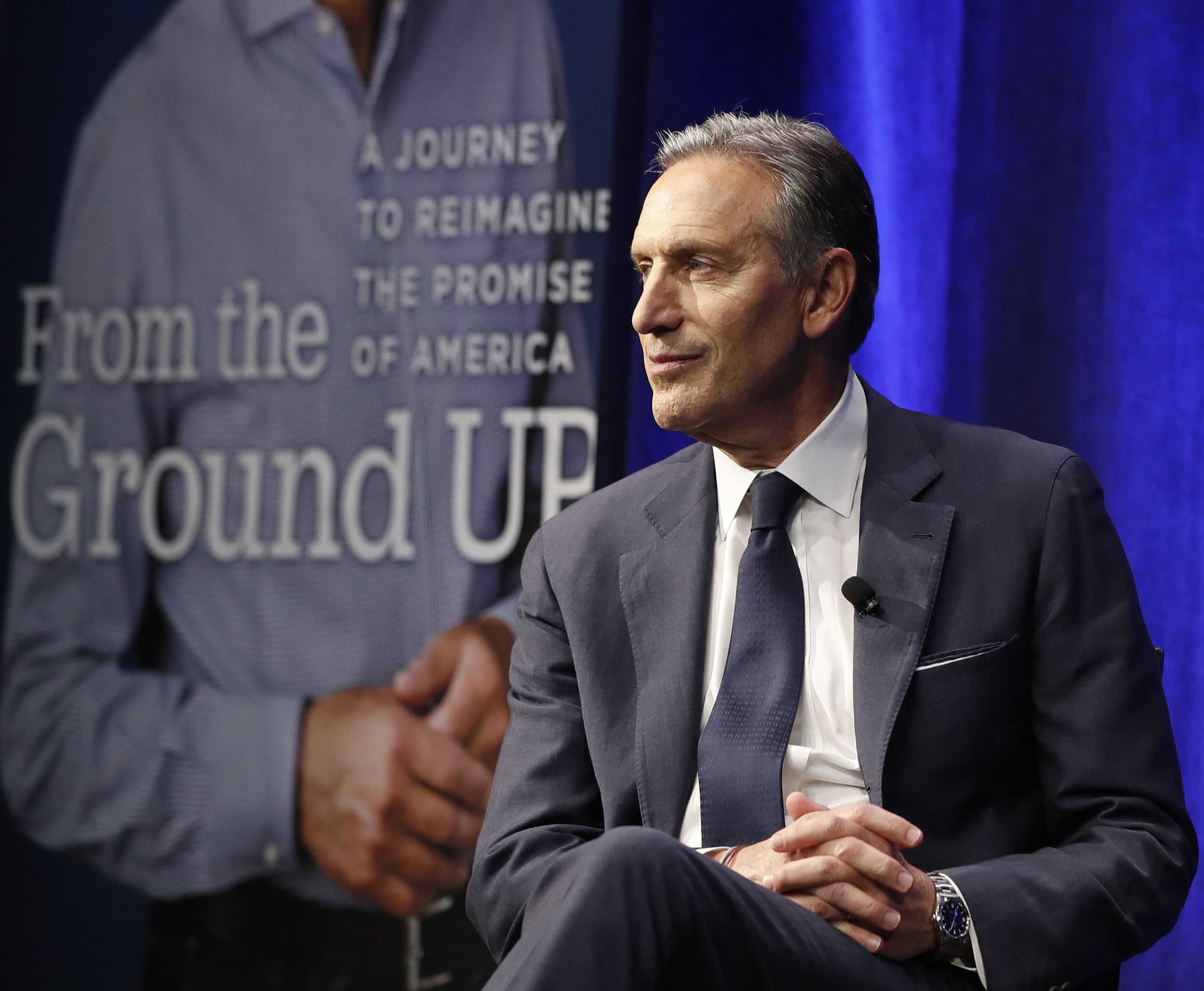 Former Starbucks CEO and Chairman Howard Schultz looks out at the audience during the kickoff event of his book promotion tour Jan. 28, 2019, in New York. Democrats across the political spectrum lashed out at the billionaire businessman on Monday after he teased the prospect of an independent 2020 bid, a move Democrats fear would split their vote and all but ensure President Donald Trump's re-election. (AP Photo/Kathy Willens)

Maybe the question to ask Howard Schultz is: What would it take for you not to run for president?

Could well be. But it might also upend American politics in a way no other third party bid has done since the mid-1800s.

Would that be a bad thing?

There wasn’t a lot of gender, racial and ethnic diversity in either party, or openness about sexual orientation. But there was far more diversity of viewpoint and philosophy within the parties.

Today, D.C. has become Great Britain, with a party of the left and a party of the right. Our two most recent presidents have little in common, but share one trait: Neither Barack Obama nor Donald Trump was able to garner bipartisan support to pass landmark legislation — the Affordable Care Act and Trump’s sweeping tax reform and reduction plan. Both measures passed on overwhelmingly party line votes, from committee hearings to floor amendments and final passage.

There’s something to be said in politics for occasionally exploding the middle and choosing a direction on an important policy matter. But on everything?

For candidates chasing the Democratic nomination, the party’s center of gravity is pulling them even further leftward —  something that matters more than it did a week ago as the party contemplates a possible Schultz campaign as an independent. In 2008, then-Sen. Barack Obama pledged, over and over again, that under his health care reform “if you like your plan, you can keep it.” He may not have meant it, but he knew it was important to offer that assurance. In contrast, California Sen. Kamala Harris, who announced her presidential candidacy last week, swept aside that pretense, calling  for “Medicare for all” that would end employer provided health care and individual health plans. It would cost trillions in additional taxes.

When Bill Clinton was campaigning for president with wife Hillary in 1992 (“Two for the price of one”), he declared that abortion should be “safe, legal and rare.” In late January, New York Gov. Andrew Cuomo signed a bill allowing abortion into the ninth month of pregnancy — and spiked the football by lighting up Manhattan’s Freedom Tower in pink.

When Hillary was campaigning for president, she pointed out that she had supported more money for additional border fencing between the United States and Mexico. So did some Senate Democrats years ago, including Chuck Schumer from New York and Joe Biden from Delaware. But House Speaker Nancy Pelosi now declares a wall on the southern border “immoral.” Leading senators and House members have demonized employees from Immigration and Customs Enforcement (ICE) and called for its elimination or “reinvention.”

Sen. Harris not only wants a huge expansion in health coverage, but she also wants people to attend college “debt free.” Enthusiasm is growing for Democrats to get behind a call by Rep. Alexandria Ocasio-Cortez of New York for a 70 percent tax rate on all earned income over $10 million.

Now in cities like Seattle, much of this Democratic talk sounds good. But across the nation? All of those positions — and the attitudes driving them — helps re-elect Donald Trump.

Especially in liberal and progressive communities, people forget that during the Obama era, congressional Democrats went from commanding majorities to a minority in the House in the first midterm and a minority in the Senate after the second. Plus, Democrats suffered a loss of over 900 seats in state legislatures, and the number of Republican governors increased from the high teens to the low 30s.

The 2018 midterms repaired some of the damage, with the Dems taking back the U.S. House with a 40-seat majority, but they actually lost two more seats in the Senate and still lag behind in governorships and legislatures. They have recovered less than a quarter of their lost legislative seats.

And yet here they are intent on going further left.

Until Howard Schultz showed up, appealing to moderate Democrats, liberals driven by principle instead of ideology and independent voters in the political middle that Democrats need to win. He is already on record criticizing California Gov. Gavin Newsom’s call for a state health-care entitlement, which Schultz said would exceed California’s current state budget. He criticized Ocasio-Cortez’s 70 percent income tax rates Monday night. And on CBS’ This Morning he sharply criticized Harris' call for talking about abolishing private health insurance. “That’s not American,” he said. “What’s next? What industry are we going to abolish next?”

Suddenly, the Democrats face incoming fire for ideological extremism not from the right, but from a lifelong Democrat with impeccable anti-Trump credentials, and who can buy a platform that liberal media outlets might otherwise deny him.

Washington Democratic Chair Tina Podlodowski zings Schultz for making the race about his personal ambition. Neera Tanden of the left-wing Center for American Progress calls a Schultz candidacy a “vanity project” and vows to start a Starbucks boycott if he follows through (hey, Neera, he retired as CEO in 2017 and left the building last June).

But if Schultz has the grit to endure the personal nastiness that is bound to grow if his candidacy gains traction, he may well save the Democratic Party from its own worst instincts by pulling it back from the left and forcing it to the center. The first 72 hours brought gale-force denunciations from progressive pundits, politicians and even professors. Schultz, surprisingly, shrugged it off and suggested that his critics were over caffeinated. His Brooklyn is showing.

As for Republicans rubbing their hands with glee at the prospect of Schultz splitting the anti-Trump vote, a word of caution: In 1992 when Ross Perot jumped into the race for president as an independent after a glowing profile on 60 Minutes, Democrats were worried that he would take votes away from their candidate, Arkansas Gov. Bill Clinton.

And he did. But he took more votes from then-President George H.W. Bush.