With mobile home fight, Sawant continues quest to ‘save’ Seattle 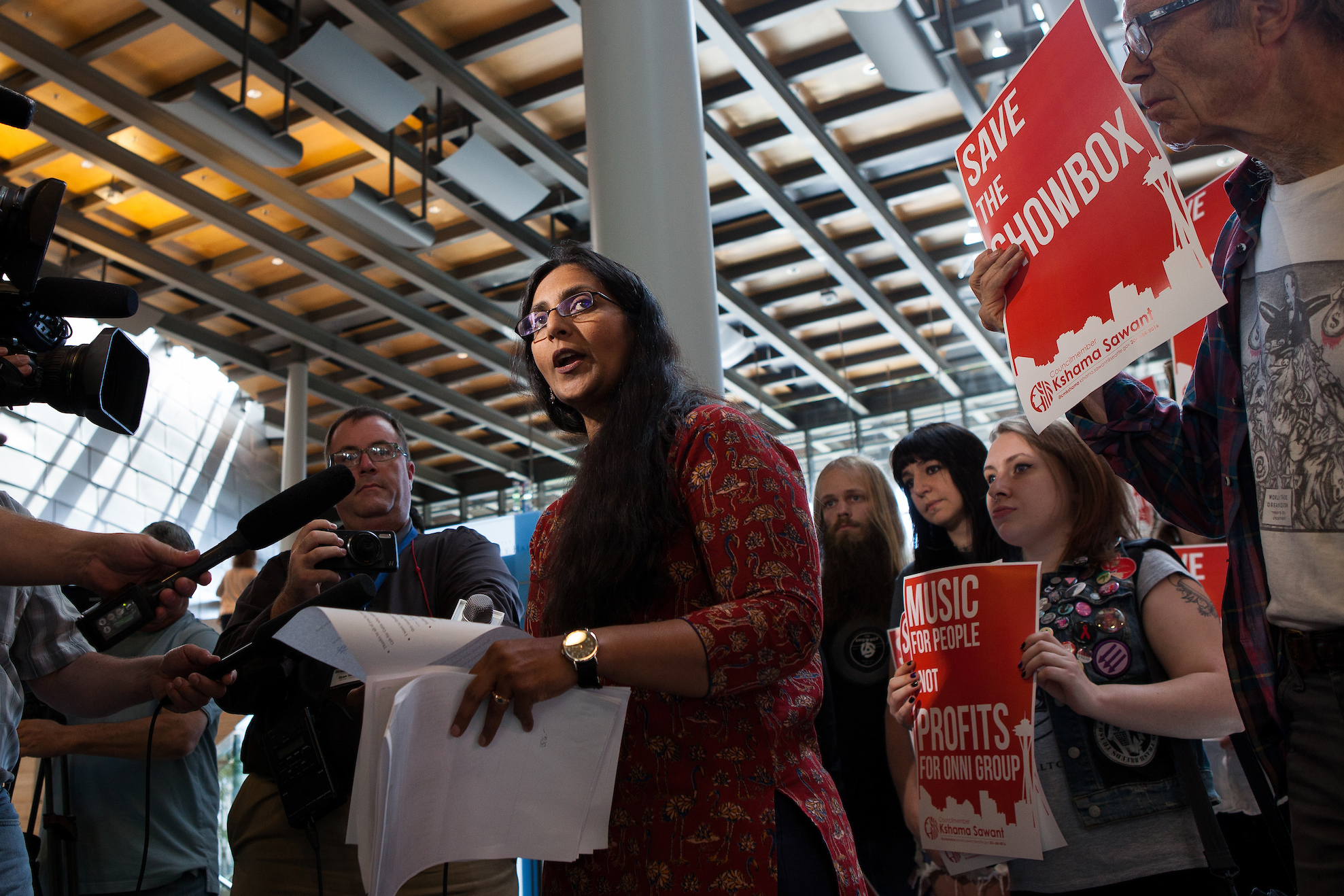 Councilmember Kshama Sawant holds a rally to protest proposed development at the site of the Showbox Market on Wednesday, Aug. 1, 2018, at Seattle City Hall in Seattle, Wash. (Photo by Jovelle Tamayo for Crosscut)

If Halcyon Mobile Home Park is sold and slated for redevelopment, resident Diane Cook, 64, said she’ll chain herself and her wheelchair to her home.

There are no buyers or immediate plans to knock down one of Seattle’s two remaining lots for manufactured homes, but the land near Haller Lake in north Seattle is up for sale, meaning developers are at least giving it a sniff. And for its residents, the stakes of losing the land are high.

“All my money, everything, is invested into my home,” said Christie Ross, 68, who’s lived in Halcyon since 2005. “I’ve put more money into that trailer than what it’s worth. I’m terrified, because I have nowhere to go.”

The stories of the residents have caught the attention of the Seattle City Council and, in particular, Councilmember Kshama Sawant, who has now engaged in a series of battles to preserve some properties from the city’s massive changes.

The council has agreed to consider a moratorium on any development of mobile home parks for a year. The pause would buy the council time to consider enacting a permanent zoning change to restrict what can be built on mobile and manufactured home lots, similar to what Portland enacted last April. The council will vote on the moratorium on Monday; a majority of council members indicated Tuesday they would support it.

The stories of Halcyon’s residents, who are mostly seniors, seem to represent the worst of Seattle’s success. As rents across the city have traveled permanently north of $1,000 a month, the critically endangered mobile and manufactured home parks represent a rare affordable opportunity for its residents. If Halcyon is leveled, its residents say homelessness is a real possibility.

Eloise Micklesen, 74, has lived in Halcyon for 15 years and pays the park’s owner $645 a month. “We take care of each other in the park,” she said. “It’s like having your support worker next door, because we look after whatever’s happening.” Gesturing to Cook, her neighbor, she added, “If she gets sick, we’re there. We all are involved in each other’s lives and our community.”

But the story is becoming a Seattle story for another reason. Like the Showbox fight that unfolded this last summer — and continues to play out in court —it’s another example of a frantic attempt to “save” individual pieces of Seattle, one of several led by Sawant. In addition to the Showbox and Halcyon, Sawant has also launched an effort to “Save Saba” — a central area Ethiopian restaurant facing displacement.

In waging these individual battles over what are largely private sector transactions, the city wades into legally tenuous territory. Although major parts of the Showbox lawsuit have been thrown out, the city is still being challenged for not being an objective arbiter when it came to considering zoning changes to protect the Showbox.

In Tuesday’s council briefing, Council President Bruce Harrell called a private executive session to ask the city’s lawyers about its options regarding mobile home properties. Councilmember Rob Johson said Tuesday that “the best way for us to act is with legal prudence.”

Sawant said in an interview Tuesday she’s not worried about the legal ramifications of the mobile home moratorium, mostly because Seattle paused development on mobile and manufactured home properties before, nearly 30 years ago. However, the city never enacted permanent zoning changes, in part out of fear it couldn’t hold up in court.

Beyond the legal implications, saving pieces of the city one by one is essentially an impossible task. Sawant, for example, has not sought to save Neighbours, an LGBTQ-focused nightclub that is up for sale in the council district she represents.

“It is my duty to help wage these battles and build movements around these individual questions,” Sawant said in an interview Tuesday. “At the same time, I think you're raising an important point because that is not the ideal way of governing.”

While Sawant acknowledges the whack-a-mole approach is limited, she said it’s the only option absent her preferred solutions: Massive investment in public housing and rent control.

“Ultimately when you see a complete absence of common sense and visionary policies from the city council, like expansion of social housing, like residential rent control, like commercial rent control, then what options are left for ordinary people?”

The likely moratorium comes at the same time as the council is discussing implementing its mandatory affordable housing (MHA) program in certain areas across the city — which would allow larger buildings in exchange for affordable housing payments. Councilmember Johnson indicated he would vote for the moratorium, but also said he wanted a to “understand a little bit more about the implications of the moratorium on the potential implementation of MHA in this neck of the woods.” Proponents of MHA have stressed the need for as close to uniform implementation of the program as possible, in part to avoid gold rushes on areas exempt from the mandatory payments.

Developer advocates argue it is precisely because of programs like MHA that the Halcyon land is sought after. “The problem here is that when the City limits supply with more rules, fees, and exactions like MHA fees, housing is scarce and that boosts the value of the land,” said Roger Valdez, with the developer lobbyist organization, Seattle for Growth. “That’s why this sale is happening.”

If the moratorium is approved on Monday, development will not be allowed on the Halcyon property for a year. Questions of whether to make a zoning change to permanently protect it will run through Johnson’s committee.

Asked if she’s hopeful, Halcyon resident Micklesen said, “I gotta be hopeful. I am hopeful because I just don’t believe that people can allow this to happen.”