The Highway 99 shutdown will last at least three weeks, but the council member thinks free transit should be permanent. 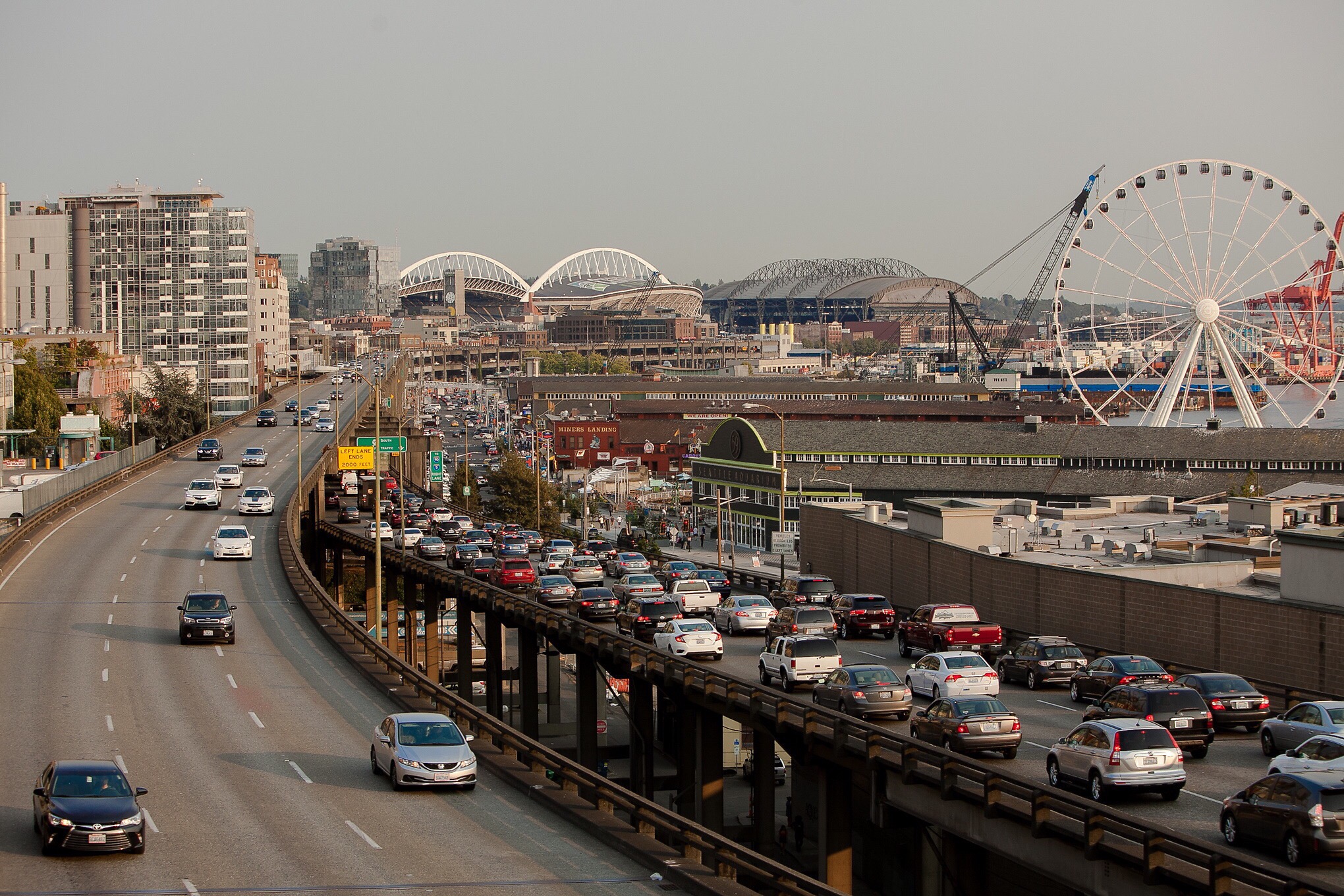 The Alaskan Way Viaduct is scheduled to close on Jan. 11, 2019, kicking off what the city is calling the "Seattle Squeeze" in earnest. (Photo by Jovell Tamayo for Crosscut)

Seattle Squeeze, Viadoom, Period of Maximum Constraint — whatever you call it, the worst of it will begin Friday when Highway 99 closes for three weeks and 90,000 or so daily Alaskan Way Viaduct drivers find other ways to get around while waiting for the replacement tunnel to open, hopefully in three weeks.

Officials with the city and county say they’ve prepared to keep things moving as best as they can during the shutdown. They will be running more buses, painting temporary bus lanes, doubling water taxi service, launching an on-demand shuttle service for commuters in West Seattle, temporarily eliminating parking on some downtown corridors to create more traffic lanes, encouraging people to work from home or work off hours, creating ride-share pick up zones and more.

Seattle City Councilmember Kshama Sawant does not think that’s enough. In a letter to Seattle Mayor Jenny Durkan and King County Executive Dow Constantine, Sawant called for King County Metro and Sound Transit to make all bus and light rail service free for the duration of the shutdown and possibly expand those free rides into the city’s post-Squeeze era.

“This would not only be a benefit for regular transit riders, it would also make public transit a more realistic alternative to driving for many working-class people, and encourage its continued use,” Sawant wrote. “That will mean fewer cars on the roads, less traffic, and less pollution as an additional benefit.”

Seattle would not be alone in its temporary implementation of fare-free transit, though it’s not usually done to mitigate bad traffic. In the face of air pollution, Salt Lake City, Seoul, Brussels and other cities have experimented with offering free transit.

If Metro and Sound Transit stopped collecting fares, the agencies would have to find a way to make up the gap.

Fares pay for about 27 percent of Metro’s operating costs. That number is about 43 percent for Sound Transit light rail. According to Sawant, making buses and light rail free during the three-week Highway 99 shutdown would cost about $10 million. The letter does not specify where that money might come from, but in the long term Sawant wants to see big businesses paying for transit. She did not respond to an interview request.

Asked about the council member’s call for free transit, the mayor’s office had no comment.

Spokespeople from Metro and Sound Transit both said that offering fare-free rides during the 99 shutdown was never on the table as a possible remedy because the agencies have policies requiring them to collect fares. Additionally, they both pointed to the existing ORCA Lift transit pass for low-income riders as an option for people who cannot pay full fares. King County is also developing a new low-income fare program for riders who still cannot afford ORCA Lift’s half-priced fares.

Metro spokesperson Jeff Switzer said rush hour buses are already quite crowded and that the extra riders drawn by free fares could create overcrowding problems. He explained, “Changing fare policy during the three-week ... closure wasn’t considered an effective way to reduce travel demand when half of downtown commuters already are on transit.”

Last month, a coalition of transportation and environmental activists called Move All Seattle Sustainably (MASS) released recommendations for improving transit, bike and pedestrian infrastructure to help encourage people to switch modes during the Squeeze. They called for more bus lanes, bikes lanes, better signal timing for walkers, and more. They did not call for free transit, however.

“Free transit is a great idea, but we also need to be adding significant capacity to the bus system,” said Katie Wilson, general secretary of Seattle Transit Riders Union, a member of MASS. “We need a concerted effort by the city, county and transit agencies to add capacity so the system can carry far more riders. Part of the way to do that is through speed and reliability improvements and dedicated bus lanes.”

“If you have free transit, but it’s still stuck in traffic, nobody’s going to use it anyways,” he said. “Good service is what gets people to use transit. You have to make it competitive with other ways of getting around.”

Wilson does want to see more employers making transit free or less expensive for employees with subsidized passes, especially for low-wage downtown workers serving coffee, staffing shops and cleaning offices and hotels. It’s common for white-collar employers to pay for some or all of the cost of an ORCA card, but a rarity for retail and service industries.

Sawant’s call for fare-free transit extends beyond the 99 closure. She wrote, “The region’s transit needs should be fully funded with big business taxes, with expansion of routes and frequency of bus service to make it viable for working families to not have to regularly depend on cars.”

It turns out Sawant is not alone in her vision for fare-free transit service. David Gordon, a policy analyst with Seattle-based consulting firm Nickerson & Associates, has been laying the groundwork for a ballot measure to fund transit in King, Snohomish and Pierce counties with a 1 percent payroll tax.

Gordon told Crosscut that a payroll tax for transit could help ease financial burdens for low-income riders, increase overall transit use and reduce reliance on funding from sales taxes, which are regressive since they take a larger percentage of a low-income resident’s earnings than they do from a high-income resident.

About 70 to 80 percent of transit funding in King, Pierce and Snohomish counties comes from sales tax. Gordon’s idea is to create a 1 percent payroll tax similar to Medicare and Social Security taxes. The tax would be paid by both employer and employee with an exemption on the first $30,000 in income to ease the burden on low-income residents.

Gordon estimates that in King County alone, a 1 percent payroll tax would generate $2.15 billion, well more than Metro and Sound Transit’s combined $1.26 billion annual operating cost. Since free transit would likely attract new riders, the extra funding could be used to expand service and invest in infrastructure to make transit ride times more competitive with driving. Gordon said sales taxes could also be reduced 1.5 percent, since they would no longer be needed to fund transit.

Making the idea reality is sure to be an uphill fight. The state Legislature would first need to pass a bill giving King, Snohomish and Pierce counties the authority to create the payroll tax. Then a campaign would need to collect signatures to get it on the ballot before persuading voters to pass it.

But come Friday, when the viaduct closes for good, it is all but guaranteed that transit will remain full fare during the Squeeze.