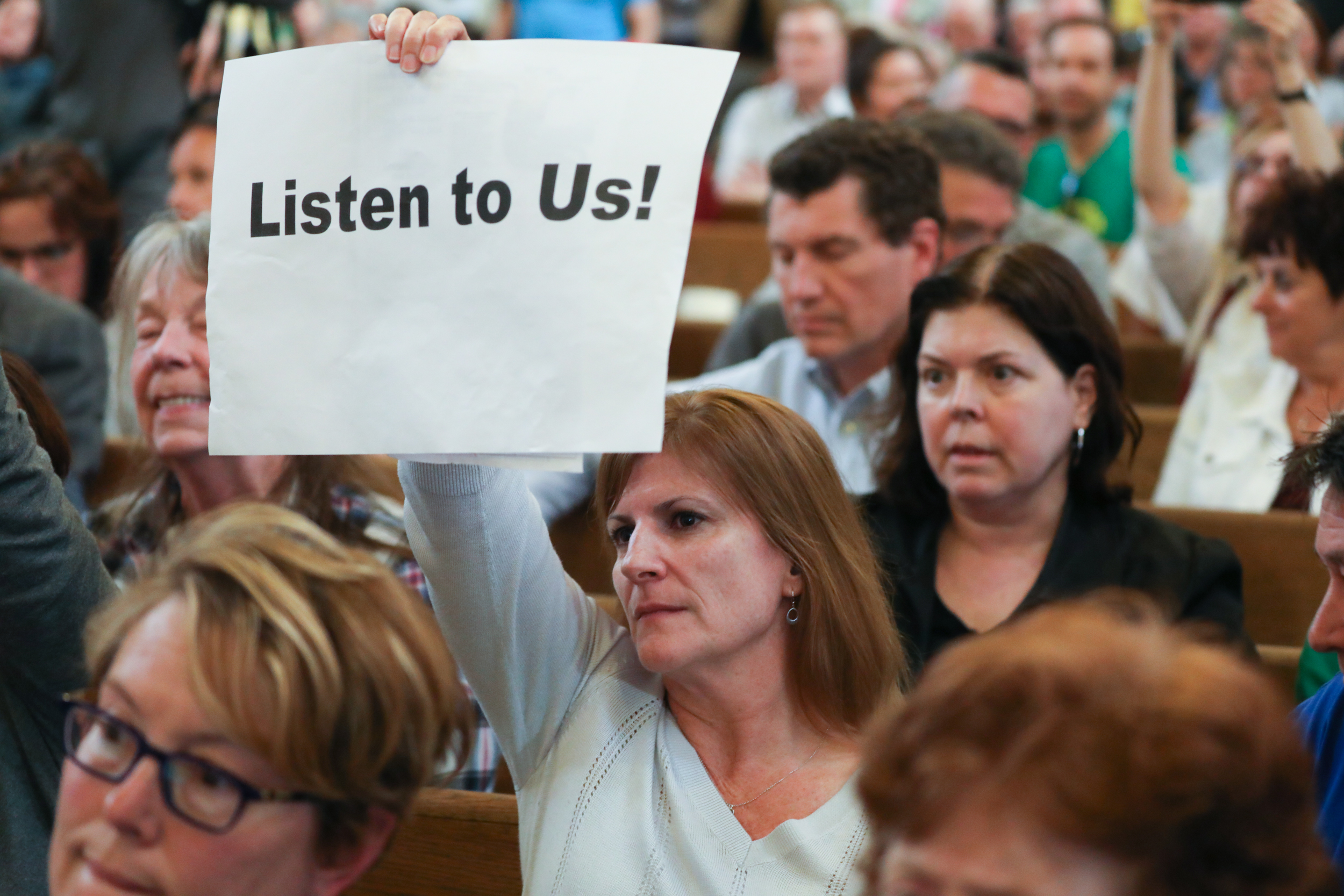 It quickly became a running joke in City Hall: At every opportunity, Councilmember Debora Juarez would steer the debate toward District 5 — or just “D5” — the vast north Seattle landmass she was elected in 2015 to represent. She hosts D5 happy hours in D5 bars, suggests books to read while taking transit from D5 and even signs her text messages “DJD5.”

But with 2019 promising an unruly and crowded campaign season, the joke is suddenly on everyone else. Seven of nine council seats are up for grabs and, so far, the incumbents who have most successfully cast themselves as district politicians — namely Juarez and Councilmember Lisa Herbold — are also seen as the least vulnerable.

Meanwhile, newcomers vying to knock off an incumbent or claim an open seat are doing so by hammering on their district bona fides. Regardless of where they land on Seattle’s political spectrum, this year’s class of council wannabes are almost uniformly promising to be more responsive to voters’ concerns than the current sitting council. While the newcomers’ stated passion for their respective districts could be genuine, or not, the pressure from voters is apparently great enough to make hyperlocal representation one of the top talking points in the races to fill seven of the council’s nine seats. It is one issue that could reshape a council that will welcome at least three new members after November’s election.

“It really excites me to be focused on a specific area,” District 7 candidate Michael George said, echoing a near-unanimous sentiment among council hopefuls who spoke with Crosscut.

Voters had their first opportunity to choose council members based on neighborhood four years ago, but 2019 is quickly shaping up to be the first true district election — one in which apparently every candidate, new and old, is betting heavily that what constituents want more than anything is someone to hear their concerns — be it the missing-link bike lane in Ballard, the Magnolia bridge, potholes writ large, or displacement in the south end.

“This election we’re actually going to have people running who have real significant roots in their district,” District 4 candidate Shaun Scott said.

And if a new slate of council members is indeed swept into office next year on promises of being a better district representative, the Debora Juarez style of governing could become more the norm than the exception.

Seattle had been governed by a council of citywide representatives for more than 100 years, until 2013, when voters approved a switch to district representation, with two at-large citywide positions. The effort was bankrolled almost entirely by Faye Garneau, a north Seattle businessperson who can safely be called one of Seattle’s few conservative activists — she played co-host to a Donald Trump fundraiser in 2016. Garneau sunk $250,000 of her own money into the effort. Districts, she told news outlets at the time, would create more accountability.

The referendum passed. But the effect on the subsequent 2015 election was blunted in part by confusion among voters and the pigeonholing of citywide council members into district candidates.

Some incumbents called it quits. Of those who remained, however, their campaigns still mostly echoed their citywide platforms. Councilmembers Mike O’Brien, Sally Bagshaw, Bruce Harrell and Kshama Sawant became neighborhood politicians, but to say they did so on a district platform would be a stretch. “On election night, a big win for Seattle normal” was Crosscut’s election night headline at the time.

But in the following years, voters have been trained to look to a specific council member for answers to their particular issues. Email the wrong council member and his or her staff is likely to bounce constituents to their proper representative. Council members were given a budget to host office hours within their districts and have become more common figures within their boundaries — walking the streets, appearing at farmers markets, hosting in-district office hours.

As constituents came to realize that they had a specific council member, interactions with the public could be occasionally heated. O’Brien, in particular, has faced intense backlash within his District 6, in and around Ballard. Despite the council’s broad struggles to address the growing homelessness population, he has been singled out by his community, including during a hostile town hall last summer. A few days later, he was kicked out of a community celebration for the new Nordic Heritage Museum.

“It wasn’t clear that voters were focused on what the benefits [district representation] could bring to them in terms of getting better constituent services,” District 4 candidate Alex Pedersen said. “But as time has gone by, I’ve heard from more and more people, ‘My council member doesn’t respond to my emails’ or ‘My council member seems focused on national politics rather than responding to property crimes occurring in our neighborhood.’ ”

Recent polling showed more voters disapprove of the council’s performance than approve. But rather than directing frustration toward an amorphous body, voters now have a specific person to blame.

Although the district system was championed by a conservative activist, the increased emphasis on district politics in 2019 has been across the political spectrum. With his cautious approach to zoning and opposition to a business tax, Pedersen would be among the more conservative council members if he were to win.

In District 2, candidate Tammy Morales is running to the left of retiring Councilmember Harrell, who has served for more than a decade. Yet representing south Seattle is among her main motivating factors for running. From her vantage point, being a candidate for District 2 means a more acute focus on preventing displacement and gentrification and doing it in a way that the community supports.

“We voted for district representation because we want people to be problem solvers for the district and really advocates for the things the district needs and wants and who feels our priorities,” Morales said. “And I don’t think that’s happened, at least not in my district.”

A common complaint among the challengers and newcomers — regardless of their political leanings — is the perceived lack of responsiveness from their current council member. Although it’s still early, the candidates running say they hear it constantly from their would-be constituents. “When you don’t have leadership that’s as responsive as it can be, there’s a certain sense of frustration that sets in,” Scott said.

“I would aspire to be very responsive,” District 7 candidate Andrew Lewis said.

In District 3, which centers on Capitol Hill, Beto Yarce is hoping he can defeat Kshama Sawant on her responsiveness. “I keep hearing over and over that Sawant is not being responsive to District 3,” he said.

Speaking at her re-election campaign launch last week, Sawant called that line of attack “quite absurd,” saying people come up to her all the time with myriad issues. “We work tirelessly to help with those issues,” she said.

At the same time, Yarce himself has to convince voters he’ll properly represent the district. He’s in the process of moving into District 3 from north Seattle, a point that District 4 candidate Scott — himself a Sawant ally — has already used as a jab against him. Yarce said his connection to the neighborhood goes back 15 years and he left only temporarily  to live with his partner.

The races have not yet seen the expected onslaught of candidates, but that is likely to change as we near the May filing deadline. As the contests do heat up, fights over who’s best for the district could become more granular. For some candidates, that’s a good thing. “This was part of the reason why Seattle had made the shift to district level elections,” Scott said. “It actually creates a scenario where we’re having fistfights in a phone booth. That’s easier than an entire boxing ring.”

Once the dust settles, the winners will have to start delivering for their particular districts.

As council budget chair this past fall, departing Councilmember Bagshaw said she saw more of a “bring home the bacon” attitude as council members fought for specific projects within their district, such as the African American Museum in District 2 or the innovative Aurora Commons day shelter in District 5.

Districts have also begun to play a heavy-handed role in the council’s ongoing discussions about zoning changes. Some members are more bullish about adding density to their neighborhoods while others are more reticent. District 4 Councilmember Rob Johnson, a density advocate who’s not running for re-election, has called for even larger buildings near transit than what the council’s current plan calls for. Meanwhile, Herbold in District 1, centered in West Seattle, is calling for smaller density increases.

These fights could sharpen if the candidates promising more responsiveness win seats. The state of the Magnolia Bridge, for example, is quickly becoming a key issue for candidates running to replace Bagshaw in District 7.

“There will be at least one member of the city council that is going to be a really staunch advocate for that bridge,” Lewis said. “If it were all citywide, I don’t know that it would have the same impact or not.”