Seattle's love affair with bike commuting: It's over 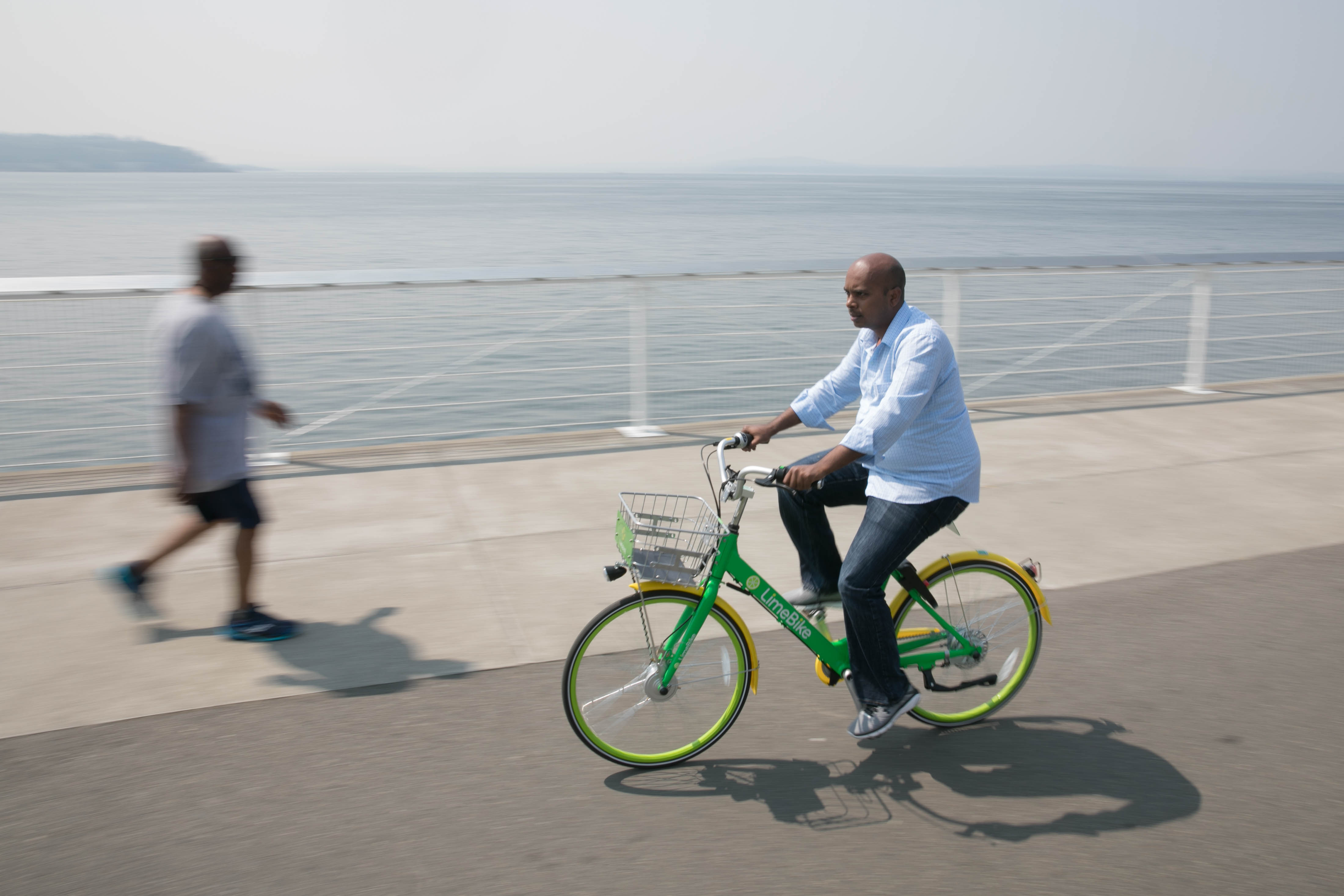 A man rides a bike-share LimeBike along the Puget Sound at Myrtle Edwards Park in Seattle, Washington on Aug. 8, 2017. (Matt M. McKnight/Crosscut)

Once in a while, a poll comes out that tells the emperor that he has no clothes. That’s the case with a new Seattle Times/Elway poll, which undressed the city’s transportation establishment of its pretense that much of what it's doing is working, let alone popular.

Transportation is one of those rare issues where people seem to make up their minds by what they see and experience daily, rather than what they hear from friends or read about in the media.

How about charging a toll to drive into Seattle? What a dumb idea, said 70 percent of city residents. Boy, I’ll say, agreed 71 percent of suburban dwellers.

What about allowing developers to build apartment buildings with no parking to encourage people to take transit? As a Bellevue city planning commissioner, I’ve seen builders and city bureaucrats build alliances to try and lower parking requirements to cut the developer’s costs while making it more onerous to drive. Partly owing to the results from Seattle’s lack of parking requirements for apartments, we always say no.

It seems that the transportation establishment in King County (Metro, Sound Transit and the Seattle Department of Transportation) reached one conclusion. And most people in King County — whether in ardently liberal Seattle, less overwhelmingly liberal edge cities like Kirkland, or more moderate and distant suburbs like Woodinville and Kent — reach another.

The issue that best illustrates this point is Seattle’s forced love affair with bicycles. The city advertises itself as one of America’s premier pro-bike destinations. And on paper it ought to be. Lots and lots of young people. Plenty of environmentally aware residents. No shortage of folks looking for low-cost alternatives to buying and maintaining a car. And have you checked out the cost of parking?

So enthusiastic is city government about bicycles that it once owned a bike-share company (an expensive lesson in what government shouldn’t do). A former mayor was nicknamed “Mayor McSchwinn.” 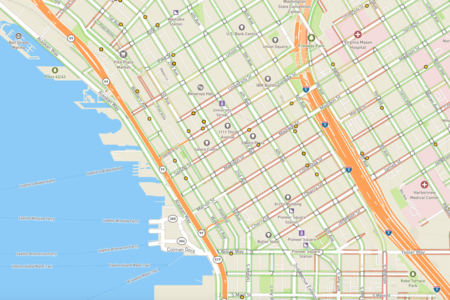 Seattle's hills are the worst. Here's a way to cope.

AccessMap marks the blocks with the steepest inclines in red. 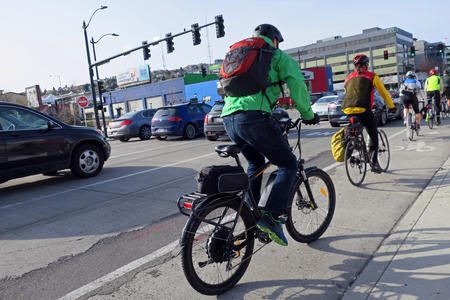 As e-bikes become increasingly popular in Seattle, they're transforming both commutes and the market. 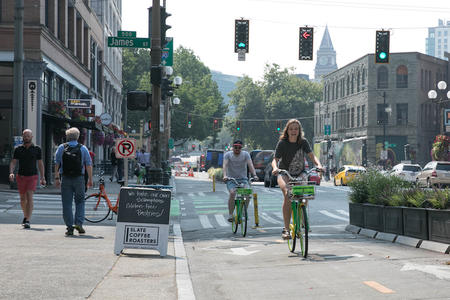 Fewer and fewer women are walking and biking. Seattle needs a reckoning.

But the Times/Elway poll shows a chilled relationship with bikes. When asked if they favor or oppose the development of more bicycle lanes, only 40 percent of city residents support it, while 56 percent oppose it — virtually the same ratio of opposition as in the suburbs. In fact, on the intensity scale, slightly more city residents “strongly” oppose more bike lanes, 29 percent in Seattle to 28 percent in suburbia. Even more revealing is that only half as many Seattle residents — 14 percent — say they strongly favor more bike lanes in Seattle.

But building more bike lanes is what departing-before-he’s-swept-aside Seattle City Councilmember Rob Johnson and embattled incumbent Mike O’Brien are pushing as a top priority in transportation.

Because of public demand? Hardly. Despite almost evangelistic fervor for bike lanes among the small, but vocal and impressively organized activist groups and the kindred spirits in SDOT, bicycling in Seattle (for commuting, not recreation) has dropped by more than 25 percent in two years from 4 percent to 2.8 percent. So did the absolute number of bicycle commuters. Declining enthusiasm for more bike lanes in the Times/Elway poll reflects the falling interest in bike commuting.

These numbers completely contradict the conventional wisdom about biking in Seattle. Never has it been easier than it is today for more people at more times in more places to find a bike and ride it — whether they own one or not. And yet the numbers for bike commuting aren’t rising.

For recreation, sure, bike riding is fun. And it’s a great way to work out, though growing numbers of people find it safer, easier and increasingly convenient to do it on machines indoors. But for commuting or large-scale tourist travel, there will never be large numbers of bicyclists.

We are not Copenhagen. We never will be.

And it’s not for lack of trying. Bicycling magazine named Seattle the best bike city in America in October, an acknowledgement of the work done by bike enthusiasts in and out of government since the 1970s. The guiding belief on bike lanes was, “If you build them, people will pedal.” But look at the growing number of transit options — bus, rail, public and private van pools — or telecommuting from home. Or walking, where you can at least carry an umbrella. And Uber.

For what it’s worth, the decline in bicycle commuting is happening across America. According to the Census Bureau, between 2016 and 2017, it’s down by nearly 20 percent in San Francisco, 24 percent in Austin, and more than 12 percent in Boston.

More bike lanes aren’t going to lift those numbers any more than the additional bike lanes in the past five years have. When bicycles aren’t fun to ride, most people, even those who own and like bikes, won’t ride them. And riding in clogged urban traffic isn’t fun.

Especially in a city with too many hills and too much rain. 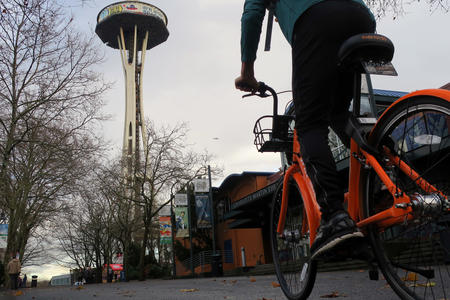 Three private companies — Spin, ofo and LimeBike — have dropped 9,000 easily rentable two-wheelers onto our streets, placing us firmly at the forefront of American cities with dockless bike-share...

Seattle's hills are the worst. Here's a way to cope.

AccessMap marks the blocks with the steepest inclines in red.

As e-bikes become increasingly popular in Seattle, they're transforming both commutes and the market.

Fewer and fewer women are walking and biking. Seattle needs a reckoning.

by / November 12
Article continues below

Three private companies — Spin, ofo and LimeBike — have dropped 9,000 easily rentable two-wheelers onto our streets, placing us firmly at the forefront of American cities with dockless bike-share...