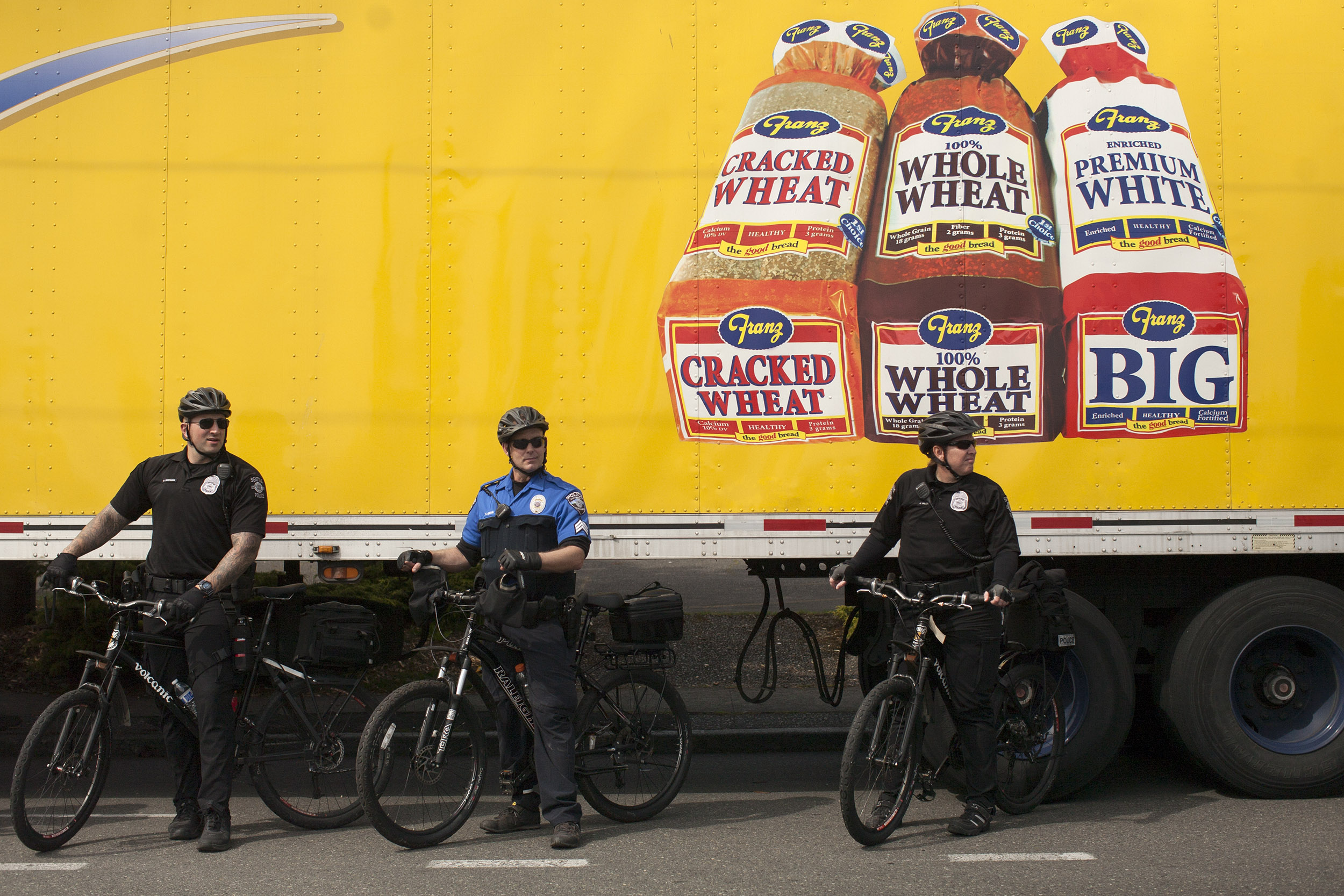 Seattle police during a May Day demonstration. (Photo by Matt M. McKnight/Crosscut)

In the clearest sign yet of what the Seattle Police Department calls its “staffing challenges,” a top leader has told detectives they could return to the streets on patrol in the coming months.

According to an all-staff email sent by Deputy Chief of Police Marc Garth Green and obtained by Crosscut, those employees would normally not be asked to do patrol work, but detectives will be required to receive training on current patrol protocols in case of “intermittent” staff shortages.

The notice, sent Wednesday afternoon, is the latest in a yearslong discussion about growing the department in step with the city. It also comes as police officials speak more openly about recent struggles to find new recruits.

“Redeployment decisions will not be made lightly and only when required for the department to continue providing necessary service,” wrote Garth Green.

In addition to retraining detectives for patrol duty, undercover officers will be trained to process online police reports and nonemergency telephone calls, “a step that will free up patrol officers to respond to immediate needs,” according to the email.

The changes have been a long-rumored response to a lack of patrol officers, according to one SPD employee, who is not authorized to speak to media. Garth Green’s email is the first time the new policy has been so clearly laid out, the employee said.

The decision by SPD’s leadership to shift resources toward patrol is driven by a protracted struggle to maintain — much less increase — department staffing numbers. Recruiting problems have been no secret.

In a July press conference, Mayor Jenny Durkan said of the department, “We’re in the net positive still. We’re recruiting more people than are leaving.” But by budget season a couple of months later, that was shown to be incorrect. Despite a 2015 promise from then-Mayor Ed Murray to grow the department by 200 officers over several years — one reaffirmed by Mayor Durkan — the department was on pace to actually shrink by 33 officers by the end of 2018 as attrition outpaced hiring. City officials did not respond to a request for the year-end total, although Seattle Police Officers Guild Vice President Sgt. Rich O’Neill said Thursday that the loss ran higher than 33.

SPD spokesperson Sgt. Sean Whitcomb said there are no immediate plans to actually deploy the detectives on patrol and the decision to retrain them was prudent preparation.

“Our desire to hire more officers is not a secret, and some of the challenges we’ve faced we’ve been very upfront about,” Whitcomb said. “This email acknowledges the need to be prepared in the event of supplementing patrol officers without concluding investigations personnel will in fact work in patrol operations capacity.”

Detectives have worked as patrol officers at some point in their career, but for many that may have been many years ago. In the meantime, rules and procedures may have changed — including, to cite one prominent example, the use of body cameras.

In his email, Garth Green promised SPD would “bring them current with patrol training,” but O’Neill said he’s concerned.

“Giving them a crash course in how to do things hopefully doesn’t lead to anyone getting hurt,” he said in an interview. “I could see complaints rising. They’re out of their expertise. Their expertise is in follow-up work and investigations.”

O’Neill said he appreciates leadership recognizing what he believes to be a chronic shortage of officers. But he called the solution “putting a small Band-Aid on a major artery bleed.” If detectives are pulled away from their normal duties, leadership can expect a letter demanding the changes be bargained with the union.

“This is unprecedented in my 38 years,” he said. “If they’re going to be taking them away from their normal job, that’s problematic because the entire department is short-staffed. The detectives have work to do, so if they’re pulled away from their desk to do patrol work, their work is going to pile up on their desk.”

Some local commentators have spoken of a “mass exodus” of officers, but a department could shrink by simply failing to replace retiring officers.

During her confirmation hearings last summer, Chief Carmen Best blamed the drawn-out contract negotiations between the rank-and-file Seattle Police Officers Guild and the city for making Seattle unattractive to new recruits. Until last fall, when the Seattle City Council approved a new contract, officers were still being paid at 2014 levels, because of the lack of a new contract.

With a new contract approved in November, Seattle police officers are now the best paid in the state. However, they have not received promised back pay for the time they worked without a contract. That money is set to go out in February.

New recruits must go through the state police academy, in-house training and a probation period before they’re fully functional patrol officers, so if the new contract bolsters recruiting, the effect wouldn’t show up in patrol numbers until late this year.

The ideal recruit, in fact, is a fully trained officer who can be poached from a different department. Seattle has recently stepped up its efforts in other jurisdictions, including in Hawaii, the nonprofit news site Honolulu Civil Beat recently reported.

In the event it becomes necessary to deploy Seattle detectives on patrol, it’s unclear if those shifts would be voluntary, akin to working a secondary job for overtime, or if detectives would be required to pick up shifts. O’Neill said the union’s response will depend on the answer to this question. 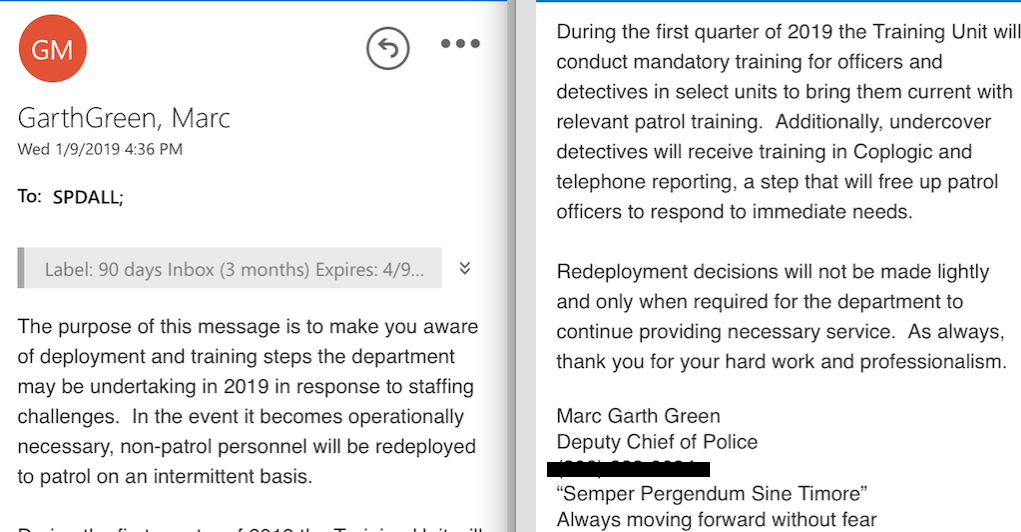