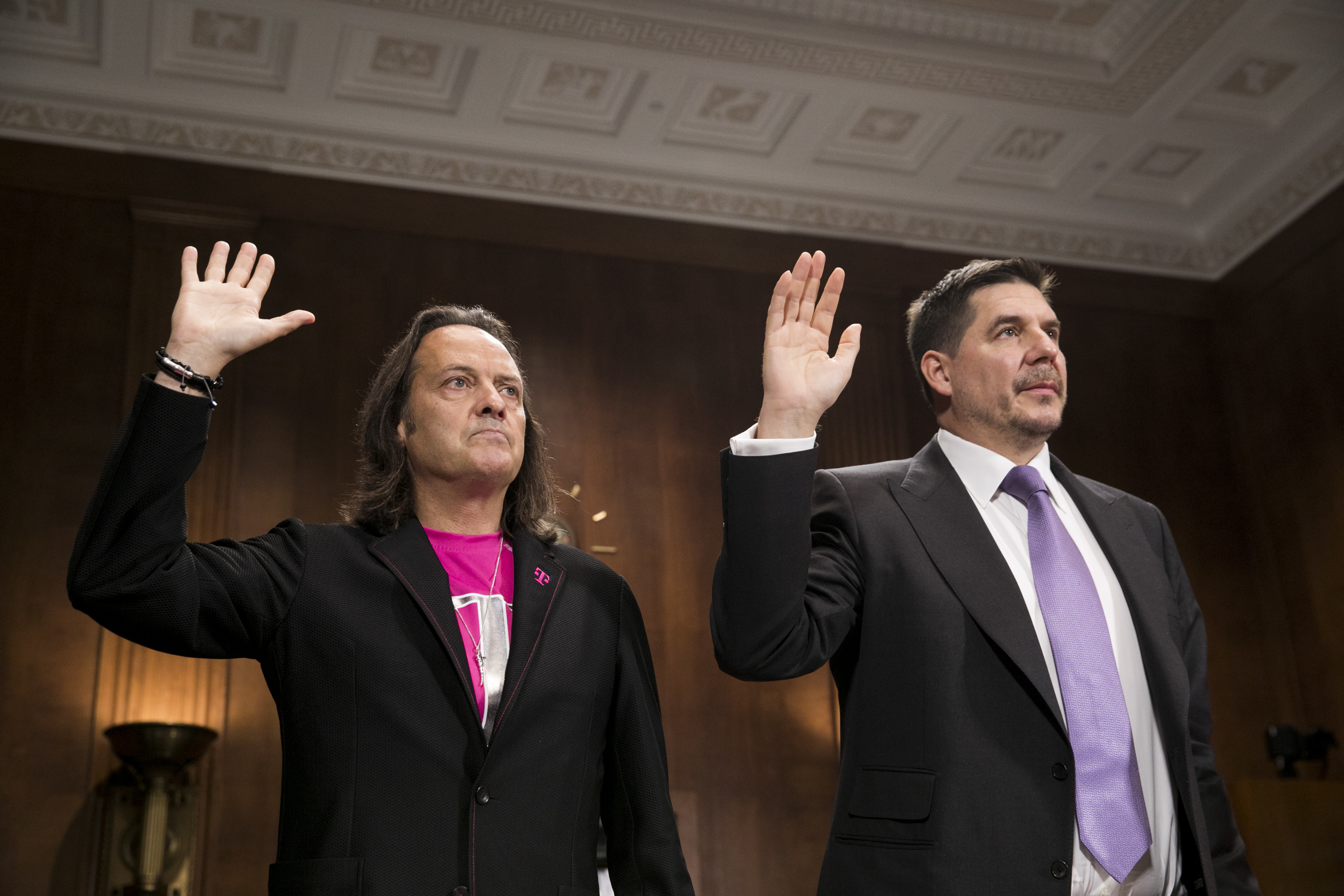 John Legere, CEO of T-Mobile US Inc., left, and Marcelo Claure, executive chairman of Sprint Corp., right, are sworn in before the Senate Judiciary Subcommittee on Antitrust, Competition Policy, and Consumer Rights during a hearing on the pending T-Mobile and Sprint merger in Washington, D.C., on June 27, 2018. (Photo by Kristoffer Tripplaar/Sipa USA via AP Images)

Last month, the editorial board of The Seattle Times issued an opinion so tepid and uncritical of a corporate overlord that it received advance, if unintentional, mockery in the paper’s own pages.

“T-Mobile Park is an outstanding choice for naming the publicly-owned ballpark leased by the Mariners,” wrote the editorial writers on Dec. 20, apparently without irony. “This is also a positive ending to lease negotiations with the team that became overly politicized this year.”

Eight days before that bit of editorializing, Seattle Times columnist Danny Westneat, who does not sit on the editorial board, had opined, “Speaking of awkward, could there be a more soul-deadening name for our baseball stadium than ‘T-Mobile Field’?’”

While the editorial board was gleeful at the prospect of a telecom giant adorning our baseball stadium, Mariner corporate doings were apparently too minor to merit editorial board attention when, five months earlier, the paper’s own reporters revealed troubling accusations by female employees some years ago against three of the Mariners’ top executives, including current club CEO and President Kevin Mather.

As for the editorial board’s assessment of the “over politicization” of the ballpark’s lease: sure, the battle was a complicated affair, tinged with bitterness, that touched on some of Seattle’s most sensitive issues. But in the end the debate resulted in millions of extra dollars for affordable housing, a notable outcome given the region's pressing crisis.

If our stadium tussle rankled the Seattle Times opinionators, perhaps they will have something to say about a political controversy embroiling hometown high-roller T-Mobile in D.C. On Wednesday, The Washington Post reported that John Legere, T-Mobile’s brash, tracksuit-wearing CEO, as well as a cadre of fellow executives, made repeated trips to the Trump International Hotel in Washington, beginning in April. Their first visit came the very day after T-Mobile announced a $26 billion merger with Sprint, a move that could increase the value of Legere’s company twice over — and some.

According to reporters Jonathan O’Connell and David A. Fahrenthold, who spoke to hotel employees and obtained a Trump Hotel “VIP Arrivals list,” Legere had made at least four visits to the hotel by mid-June, apparently strutting through the gilded lobby in magenta swag.

His purported rationale for choosing the Trump International? “It’s become a place I feel very comfortable,” he told the Post last week. “At the moment I am in town for some meetings at the Department of Justice. And it’s very convenient for that.” The DOJ is just one department in Donald Trump’s administration that needs to green light the merger.

T-Mobile executives spent at least 38 nights in the hotel, according to the paper. By the end of May, Legere was a member of the “Trump Card” privileges program, and the Post estimates that T-Mobile paid the Trump Organization “tens of thousands of dollars” for the accommodations.

The Post’s report comes as the Trump International Hotel in Washington, D.C., which opened in 2016, is facing heightened scrutiny. It is currently the subject of numerous ongoing lawsuits that suggest operations of the property, benefiting Trump and his business organization, violate anti-corruption laws. Just this week, the inspector general for the General Services Administration — the agency that leased the building to Trump — argued in a report that GSA lawyers ignored the issue of whether the presidential/private business arrangement is an affront to the Constitution’s emoluments clause.

Legere demurred when the Post asked whether he expected his company to earn special treatment by staying at the hotel. “Certainly not,” he said. “I don’t know why it would.” The next evening, Legere was tweeting from a Four Seasons hotel in Georgetown, where he was apparently staying. And Wednesday, the telecom CEO took to Twitter again, this time to defend himself and his company. “Wow — A lot of attention on where I choose to stay in DC,” he wrote. “I’ve said many times that I respect this process and am working to get our merger done the right way. I trust regulators will make their decision based on the benefits it will bring to the US, not based on hotel choices.”

When baseball starts this spring, signage and the new name of the Mariners park will continually extol T-Mobile. Perhaps this is unsurprising considering its financial clout and local roots. The telecom behemoth, which has grown 75 percent in the past half-decade, will contribute $87.5 million to the stadium over 25 years. Plus, the company has a long history in the region, beginning with Western Wireless, an Eastside company started by the Mariners’ billionaire chairman, John Stanton. But for many outside the Times’ editorial board, T-Mobile’s name, adorned across our ballpark, will serve as further evidence that our city is transforming into a playground for the wealthy, and provide yet another reminder of just how entwined our lives are with corporate power.

The damning reports from The Washington Post and the U.S. Office of Inspector General should leave baseball fans, sports-agnostic Seattleites and — one can hope — members of The Seattle Times editorial board with questions about the Trump International and its relationships to businesses and foreign governments. The decision by Legere and his executive entourage to frequent Trump's hotel as the company navigates a multibillion-dollar merger may not constitute quid pro quo corruption. But, like the hot pink glow that will soon spill onto the streets south of Seattle’s downtown corridor, it sure looks bad.