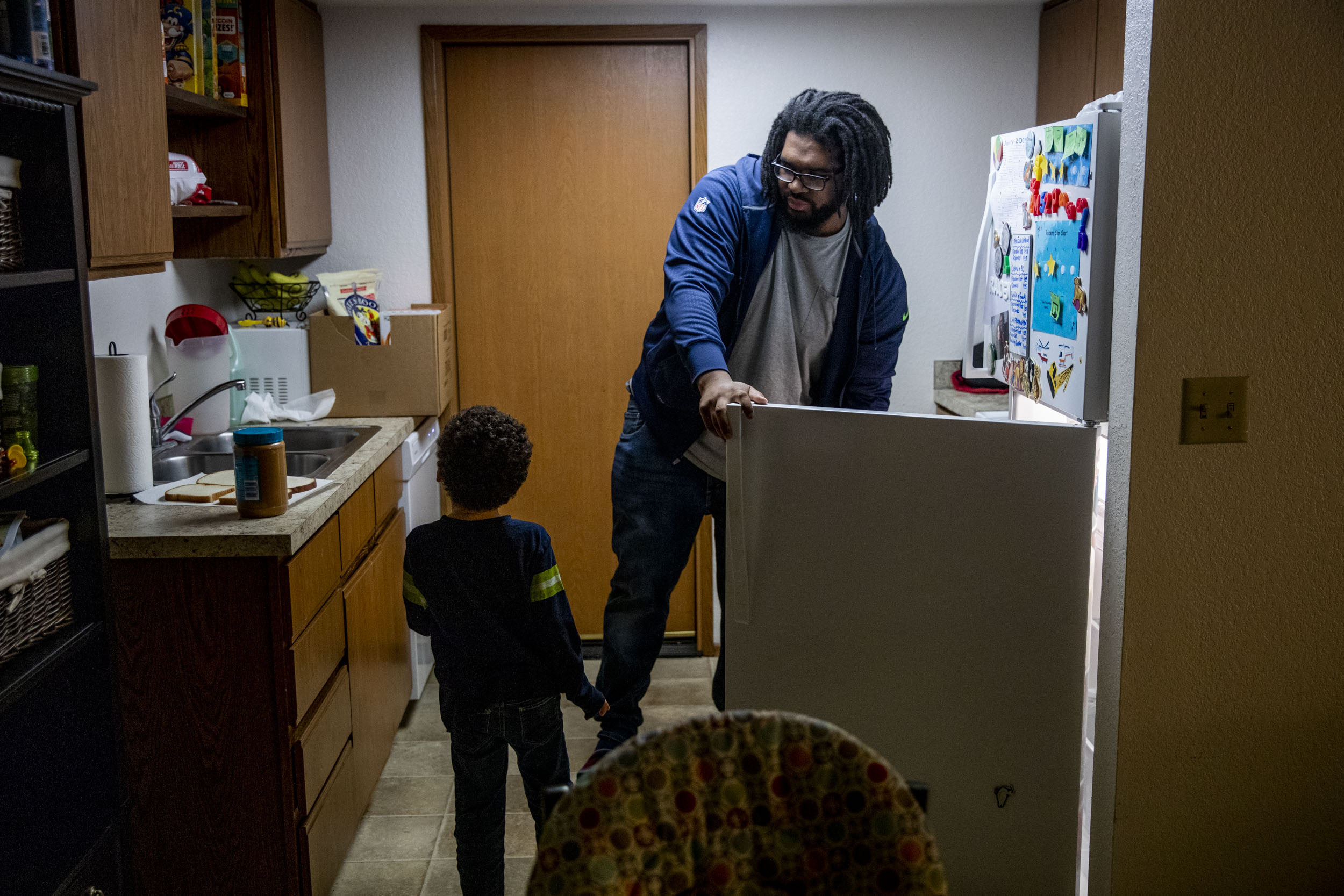 Roger Hasty II fixes dinner for his kids in his Lacey home on Wednesday, Jan. 23, 2019. Hasty is a federal correctional officer for the Federal Detention Center in SeaTac and is working without pay due to the government shutdown. Hasty's wife is a full-time student and also works part-time. On Friday, the Hasty family will have missed two paychecks. (Photo by Dorothy Edwards/Crosscut)

The approximately 100 federal prison employees working in SeaTac are only a small portion of the nearly 13,000 federal workers in Washington state affected by the government shutdown. But they worry the shutdown is not only causing them financial hardship, but putting their lives and the community in danger, as they struggle to continue to manage prisoners.

“If you’re going to talk about border security, we are your security here. We’re keeping inmates in. We’re keeping them safe, but keeping them locked up,” said Angie Tucker, a 44-year-old corrections officer at SeaTac’s Federal Detention Center and the legislative coordinator with Local 1102, part of the American Federation of Government Employees. The federation is the largest federal employee union, which recently sued the Trump administration over the lack of pay throughout the 34 days of the shutdown.

“Obviously being short-staffed does create more of a risk,” said Art Alanizinb, president of Local 1102. “There’s an extra layer of vigilance because you really have to be careful so something doesn’t escalate because we don’t have the staff to respond.”

Nationally, assaults on prison staff at the 122 Federal Bureau of Prison facilities rose more than 8 percent in 2017 from the previous year. Only a month ago, a female inmate at the SeaTac detention center jumped one of the female officers. Another corrections officer rushed to help. The inmate was eventually transferred to a different facility, Alanizinb said.

Employees say the shutdown is only exacerbating the problems. Hiring, for example, is now at a standstill.

The starting salary for a SeaTac prison security guard is close to $40,000, Alanizinb said. But after more than a month without pay, some officers have become financially desperate and have started to rethink their careers. Employees say some corrections officers are either already applying to other jobs or thinking about retiring early.

“I know our employees are really feeling the pinch,” Alanizinb said. “We’re doing what we can to make sure they have enough gas to get back and forth from work.”

“You’re asking people to risk their lives when they can go down the street and work for McDonald’s,” Tucker added.

In a statement, the Federal Bureau of Prisons said "employees will be paid for work performed after Congress passes and the President signs a new appropriation...Of the total number of BOP staff on board (36,361), 35,287 - or approximately 97 percent are excepted" to continue to report to work during the shutdown. The bureau would not respond to any other questions about the SeaTac facility and how the shutdown has impacted it.

Tucker, a mother of two who lives in Renton, said she and others are having to work 16-hour days just to cover all the shifts at the facility. Some 800 inmates are housed at the detention center on a range of offenses from immigration charges to more serious crimes.

“We just really need our story heard,” Tucker said recently at a press conference with U.S. Rep. Pramila Jayapal, D-Seattle, an outspoken critic of the shutdown.

“We need something to happen. I mean where you at Mitch? We’re getting angry,” Tucker said, referring to U.S. Senate Majority Leader Mitch McConnell.

On Thursday, McConnell introduced a bill intended to end the fight over the $5.7 billion border wall and the government shutdown. It resembled an offer President Trump made over the weekend — trading temporary protections for DACA recipients, undocumented immigrants brought to the U.S. illegally as children, for wall funding. The bill also offered protections for about 325,000 immigrants with Temporary Protected Status. The bill ultimately failed in the Senate.

Tucker, who has been with the Federal Bureau of Prisons for 15 years, earns approximately $61,000 a year. She said as a recent breast cancer survivor, she also worries about other benefits that aren’t being covered during the shutdown, such as sick leave or health premiums. 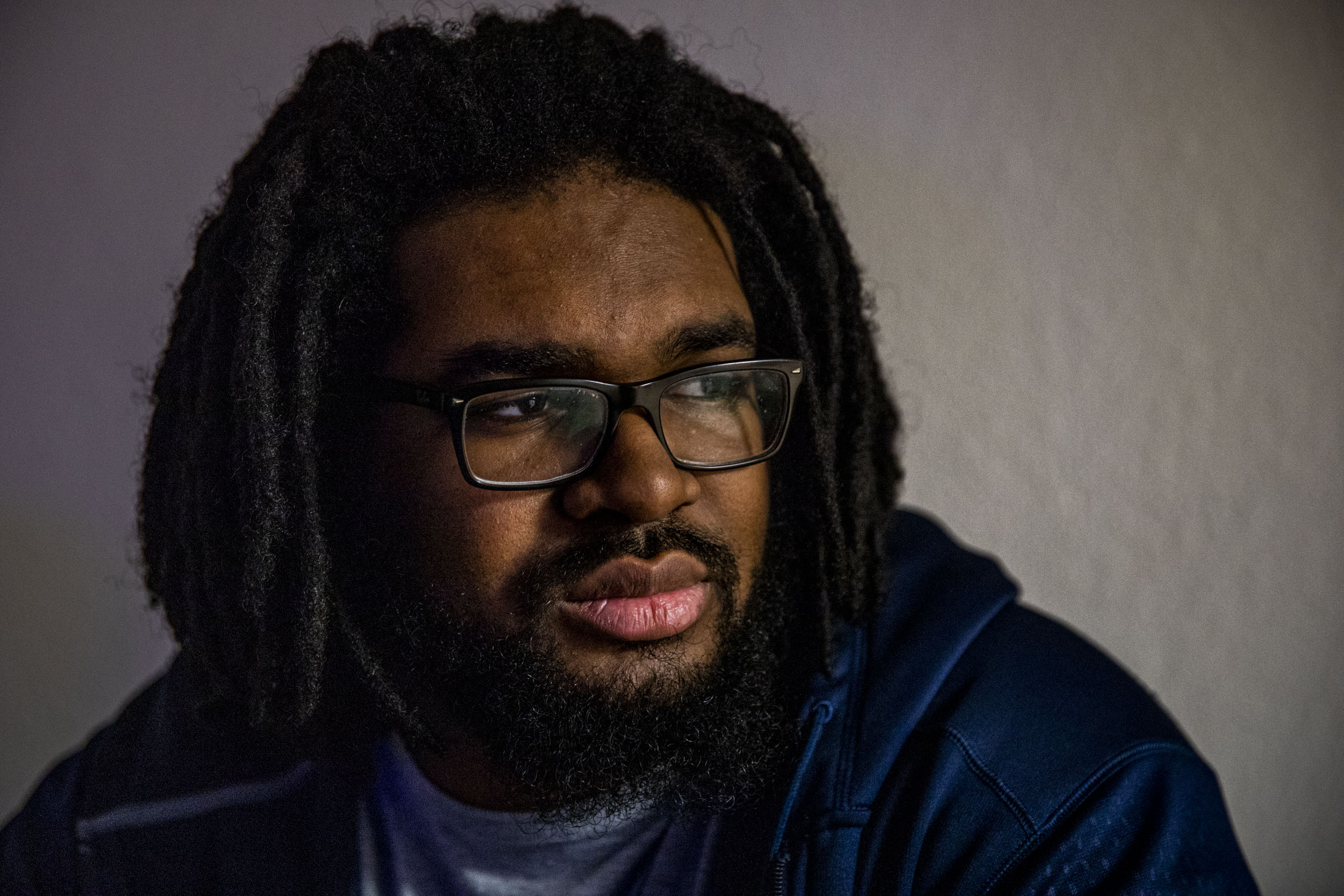 Roger Hasty II in his Lacey home on Wednesday, Jan. 23, 2019. Hasty is a federal correctional officer for the Federal Detention Center in Seatac and is working without pay due to the government shutdown. Hasty's wife is a full-time student and also works part-time. They have two young children. On Friday, Hasty will have missed two paychecks. (Photo by Dorothy Edwards/Crosscut)

Roger Hasty II in his Lacey home on Wednesday, Jan. 23, 2019. Hasty is a federal correctional officer for the Federal Detention Center in Seatac and is working without pay due to the government shutdown. Hasty's wife is a full-time student and also works part-time. They have two young children. On Friday, Hasty will have missed two paychecks. (Photo by Dorothy Edwards/Crosscut)

Adam Cunningham has been working at the SeaTac facility since 2014. Cunningham, a 44-year-old married father of two, continues to receive a small sum from the government because he is a disabled veteran.

Still, Cunningham said his family has already racked up approximately $1,000 in credit card debt due to the shutdown. He’s also had to use some of the disability money his autistic son receives.

Yet Cunningham, who supports President Trump, continues to commute more than 100 miles to and from work.

“I voted for Trump. I support him,”  Cunningham said. “But right now I don’t support any of them.”

“They need to put their egos aside and do what’s best for the country,” Cunningham said, referring to ending the shutdown.

“It just tells us how little they care about us both as Americans and law enforcement,” he said, referring to politicians on both sides of the aisle.  “They’re doing this on the backs of the working men and women who put them there in the first place and that’s just wrong.”

Roger Hasty II, 29, said he keeps returning to work because he’s made a commitment to his co-workers and himself.

“I kinda really don’t have a choice. It’s a career for me,” Hasty said. “I’m already vested in the agency.”

Hasty’s wife works only part time because she’s a full-time student. He said he is resentful that  “our paychecks are being taken hostage,” while other families impacted by the shutdown face eviction and other calamities.

The inmates are no better off, Hasty pointed out, because their lives have also been put on hold, unable to proceed with immigration hearings because courts aren’t up and running, and administrators can’t process paperwork that could get detainees released to a halfway house.

William Meyer, a 49-year-old supervisor at the SeaTac detention center who has worked for the Bureau of Prisons for almost 20 years, said employees are attempting to stick together and cheer each other up with small gestures, such as bringing in a box of doughnuts. Others also have tried to help. His wife usually works part-time but was offered additional hours at work.

Although he’s tried to keep a positive outlook, Meyer said he can’t help but be disappointed in the country’s state of affairs.

“A society is judged by how we treat our poor and imprisoned. Not how we treat the rich and wealthy,” he said.