Boasting $19.6M in arts revenue, Edmonds could serve as a model for the state. 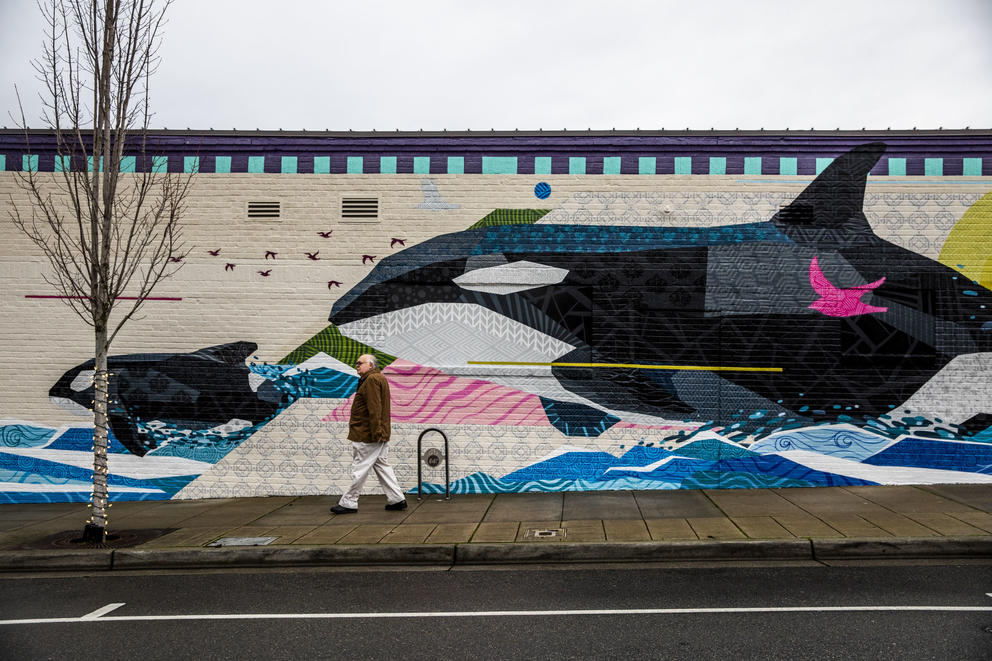 A pedestrian passes by a mural in downtown Edmonds on Wednesday, Jan. 9, 2019. (Photo by Dorothy Edwards/Crosscut)

Announced by Gov. Jay Inslee in November, Edmonds is the first to benefit from 2017 legislation aimed at collecting data on how the arts stimulate economic growth. The legislation provides official highway signage and $5,000 to each designated creative district. It also funds a new position: a creative districts program manager at the state’s art agency, ArtsWA.

“As soon as we learned about it as a bill we started supporting it,” said Patrick Doherty, Edmond’s economic development director. He added that Edmonds will use the award money to pay for advertising and creative district rebranding to attract more visitors as well as more businesses.

As part of its application, Edmonds' own economic impact study showed the arts and culture sector — 103 arts and culture-related entities, organizations and businesses — generated an estimated revenue of $19.6 million in revenue to the local economy, generated 440 full-time jobs and $17 million in labor income. It also found the sector contributes to residents’ quality of life by “providing a positive community identity in the region.”

“They had already done a lot of this planning work. It was baked into how they do business," said the state’s new program manager Annette Roth. “I think that’s part of the reason they were able to get their application in so quickly.”

The National Endowment for the Arts (NEA), the U.S. Bureau of Economic Analysis and organizations like King County’s ArtsFund have also published studies measuring the benefits and impact of art in communities.

State-by-state data released jointly by the NEA and the U.S. Bureau of Economic Analysis estimated arts had a 7.9 percent share of Washington’s economy, cashing in at $35.6 billion. That same report found that Washington’s economy was the second state with the most percentage in value added through the arts, followed by New York and California and beat only by Washington D.C., at 8.4 percent.

But according to the Edmonds' economic arts study, Washington state’s Legislature only invests $0.23 per capita to state art agencies, which is less than half of what Oregon, Idaho, Montana, or California invests per capita. The state ranks 45th in per capita arts appropriation, the study shows.

“One of the things that is challenging for artists in particular is as communities sort of become cool and up and coming they get priced out,” she said, “And the people who made their communities and the area cool aren’t there anymore and that sort of energy they bring is lost.”

In downtown Edmonds, within a short walk from Main Street, sits a retro movie theater, the Cascadia Art Museum and restaurants offering a wide palette of cuisines to suit any taste.

“People come for the day because they want to go to the beach or they want to just take a walk through a traditional downtown,” said Doherty. “They’re tired of the nameless, faceless, suburban kind of existence — walking through a mall listening to muzak and smelling popcorn. They want to come to something that is real, genuine,” he said.

Doherty said growing the arts and culture sector will mean new “unrecognizable faces and perhaps more cars and some development.” But that’s the beauty of being a welcoming and creative city.

According to ArtsWA, there are now 25 municipalities interested in the creative district program and four actively working to submit their application in the following months, including Chewelah, a little-known valley town in the shadow of Mount Quartzite that’s home to a couple thousand people and is 40 miles north of Spokane.

“The process has been quite wonderful,” said Barney Brockwell, a member of the Chewelah Arts Guild. “It’s gotten people in the community together that might not otherwise have connected.”

The small town has approximately 90 different events throughout the year including a traditional skills retreat that teaches blacksmithing and wood carving.

The group of community leaders is aiming to turn its application in by the end of April.