For WA's 'razor clam guy,' digging is a family affair

Fish and Wildlife's Dan Ayres' grandfather survived the Great Depression by hunting for razor clams. Now the biologist is making sure future generations get to hunt for the Pacific Northwest's favorite shellfish. 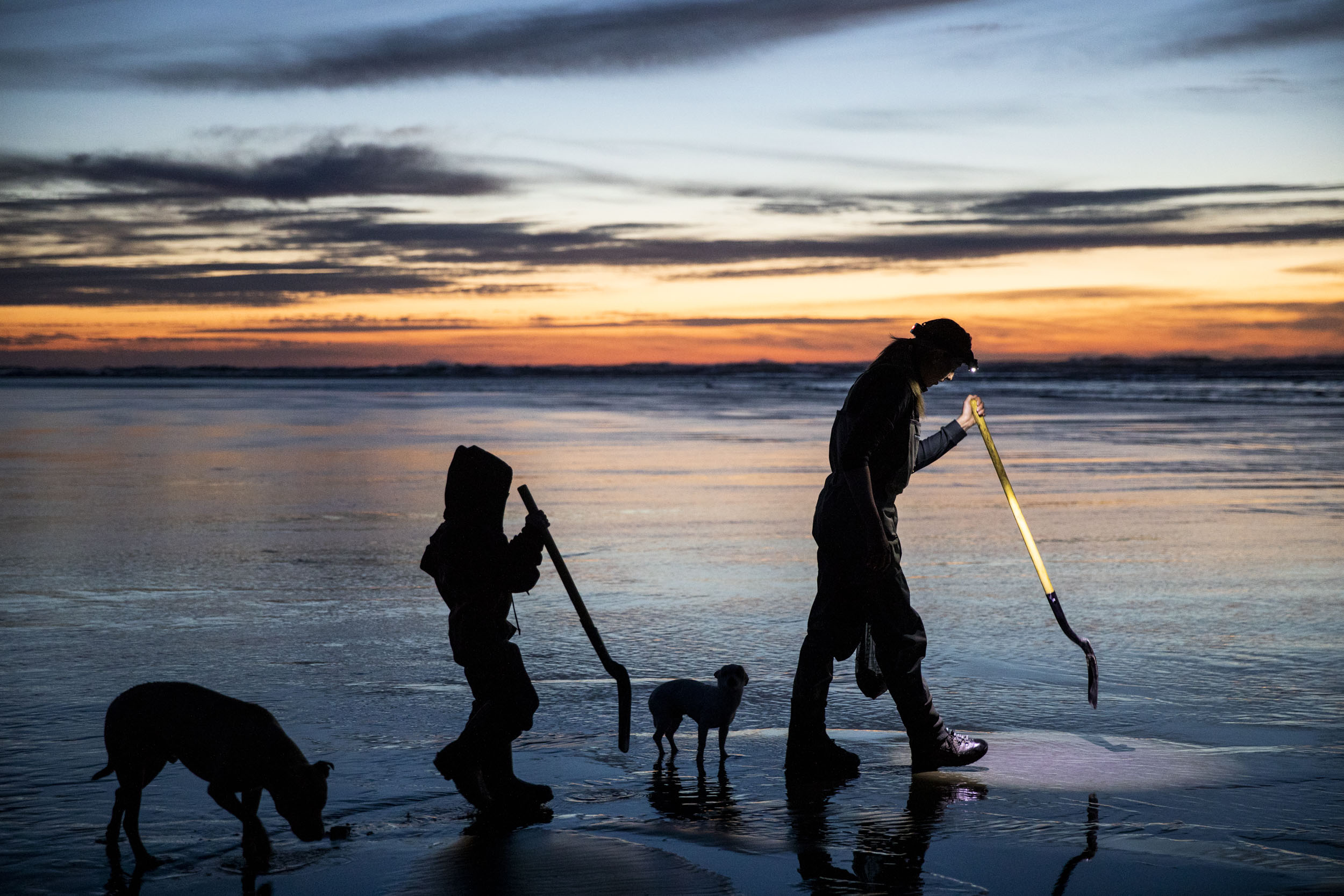 With the hood of his red Montesano Bulldogs sweatshirt flapping behind him, Dan Ayres stomps around in circles on the wet sand in his rubber, thigh-high wader boots.

“See what I’m doing, dear?” he yells over the misty wind to his wife, Gail. “I’m stomping them up. They are here; they just need a little help.”

He is looking for a single raisin-sized dimple in the sand along this 7-mile stretch of beach near Grayland. This tells him where to dig for the prize he and 1,400 other hunters are all seeking on this cold, wet afternoon: Siliqua patula, the Pacific razor clam.

He spots one, rolls up his right sleeve and digs a small hole next to the dimple with his late father’s old clamming shovel. He reaches down into the 6 inch-deep cavity and within a few moments pulls out a wiggling razor clam. A greenish-brown oval shell about 3 inches long hides the body of the clam, while a cream-colored foot sticks out one end and a trunklike siphon extends from the other. It's not the most attractive mollusk, but clamdiggers aren't after its looks: They're after its surprisingly buttery, firm flesh when cooked. 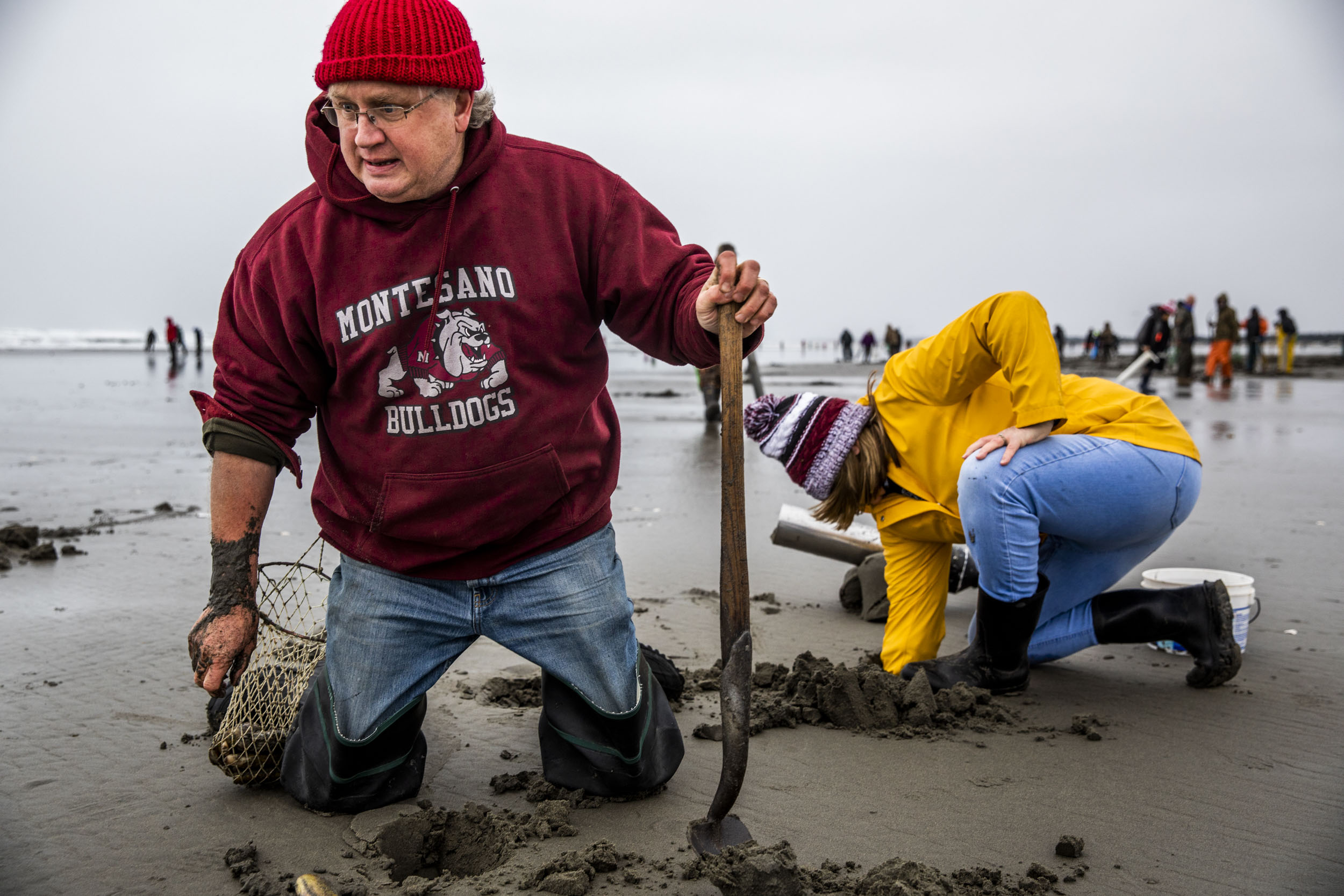 Dan Ayres, coastal shellfish manager with the Washington Department of Fish and Wildlife, and his wife, Gail, of Montesano, dig for razor clams at Grayland Beach State Park in Grayland, Wash. on Jan. 2, 2019. Ayres grew up going to the coast for razor-clam digs and has been with the Fish and Wildlife Department for 38 years.

Dan Ayres, coastal shellfish manager with the Washington Department of Fish and Wildlife, and his wife, Gail, of Montesano, dig for razor clams at Grayland Beach State Park in Grayland, Wash. on Jan. 2, 2019. Ayres grew up going to the coast for razor-clam digs and has been with the Fish and Wildlife Department for 38 years.

Even in a state where many families have lengthy clamming traditions, Ayres’ obsession runs deeper than most. (He even proposed to his wife by hiding a ring inside a razor-clam shell.) While growing up in Aberdeen, he remembers his parents waking him up early in the morning for the day’s razor-clam dig.

His mother would pack tuna sandwiches and hot chocolate that he would eat with his father and two siblings on the hood of his father’s 1955 Chevy truck parked on the beach — after they finished their catch.

Ayres, 63, still thinks of tuna sandwiches and hot chocolate when he’s working with razor clams, which is now almost every day during the season. He turned his childhood love of the sea into a 38-year career with the Washington Department of Fish and Wildlife, first as a bottomfish biologist and as coastal shellfish manager since 2000.

“I have firsthand experience of that fire people have in their gut for getting out and digging razor clams,” he says.

That fire is shared by roughly 250,000 to 400,000 other razor-clam diggers who visit the Pacific Coast every year. That’s almost four times more than Puget Sound hardshell clam fishery, the next biggest recreational shellfish fishery in Washington. From October to May, between 3 million and 6 million razor clams are harvested each season. The Fish and Wildlife Department tries to offer at least one week of digging each month during the season, but it all depends on the health of the state’s clam population.

That’s where Ayres comes in. Parts of his job include analyzing health and assessing razor-clam population size, setting dates for public digs and keeping track of how many razor clams are harvested each year. Outreach is part of it, too: He made a popular instructional video with a colleague about how to dig for razor clams. Ayres says it’s important for him to keep razor-clam digging accessible to everyone.

“It is a terribly gratifying feeling every time I see someone want to try for the first time,” Ayres says.

Ayres said being out working on the beach during digs is his favorite part of the job. Some folks recognize him as the “clam guy” and stop him to ask questions or tell him about their own experiences digging. One family who saw him on the beach during a public dig told him they found his instructional video online and came to dig for the first time because of it.

Most of the clam diggers Ayres encounters are families out for a bit of seaside fun. But he knows from experience that, for some, razor clams are a method for supplementary nutrition — even survival.

To get through the Great Depression, Ayres’ grandfather would dig for razor clams with his buddies and then trade those clams for beef, eggs or milk. He passed on those lessons of Depression-era resilience to his son: Ayres’ father, Lawrence, was a machinist for a pulp and paper company who weathered several worker strikes without pay. To get the family through the lean times, Ayres' mother, Patty, would make clam spaghetti or clam loaves with canned clams she preserved from previous digs.

Ayres' parents were so dedicated to clamming they continued going until their bodies gave out. His father, who died in 2011 from a neuromuscular disorder called progressive supranuclear palsy, fell over on the beach during a dig in 2009. Ayres said his mother decided at that point that her husband was done razor-clam digging. She continued to go out to the coast for digs while his father would watch from the car.

His mother learned she had pancreatic cancer about the same time his father stopped digging, but that didn’t stop her. She continued going to the coast to dig during chemotherapy, though Ayres said that towards the end she needed some help digging up her clams. She died in 2012. 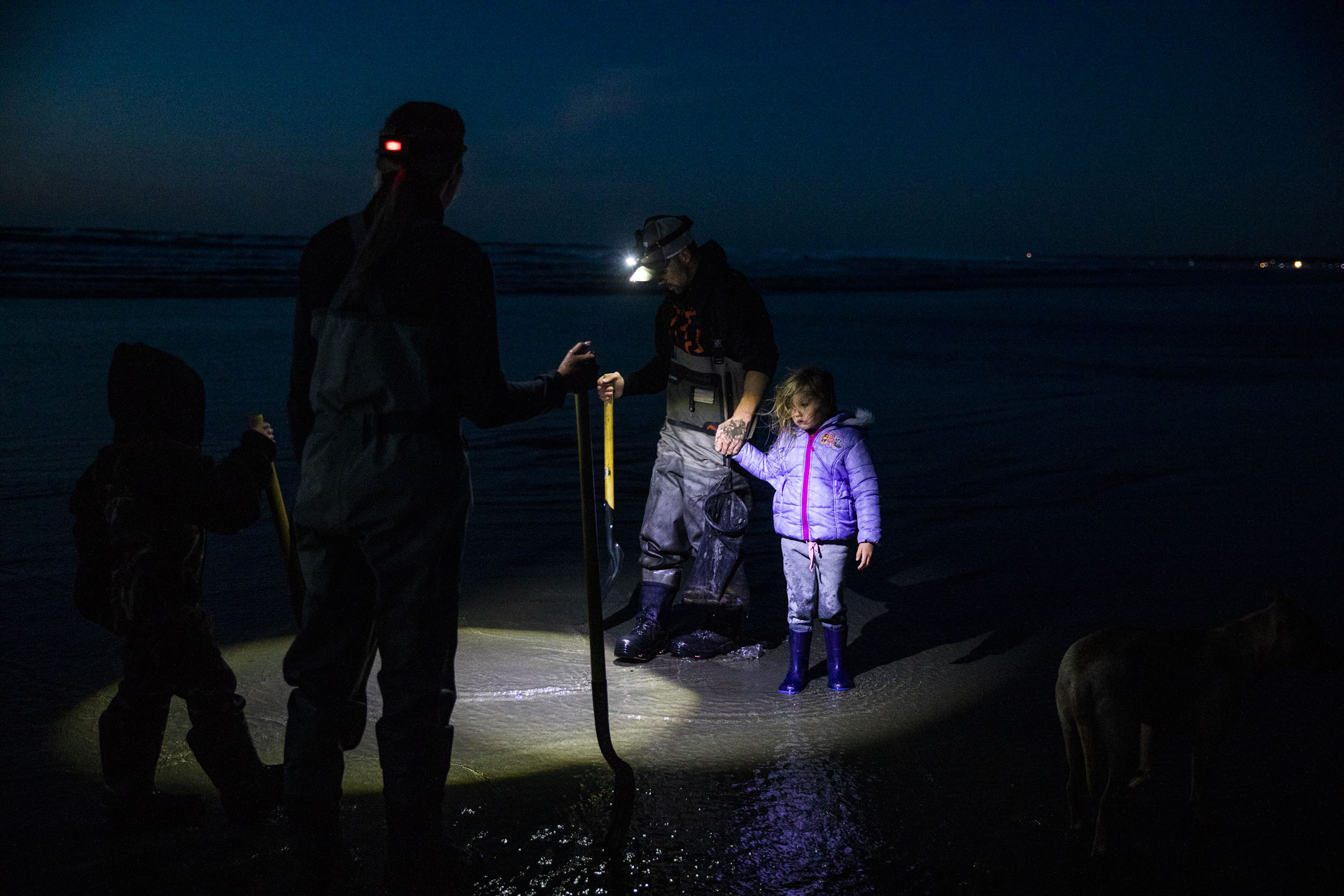 Keith Johnson of Aberdeen holds his daughter Ayva's hand during a razor-clam dig at Twin Harbors Beach State Park in Westport, Wash. on Dec. 6, 2018. Johnson grew up coming to the Washington coast for razor-clam digs. (Photo by Dorothy Edwards/Crosscut)

Keith Johnson of Aberdeen holds his daughter Ayva's hand during a razor-clam dig at Twin Harbors Beach State Park in Westport, Wash. on Dec. 6, 2018. Johnson grew up coming to the Washington coast for razor-clam digs. (Photo by Dorothy Edwards/Crosscut)

Ayres notes that his family history with razor-clam digging isn’t unlike other families in the area. But as families get busier and those generations die off, Ayres worries those stories will die with them.

“I don’t think my girls, when they are 60, will tell the same stories I tell,” Ayres says.

Ayres takes his two daughters, 16 and 19, out to the beach to dig when they can, but it doesn’t happen as often as he’d like. Because razor clams are a part of his job, it is a little easier to keep the shellfish a part of his daughters’ lives.

Like with fishing or hunting, the first step to installing the clamming tradition in the next generation is sharing the secrets of a successful catch. There are two ways to dig up a razor clam: with a shovel or a clam gun, which is essentially a metal tube with handles used to suck up a column of sand containing the clam. According to Ayres, teaching someone to dig with a shovel is a lot more work: For most people, success comes more quickly with a clam gun. But in many circles, using a clam gun is akin to cheating.

When he was a kid, Ayres says there wasn’t a clam gun in the house. His father told him, “You’re a man, you got to use a shovel.”

Ayres said he will always remember the day he saw his father digging with a clam gun for the first time. His father saw Ayres coming down the beach and he tried to hide the 2-foot-plus clam gun behind his back. When Ayres asked what was behind his back, his father explained with shame that he just couldn’t bend down like he used to. But Ayres was just happy to see him still out on the beach digging.

“It’s about getting out there and getting your clams,” Ayres says. “I didn’t care how he was digging.” 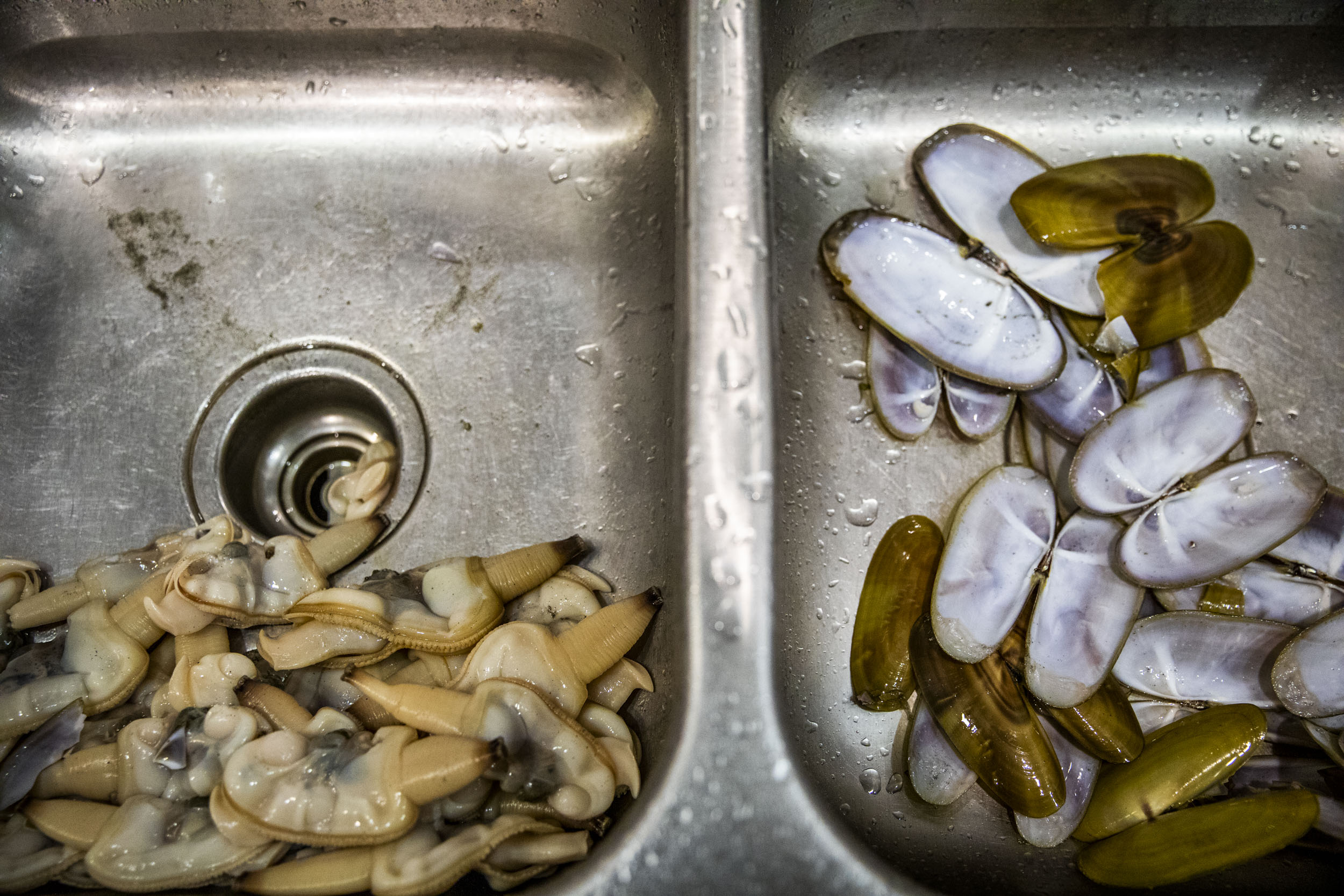 Fresh razor clams before being cleaned in Dan Ayres' kitchen sink on Jan. 2, 2019. Ayres grew up razor-clam digging on the Washington coast and says his father was always good at teaching him and his siblings to clean their clams right away.

Fresh razor clams before being cleaned in Dan Ayres' kitchen sink on Jan. 2, 2019. Ayres grew up razor-clam digging on the Washington coast and says his father was always good at teaching him and his siblings to clean their clams right away.

After about an hour, Ayres and his wife have filled their sacks with razor clams — Ayres with 15 and Gail with 9. They load their sandy shovel and gun into the back of their white pickup truck and head home to pan-fry the day’s catch with a pinch of garlic salt — Ayres’ favorite way to eat them.

A line of cars packs the two-lane road leaving the beach, a rare traffic jam in the small coastal town of Grayland. From here diggers will disperse to different homes to cook their catch fresh, like Ayres, or possibly can it for later. The recipes might differ, and a few might be going home with fewer clams than they wanted. But for a few final moments, vets and newbies alike are still connected by their shared pursuit of the Pacific razor clam.

“The people you see on a crazy day like today, they are all here for the fun of it,” Ayres says. “They are here ’cause they just taste good.” 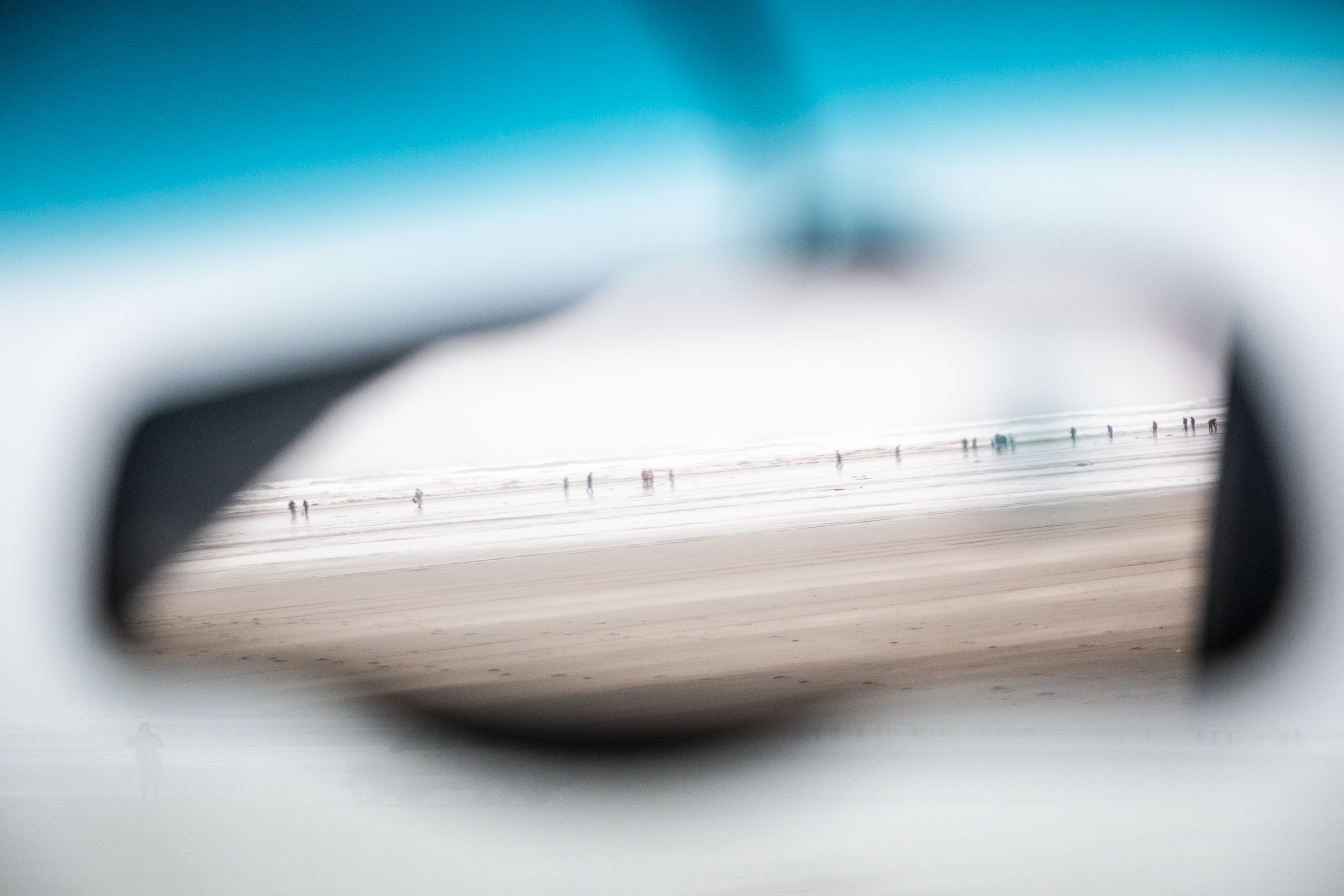 Razor-clam diggers dig along the coast at Grayland Beach State Park on Jan. 2, 2019.

Razor-clam diggers dig along the coast at Grayland Beach State Park on Jan. 2, 2019.