Reading the tea leaves in the beverage choices of the former Starbucks CEO. 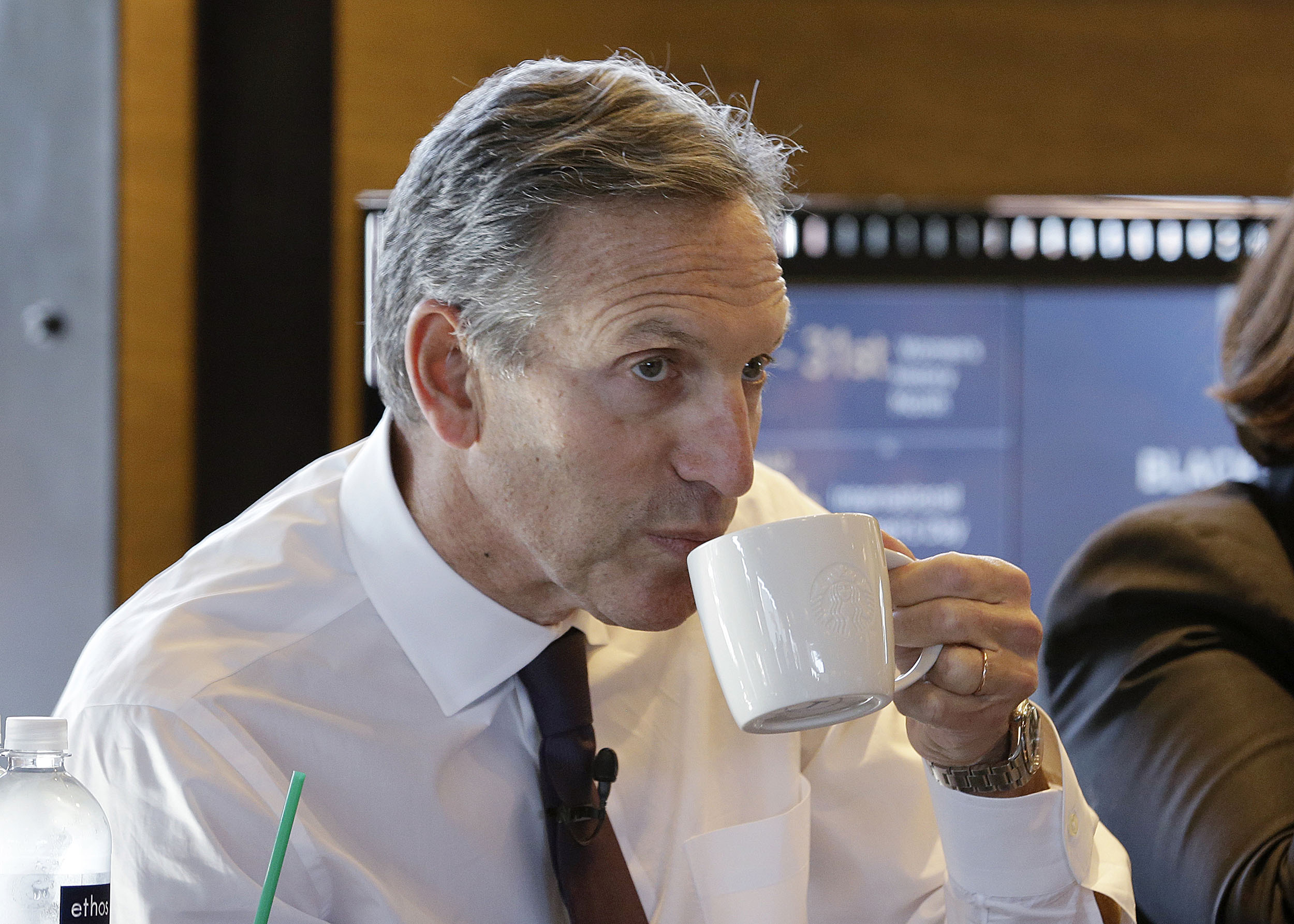 In this 2015 file photograph, Starbucks' Howard Schultz sips coffee at a store in Seattle during a community event with local law enforcement and community leaders. (Photo by Elaine Thompson/AP)

Howard Schultz’s favorite coffee is called Aged Sumatra. For fans of darker coffees, this is a fine choice: It’s full-bodied with earthy tones, roasted in small batches and, yes, aged in burlap sacks somewhere in Southeast Asia. Schultz prefers it black, brewed in a French press. I once loaded half a dozen bags of it into a sack for his assistant.

But several years ago, in 2016, when I was working at a North Capitol Hill Starbucks in the brisk heart of fall, Schultz ambled in and ordered something different. The drink was not unheard of — no drink is unheard of to a Starbucks barista — but it was a departure from his usual. He asked for a double short nonfat cappuccino, two-thirds full; for nonbaristas, that’s two shots of espresso with 5.3 ounces of steamed nonfat milk (mostly foam) in an eight-ounce cup.

“Nice choice,” I lied, extending my hand to meet the man who then still led the company that provided me with health care in exchange for minimum-wage, part-time work. He asked my name.

As far as coffee goes, the two drinks have little in common. One is a rare, top-shelf product that can sell for upwards of $30 a bag; the other is a fussy variation on an Italian classic designed to stump new baristas. But both share an air of respectability. The Aged Sumatra is a solid coffee, but the cappuccino yearns for something it can't possibly be. In the hands of Starbucks, the shorter than short cappuccino achieves nothing more than a faux respectability. 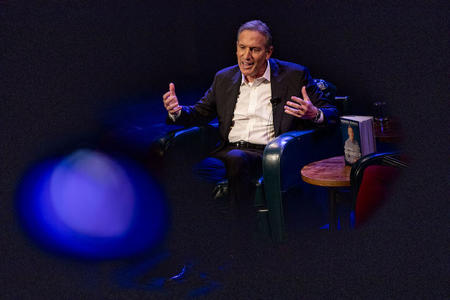 During the Seattle stop of Schultz's book tour, there was a little farce and some magical thinking in his appearance.

For Schultz, his choice to sell America faux respectability is nearing its maximum expression. Last Sunday, while ostensibly promoting a new memoir and national book tour on 60 Minutes, he also announced his intention to explore an independent candidacy for president of the United States. Broad swaths of the American political left reacted by choking on their Pike Place Roast, astounded by what they perceived to be the arrogance of another stratospherically wealthy capitalist willing to risk further damage to our already-fragile republic. Princeton history professor Kevin M. Kruse captured the angst that night, tweeting: “I’m an American political historian,” Kruse wrote, “and I can assure you that the only thing you’ll accomplish by running for president as a centrist independent is helping re-elect Donald Trump.”

In the short time since that announcement, Schultz has faced the cold water of near-constant backlash, kept alive by food-related blunders like failing to correctly guess the price of a box of Cheerios. Lots of oxygen will be devoted to parsing the shallowness of his policy ideas, or mapping the demographic upheaval should he commit to running. But I keep returning to my moment of overlap with Schultz, trying to read the tea leaves in his caffeine choices and looking for the reasons that led a fairly run-of-the-mill billionaire to believe he can run the free world because he can also sell mediocre coffee.

This is all part of a rich tradition of attempting to mine insight from the thought processes of quixotic (Schultz) and fraudulent (Trump) billionaires by watching what they put in their mouths. By now, much has been made of Trump’s bizarre and childlike eating and drinking habits. During the campaign, he regularly ordered a meal of two Big Macs, two Filet-o-Fishes and a chocolate milkshake. He reportedly drinks a dozen Diet Cokes a day and avoids eating with his hands. His favorite dish is the meatloaf from Mar-a-Lago, a recipe apparently borrowed from his mother. And perhaps most offensively, the American commander-in-chief douses his steaks, cooked very well done, in ketchup.

The writer Helen Rosner has parsed the significance of these eccentric ways. She proposed in 2017 that Trump’s eating habits “speak to a gastronomic risk aversion — a fundamental lack of trust — across the board.”

“Donald Trump is not a man who likes to try new things, and that says a lot about him,” she wrote. The president’s position on fully-cooked steaks inspired the most ire from Rosner. She argued that the “collective wisdom of thousands of years of gastronomy” have established that a pink center is unambiguously better. She went on, “It may just be steak, but it’s also everything: It’s a choice to silence experts who suggest a different path, to dismiss their course corrections, to reject the very premise that expertise outside his person can have value. A person who won’t eat his steak at any doneness but well is a person who won’t entertain the notion that there could be a better way; a person who blankets the whole thing in ketchup ... is always going to fix his problems by making them worse. A person who refuses to try something better is a person who will never make things good.”

Breakfast-cereal gaffes aside, Schultz likely has more respectable tastes than Trump. Certainly he is a more successful businessman and almost certainly a better person. (Schultz’s humble beginnings in New York government housing, while not a precursor of human decency, seemed to have informed his decision to build a mission-driven company his blue-collar father “never had a chance to work for.”) But his beverage choices go beyond personal ones: They are bound into the fabric of his business, where we might learn how Schultz would govern if he ran the country like a Starbucks.

Here it must be said that the tremendous success of Starbucks belies the fact that it is selling an unexceptional product. Any coffee snob knows Starbucks’ traditional espresso is bitter, burnt and bad in ways that a few generous dollops of steamed nonfat-milk foam can never remedy. The sausage and cheddar breakfast sandwich is 5 percent better than a Sausage McMuffin with Egg and 14 percent more expensive. The rest of the menu is decent at best, and the experience in most stores ranges from generic to oppressively sterile.

On the plus side, Starbucks baristas are extraordinarily accommodating, and I have seen many display deeply moving acts of kindness (no matter the cruelty or irrationality of a cranky customer, my old manager maintained a preternatural warmheartedness). But in my tour of service at my home-base store and covering shifts at several others, I also regularly encountered fundamentalists preaching the gospel of Starbucks standards, quick to denounce an unassuming customer or critique a fellow co-worker for deviating from standard operating procedures. It was a mix of selfless servants and obnoxious true believers. In this respect, at least, the Schultz administration might function much like any other.

It is true that Starbucks deserves some of its success. And despite occasional missteps, the company has acknowledged many of its mistakes and taken laudable social stances — supporting veterans and refugees, providing economic opportunity in underserved neighborhoods, subsidizing college education — backed by significant material investments. But it also had baristas make a Unicorn Frappuccino, a blended milk-and-ice crime against nature topped with whipped cream and sweetened with a creamy syrup, mango syrup, and pink and sour blue powders. This 410-calorie abomination ranks only slightly higher than the 2015 decision to encourage employees to discuss race with customers in the aftermath of police killings of Michael Brown and Eric Garner. I’m all for conversation, but I had a hard time imagining customers and baristas wanting to discourse on our nation’s deepest cultural wounds to a backdrop of a shrieking steam wand.

Even scarier episodes originate from the less friendly corners of America’s third place. In 2014, a Starbucks employee in Milwaukee called the police on a black man named Dontre Hamilton who was sleeping in a public park, outside a temporary Starbucks kiosk. A police officer summoned to the scene ended up confronting Hamilton, who suffered from mental illness. After a physical tussle in which the officer hit Hamilton, he seized the officer’s baton and struck him back, according to a report from the Milwaukee County district attorney’s office. The officer then shot Hamilton 14 times, killing him. The incident sparked months of protest, but there was never a public acknowledgment from Starbucks; certainly there was no decision to shut down stores across the country for four hours of training on implicit bias, as there was last year after a similar, though less disastrous, episode in Philadelphia. The Hamilton family met with Schultz in 2015. The encounter, they said, left a bad taste in their mouths.

This is not to blame Schultz or Starbucks for our thorniest social ills. But when capitalists believe they alone can remake the country based on their towering business acumen, every aspect of that legacy deserves a close look. And even though Schultz has repented for some of these foolish errors, he appears to harbor more shame for his decision to sell a professional basketball team. “Selling the Sonics is the biggest regret of my professional life,” he wrote Thursday in a Seattle Times op-ed piece.

But as the entire country now knows, our only hard evidence of how a former CEO might run a country suggests that capricious whims will be just as, if not more, important than any political philosophy. Here, despite all the daylight between them, Schultz and Trump might not be so far apart. When I asked my former barista colleagues whether I remembered his order correctly, I got differing answers. One suggested I had it right, but it might have been a split-shot — i.e., half-caf — double short nonfat cappuccino, two-thirds full. Another insisted that Schultz’s go-to drink is a triple short Americano, two-thirds full. But when I pushed back, she speculated with something that might say more about the moral opacity of the politically naive billionaire than any dimly remembered drink choice.

“I think he may switch it up to test people.”

During the Seattle stop of Schultz's book tour, there was a little farce and some magical thinking in his appearance.