What the Seattle General Strike can teach workers today 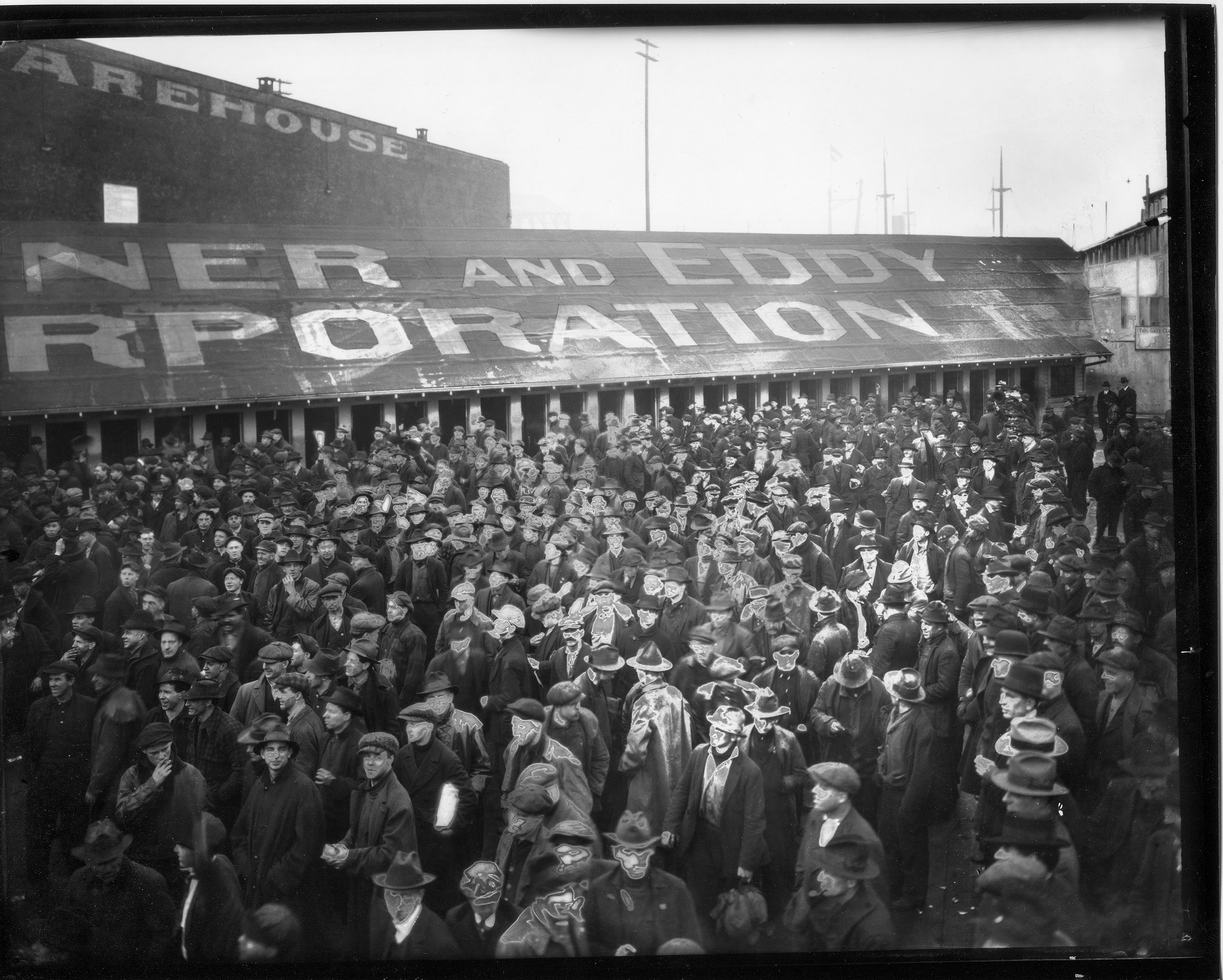 A population surging. An economy booming to the benefit of some much more than of others. A cost of living rising faster than the average wage. Although Seattle of 1919 was an almost unimaginably different place than the Seattle of today, the two cities share some arresting similarities.

As the 100th anniversary of the Seattle General Strike draws near at a time when present-day activists, advocates, everyday workers and civic leaders struggle to create a more habitable city, it may be worth looking to our past as we try to imagine a more hopeful future.

The early 1900s were a period of massive transition for Seattle. The Klondike Gold Rush and a subsequent shipbuilding boom nearly quadrupled the city’s population from about 80,000 in 1900 to more than 300,000 by 1920. Many of the new arrivals were laborers who came to Seattle during World War I to produce merchant vessels for the United States government. As the city grew more crowded, the cost of living, particularly for housing, soared, sowing discontent in the union halls and on the workplace floors.

Seattle was a strong union town back then. In 1919, about half of local workers belonged to unions, a level of organizational density of which today’s labor advocates can only dream. Most unions, following the American Federation of Labor model popular at the time, were organized by craft — so typographers belonged to typographers’ unions, retail clerks to retail clerks’ unions, waitresses to waitresses’ unions, and so on. Those unions, in turn, were members of the Seattle Central Labor Council (SCLC), which served as an organizing body for about 110 individual unions that represented, collectively, more than 60,000 workers.

The combination of union density, internal coordination and discipline, and political radicalism set the stage for one of the most significant labor strikes in American history: the Seattle General Strike, which commenced on Feb. 6, 1919, shuttering the city for almost a week. After the federal government, which had contracted with local shipbuilding companies during the war, refused to take action that would raise wages in the shipyards, more than 35,000 workers walked out in protest. The remaining membership of the SCLC then elected to strike in solidarity — carpenters, newsboys, barbers, restaurant workers and more.

While essential services, like the distribution of food and medicine, were permitted to continue, an estimated 65,000 workers stayed home or occupied their local union halls. The SCLC appointed a 15-member Strike Committee to assume the role of city governance. Unarmed “labor guard” members patrolled the streets to maintain order, but there was little need. As striker Earl George, one of the few Black union members at the time, famously said years later, the city was so quiet that “nothing moved but the tide.” (Most Seattle unions at that time were racially discriminatory, according to historian and University of Washington professor James Gregory, writing in his introduction to the reissue of Robert L. Friedheim’s 1964 book The Seattle General Strike. Only one, the International Longshoreman’s Association, allowed any Black members at all. Additionally, Japanese worker organizations were prohibited from membership in the SCLC, although many elected to join the strike in solidarity.)

What did the workers want? It depended on whom one asked. A contingent of radicals, comprising mainly members of the Industrial Workers of the World (known as the Wobblies), wanted to end the system of capitalistic exploitation altogether; the strike, they believed, was the first step toward socialist revolution. Others who were more moderate wanted workers to have greater control over industry. Still others simply wanted to see the shipyard workers (and perhaps themselves) receive raises.

In the end, workers achieved none of these things. Under intense pressure from both national union leaders and local politicians, many workers returned to their job sites after only five days. It was the Occupy Wall Street of its day: With few clear-cut goals, the strikers had no single actor with whom to negotiate, no unified political program for which to advocate. Wealthy and middle-class Seattleites could simply hold their breath and wait for the disruption to end, which eventually it did.

Like Occupy Wall Street, however, the Seattle General Strike, which is being celebrated with a Solidarity Centennial series of events, did succeed in shifting the conversation about workers’ rights locally, nationally and even internationally. In the first years after the strike, Seattle-based unions organized additional locals, founded a new political party, experimented with cooperative ownership models and started their own bank. Later that year, organizers who participated in the Seattle strike helped launch a walkout of more than 350,000 steelworkers in the Midwest. In May 1919, Winnipeg, Manitoba, workers, starting with metal and building unions, launched a general strike, leading to solidarity strikes in several other Canadian cities. The Seattle General Strike also would serve as an example to later generations of labor activists whose strikes during the Great Depression resulted in the passage of expansive workers’ rights legislation such as the National Labor Relations Act of 1935, which protected workers’ right to organize and still exists today.

More than achieving a specific goal, the Seattle General Strike demonstrated the power that workers can have when they are committed to acting together. While Seattle of 1919 was an exceedingly different place than the city today (not least in its racial composition: about 96 percent of the city was of European descent then compared with about 65 percent now), many of the economic challenges remain the same. Still far too much of the capital is concentrated in the hands of far too few people. Still workers receive less credit, respect, and remuneration than they deserve. Still mainstream political leaders pay lip service to labor while siding time and again with capital, as was shown so clearly during last year’s debate over the “head tax.”

Paradoxically, the Seattle General Strike teaches us little about strikes, although large-scale worker walkouts can, of course, be effective. The recent teacher strike in Los Angeles, hotel worker strikes against Marriott locations across the country, a walkout by Google employees in protest of the company’s sexual harassment policies, and “sickouts” by airport workers during the government shutdown demonstrate the impact that synchronized, collective withdrawals of labor can produce.

Currently, there is no shortage of concessions that established powers in our city and state could make that would improve workers’ lives: a large-scale investment in public housing, universal healthcare (as was enacted recently in New York City), free public transit, police reform, municipal broadband, subsidized childcare. But none of these will be won without a fight. The labor movement, depleted by attenuating membership and stung by political defeats, has largely confined itself in recent decades to negotiating wages and benefits for members and electing mainstream Democrats.

But the times may be changing. Younger workers, especially, have shown themselves to hold more radical views than those of previous generations. A recent study found that 68 percent of 18- to 29-year-olds favor unions, compared with about 61 percent of workers generally, and more than half feel positively about socialism. Here in Seattle, labor unions continue to hold significant political clout, while socialist groups, like the Democratic Socialists of America (DSA), have grown dramatically in recent years, in part because of the success of national politicians like Bernie Sanders and Alexandria Ocasio-Cortez and of local leaders like Kshama Sawant (who is a member of the rival Socialist Alternative).

Coalitions of progressives, labor groups, and socialists have won significant gains for locals workers in recent years, including a higher minimum wage, guaranteed paid sick and safe time, and secure scheduling for retail and restaurant workers. These are steps in the right direction, but they fail to reach the true depths of workers’ needs: secure and livable wage employment, affordable housing, community-oriented development, accessible childcare.

The Seattle General Strike teaches us that we can — and should — demand more.