'Where are the Black people?' Central District residents get creative to fight displacement 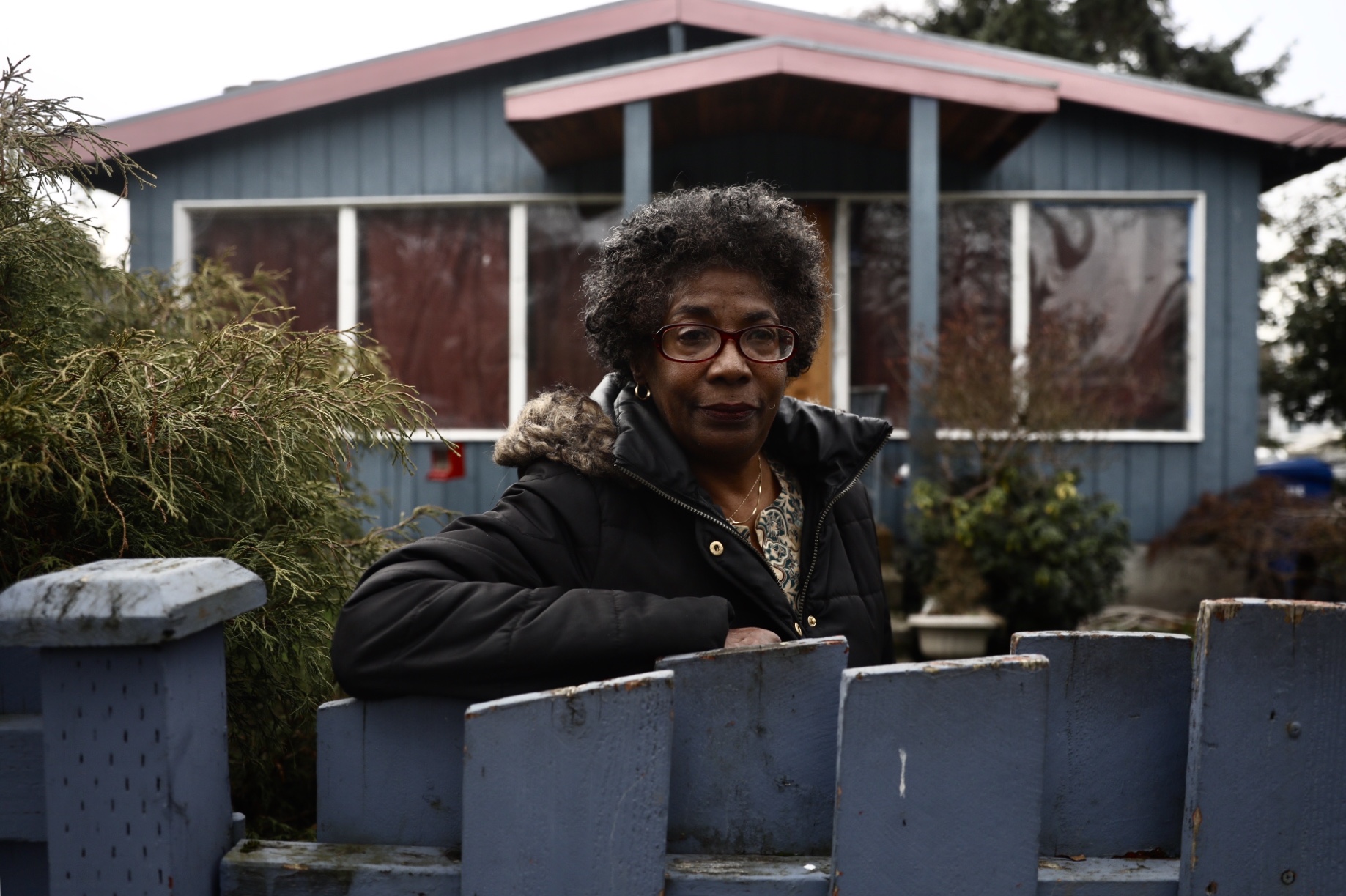 When Ruby Holland moved back to her childhood home in Seattle’s Central District after three decades of living in Atlanta, she was taken aback.

“I was like, 'Where are the Black people?’ Nobody knew. I was surprised."

In 2014, Holland retired from her career as a photographer and returned to Seattle to live with and help care for her older sister Mary, who was living in the home their mom bought in 1963. “When my mom bought her house this was the only place she could buy it,” Holland said. Because of racial restrictions barring people of color from buying homes in most of the city, the Central District became Seattle’s Black neighborhood.

Growing up a few blocks east of Martin Luther King Way and south of Jackson Street in the ’60s and ’70s, Holland says all her neighbors were Black. Today, most of them are white. In the 1970s, more than 73 percent of the Central District’s residents were Black. Today, it’s fewer than 18 percent. The white population has climbed to nearly 60 percent.

The shift has happened in the vortex of Seattle’s massive population growth, rising housing costs, gentrification and corresponding displacement. A wave of wealthier home buyers entered the Central District. Seizing on the demand, developers started buying up old bungalows and replacing them with expensive new homes. Holland said she was getting three to four letters a month from developers pressuring her to sell the house. For many, the temptation is high: Property taxes across Seattle have increased more than 56 percent since 2013, with the median household now paying $5,708 a year.

For low-income residents and elderly residents living on fixed incomes in the Central District, the added costs were often too big a barrier to overcome. Many sold their homes and decamped to less pricey cities in south King County, such as Tukwila and Kent. They took a piece of the community with them.

“I don't drive as much as I used to,” said Holland. “I'm not going to drive to Kent or someplace to visit. My best friend moved to Federal Way. There's no friends I have here now. That's kind of hard.”

But Holland is determined not to join the exodus. While attending meetings about the city’s proposed Mandatory Housing Affordability program, she started connecting with neighbors fearful about rising costs and the pressure to sell. Holland created a packet of “survival tips” with advice for homeowners on how to deal with developers. They include telling them you’re not interested, doing what’s right for you and your family, remembering there’s no rush to make a decision, taking a deep breath and relaxing with a cup of tea.

Holland’s group has grown to about 60 homeowners — many of whom are also elderly, Black and living on fixed incomes that make rising property taxes a very real threat. She calls it Keep Your Habitat. In Atlanta, Holland was on the board of a nature center and was working to plant flowers and plants to help rebuild declining bee and butterfly populations. She wanted to continue this work in Seattle, but after returning she soon realized “I have to save my own habitat.”

This fall, Holland joined forces with Leah Martin, a partner at the small Capitol Hill architecture firm Allied8, as well as University of Washington College of Built Environments professors and urban planners from BHC Consultants. Calling themselves the Central Area Anti-Displacement Project, they are working to find creative ways homeowners can leverage the value of their property to generate extra income to offset rising property taxes. The ideas range from simply renting out a room in the house or a parking space in the yard to more complex land deals involving leasing part of the property to developers who might build backyard cottages or duplexes.

In Seattle, land is one of the hottest commodities and can account for more than 15 percent of a new development’s total cost. Holland notes that many homeowners have large yards that they don’t need as they grow older and become empty nesters. But they need to continue living close to the crucial services and benefits they have in the Central District.

“Most of us with some age on us, we’ve had the big yard, the white picket fence,” Holland said. “That’s not that important to us. We need sidewalks. We need to be close to hospitals. We need to have good public transportation. You can best do that in the city.”

Allied8’s Martin wanted to help homeowners like Holland use that extra space to raise a little money to offset taxes and remain in the Central District. One idea is to have homeowners use ground leases to collect rent from developers for their extra yard space. The developer could then build a backyard cottage or even a duplex or triplex and collect rent from those tenants in turn. A similar idea would extend this concept to developers who want to build basement apartments. At the simpler end of the spectrum, the anti-displacement coalition will show homeowners how to rent a spare bedroom. Holland wants to rent space in her yard to drivers looking for off-street parking.

“There will be no one solution that works across the board,” Martin said.

The clock is ticking. The city is preparing to upzone a large swath of the Central District near 23rd Avenue and Jackson Street as part of its Mandatory Housing Affordability program. The change would help facilitate some of the coalition’s ideas, especially building duplexes and triplexes. But it could also increase the pressure on homeowners to sell.

Finding the right type of developer to get on board will make a big difference, too. Katie Cote, an urban planner with BHC Consultants, thinks the ideal developer would either be a nonprofit housing provider or a small-scale developer interested in getting a steady trickle of rental income over the long term rather than one angling for a quick sale.

Martin and Cote both admit the ground lease plan is complex, and it would require carefully written contracts to protect both homeowner and developer. Even for Holland, the idea of having her home entangled in a complicated owner-developer-tenant relationship is nerve-wracking. But Cote said this approach has potential to turn Central District homeowners’ liability into financial gain.

The coalition is not forging entirely new ground. A company in Portland called Dweller is operating on a similar model. They build 450-square-foot, prefab backyard cottages. Dweller uses ground leases to pay homeowners to put the cottages in their yards and rent them out to tenants.

“At that scale there’s room in the marketplace and it’s not a crazy idea,” said Matt Hutchins, a housing advocate and principal at Seattle’s CAST Architecture, referring to the anti-displacement coalition’s backyard cottage idea. “It’s not your traditional developers who are going to be interested. I think it’s going to be a bunch of more middle-income people who are pooling their money [to invest].”

There are signs city government might try similar ideas. Last year, the Seattle City Council directed the Office of Housing to begin crafting a pilot program that would provide low-income homeowners with low-interest loans to build basement or garage apartments if they agreed to rent those apartments out for below-market-rate rents. The Office of Housing is hoping to launch the pilot project this year.

The King County Department of Assessments also is exploring options similar to the Department of Housing pilot: If homeowners are willing to offer a basement apartment to a tenant for below-market-rate rents, then the county would give them a tax break. They are also lobbying state legislators to expand eligibility for the elderly, low-income homeowner property tax exemption program. Currently, the program is available to people living on $40,000 or less annually, regardless of where they live in Washington. King County officials want to see that eligibility number pegged to each county’s median income. Doing so would open the program to many more households in King County, which boasts some of the highest incomes and home values in the state.

“What all this has finally started to bring home to people is our property tax system is broken,” said King County Assessor John Wilson. “It’s not sustainable at this rate. We’ve got to have the tough discussion about how do we modernize our tax system in Washington so we’re not so dependent on the property tax.”

Holland and Martin are still a long way from putting their ideas into practice. But they’ve had meetings with Councilmember Mike O’Brien’s staff and the Office of Housing to try to drum up support. Holland said she’s trying to get Councilmember Kshama Sawant on board, since Sawant’s district includes Holland’s neighborhood. In the meantime, Allied8 has been providing pro-bono property assessments for homeowners in the Central District who might be interested in this experiment.

But whether solutions come from the government or the grassroots, Holland has faith that things will work out.

“Things constantly change. The universe has a way of leveraging things in my mind,” she said “When we save our homes, as an act of faith I’m going plant some flowers to attract the bees and butterflies and help them out, too.”