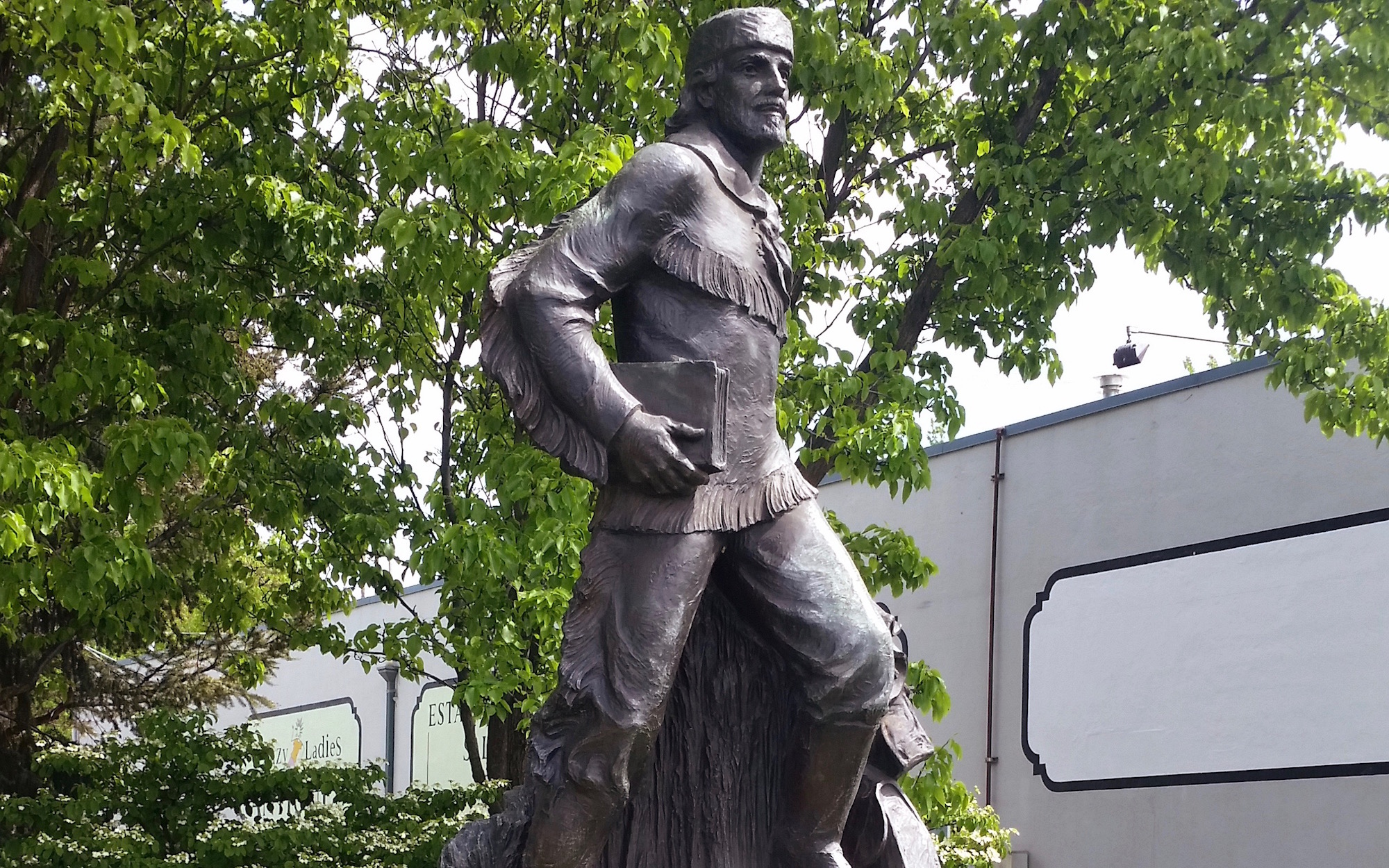 In this photo taken April 21, 2016, a statue of Marcus Whitman stands on city property just outside the Whitman College campus, in Walla Walla, Wash. It's a replica of one that is in Statuary Hall in the U.S. Capitol. (Photo by Tom Skeen/Walla Walla Union-Bulletin via AP)

The re-evaluation of historic monuments in the Northwest has taken a new leap forward with a move by state Sen. Reuven Carlyle of Seattle. He has introduced a bill that seeks to remove statues of Washington pioneer Marcus Whitman from Statuary Hall in the U. S. Capitol and the Capitol in Olympia. Carlyle and his co-sponsors want to establish a commission to look at replacing the statue of Whitman — who also has a state county and a highly regarded college named after him — with someone deemed more worthy from a modern perspective.

The bill says, “The legislature finds that under rigorous, objective review Marcus Whitman does not meet the standards of being one our state's top honorees with a statue display in Olympia and statuary hall in the United States capitol.” It also covers the creation of a commission, which will include representatives of the Washington State Historical Society, the Department of Archaeology and Historic Preservation and others to come up with a plan for replacing the Whitman statues with new historic figures, as well as removing the existing ones. The commission would operate until November 2020.

Marcus Whitman has come under scrutiny in recent years. He was once touted as a paragon of pioneering, but now is often criticized as part of the vanguard of destructive colonialism. On Crosscut, writer Cassandra Tate has covered the Whitman controversy which includes looking at the historical record in a new light and questioning the “whitewashing” of history.

In 2016, Whitman College students changed the name of the student newspaper from The Pioneer to the Whitman Wire due to issues of “settler colonialism and white supremacy in the Inland Northwest” carried by its previous name.  The school also dropped its Missionary mascot.

Whitman and his wife, Narcissa, established an early outpost on the Oregon Trail near Walla Walla in the 1830s. It was a Christian mission, a place of recovery for emigrants, a haven for children orphaned on the migration west. Whitman was a trained physician and offered medical care to travelers and local indigenous people. He is credited with stimulating the preservation of the Oregon Territory as a part of the United States and opening the floodgates to pioneers.

He came under suspicion by the Cayuse tribe for the damage and disruption settlers were causing in the tribe's territory, not the least of which was the spread of disease. Whitman’s failure to save native peoples with his medicine has long been cited as a reason for the discontent among the tribe. Marcus, Narcissa and 11 others were massacred and the mission burned in 1847 by a band of Cayuse that also took hostages, resulting in a punitive U.S. government follow-up called the Cayuse War.

By the late 1940s Washington state was considering who should represent it in Statuary Hall in the U.S. Capitol, where each state gets two statues. Whitman was regarded as a dynamic figure every schoolchild knew as a martyr to Christian settlement of the frontier. His statue features an imaginary figure of a buckskin-clad pioneer carrying a Bible and saddlebags. No images of Whitman exist, so sculptor Avard Fairbanks had to carve him as a symbolically heroic frontier figure.

Private funds were raised for the statue and a commission involved with the selection at that time featured a membership heavily weighted with members from Eastern Washington. The statue’s dedication at the U.S. Capitol in 1953 featured an address by Washington-born Supreme Court Justice William O. Douglas, who lauded Whitman’s role in furthering Manifest Destiny, and remarks by then-Vice President Richard Nixon, who said he hoped the spirit of Marcus Whitman would pervade the Capitol. A duplicate of the statue is in Olympia.

A second figure was added to Statuary Hall and Olympia in 1980: that of Mother Joseph, a Catholic nun of the pioneer era who established hospitals and Indian schools around the state. Indian schools generally have undergone scrutiny in recent years for their roles in extinguishing indigenous cultures. She is in an attitude of prayer. As I pointed out in a previous column, it does seem odd that in a very secular state both of Washington’s honorees are Christian frontier missionaries. Carlyle’s bill does not address her worthiness for such an honor.

Questioning the appropriateness of historical markers has become commonplace in the Northwest, as well as the subject of national controversy. I tend to view it as healthy, especially if people dig into history and debate the pros and cons. Monuments might be set in stone, but they need not be stuck in the past if people engage and re-evaluate them in terms of contemporary values. People have protested Confederate memorials in Washington as honoring the fight to defend slavery, demanded the removal of totem poles at a Pike Place Market park as examples of cultural appropriation, and forced the taking down of a statue of Canada’s first prime minister, John D. MacDonald, at the city hall in Victoria, B.C. because it portrayed a man held responsible for instigating “the cultural genocide of indigenous peoples” in Canada.

Still, whatever one concludes about Marcus Whitman’s worthiness, it’s a bit unfair to think that only two historical figures can represent Washington’s history. In 1978, Lou Guzzo, the former newspaper executive and TV commentator who was aide to then-Gov. Dixy Lee Ray, advocated a statuary hall here in Washington to memorialize our famous figures. Given the current climate, it might be nice to have such place, this time where removed statues and markers could find a home. This cabinet of curiosities could tell the story of how our notion of heroes is evolving over time.