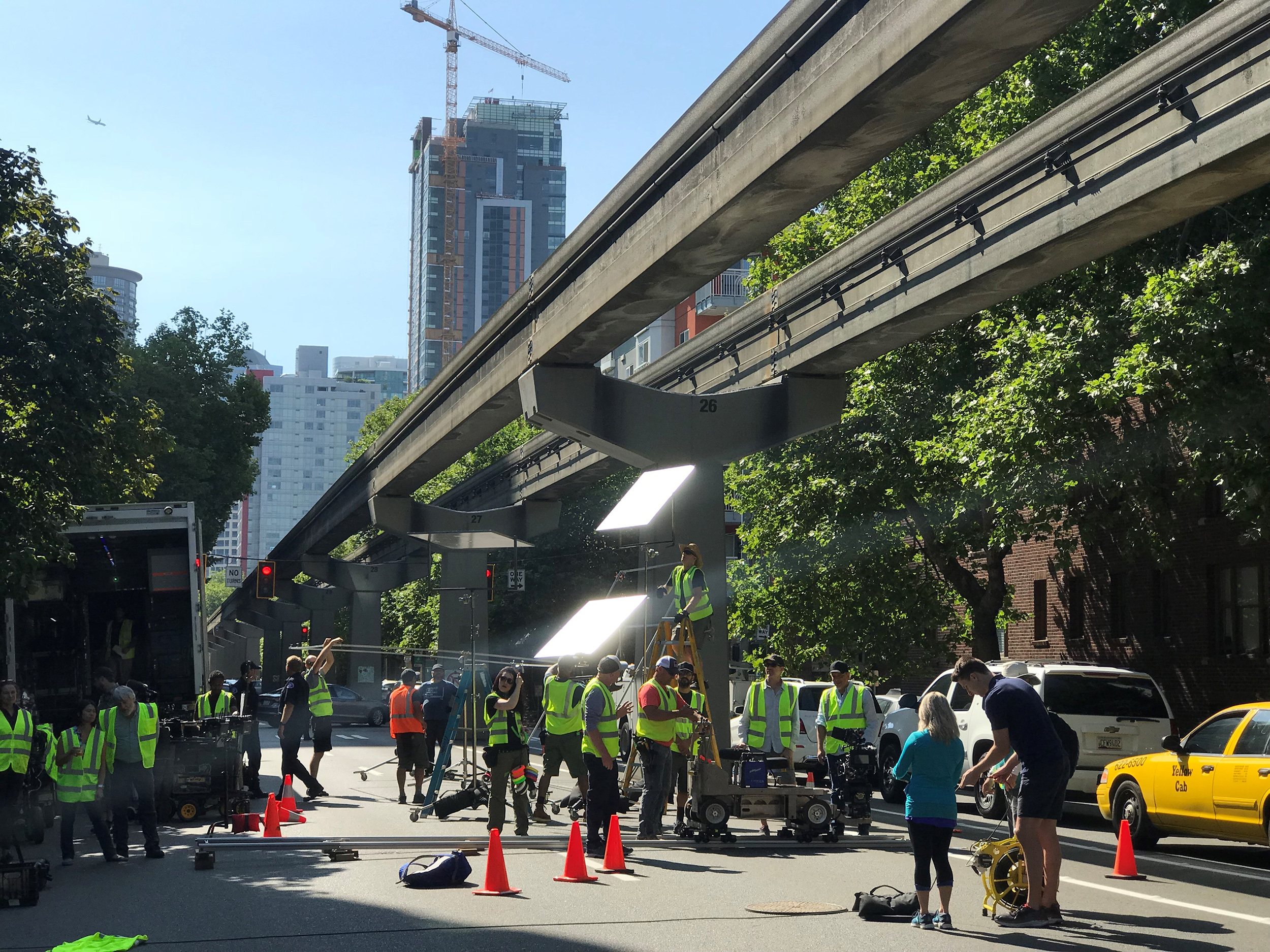 Downtown Seattle is a popular filming location for indie movies, commercials and television shows (such as ‘Station 19,’ seen here mid-shoot under the Monorail). But the viaduct closure will wreak havoc on film shoots due to severely limited permitting and impeded crew mobility. (Photo by Taylor Durand-Scaggs)

Scene: a Monday evening in late December, rain pouring down on Seattle as it always does in movies set in the city. Rush hour traffic creeps across town, white headlights and red stop lights smearing together against wet windshields. Location: The Clock-Out Lounge on Beacon Hill, a dark bar where the Seattle Office of Film and Music is hosting a mixer to inform local filmmakers about how the Alaskan Way Viaduct closure will affect their livelihoods. As the room fills, colleagues greet each other over beer and free pizza. Raincoats drip drops on the floor.

“This is the shock-and-awe part of the presentation,” says Chris Swenson, a program manager with the city office. Standing on the small raised stage at the back, he takes the crowd through a slide presentation explaining the gravity of Seattle’s forthcoming “Viadoom” — specifically, its impact on film sets and crew mobility.

Noting that some 60,000 cars will soon be displaced with the viaduct’s absence, he says, “This will be an absolute paradigm shift for drivers.”

The same goes for film and television makers — indie and big budget, creative and commercial — who use Seattle streets to park trailers and trucks, and to carry actors, directors and production staff from location to iconic location.

Seattle Film Permits By the Numbers

The point of the disaster-movie style warnings, Swenson says, is to get ahead of the problem. Filmmaking is a high stakes, quick turnaround business with many moving parts and unusual requirements — namely, doing things that aren’t generally allowed on streets and in parks. The ability to transport equipment, cast and crew between shooting locations quickly is crucial to the bottom line. For filmmakers, the issue is really as much about moving through the city as it is about losing access to the places that scream Seattle.

“You want to film at Fisherman’s Terminal and West Seattle in the same day? You probably can’t physically do that,” Swenson says. A nervous murmur runs through the congregation. A fresh round of placating deep-dish pizzas is set on a long table in front of the stage: pepperoni, veggie and something called “Bluto.”

The thick scent of baked cheese descends on the room as Swenson runs through impressive stats: Seattle issues more than 500 film permits annually for streets and parks. About 60 percent of those shoots are commercial and corporate (ads for cars and local companies), and 20 percent are feature films or episodic shows (such as Grey’s Anatomy and its spin-off, Station 19). Each year, about 5,000 local cast and crew members are hired for these gigs — well-paying jobs that Swenson says place film production at the center of Seattle’s creative economy.

But as part of the Seattle Squeeze, there will be no street permits issued for downtown and arterials during the initial closure of the viaduct, from Jan. 11 to Feb. 4.

Swenson’s next presentation slide reveals the biggest spoiler: From February through 2024, there will be limited permits available for popular locations (such as Pike Place Market, the Seattle waterfront and Pioneer Square), limited Seattle Police Department officer availability for traffic control, and more competition for street use (such as from construction crews). Swenson looks around at the room full of widened eyes, and says, “Things will start to slow down around 2022.”

“I’m not trying to sugarcoat it,” he says from the stage. “This will impact the jobs you’ll be able to get.” That’s why his office, alongside Washington Filmworks (the state film office), is working to streamline the permitting process, inform out-of-state clients that Seattle film shoots will require more advance notice, and develop creative workarounds. The primary goal, Swenson says, is to “keep productions local.”

One way to do so? Body doubles. Of a geographic sort. The city and state film agencies are working with several local scouts to come up with locations in Shoreline, Renton, Everett and Tacoma that could stand in for Seattle.

“We’re kind of hosed on the Space Needle,” says location manager Dave Drummond. “But for, say, Pioneer Square, with the old brick buildings, what else might look like that? Tacoma’s theater district is a prime candidate.” Old-town Ballard, he suggests, might also be “far enough outside the Viadoom zone” to be a reasonable replacement. Drummond says once you remove the locations that “everyone wants to point a camera at” (such as Pike Place Market), there are solid options for capturing a Seattle vibe.

Filmmakers seeking “a sleek building that looks like it’s from the future,” Drummond said in a follow-up interview, might consider replacing MoPOP with the Museum of Glass in Tacoma. Up north, Everett’s mossy neighborhoods could serve as stand-ins for Seattle’s residential areas. And to replicate the many shoots that take place in Gas Works and other waterfront parks, he said, “Shoreline has great options that show Northwest beaches, waterfront views and ferries.”

As for whether production companies will look to Vancouver, B.C. — with its unbeatable tax incentives for filmmakers — as a Seattle replica (see: Fifty Shades of Grey and AMC’s The Killing), Drummond isn’t too concerned. “[Vancouver] made a decision 20 to 25 years ago to invest in movies. Now B.C. caters to marquee Hollywood productions. Our niche is smaller movies and commercial work, so we don’t really compete with them.”

Woman 1: “Right now I schedule production meetings between 10 a.m. and 3 p.m. to avoid downtown traffic. Will that work?”

Swenson: “That window will absolutely shrink.”

Woman 2: “What about filming at odd hours?”

Swenson (encouragingly): “Yes, the more you can film on the margins, the easier it will be.”

Woman 3: “Have you considered selling stock footage of iconic locations during this time?”

Swenson (with hesitance): “Yeah, but that would kill jobs.”

Then Amy Lillard, from Washington Filmworks, chimes in, “The city is going to change so much that the stock footage will have to be reshot. So the good news is that will mean more work, when this is over.”

She’s not the only one hoping for a Hollywood ending to Viadoom (a literal block buster). “By the end of 2024 we’ll be a golden city,” Swenson says, with a beautiful new waterfront and even more enticing locations to draw productions here. Once the adjusted traffic patterns are the new normal, he says, “I think it’ll actually be pretty awesome.”

The final slide remains projected on screen. It’s a photo of a nighttime shoot on the eastern shore of West Seattle. Across the Puget Sound, the downtown skyline shines.

“Questions?” the slide reads. Swenson smiles and starts to leave the stage, stopping to announce that there are six whole pizzas left.

“Eight!” someone yells from near the bar.

There is so much pizza. But never enough to fill the hole left by the Viaduct.