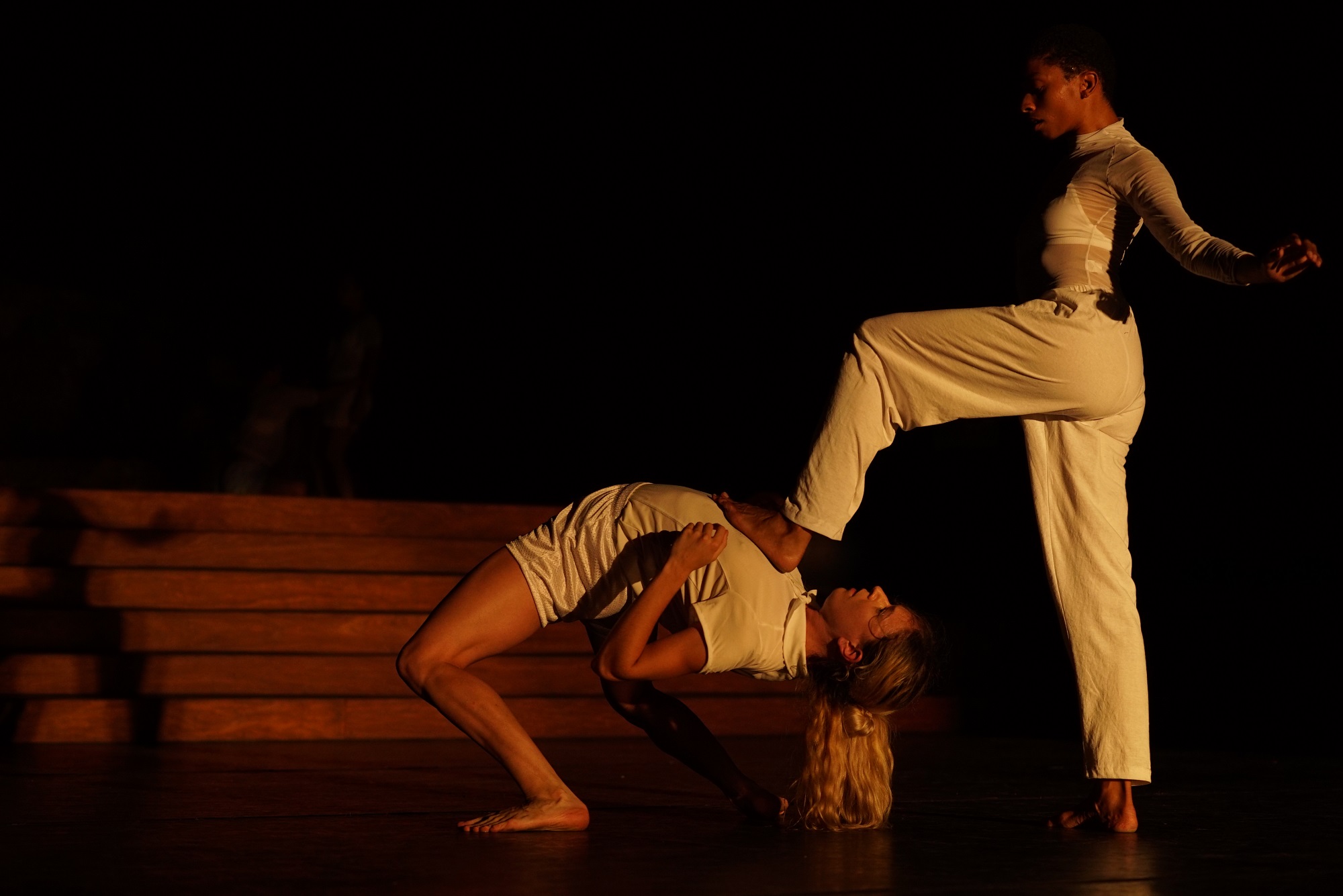 Seattle native Mark Morris has been wowing audiences with his particular brand of folk-inflected dance since founding his company in 1980. Just when you think you have his style pegged, he brings something out from left field (and often cracks up audiences with his clever wit in the process). For this show, the bill includes the pretty-as-a-spring-bouquet Dancing Honeymoon; the much-lauded Numerator, for six men who seem to evolve before your eyes; and The Trout, in which no fish are harmed. –B.D.

Nicola Gunn: In Spite of Myself

How best to respond to a man throwing rocks at a duck? Last weekend, Melbourne-based performance artist Nicola Gunn took the stage at On the Boards and laid out all possible options, with verbal digressions regarding the fictional detective Hercule Poirot, celebrity chef Yotam Ottolenghi, fellow performance artist (and noted durational stare-er) Marina Abramovic and also the slippery area of moral judgments. All the while she was carrying out a meticulous if intentionally galumphy choreography (jumping and slumping, rowing herself like a boat across the floor), and the result was hilarious, multi-layered and incredibly smart. This weekend she’s back with a different piece, called In Spite of Myself, which involves “her fictional self as the subject of a fictional retrospective of her fictional work.” Looks like we’re in for more layered wit — can’t wait. -B.D.

Seattle dancer Lavinia Vago might be a replicant. Her moves are both too bendy and too articulated to be those of a simple human. But by all accounts she is one of us. She left her native Italy to attend Cornish College and went on to perform with local choreographer Kate Wallich. Now she’s presenting the world premiere of her first solo work, NOEISIS X, an intensely physical meditation on performance that she says was highly influenced by her work in dance for Parkinson’s patients. “Even when the mind is affected neurologically, the body stores so many memories and emotions that can appear in dancing, sometimes even unconsciously,” Vago told me after a recent rehearsal. “I am not trying to recreate any of these concepts in my performance, but I know I am deeply affected by the idea of disappearing into movement.” Set to throbbing low-frequency club music in the haze of a fog machine, she plays with how we present our bodies to others — and how our bodies rebel. Also on the split bill is Los Angeles-based dance company Szalt, which has its own share of striking images in store. –B.D.

Last year’s Crazy Rich Asians was a box-office smash at movie theaters, and is considered a sign of major progress for Asian representation in Hollywood. But the Asian culture it celebrated was highly limited (and mostly a fairy tale). By contrast, the Seattle Asian American Film Festival is known for showcasing an incredibly diverse chorus of voices in films by and about Asian Americans. This year’s lineup spans a fascinating range of topics — why more than 50 percent of nail salons are Vietnamese-owned, a comedian in search of the Lao father she never knew, a Chinese American lesbian in drug recovery, the Japanese American soldiers who did translations for U.S. Intelligence in World War II, the rise of Filipino food trends — in a mix that’s truly crazy-rich. –B.D.

U.K. duo Maribou State dwell on the softer side of electronic music, the one that eschews propulsive oontz-oontz rhythms in favor of beautiful melodic idylls. Their 2018 album Kingdoms in Colour sculpts whorls of keyboards, guitars, vocals and inscrutable instrumentation into sinuous and sensuous panoramas, a dreamy, iridescent incantation similar to Seattle’s own electro-utopian superstars Odesza. When Maribou State does fall back on a beat, it’s typically in the vein of shuffling, strutting jazz or R&B — groovy stuff that can provoke a dance floor. Their performances typically feature live drums and percussion, a huge array of keyboards and guest vocalists. This is their Seattle debut. –J.Z.

Latinx writers in the Pacific Northwest

In her new book Brother Bullet, a local writer puts the aftermath of her brother’s unsolved murder in ink. At Hugo House, Casandra López will read from the collection, which explores the drive-by shooting via poems that expose the unabridged feelings that come with irreparable experiences, and stanzas that dig into how pain radiates beyond that moment. “Carve the tender out, I must make room for a weight that never leaves,” reads one line. López, an English teacher at Northwest Indian College in Bellingham, will be joined by fellow Latinx writers Isabel Quintero and Kathleen Alcalá. The event aims to explore the way the Pacific Northwest has shaped Latinx writers and their identity, and will also showcase “the diversity of types of writing, from poetry to middle grade novels” that the community is producing, according to Alcalá. In addition to Brother Bullet, readings include Quintero’s children’s book Gabi, A Girl in Pieces and Alcalá’s “Los Ahogados” (“The Drowned”), a short story that builds on the classical Latin myth of La Llorona. Q&A session with all three authors afterward. –Agatha Pacheco Flores

If you go: Latinx in the Pacific Northwest at Richard Hugo House, Feb. 22 at 7 p.m. (Free)

The (R)evolution of Steve Jobs

When you hear the name Steve Jobs, what’s the first thing that comes to mind? Apple founder. Tech genius. Opera fodder? That last one seems less likely. But the reviews are in and The (R)evolution of Steve Jobs is a hit. It just won the Grammy for Best Opera Recording (by the Santa Fe Opera) and is about to make its West Coast debut at Seattle Opera. The nonlinear plot paints Jobs’ life in 18 key events, with an appropriately high-tech stage that shifts from a garage to giant wall of iPhones to an LSD trip in a park. Jobs’ vision, questionable interpersonal skills, demotion by the Apple board, interest in Zen Buddhism, early death — it’s all there, it’s all in song and, suddenly, it all makes sense as an opera. -B.D.

It was 1968 (of course), when a bunch of creative local hippies decided that dropping an upright piano from a hovering helicopter would make for a far-out sound. Local nonprofit radio station KRAB (which became the Jack Straw Foundation) coordinated the event on a farm in Duvall, with Country Joe and the Fish as musical guests. Fifty years later, Seattle musicians (Amy Denio, Gust Burns, Luke Fitzpatrick, Brad Hawkins and many more) are commemorating the Piano Drop by performing new compositions on the rescued remains of that smashed piano. It’s the sort of artful strangeness that once ran rampant around here — how nice to hear it burble up from broken strings. –B.D.

Oscar Sunday is this weekend, and the award for most mercurial performance goes to the Motion Picture Academy itself! For announcing (and rescinding) a new “most popular movie” category, for announcing (and rescinding) a plan to present four awards during the commercials, and for the host/no-host drama. With this kind of last-minute shuffling, something weird is bound to happen during the live broadcast. Consider watching it on the big screen at the black-tie and truffle-popcorn Century Ballroom Viewing Party, with irreverent hosts Waxie Moon and Rebecca Mmmm Davis. The venue’s old-school glamour is the perfect setting for silver screen antics (and schadenfreude). –B.D.

Hip-hop, electro-tinged soul and pop-leaning R&B are right now Seattle’s most fertile musical genres, and the only record label in the city that consistently releases vinyl in those styles is Crane City Music. Since 2017, CCM has dropped a handful of albums by Seattle’s most cutting-edge acts, with particular emphasis on women and nonbinary folx, and each record comes lavishly packaged with gorgeous cover art and colored vinyl. As the preeminent tastemaker in the field, Crane City convened an Instagram-based contest to determine the best Seattle hip-hop albums of 2018 and tonight the results, tabulated from more than 500 individual votes, will be announced at the freakin’ Laser Dome. It looks to be a rather 420-friendly affair, as host Stas THEE Boss plays Crane City cuts and counts down the top picks amid a blazing light show and 10,000 watts of amplified sound. –J.Z.

Released earlier this month, Gallipoli, the fifth album from indie-rock veterans Beirut, is another entry into the group’s catalog of gorgeous, wistful chamber pop. Bandleader Zach Condon, a globe-trotting troubadour rarely in possession of a mailing address, uses his voice as an instrument in the classical sense, adorning its rich resonance with a warm breeze of brass, strings, ukulele, sundry percussion and, notably, the Farfisa organ he first began recording with in his hometown of Santa Fe in the early ’00s. The result is something like an orchestra of sighs, deeply emotive stuff that’s meticulously restrained yet attuned to melody and composition. In today’s musical landscape, there’s nothing else like Beirut. –J.Z. 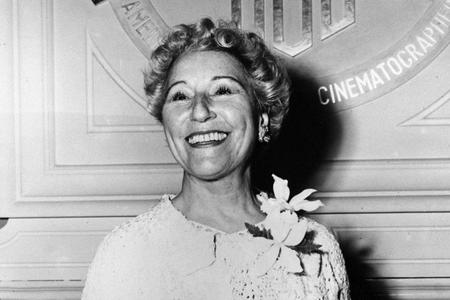 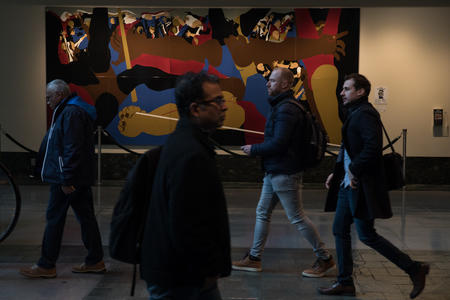 The Jacob Lawrence Gallery rings in 25 years at the University of Washington.

The Jacob Lawrence Gallery rings in 25 years at the University of Washington.