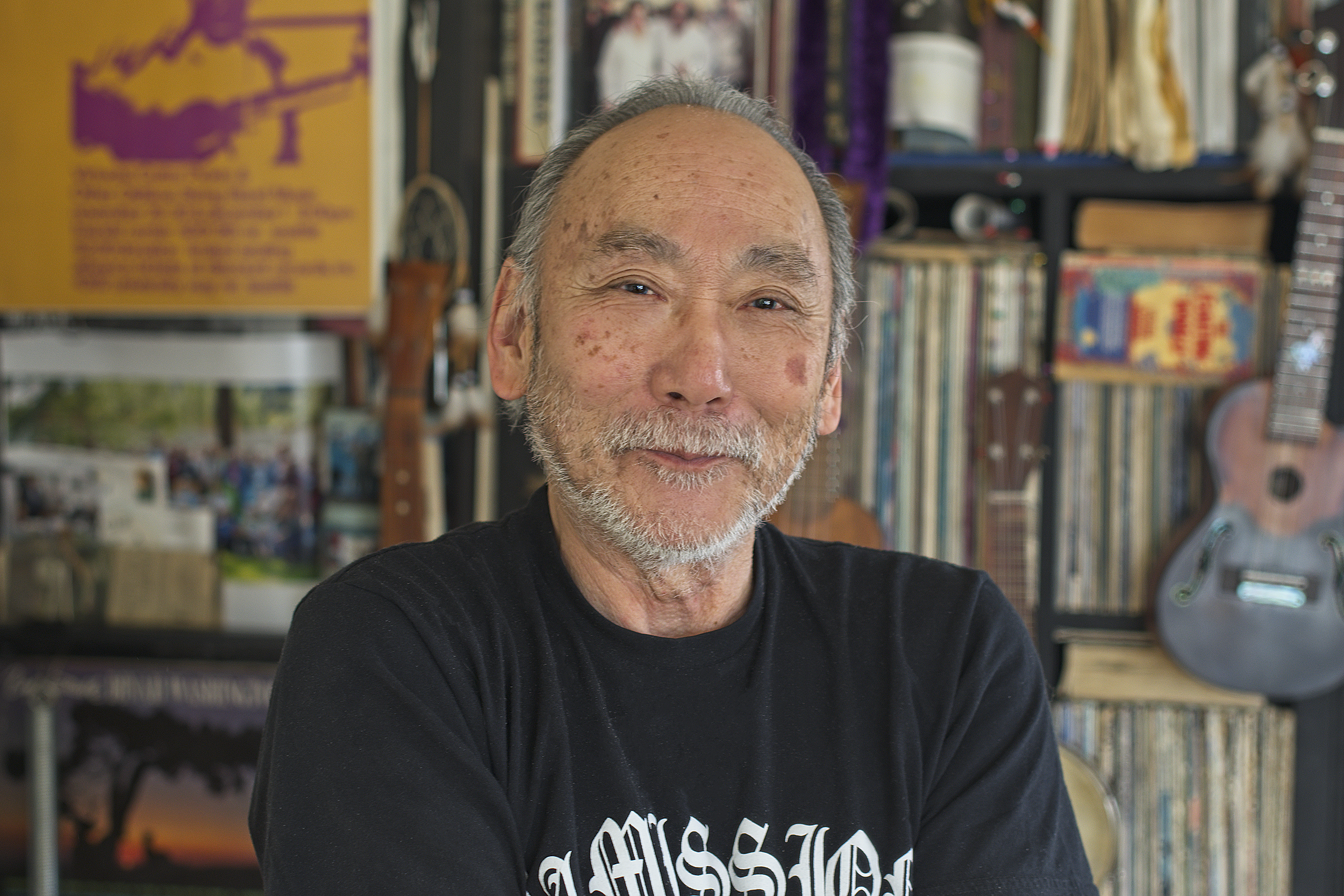 At his home in Beacon Hill, Mike Tagawa sits in front of shelves jammed with books, record albums and memorabilia from his activist life. Dangling in front of the shelves are stringed instruments, which he plays and repairs. (Photo by Glenn Nelson)

On certain days, Mike Tagawa might say his biggest claim to fame was that Jimi Hendrix left Seattle still owing him a quarter. They were classmates at Garfield High School and Washington Junior High — back when he knew Hendrix as James — and they’d sneak out of class for smokes. One day, 25 cents passed between the two impoverished boys, one who couldn’t afford to lose the sum and the other who couldn’t afford to pay it back.

It’s more than a two-bit memory, for sure, but only part of a richer cache that makes Tagawa a living intersection of formative civil-rights history in Seattle and the city’s most interesting and unheralded 75-year-old leftist activist you’ve probably never heard of.

Tagawa turned 75 on Feb. 19, the date on which Franklin D. Roosevelt in 1942 signed Executive Order 9066, clearing the way for the forced removal of 120,000 people of Japanese descent from the West Coast. Among them were Tagawa’s parents and three older siblings; they were incarcerated at Minidoka, a Japanese concentration camp in southeast Idaho, where Tagawa was born, two years later, behind barbed wire.

His birthday also is marked annually by Japanese American communities across the country as the Day of Remembrance, the first of which occurred in Seattle in 1978. Both fall within what now is celebrated as Black History Month, another apt twist for Tagawa. He was one of a handful of Japanese Americans who belonged to the Black Panther Party, serving as the Seattle chapter’s minister of education.

These days, Tagawa has only a landline telephone, a television hooked up to an antenna, and no internet connection. Yet he remains plugged in and has much to say. A lot of that is delivered with a kind of look that suggests he knows more than he is letting on. He wears such an expression as he addresses the fact that his old neighborhood commonly is referred to as the CD.

“When anyone asks what CD stands for,” he says, “we’ll say Central Area, the CD.”

Tagawa now lives on Beacon Hill, where his home is a monument to all the fortuitous zigs he took where most others might have zagged. His shelves are stuffed with books, from the revolutionary thoughts of Che Guevara to a coffee-table volume of lynchings that he shows visitors as proof of our country’s abhorrent capabilities. Amid the activist memorabilia are mementos from what seems like another life. He volunteered for military service for the country that dragged his family to Minidoka. Tagawa later spent 36 years driving buses for Metro. And he gets calls from people looking for the longest tenured off-site repairman for the guitar company C.F. Martin, a mantle he claims.

“I searched for you and found a Mike Tagawa who was a member of the Black Panther Party,” they’ll say. He confirms, to their surprise, that’s him, too. They might be shocked to know that this white-haired man with a gentle soul once stormed Rainier Beach High School with other Black Panthers over rumors that Black students were being bullied by whites. Tagawa recalls standing with Seattle police outside the school, a .357 Colt revolver slung over his shoulder.

“Those were different times,” he says.

They were times when Tagawa and the Black Panthers believed they were part of a worldwide movement, and the only impediments to what seemed like inevitable change were right in front of them — local government and police. The Panthers believed they were on equal footing with, maybe even outgunned, the latter. Today’s police are armed-to-the-teeth militia and American society is too splintered to offer much resistance to misguided authority, Tagawa finds.

Tagawa remains loyal to his roots with Seattle’s Freedom Socialist Party and its radical feminism he finds so attractive. But he’s fought the powers that be, and much in the world that he held so dear has been gutted or destroyed: Seattle’s Japanese American community, the Black Panthers, the CD. Income inequality, gentrification and plunging civility have materialized in their stead.

No surprise, Tagawa blames his emerging pessimism on two-plus years of beatdowns by Donald Trump. He says the president’s biggest impact has been revealing the vast limits to which people can be pushed without pushing back.

“There is a lot more diversionary bullshit in our lives,” Tagawa says. “Back in the day, it was more black and white. Today, all of our energy is being dissipated in so many different ways, I don’t see how people can unite behind any kind of action. Our disenfranchisement and alienation just keep increasing, and the pressure on people just to survive also keeps on increasing.”

Tagawa has to check himself. He says his 75 years have yielded “balance,” and even the bad has helped him grow. A few years ago, he decided to memorialize some of the not-so-good, having “11820-F” tattooed in a conspicuous place. Many have guessed incorrectly as to its meaning; one young woman surmised the tattoo was his girlfriend’s phone number. The numbers were assigned to his family at Minidoka, the F signifying his place in the Tagawa pecking order. After debating various parts of his body, Tagawa decided to place the tattoo on his right hand, where he would have to look at it the rest of a life lived so unexpectedly yet true.