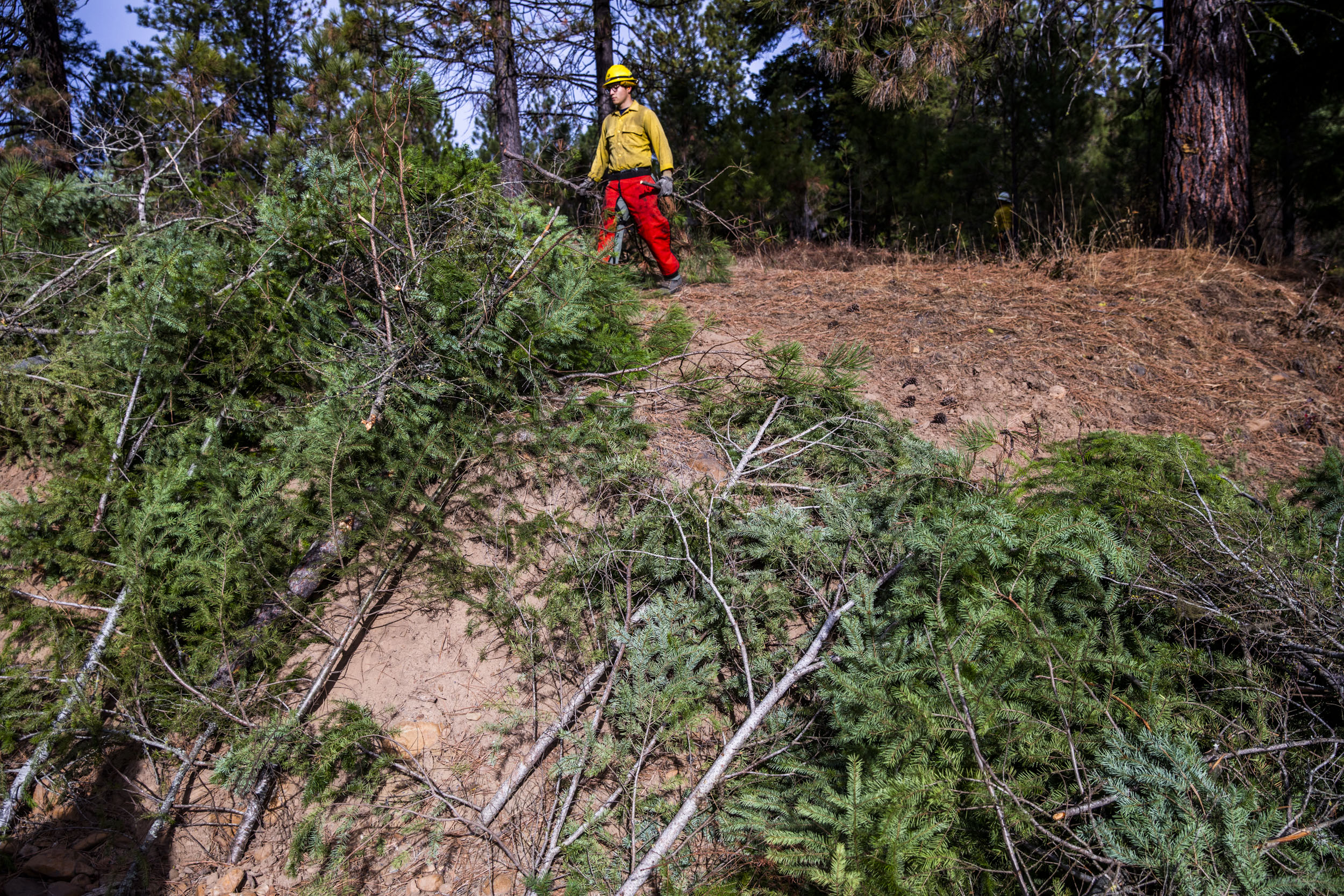 Crews work on thinning parts of the Teanaway Community Forest on Oct. 24, 2018, as a part of Washington state Public Lands Commissioner Hilary Franz's forest health treatment plan. The Department of Natural Resources is implementing the treatment plan, which uses sections of dying forest for cross-laminated timber. Franz says this plan will also help keep down the cost of wildfire suppression and make forests more resilient to wildfires. (All photos by Dorothy Edwards/Crosscut)

The smoke we inhaled in Seattle from the region’s burning forests last summer literally brought home the problem of wildfires. Not only can such fires damage property, the climate and the economy, they also pose danger to life, health and general welfare. The fires are a major producer of carbon pollution, second only to transportation in this state.

In 2018, the state Department of Natural Resources responded to more than 1,850 wildfires, a record high. Across Washington, 440,000 acres burned.

Symbolized by the heavy clouds of acrid yellow haze, our state’s wildfire problem might contain a silver lining. What if preventing or limiting these fires improved forest health, boosted rural economies, and helped solve urban problems like housing affordability? DNR has laid out a path to this hat trick, and is hoping that the current legislative session will enhance its plan in the new biennial budget being forged in Olympia.

DNR oversees more than 5.6 million acres of state lands, including 3 million acres of forests designed to provide timber sales that generate funds to build new schools. The forests, in essence, are protected for commercial, recreation and ecological purposes, but also to produce revenue for kids. They constitute a massive evergreen portfolio to be managed across generations for public benefit. The department’s mission includes ensuring forest health and fighting wildfires statewide.

I got an outline of how the strategy for preventing fires and building housing could work as I bounced up a rough dirt road with Public Lands Commissioner Hilary Franz, who leads the DNR. A Seattle attorney and former executive director of the sustainable development advocate Futurewise, Franz was elected to the position in 2016. She seems to have the energy of a venti-fueled dynamo and a mind that works at a wildfire pace. 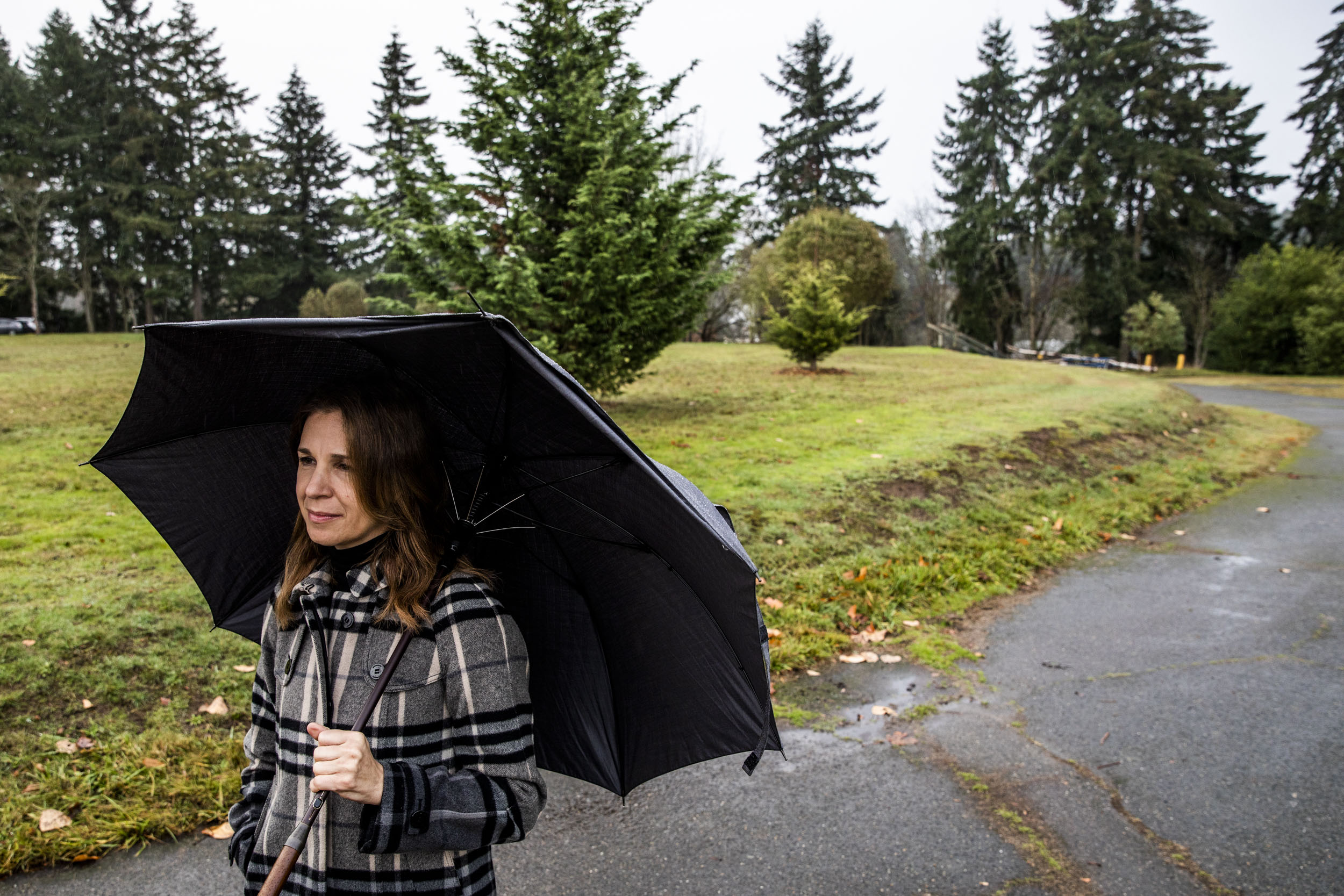 We met at a coffee shop in Cle Elum, just east of the Cascade crest, then headed out of town in a four-wheel drive. Yellow fall leaves were still on trees in that gorgeous Montana-like country, where Douglas firs and larches mingle amid nearby mountains that loom over the farms and ranches of the Teanaway Valley.

Along the deeply rutted road, we joltingly traveled to a stand of trees being done in by an infestation of tussock moths that kill and weaken Douglas firs. Some of the trees looked brown and dead; others seemed healthy but are likely infested. Larry Leach, assistant regional manager for state lands in this part of eastern Washington, gave a quick tour. These trees, he said, “don’t know they’re dead yet.” He said he’s surprised at how quickly this stand was killed off.

This spot is on the itinerary because the smaller dead and dying trees dry out, become hosts for other pests, like beetles, and provide fuel for fires. Thinning these woods could help reduce the odds of fire or its intensity. But what do you do with dead or dying timber that’s too small for milling into traditional lumber? Franz advocates creating a market for it.

Wood found in sick stands like these can be used to create mass timber, which are prefabricated wood products such as cross-laminated timber. CLT is a compressed wood building material that is increasingly promoted as a safe, inexpensive alternative to steel and concrete. It is being tested for construction at several school sites in the state, including Maple Elementary in south Seattle, and is being touted for high-rise construction. CLT also is a means of sequestering carbon, which is a natural process in wood. The Washington Building Code Council has approved use of mass timber in buildings as high as 18 stories, and the new regulations are scheduled to kick in at the end of the current legislative session.

The wood for this use is abundant. Franz says there are some 2.7 million acres of dead and dying timber in the state. Salvage logging from previous fires is also a source. We visited the matchstick forest left by the devastating 2017 Jolly Mountain Fire, near the head of the Teanaway River, a critical watershed. Timber mills, such as Vaagen in Colville, are converting to produce cross-laminated timber and contracting with DNR for their products. This kind of market, with mills throughout the state, could turn forest thinning from a cost into a revenue stream.

DNR’s 20-year forest health plan calls for restoring some 1.5 million acres of state, federal and private forest by 2033. This year, the department hopes to generate 20 million board feet of millable timber. An annual pace of thinning 70,000 acres of forests can, over two decades, potentially provide steady supply for the CLT market, boosting timber and mill jobs.

CLT is not universally accepted in the environmental community. Some activists believe it will lead to more aggressive logging and even a resurgence of clear-cutting because it would create a market for the debris left behind. Other groups, such as Seattle’s Forterra, are major advocates of CLT and other mass timber products.

The intended result is that thinned forests will be made healthier and that wildfire fuel will be converted into a product that can turn into housing, benefiting rural and urban areas across the state. “Every step of the way there’s an economic benefit,” says Franz. This goes far beyond simply “raking” forest floors, as our president recently suggested. 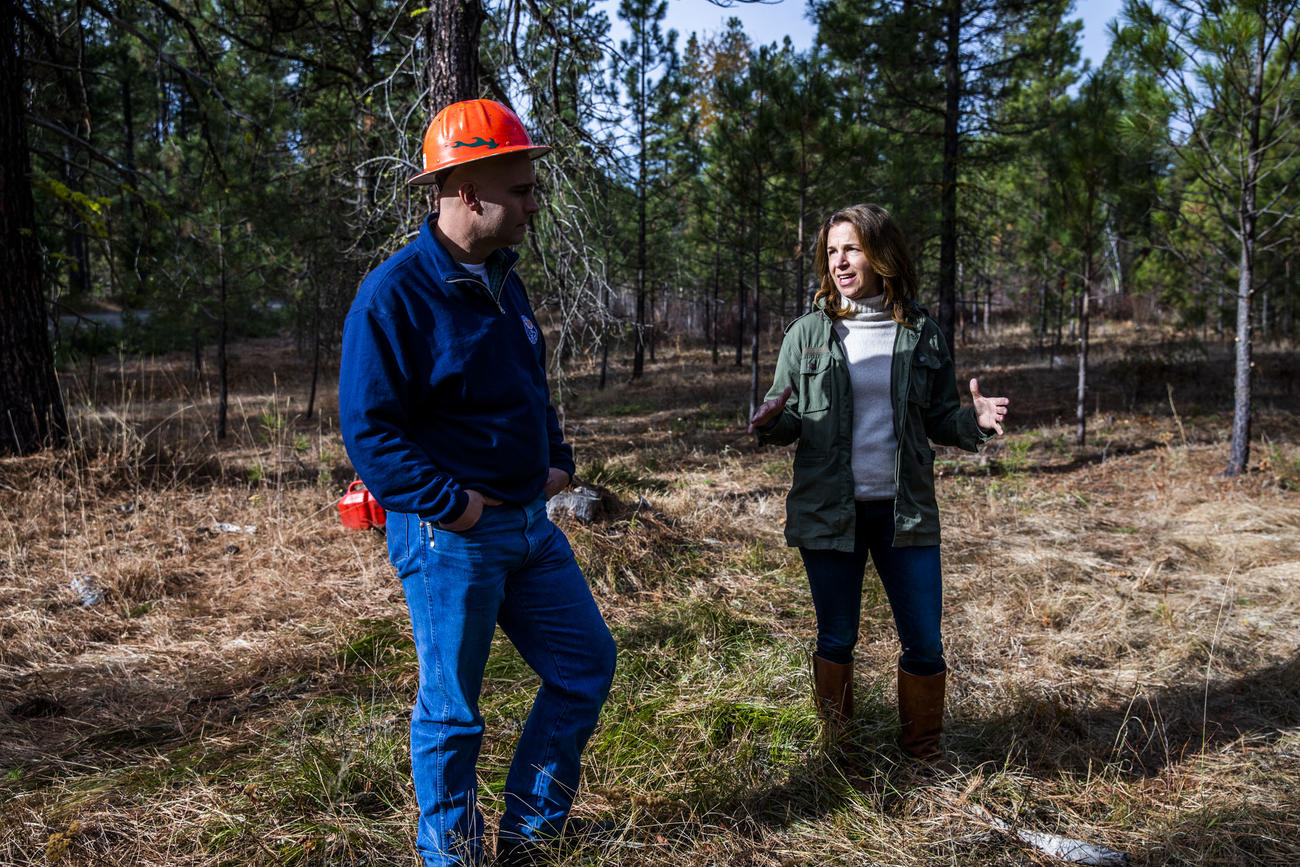 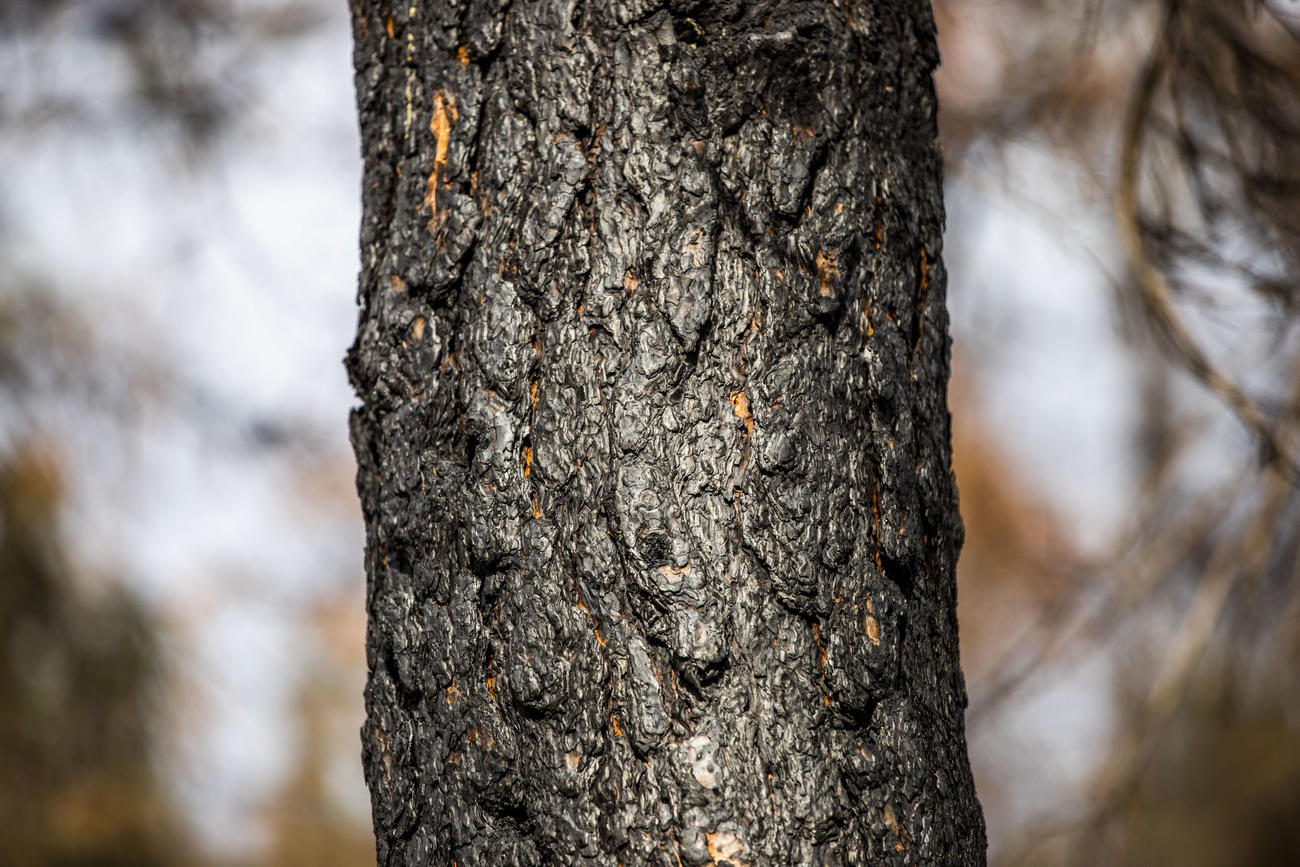 A charred tree at the site of the 2017 Jolley Mountain Fire on Oct. 24, 2018. The Department of Natural Resources is implementing a forest health treatment plan that uses dying forest for cross laminated timber.

A charred tree at the site of the 2017 Jolley Mountain Fire on Oct. 24, 2018. The Department of Natural Resources is implementing a forest health treatment plan that uses dying forest for cross laminated timber. 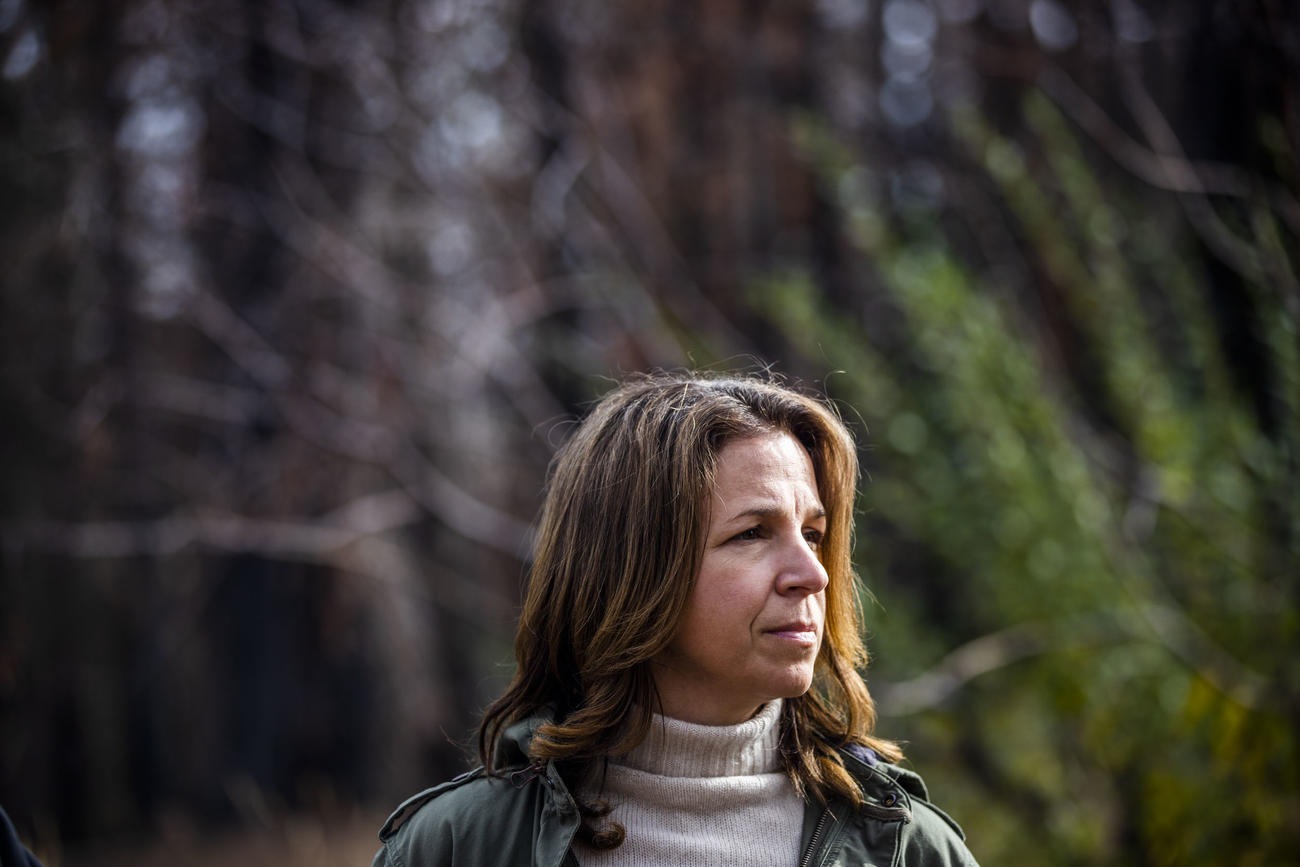 Public  Lands Commissioner Hilary Franz at the site of the 2017 Jolley Mountain Fire on Wednesday, Oct. 24, 2018.

Public  Lands Commissioner Hilary Franz at the site of the 2017 Jolley Mountain Fire on Wednesday, Oct. 24, 2018. 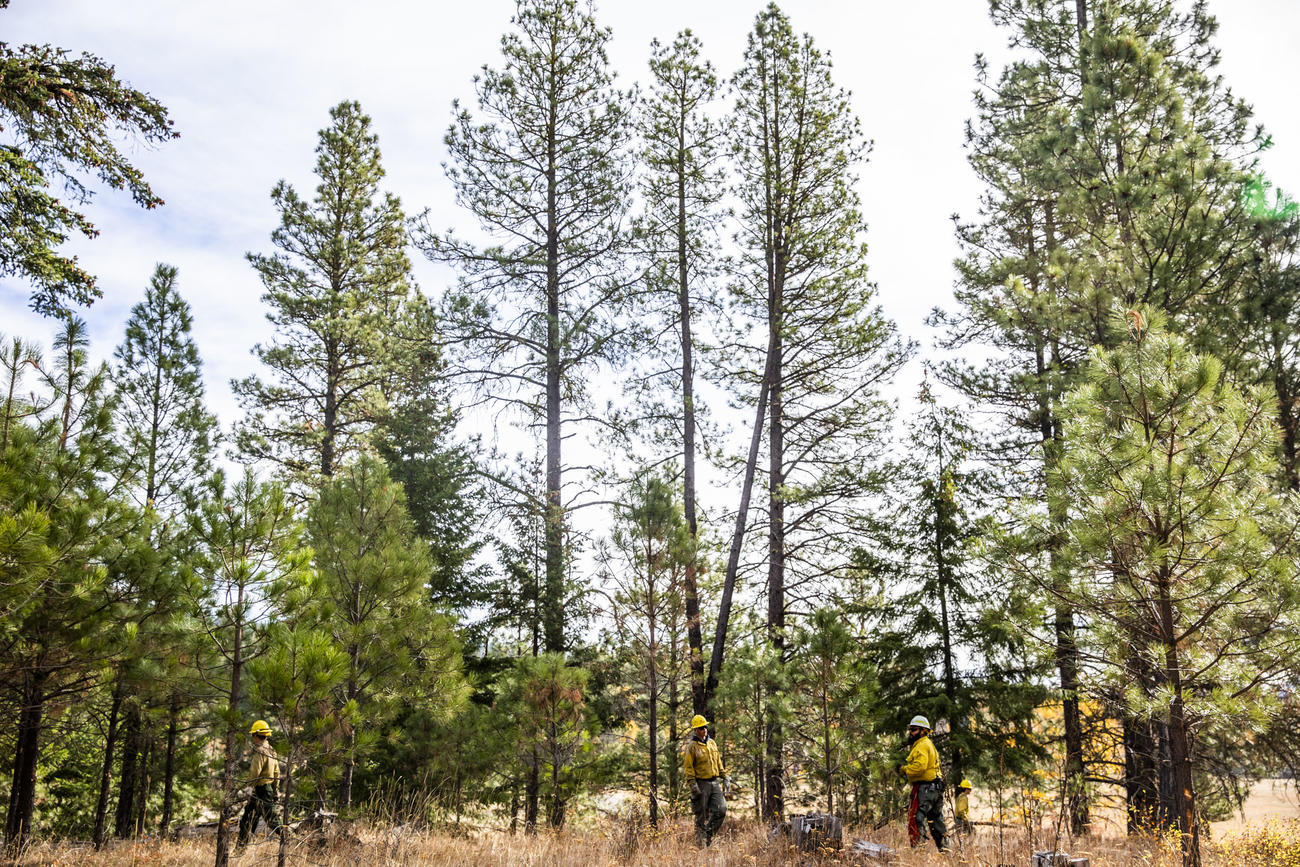 Crews work on thinning parts of the Teanaway Community Forest on Oct. 24, 2018, as a part of Public Lands Commissioner Hilary Franz's forest health treatment plan. The Department of Natural Resources is implementing the treatment plan which uses dying forest for cross laminated timber.

Crews work on thinning parts of the Teanaway Community Forest on Oct. 24, 2018, as a part of Public Lands Commissioner Hilary Franz's forest health treatment plan. The Department of Natural Resources is implementing the treatment plan which uses dying forest for cross laminated timber. 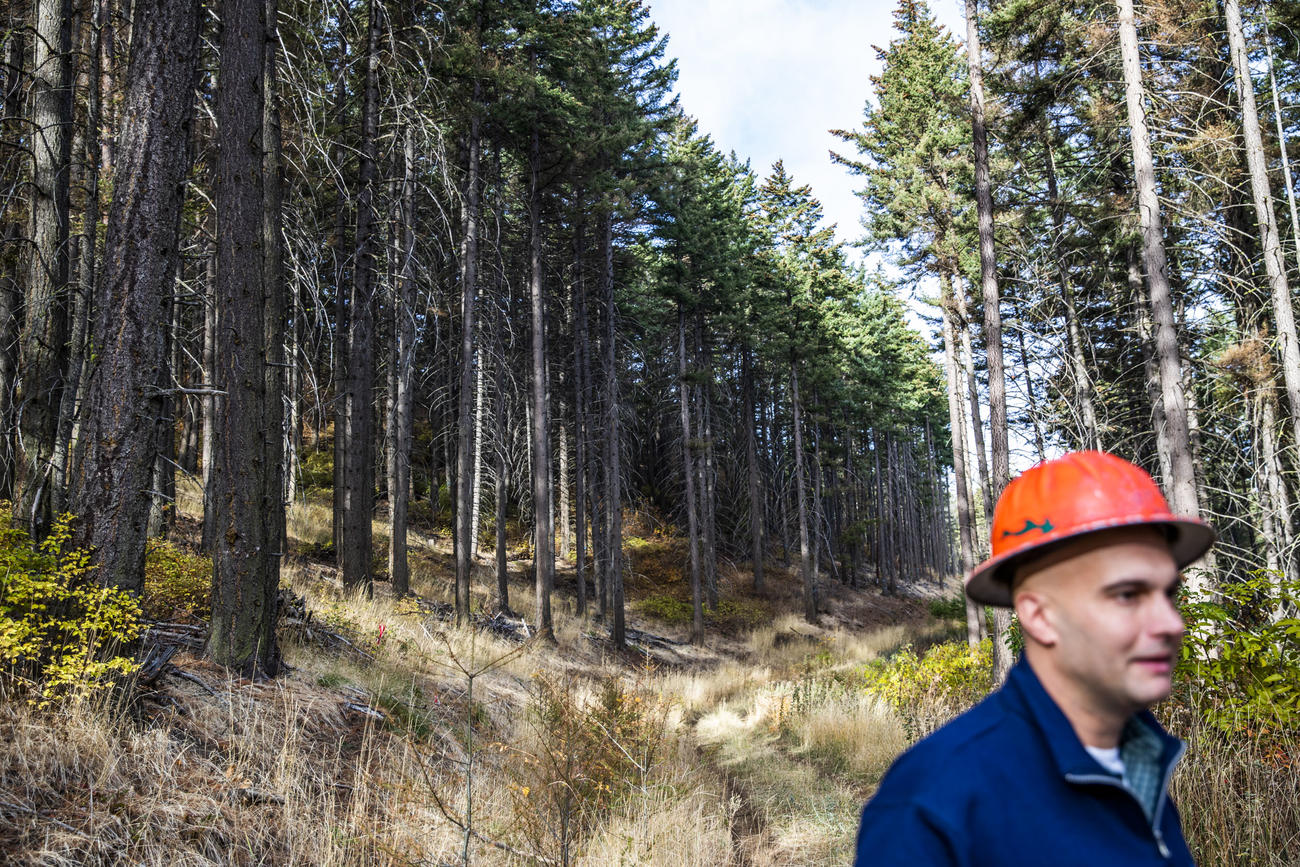 Larry Leach, assistant regional manager of state lands, discusses the Tussock moths that are attacking Douglas-firs in some of Washington's forests, which is part of what Public Lands Commissioner Hilary Franz hopes to combat with the Department of Natural Resources' forest health treatment plan.

Larry Leach, assistant regional manager of state lands, discusses the Tussock moths that are attacking Douglas-firs in some of Washington's forests, which is part of what Public Lands Commissioner Hilary Franz hopes to combat with the Department of Natural Resources' forest health treatment plan. 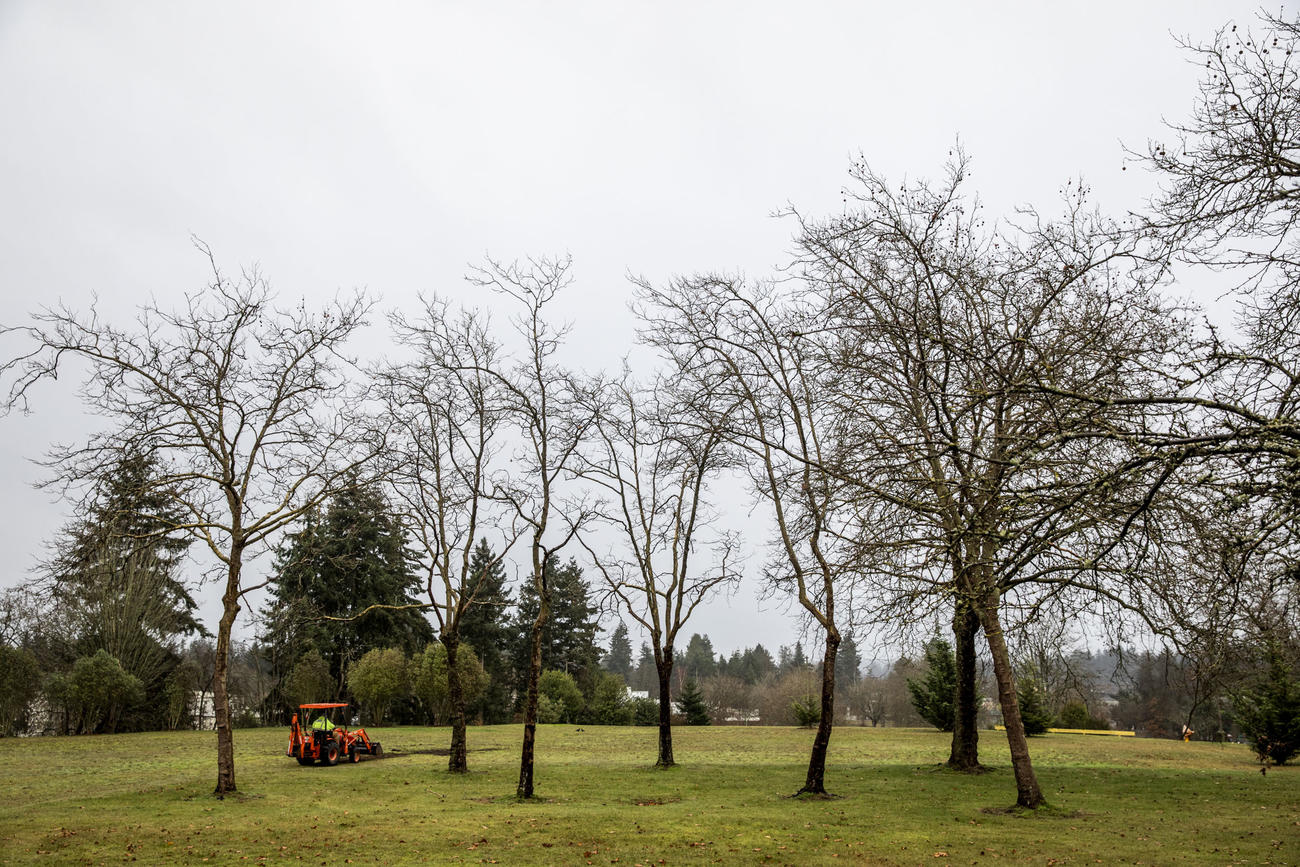 Department of Natural Resources property that is currently being leased to the Department of Social and Health Services  in Shoreline, Dec. 13, 2018.

Department of Natural Resources property that is currently being leased to the Department of Social and Health Services  in Shoreline, Dec. 13, 2018.

Franz is particularly excited about the potential of this strategy west of Cle Elum. To help what she calls “the biggest crisis in the I-5 corridor: affordable housing,” she considers a property portfolio of arguably underutilized DNR land. The agency owns land all over the state, including urban and suburban real estate in central Puget Sound that is adjacent to transportation hubs — highways, light rail, transit.

Much of that land is leased for commercial uses — and some to other state agencies — that generate millions in annual revenue. Many of the department’s commercial properties are occupied by low-rise retail buildings or warehouses — traditional suburban sprawl, including strip malls. There’s an office park on I-90 in Issaquah, Walgreens stores in Des Moines and Mukilteo, a shopping center in Tacoma, a Costco Business Center in Fife and office buildings in Bellevue and Bothell. Some of these properties could be ripe for high-rise, mixed-use redevelopment with the right zoning. They could produce much more revenue for the state; they also could host affordable housing built from mass timber products.

On another rainy day this winter we visited a very intriguing chunk of DNR property: 52 green acres in Shoreline, north of Seattle off I-5. This land now is part of a 92-acre campus that houses the Fircrest Residential Habilitation Center, run by state Social and Health Services Department. Fircrest staff works with about 200 people with “intellectual and developmental disabilities,” who live and learn in community. It was formerly a tuberculosis sanitarium. Some people and legislators have advocated for closing the facility, and DSHS is reportedly interested in downsizing its footprint. Could some of that parklike land — say a dozen acres — be rezoned and turned into affordable housing? The property’s location near the freeway, and with light rail on the way, suggests there is development potential. Still, there are opportunities in the region that would not impact a vulnerable populations such as those served at Fircrest. 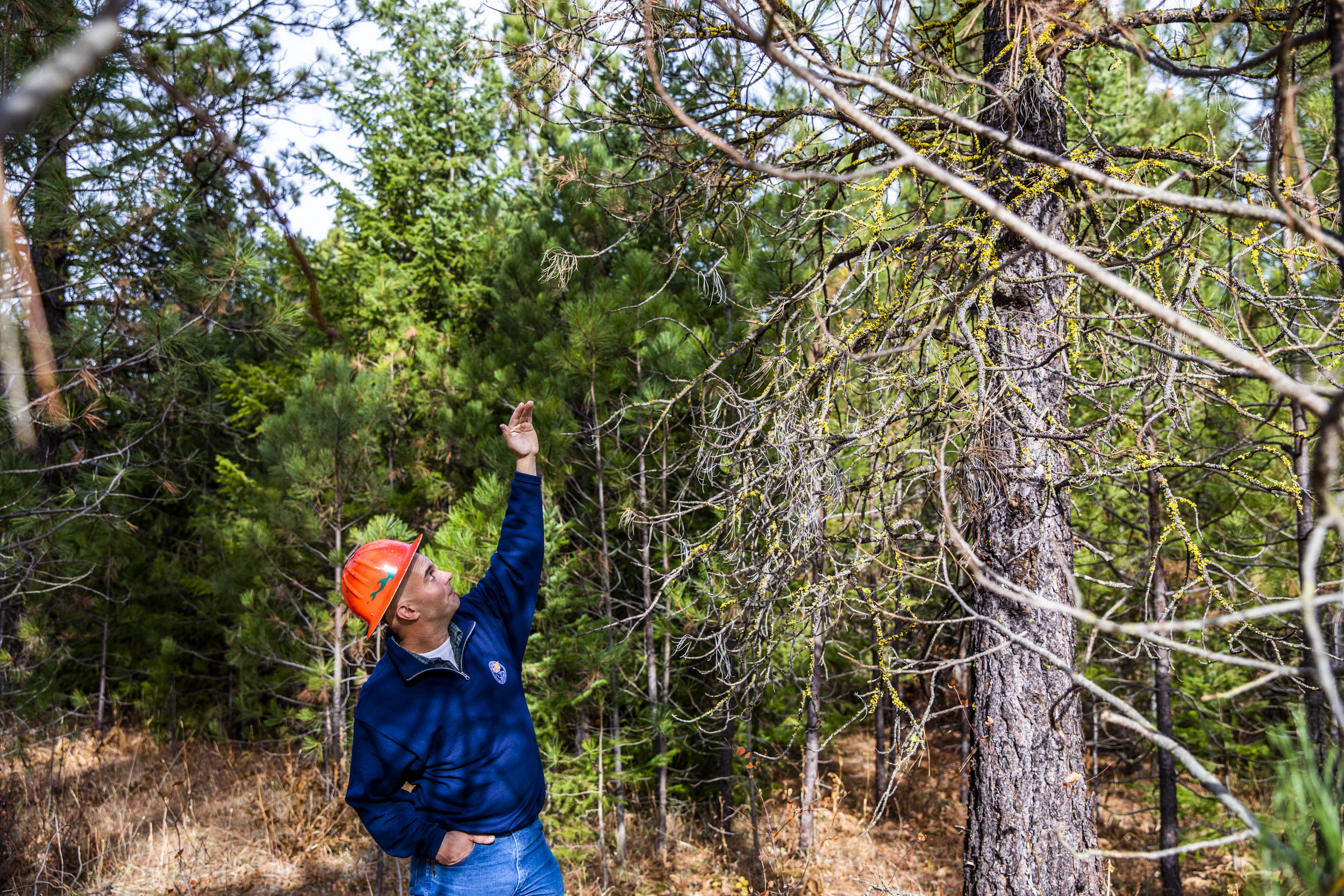 Franz proposes diversifying what amounts to a DNR investment portfolio that hasn’t been reviewed for a long time. “To me, it’s a no-brainer,” she says. The properties need to be seen and evaluated in light of the current and future urban landscape, she believes. What revenues could they potentially produce? What help can they offer to a growing region? How can they support the educational needs of Washington’s kids?

Franz likes to say that her plans for forest health, CLT, and urban development might create a “flywheel effect,” a self-propelling righteous circle of win-win-win for the environment, the state’s economy, and pressing needs in urban and rural areas for affordable housing.

Franz is acutely attentive to rural needs. She oversees a grant program, for example, that supports projects in southwest Washington. They range from a derelict vessel recycling center in Ilwaco to reviving a hard-woods mill in South Bend. In recent months there has been some buzz that Franz might be a potential candidate for governor, though lands commissioner is hardly thought to be a typical launching pad for such a campaign.

When I ask if she’s running, Franz gives me a disappointed look and says she doesn’t want such talk to distract from her day job. But she goes on to say she’s a believer in “one Washington,” and that the state needs someone who is not a professional politician, represents more diversity (other names commonly floated as possible gubernatorial candidates are men), and “will look for common ground.” She says we need to be prepared for the “environmental crisis in front of us.” Fighting wildfires puts Franz on the frontlines of that crisis. Like her flywheel dreams, she is moving at a mile-a-minute pace to assemble the pieces that will make her strategy work.

“We don’t have any more time to waste,” she says, before running off.