Could Seattle schools find a better way to make up snow days?

After numerous cancellations and with more snow in the forecast, area schools are weighing options to make up the days. 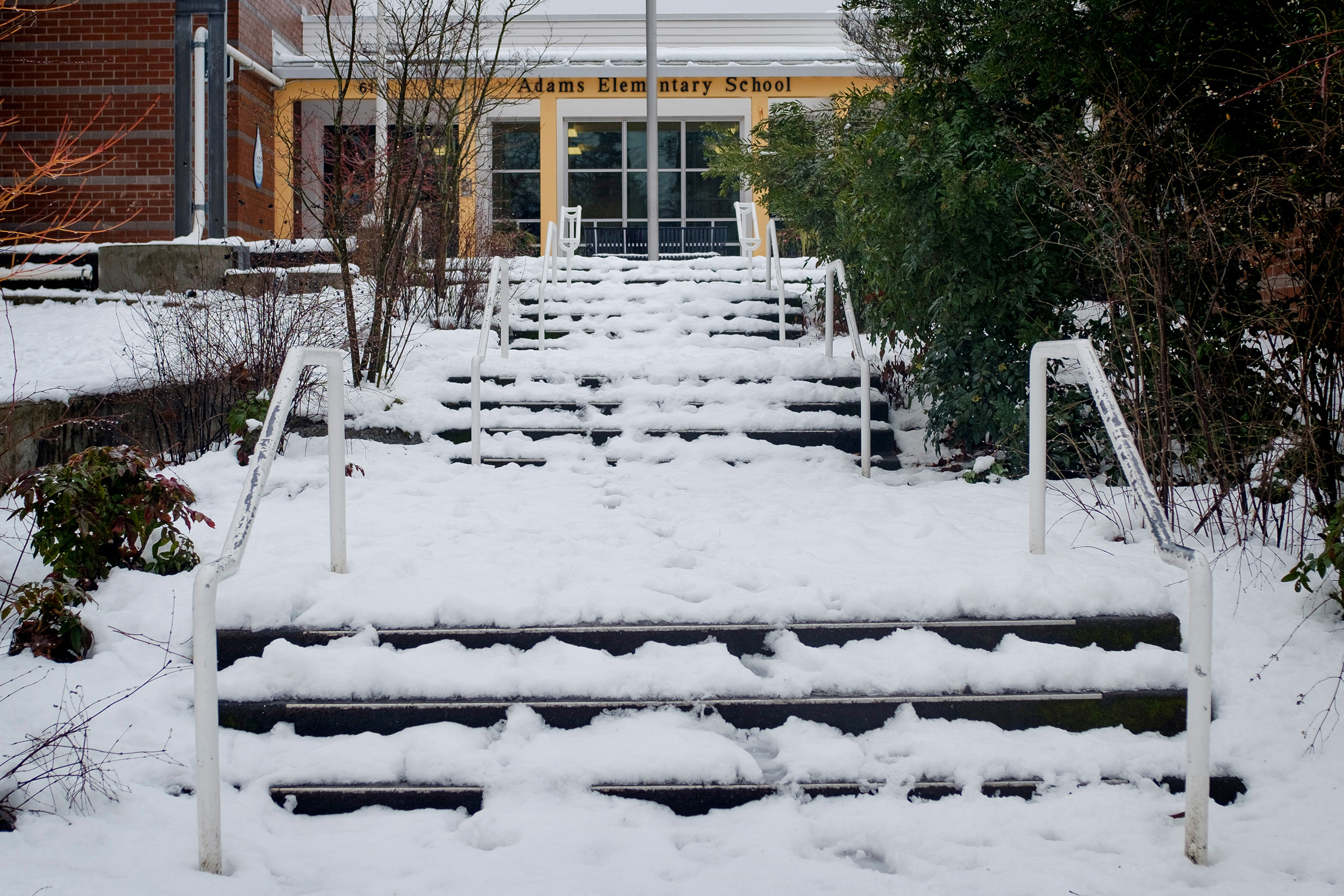 Snow covers the stairs at Adams Elementary in the Ballard neighborhood of Seattle on Feb. 12, 2019. The school was closed for a snow day. (Photos by Sarah Hoffman/Crosscut)

The unrelenting snowfall that has plagued the Puget Sound region this month has been bewildering even to a New Jersey native and former Colorado resident, Janine Chiorazzi-Pierce. The full-time art teacher resides in Pinehurst and has worked at B.F. Day Elementary School in Fremont for a decade. She can’t recall another time in her 18 years of living in Seattle when the city’s weather interfered so significantly with her day-to-day life.

She was not alone. The approximately 20 inches of snow that have fallen in the area since Feb. 3 brought the Seattle area to a standstill. Seattle City Light reported having as many as 24,382 customers without power early Tuesday morning, and businesses, government offices and schools across the region shut down. Seattle students returned to school Thursday after having five snow days in the past two weeks, while some outlying districts have yet to resume operations. The snowfall led Gov. Jay Inslee to declare a state of emergency late last week.

Chiorazzi-Pierce said her car was an unmovable fixture on her snowbound driveway for several days, and at one point she went without power and central heat for nearly 20 hours. To alleviate his cabin fever, her 14-year-old son, Damian, took to sledding and going on walks with friends around the neighborhood, while her third-grader, Stella, played with Legos and solved puzzles.

But despite her family finding ways to entertain themselves during the storm, Chiorazzi-Pierce said missing five days of school and work has been anything but a celebration. And now she faces the possibility of having to teach and send her children to school beyond June 20, the scheduled last day of school.

“There seems to be a misnomer that we're out here on vacation or something,” Chiorazzi-Pierce said. “We have work to do and want to get back to it as soon as possible. I don't think it’s fair for families and teachers to be penalized because of Mother Nature.”

The educator and mom is one of more than 6,000 members of the Seattle Education Association (SEA), the union representing Seattle public school teachers, paraprofessionals and administrators. She hopes the union will work out a deal with Seattle schools that doesn’t involve tacking on extra school days during the summer months or changing graduation dates, which could cut into vacations and other activities families already have planned.

Under the union’s current collective bargaining agreement, June 21 and 24 are reserved as tentative make-up days. But no decisions have been reached regarding whether those days will actually be used.

Seattle Public Schools representatives say the district’s board will hold off on making any definitive plans before the end of the state of emergency, which is currently scheduled for midnight Feb. 20. But the district tweeted on Tuesday that Seattle schools will not schedule any make-up days during next week’s midwinter break, citing the short notice it would entail. The district would not comment on whether spring break is being considered as an alternative, but said that it is “exploring all options.”

Meanwhile, Chris Reykdal, state superintendent of public instruction, issued a statement Tuesday affirming that districts across the area can apply to waive days missed during the official state of emergency.

However, Seattle Public Schools and several other districts underwent two days of snow-related closures prior to Inslee’s initial declaration. And despite the option to waive days missed during a state of emergency, state law still requires schools to offer a minimum of 1,027 instructional hours, varying based on grade level.

Consequently, districts typically leave themselves wiggle room by implementing a daily schedule that can accommodate two or three school closures without dipping below the state-mandated hours. Moreover, many local school districts have instituted early release days, which they may opt to eliminate to help meet hourly requirements.

But with more snow in the forecast for the end of next week and students in districts like Kent and Northshore still missing days, concerns persist over how students will make them up.

SEA president Phyllis Campano expects Seattle schools ultimately to make up at least some of the snow days, but the union leader opposes the idea of making them up during spring break, when she said many families and community-based organizations have already worked out childcare plans. She also expresses doubt that students and faculty would be asked to come in any later than June, when the district’s academic year is slated to end. Negotiations, however, are ongoing.

“We want to find a solution that is equitable for everyone involved,” said Campano. “We’re trying to think through any unintentional consequences of any decisions that are made.”

Chiorazzi-Pierce reckons Seattle schools could take note from districts in other states, which have found more creative ways to lessen the impact of make-up days.

The Houston Independent School District, the largest public school district in Texas, lost nine days during the 2017-2018 academic year because of Hurricane Harvey,  but ultimately decided against adding make-up days to its calendar, according to KHOU11. Instead, the district added between 10 and 20 minutes to the end of its school days to make up for lost instructional hours.

Districts in several states, including New Jersey and Minnesota — and even those with infrequent snowfall, like South Carolina and Georgia — have implemented virtual school days to replace traditional snow days. This way, students can still receive classroom instruction remotely.

In addition to more immediate concerns, questions exist surrounding whether the region’s schools should be preparing for more of these snow events — especially given the recent onslaught of arctic weather around the country. Local climate expert Amy Snover asserts that long-term changes to the Pacific Northwest’s weather patterns are imminent, but maintains that the recent snowfall isn’t as much of a bad omen as it may seem.

“Experts are telling us that these sort of long snowy periods we've had are very unusual for Seattle, but it does happen every couple of decades or so,” said Snover, who directs the University of Washington’s Climate Impacts Group. “So it's a background risk that I think people are seeing is important to prepare for."

The city was blanketed by a whopping 21.5 inches of snow in a single day on Feb. 2, 1916, and more than 67 inches of snow fell during the winter spanning 1968 and 1969, according to the Seattle Weather Blog. More recently, Seattle saw the most snow it’s seen in at least 20 years in December 2008, causing Seattle schools to close for three days. The district made up each of the snow days in mid-June.