Could this tool save Washington's shellfish?

Washington’s waters are under threat from a villain you can’t see. This computer model is giving oyster farmers a lifeline as they seek to adapt to one of the biggest marine crises of our era. 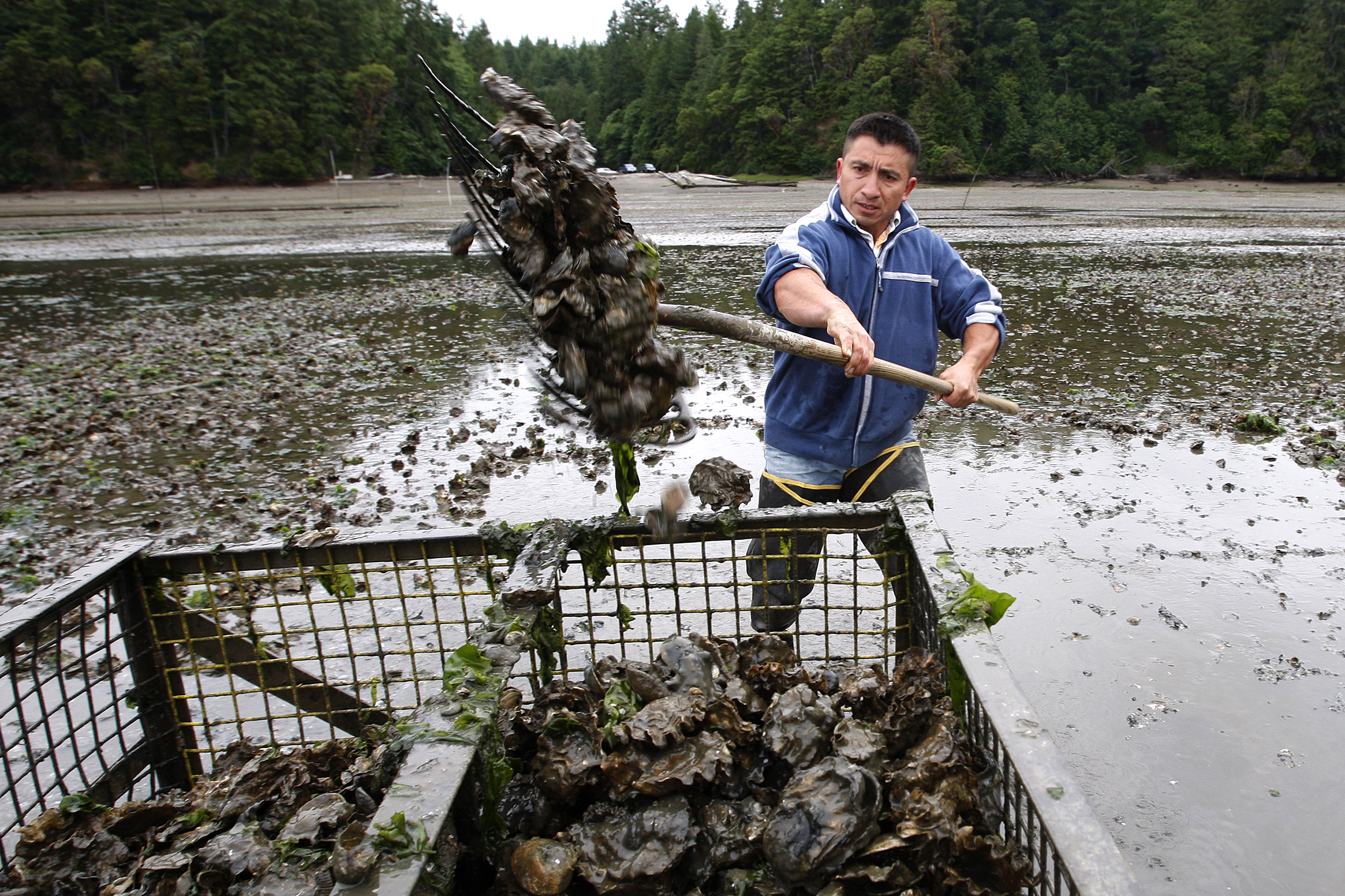 In this 2010 file photograph, Efrain Rivera uses a pitchfork to harvest Pacific oysters at low tide at a farm owned by Taylor Shellfish Co. in Oyster Bay, near Olympia. (Photo by Ted S. Warren/AP)

Washington is home to thousands of marine species. Salmon, crabs and bivalve shellfish like oysters and clams fuel both the aquatic food chain and human fisheries — and they thrive under stable levels of acidity, salinity and other marine growing conditions.

But over the past few decades, climate change has acidified the world’s oceans at an unprecedented rate, threatening the biodiversity that defines our region and supports these fisheries. As the concentration of carbon dioxide in our atmosphere increases, the ocean dissolves more of it at the surface — producing conditions in Puget Sound and beyond that exacerbate shell deformation, promote toxic algal blooms and create other hurdles to healthy waters. According to the Washington State Blue Ribbon Panel on Ocean Acidification, 30 percent of Washington’s marine species are in danger from it.

Ultimately, stopping ocean acidification requires unprecedented international mobilization to reduce greenhouse gases. But if scientists and others could predict the complex undersea interactions that enable its worst effects, they could pull the trigger on short-term, local solutions that might help people and wildlife work around them. Researchers at the University of Washington have invented a computer model to do just that. Each day, LiveOcean compiles a vast array of ecosystemic data — currents, salinity, temperature, chemical concentrations, organic particles and more — to create a three-dimensional, 72-hour forecast for the undersea weather of the Pacific Northwest.

This is a particularly welcome tool for the state’s $270 million shellfish industry, which produces more farmed bivalves than the next two most productive states combined, according to the U.S. Department of Agriculture.

On the shores of Puget Sound, carbon emissions, excessive nutrient runoff and warming temperatures have made waters that used to be ideal for shellfish farming less dependable, resulting in catastrophic die-offs of oyster larvae in the late 2000s. According to the University of Washington’s Washington Ocean Acidification Center (WOAC), Willapa Bay hasn’t produced any natural oysters for the majority of the past decade, forcing shellfish farmers to purchase “seeds” from hatcheries.

“We know that the seawater chemistry conditions are different now than in the preindustrial era — we see pteropods with pitting and holes in their shells that are due to corrosive seawater conditions,” WOAC Co-Director Dr. Jan Newton said by email. “The CO2 increase is largely (~90%) due to emissions from fossil fuel combustion.”

But with help from LiveOcean, aquaculture has a shot at adapting farming schedules to the ebbs and flows of mercurial ocean chemistry before more permanent solutions are in place. The state-commissioned model is designed to forecast ocean-circulation patterns and underwater environmental conditions up to three days out. Eventually, it could help everyone in the region get a better understanding of how a changing climate impacts a major source of food, funds, fun and regional pride.

Designed by 10 researchers over the course of 15 years, LiveOcean is finally available to Pacific Northwest shellfish farmers (and the public at large) ahead of the 2019 spring oyster spawning season. LiveOcean was pursued in earnest after Gov. Jay Inslee’s 2012 Blue Ribbon Panel on Ocean Acidification recommended the state “establish the ability to make short-term forecasts of corrosive conditions for application to shellfish hatcheries, growing areas and other areas of concern.” The panel created WOAC and allocated $325,000 toward LiveOcean, which is also funded by the National Science Foundation and the National Oceanic and Atmospheric Administration..

Understanding how water moves is essential to predicting where and when instances of high acidification will be most damaging to shellfish farms, beachgoers and more. The ocean always circulates: The currents scoop up surface water, pull it into the depths of the ocean, then dredge it upward in what LiveOcean lead researcher Parker MacCready calls “underwater rivers.” These cycles circulate water over the course of decades. When water “upwells” back to the surface, carrying nutrients and dissolved carbon dioxide, it’s been out of sight for 30 to 50 years. “It is the biggest thing controlling water properties in the Salish Sea,” MacCready says.

These days, the “river” is returning with more nutrients and carbon dioxide — reflections of increased fossil fuel use, agriculture and other human activities during the 1970s. Because we know atmospheric carbon dioxide has increased since then, scientists say we can expect to see even worse ocean acidification in the future. And the interaction between human fossil fuel output and agricultural runoff with Puget Sound’s natural geography can make things worse.

“Relative to other coastal regions, Puget Sound is somewhat different in its expression of acidification,” Newton says. “Warming can be intensified or prolonged due to Puget Sound’s retentive nature.”

A system as dynamic as Puget Sound needs dynamic monitoring, and that’s where LiveOcean comes in.

“[LiveOcean] models circulation — currents and mixing — and, at the same time, all the things that are moved with the currents: salt, heat, oxygen, nitrate, phytoplankton, zooplankton, detritus, and carbon variables like dissolved inorganic carbon [DIC, like CO2)] and alkalinity,” MacCready says. “You need to have a really big computer, and deep knowledge of many ocean processes — like physics, chemistry and biology.”

LiveOcean draws on lots of types of data. It sources real-time river-flow information from the U.S. Geological Survey and Environment Canada and three forecasts for conditions in rivers, the ocean and surface and atmosphere.

LiveOcean isn’t the only model for underwater forecasts in the Puget Sound and greater Salish Sea region, but it’s unique in significant ways. LiveOcean is the only one that publicly forecasts oxygen concentration (which decreases as acidity increases, putting animals at risk of hypoxia), pH (the primary measurement of acidity), and aragonite (the most important mineral used by oysters to build their shells, and which decreases with acidity). Acidicified water corrodes and sometimes dissolves protective shells, forcing shellfish to expend extra energy on basic life functions.

Equipped with this data, LiveOcean can be used to predict where acidified water will move throughout the coastal ocean, estuaries, the Salish Sea and ultimately 45 rivers. Shellfish growers can then ideally use that information to determine when and where they should release sensitive larvae, which spend their first few days of life developing shells and essential organs. To ensure shellfish larvae survive through their first two days of life, aquaculture managers release larvae during peak levels of photosynthesis and aragonite. When adults have to battle corrosion to keep growing, they’re not putting energy into reproducing.

“We are still working on the best way to get that to shellfish growers in a meaningful way. [Like how] some clever app developer distills all the terabytes of a weather simulation into a few useful sun and cloud icons on your phone,” MacCready says. “We are not there yet, but that is a key task for this spring.”

“Where [forecasting] remains critical is for those in the industry who have what we refer to as remote setting stations,” Dewey says.

Setting stations — land-based tanks filled with mesh bags of oyster shells and heated seawater — are where oyster larvae start their lives. Operators place the free-swimming, hatchery-hatched larvae in the tanks, where they “set” by attaching themselves to discarded oyster shells and making them their own.

“They are vulnerable to all sorts of stresses as they make this difficult transition, including bad water chemistry,” he says. “These operations don’t typically have water chemistry monitoring and treatment capacity, to where LiveOcean predictions could help them ensure they are setting under optimal conditions.”

LiveOcean is also the only ocean model that forecasts for microscopic plantlike organisms called phytoplankton, which shellfish eat. Phytoplankon are the essential first link of most marine food chains: the more phytoplankton, the more organic matter in the ocean. However, this can lead to increases in algae blooms, which cover the ocean’s surface and limit oxygen and sunlight. When the blooms die, they create dead zones and add to the ocean’s mounting CO2 reserves.

While LiveOcean was developed with the shellfish industry in mind, its ability to predict water movement throughout Puget Sound makes it useful for other applications.

LiveOcean’s forecasts also feed into tailored apps meant for tuna fishermen, boaters, beachgoers and more. It also models historical ocean events, which helps researchers make projections for how animals and substances travel through the ocean. Elizabeth Brasseale, a UW graduate student in oceanography, used LiveOcean to explore the origin of invasive green crabs that began infesting the West Coast in the late ’80s. Knowing where the crabs come from will inform attempts to eradicate them.

“Their range has been expanding, but in all that time they haven't entered the Puget Sound,” Brasseale says. Using LiveOcean, she was able to see how the Salish Sea’s current patterns act like a force field keeping the invasive larvae out.

Some green crabs snuck into Puget Sound between 2014 and 2016, when an intermittent patch of warm water called “the Blob” appeared, mystifying oceanographers. Data from LiveOcean uncovered the conditions that allowed the infestation, and it can predict when and where it might happen again.

LiveOcean’s potential for creating new and  extended applications is only just beginning to be explored.  Recently, parasitic burrowing shrimp have infested Pacific Northwest oyster farms. They’re usually held at bay by fresh water, and that got Dewey to thinking about how LiveOcean could investigate the problem.

“Some speculate that damming the Columbia has contributed to the proliferation of the shrimp, so there are no more floods and major freshwater events in the bays to kill the shrimp,” he says. “Perhaps with LiveOcean and knowledge of the shrimps’ life cycle, freshwater releases from the dams could be done to both benefit salmon and control shrimp.”

As more people apply the tool in different ways, a better picture of ocean dynamics will inform how humans adapt to it in the Pacific Northwest.

“[We’re developing] the ability to see seawater conditions and how they change in time and space. It is exciting that the applications are so numerous,” Newton says, noting oil spill tracking potential. “We gain very basic information on how Puget Sound functions. This tool opens doors to many new avenues of research and understanding.”