Farmers, skiers, salmon rejoice! The snowpack is back

February's record-breaking snow and cold are good news for water users all over the state. 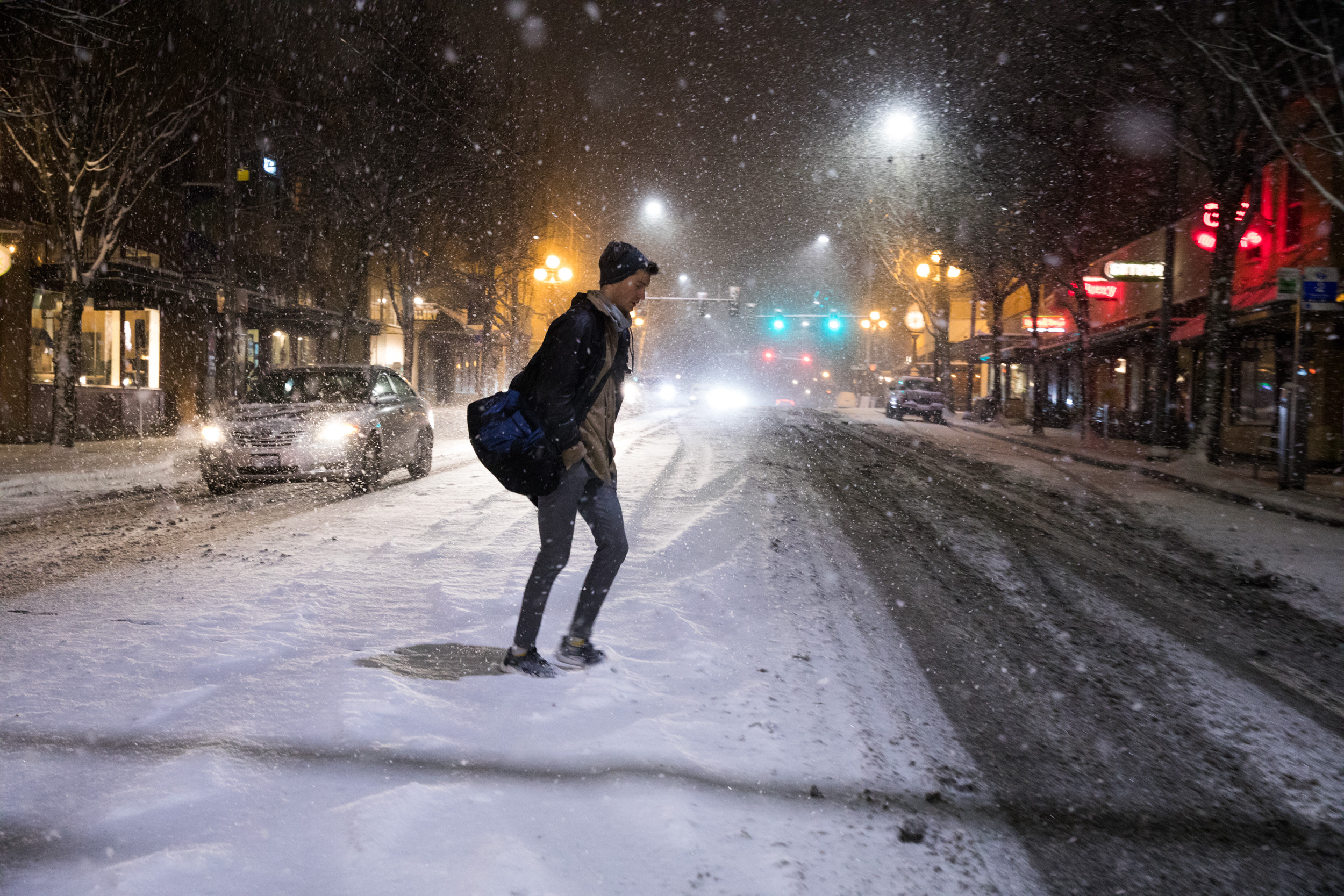 A man crosses Rainier Avenue during the early morning hours of a snowy day in Seattle, Feb. 4, 2019. (Photo by Matt M. McKnight/Crosscut)

Usually, Washington’s calendar for snowpack looks like this: Heavy snow in the Cascades starts in December and peaks in January, dwindling through the following months. By April, most scientists watching the weather expect snowpack to reach its annual peak. For Seattle, this typically translates into a day or two with an inch or so of wet slop that disappears within 48 hours.

But with slushy roads and ice still lingering in Seattle after more than a week of heavy snowfall, it’s obvious this year is an exception. An unprecedented total of 14.1 inches of snow shattered February records for Seattle proper, and SeaTac’s 20.2-inch snowfall makes February the fourth snowiest month ever on record. SeaTac is also on track to record the coldest February in history.

All of this has profound implications for the snowpack that feeds forests, rivers and farms throughout the rest of the year. Cliff Mass, an atmospheric sciences professor at the University of Washington, writes that most predictions suggest “a very cold pattern remaining in place” for the rest of the month. Colder temperatures will lock that snowpack in for water use the rest of the year.

“That snowpack is not going anywhere,” Mass says. Snowpack levels all over the greater Northwest have jumped as a result. On Feb. 13, Snoqualmie Pass set a 24-hour snowfall record of 31.5 inches — the most since 1973. Mass notes that even drought-plagued northern California is now at 100 percent of its snowpack level for the year.

This extra snowfall is particularly good news for areas in Washington like the Yakima Basin, which relies heavily on the water that snow brings for irrigation. Extra snowpack bodes well for water supplies in the state and helps protect dependent areas from shortages.The snow also provides a buffer for agricultural areas in Eastern Washington that hold junior water rights: They are first to get rationed during shortages or droughts. When spring comes, melting snow also boosts supplies for drinking water and fish habitats, among other things.

These past few years, Washington has seen what Jeff Marti, drought coordinator at the Department of Ecology, calls “mediocre” levels of statewide snowpack — years in which snowfall fails to reach the normal average total.

In 2015, snowpack fell to a dangerous low of 24 percent, resulting in the state’s last drought declaration. In 2018, Marti says there was some risk preparation for potential drought, but late-breaking precipitation saved his department from cutting back on the water supply of junior-rights holders. Just last month, levels of snowpack were at 74 percent — the seventh-lowest season of snowpack at that point in the past three decades, continuing the downward trend of previous years.

But after the recent snowfall, Marti says that changed.

"Going into last week, we were having a pretty mediocre snowpack,” Marti says. “And then this last week happened and as of [Feb. 14], our state average snowpack is now at 89 percent of normal. That's an extraordinary leap in the space of a week.”

Marti says the tardiness of this snowfall is what’s unusual. By February, most expect the door for extra snowpack to be closing, but that wasn’t the case for this year.

“We kind of like to get to normal by early April,” he says. “So when you get into February, the days are generally getting warmer, they're certainly getting longer, so the odds of getting significant snowpack start turning against you and that door starts closing. The fact that we had this big snowpack event, I would say is pretty unusual. But it has happened before.”

“The lowland snow and how long the cold lasted is unusual,” she says, pointing out Seattle as an example. “Usually, snow in the lowlands maybe sticks around for a day or two. Knowing we had the cold air in place for over a week and several different snow events was highly unusual.”

Two weeks ago, it had been a mild winter. Then this happened. #wawx pic.twitter.com/nTEfjgBUhH

Even though there are vague predictions for snowfall this week, Bumbaco says El Niño activity should dampen expectations for more snow this month.

“We're in a much better position in terms of mountain snow, especially in some of the key basins that we look at,” Bumbaco says. “But still, looking at what the climate prediction center is forecasting for the rest of winter, in the next week or so [it should] turn back to warmer than normal temperatures and drier than usual conditions.”

Mass says he sees suggestions that there could be potential snow next Wednesday, but he says he wouldn’t bet on it: He notes predictions this far out that aren’t dependable and likely to change. He also says he expects to see another unusual snow event like this in Washington’s long-term future.