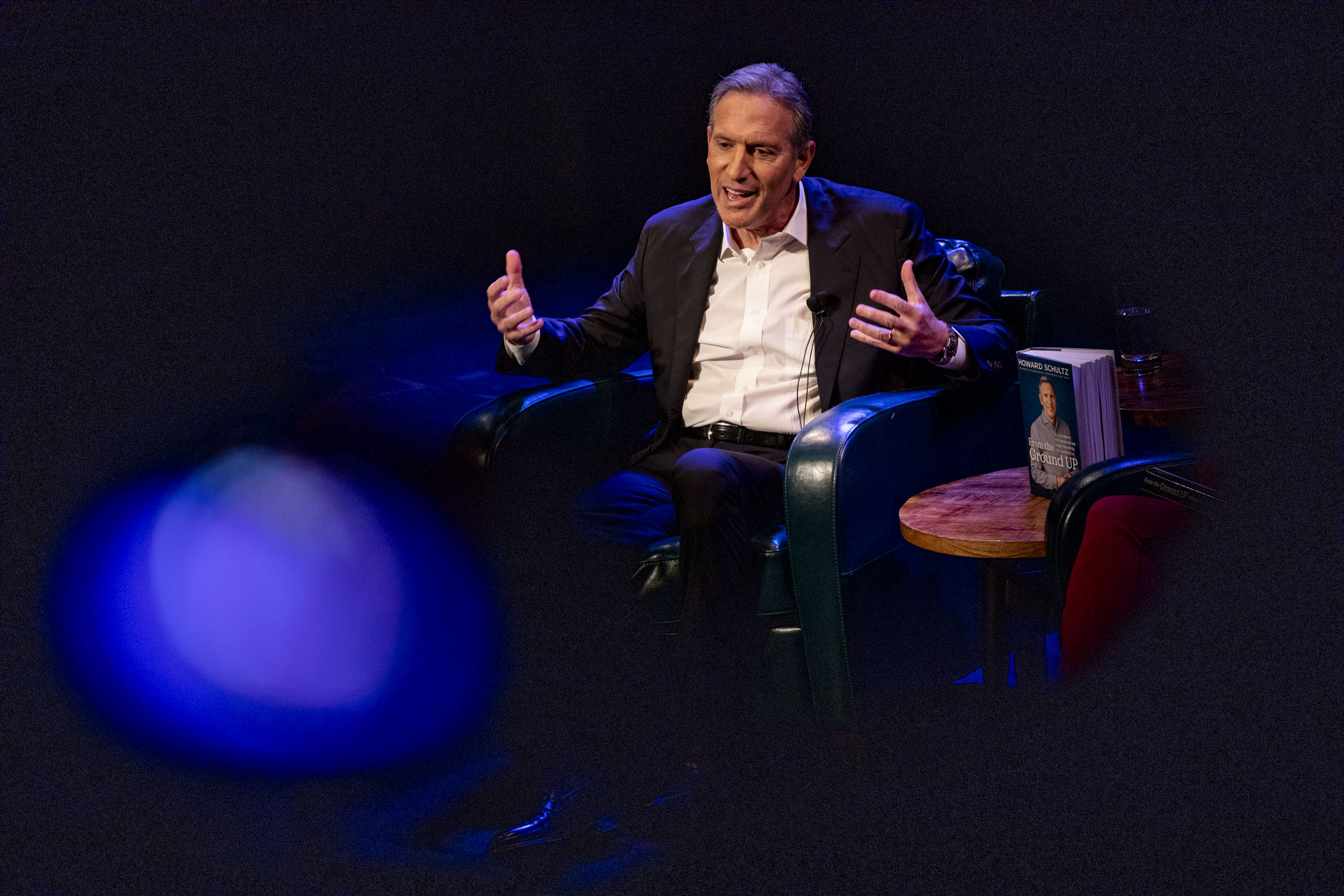 Former CEO and Chairman of Starbucks Howard Shultz addresses the audience on stage during his From the Ground Up book tour at the Moore Theatre in Seattle on Thursday, Jan. 31, 2019. (Photo by Dorothy Edwards/Crosscut)

Starbucks billionaire Howard Schultz brought his possible presidential campaign to the historic Moore Theater in Seattle Thursday, facing a hometown crowd of friendly faces inside and protesters in Sonics green with long memories on the street.

The Moore has featured live acts on its stage during its long history, including the Marx Brothers and Houdini, and there was both a little farce and some magical thinking in Schultz’s appearance.

Schultz is ostensibly on a book tour promoting his new memoir, From the Ground Up. He rented the Moore and picked his on-stage interviewer, Monica Guzman of The Evergrey, for a conversation about his up-from Brooklyn biography.

But in the five days since his tour’s official launch with an interview on CBS’ 60 Minutes, the book has been largely forgotten amid criticism of his seriously pondering a run for president in 2020 as a “centrist independent.” He’s taken much fire from the commentariat and social media, suggesting this is a narcissistic effort that could result in the one thing Schultz says he does not want, the re-election of President Donald Trump. As he said from the stage, “I’m not trying to win the Twitter primary — it’s safe to say I have lost that.”

On the positive side, the audience was largely polite — no one shouted “asshole” as someone did in New York. And to be fair, Schultz is trying to make a case both for civility and centrism — or at least asking for a fair hearing. The former lifelong Democrat argues that we are at a uniquely bad moment in time with a two-party system engaged in gridlock and the nastiness of what he called “revenge politics.”

Schultz paints himself as a patriotic leader looking to march America in a different direction where partisanship is past and problem-solving flowers under his wise leadership. Few people, in his audience or anywhere in America, would argue that this current time in our politics was the best of all possible worlds. Schultz, for his part, wants a civic life where it’s “country over party,” and “citizenship over partisanship.” He fears the nation is at a “fragile level of divisiveness.” 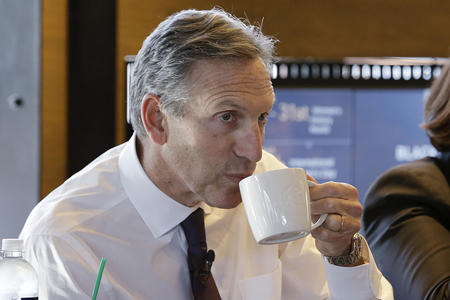 Schultz insists that he has not made up his mind about running for president, but he uses arguments that are awfully familiar to those who have observed independent or third-party campaigns in the past: This is a special moment in time, a crisis is upon us, breaking the current two-party system is the answer. Such themes have threaded through the campaigns and across the ideologies: Ralph Nader, Ross Perot, John Anderson, Jill Stein, Teddy Roosevelt. If the times are unique, the justifications are not.

Schultz’s main case seems to be that both parties are equally at fault — and that as a lifelong Democrat, he is worried about his former party’s drift to the far left. His case is full of both-sides-isms. Where Trump argued that there were “good people” on both sides in Charlottesville, Schultz’s argument runs that both parties are equally at fault. Still, he considers that Trump’s re-election would be a disaster. He repeatedly said that he would not play spoiler and cause that to happen, yet, when pressed by Guzman, he wouldn’t identify what might change his mind. He indicated a final decision about a run in “spring or summer.”

Schultz’s main attack line on Democrats is that they are unrealistic about social programs. He says they are going too far left because some candidates propose Medicare for all, free college tuition and government jobs for everyone. Yet the Democratic Party took back the U.S. House of Representatives last fall with a big tent that included very liberal and more centrist candidates. Schultz also admitted that he voted for Jenny Durkan, a Democrat, in what was, for him, a rare act of voting in a municipal election.

Still, he is clearly rankled by some progressives. Earlier in the week he called out U.S. Rep. Alexandra Ocasio-Cortez as being “un-American” for criticizing a system that creates billionaires like Schultz while people lack healthcare. For a guy who doesn’t like name-calling, that’s a pretty nasty thing to say, “un-American.” It was Ben Franklin who proposed a cap on wealth — was that un-American? Bashing the rich is as American as apple pie.

Schultz seems a bit thin-skinned on criticism of his wealth. He takes it personally. Schultz believes that his story — a Jewish boy from Brooklyn who grew up poor in public housing to become a wealthy businessman with Starbucks stores in 77 countries — is the personification of the American dream. And he’s understandably proud of the distance and the road he’s traveled.

He believes that Starbucks is a model of good corporate behavior: He’s proud his baristas have health insurance, free tuition and stock ownership. He’d like to do something similar for America, but with the cooperation, he says, of government, private industry and people, like himself, who have made a lot of money. He believes in noblesse oblige more than capitalistic reform.

Hot-button local questions for Schultz stemmed from his selling the Sonics to out-of-town owners, who quickly absconded to Oklahoma City, breaking sports hearts here in Seattle. Folks who covered the Sonics during the Schultz years seem especially negative about Schultz, and so too the fanboys who carry a deep sense of betrayal. Outside the Moore, they passed out copies of the Sonicsgate DVD for free to educate newcomers on the outrage and betrayal of hoop dreams.

But Schultz, who apologized in the book for the sale and admitted it was a mistake, spent less time apologizing and more time trying to explain that he wasn’t really the majority owner and that he did everything humanely possible to keep the team locally. It came off as, “there’s no excuse but here’s my excuse,” a common defense in sports when someone has screwed up.

When Guzman asked about his voting record — Schultz has voted in only 11 or 38 elections since the early 2000s — his defense was even lamer. Especially for a guy who touts community involvement. He travels a lot, he said, and he defended his voting record by saying he’d voted in every presidential election since he was 18. “I did everything I could to move the country forward on the national level.” Not so much for local levies, school, state and city races, though. In fact, there’s this: Schultz’s city council member is Kshama Sawant, a Socialist Alternative party member. You get the government you deserve if you don’t always vote, right?

Schultz asks that people not prejudge his exploratory efforts. While the instant pundit reaction has been that his candidacy would help Trump, others believe the outcome is less predictable. Chris Vance, the former state Republican Party chair who is now an independent, thinks 2020 is likely to be a wild ride with possible impeachment, the unpredictability of Trump. “Schultz running doesn’t happen in a vacuum,” he says.

Schultz concurs. “We don’t know what’s going to happen,” he said near the end of his appearance. “Don’t rush to judgment — it’s only been a few days!”

Others are more skeptical. Gordon Bowker, a Starbucks co-founder, says he’s not enthusiastic about a Schultz run, though you can’t discount his salesmanship. Still, Bowker says of the former CEO, “He’s just another two-bit billionaire looking for love in all the wrong places.”