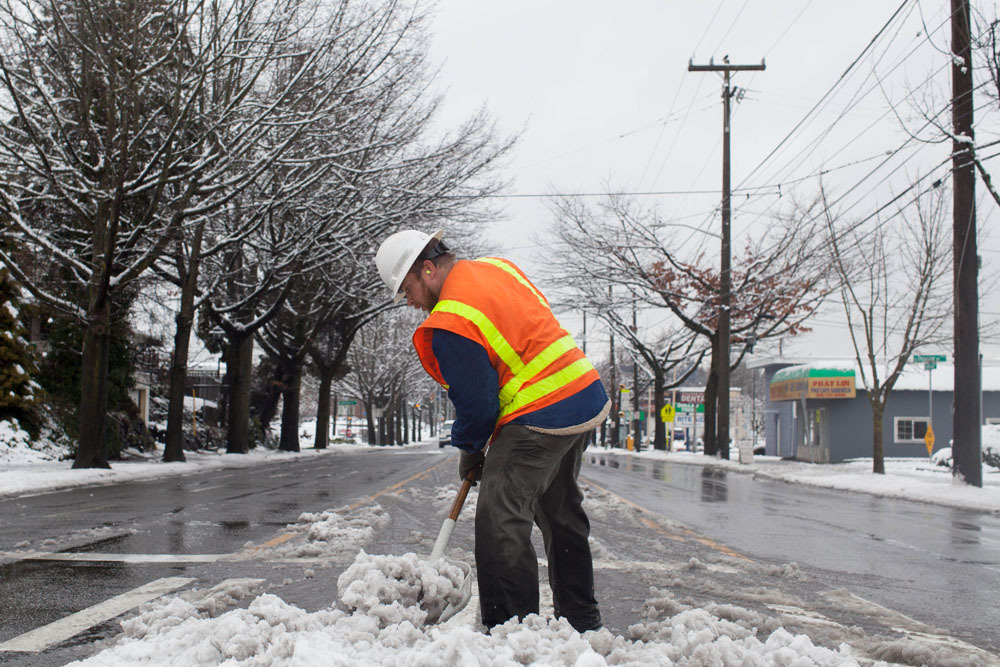 Seattle is not very good at dealing with snow. Sure, it took the city only a day to get its main roads clear for driving after Monday’s storm, and a few days later, downtown sidewalks were in pretty good shape. But five days after the last storm, with a new round of snow bearing down on the Puget Sound region, the sidewalks and side streets in many Seattle neighborhoods remain icy, treacherous messes.

It’s a dangerous situation for pedestrians, who risk slipping on ice or sharing the streets with cars as they carry on with their daily lives. But for people with disabilities, such as mobility issues or visual impairment, snow and ice on sidewalks and streets can pose a formidable challenge — sometimes to the point that the city becomes unnavigable.

Vanessa Link is a power-wheelchair user who grew up on Whidbey Island. Rather than chancing the hazardous icy conditions in Seattle and around the University of Washington campus where she’s a student, she’s stayed with her parents on Whidbey, waiting for conditions to improve.

“It’s not worth trying to brave it,” said Link, a production assistant at Rooted in Rights, a Seattle-based media company that produces disability rights advocacy content. “If a sidewalk is icy and I’m driving in my power chair and I hit a patch of ice, I could very easily veer off the curb into the street or into a ditch or turn over in my chair. There’s a whole list of horrible things that could happen.”

Steve Lewis, board president of Alliance of People with disAbillities, also chose to wait before heading out. He went downtown Thursday with his manual wheelchair and found mostly clear, dry sidewalks. It was his first time out since Monday’s storm. “Many people with disabilities will stay home, but then everybody will stay home pretty much,” Lewis said. “I worry about people with disabilities who have jobs to get to and can’t telecommute and need to be out in the weather.”

Even when city workers or residents get around to clearing sidewalks, those efforts often don’t account for the specific needs of those with impaired mobility. Clark Matthews, Rooted in Rights’ lead producer and a manual chair user, turns to driving at times like this.

“Frankly when it’s snowy and icy, I’m better off just driving as much as I can and avoiding it,” he said. “Even when streets do get plowed, they often don’t dig out curb ramps. Residents don’t bother to shovel their sidewalks any wider than their 12-inch-wide shovel, which doesn’t really work for those of us who can’t tiptoe through the snow banks.”

The fact that uncleared sidewalks and streets pose such a barrier for some people goes well beyond inconvenience to Matthews.

“The [Americans with Disabilities Act] standards don’t just apply when the weather’s nice, and the ADA guidelines aren’t just niceties,” said Matthews. “The ADA is a civil rights law. When we don’t follow the law because it snows, we’re still violating people’s civil rights. People are being denied equal access and opportunity.”

Clearing sidewalks isn’t just a nice thing to do: It’s a legal obligation. Seattle law states that property owners are responsible for maintaining sidewalks, including making sure snow and ice do not pose a hazard to pedestrians. But there is little consequence for failing to do so, especially since each winter Seattle rarely gets more than one snowstorm that sticks on the ground for more than a day.

The Seattle Department of Transportation (SDOT)  is responsible for all the city’s roads, but in a blog post it explains that the department gives priority to main thoroughfares: “Those biggest, busiest, most critical streets with major transit and life-safety services are our top tier. … We simply can’t treat and plow every street in the city. It’s not practical and not safe. Plus, for those especially narrow, hilly, or curved streets we’d have to start towing cars to get our plow blades safely through.”

SDOT did not respond to a request for further comment.

Lewis said he doesn’t necessarily blame property owners for failing to clear their walks. Because snowstorms are infrequent here, many people don’t own snow shovels or keep salt and other deicers on hand. When a storm hits, sidewalk-clearing supplies disappear quickly. “We tried to buy a snow shovel for our driveway. They were not to be had,” he said. “As long as snowstorms don’t happen very often, it might be a hard fight to compel people to get the equipment.”

Because of the relative rarity of icy sidewalks in Seattle, Lewis puts it low on his list of priorities for the disabled. Many of the most pressing accessibility issues cause problems regardless of weather. There are broken sidewalks and steep hills to navigate, and buildings that technically qualify as accessible but offer access only through ramps that go around the back of a building instead of front entrances. There are missing curb ramps that make sidewalk travel in a wheelchair impossible. In 2017, the City of Seattle settled a class-action lawsuit claiming that it was violating the ADA because so many intersections lacked curb ramps. The city is supposed to build 22,500 curb ramps over the next 16 years.

Icy sidewalks aren’t a top issue for Rooted in Rights, either. The group's big push now is for the passage of legislation in Olympia to allow Seattle to use camera enforcement on drivers who block crosswalks at the intersection. “Blocking the box” creates dangerous situations for wheelchair users, who have to swerve around the cars in their path, hoping other drivers see them. Cars that block curb ramps in a crosswalk force wheelchair users to roll up the side of the street to find a driveway that gives them access to the sidewalk again.

But Matthews thinks a shift in thinking about infrastructure and a shift towards considering every user would go a long way to improving accessibility — in sun, rain or snow.

“For whatever reason, when the city thinks about priorities, there’s ‘people’ and then a step beyond that there’s ‘people with disabilities’ instead of just thinking about how to make things accessible for everyone,” Matthews said. “If our city is accessible to somebody in a 250-pound power wheelchair, it’ll be more accessible to people not in wheelchairs, to parents with strollers, everybody.”