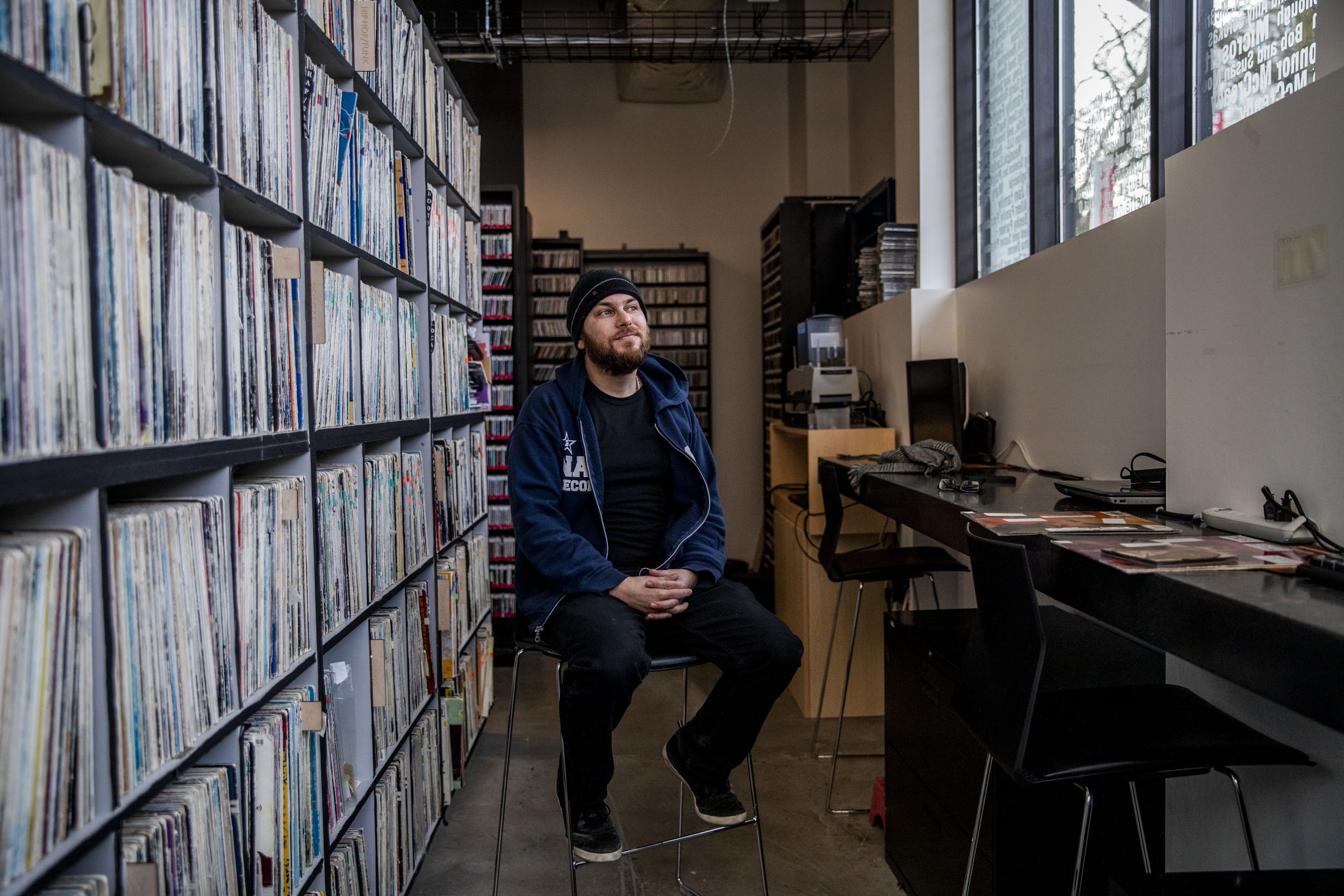 William Myers, aka DJ Chilly, at the KEXP studios in Seattle on Feb. 7, 2019. (Photo by Dorothy Edwards/Crosscut)

William Myers, who goes by DJ Chilly on KEXP, has been exclusively playing Latin American music since 2011, giving exposure to local acts like Tres Leches and mainstreamers like Café Tacuba.

But he’s never broadcast his El Sonido show from a Latin American country — until now.

Myers, arguably Seattle’s biggest ambassador of Latin American music, is off to Mexico City’s NRMAL festival at the end of this month. He will join KEXP hosts Kevin Cole and Cheryl Waters for four days of live broadcasts that will feature live performances with singer Ximena Sariñana; indie bands Little Jesus and Quiero Club;  and others.

He’s travelled throughout Latin America to hunt for music for his Monday night show. Going from music festivals to conferences, he was impressed when he stumbled upon NRMAL, which featured interesting venues like a park and playground and handmade decorations and signage.

“How NRMAL was done was really DIY,” Myers says. “I love how they were really unique in their musical selection and were not afraid to be eclectic. They mixed Anglo bands and Latin bands and usually, it's one or the other.”

KEXP previously has broadcasted from Iceland and Paris and, most recently, London, where it celebrated International Clash Day. The Mexico City broadcast will be a first for the station. It's an opportunity to reach and empower artists in other communities and connect them to a global audience, the station says.

Myers has seen the popularity of the Latin American music scene rise in the past couple years. He's happy to have had a role in exposing audiences to new musical artists. Delivering Latin sounds to the public is more than just about exposing music, he adds, it’s about creating bridges.

“These are amazing cultures, amazing music scenes, and these are people we want to partner with, help, share and support,” he said.

Myers, whose DJ name is a reference to the penguin cartoon character Chilly Willy — and not a reference to a hot pepper — was interviewed in the KEXP DJ’s lounge the other day. He sat on a couch surrounded by orange-painted walls and shelves packed with CDs and vinyls.

He spoke about the upcoming live broadcast, the surge in popularity of Latin music, and his passion for the music.

I wasn’t sure if people would dig rock in Spanish or hip-hop, but KEXP is really open minded, as is our general audience around the world. So I really went with it because their response was great and there's not very many outlets for that kind of music — especially on radio.

On whether being non-Latinx matters in hosting a Latin music show:

I’m a white male who lives here in the U.S. and I happen to live here in Seattle and have worked my way up in KEXP, which is a unique outlet. Being who I am, of course, gives me privilege. Having KEXP, which has been around for longer than 40 years, we had an audience already and had the tools. That’s why we have to use these tools and this privilege and this audience to share this kind of music.

Should the show be hosted by a Latinx person?

Not necessarily, but I would like to see that happen in the future. One-hundred percent that’s something I would like to see happen eventually. In general, I’d like to see more Latinx hosts and DJs in radio on all sorts of programs. My current dream is perhaps to have a Latinx co-host for El Sonido. We definitely need to have more representatives of the Latinx communities and I’d love to help support that.

Behind the scenes, I want to include more Latinx talent. My current producer/social media manager is from Argentina and the team is growing. For example, we’re doing weekly playlists with curators from Latin America.

The traditions of those countries because that influences artists whether they’re incorporating traditional sounds or not. Gepe, who we had here, is from Chile and he does pop music but incorporates sounds from the Andes. Say they’re just a punk rock band — the difference in what they’ve grown up listening to, where they live, how their lives are give a unique approach in sound and lyrics. They’re coming up with a unique twist.

On the power of music:

Music is a humanizer. It helps you understand the differences and similarities in different people. You might have a stereotype of a culture or country but when you hear the music, it’s a different language. It’s a universal language. It’s a connector to people who might not know much about Latin America, but you can connect on that musical level. You can’t stop music with a wall.

Crosscut also asked him to suggest some songs.

Best break up song and or single song?

Best song to jog to?

I like to jog, but it’s hard, so I need something with a crazy aggressive sound and uptempo. Usually mixtapes from Brazil’s Tropkillaz.

Best song to study to?

Best song to pop a party off to?

Depends on the party. I like Buyepongo “Maestros (Captain Planet and Canyon Cody Remix)” or “Boriqua Anthem.” Classic cumbias can usually get it going, too.