In Methow Valley, locals hope D.C. lawmakers will stop a copper mine

The Senate just passed a bill that would place a moratorium on developing an area rich in copper and currently home to a thriving tourism industry. 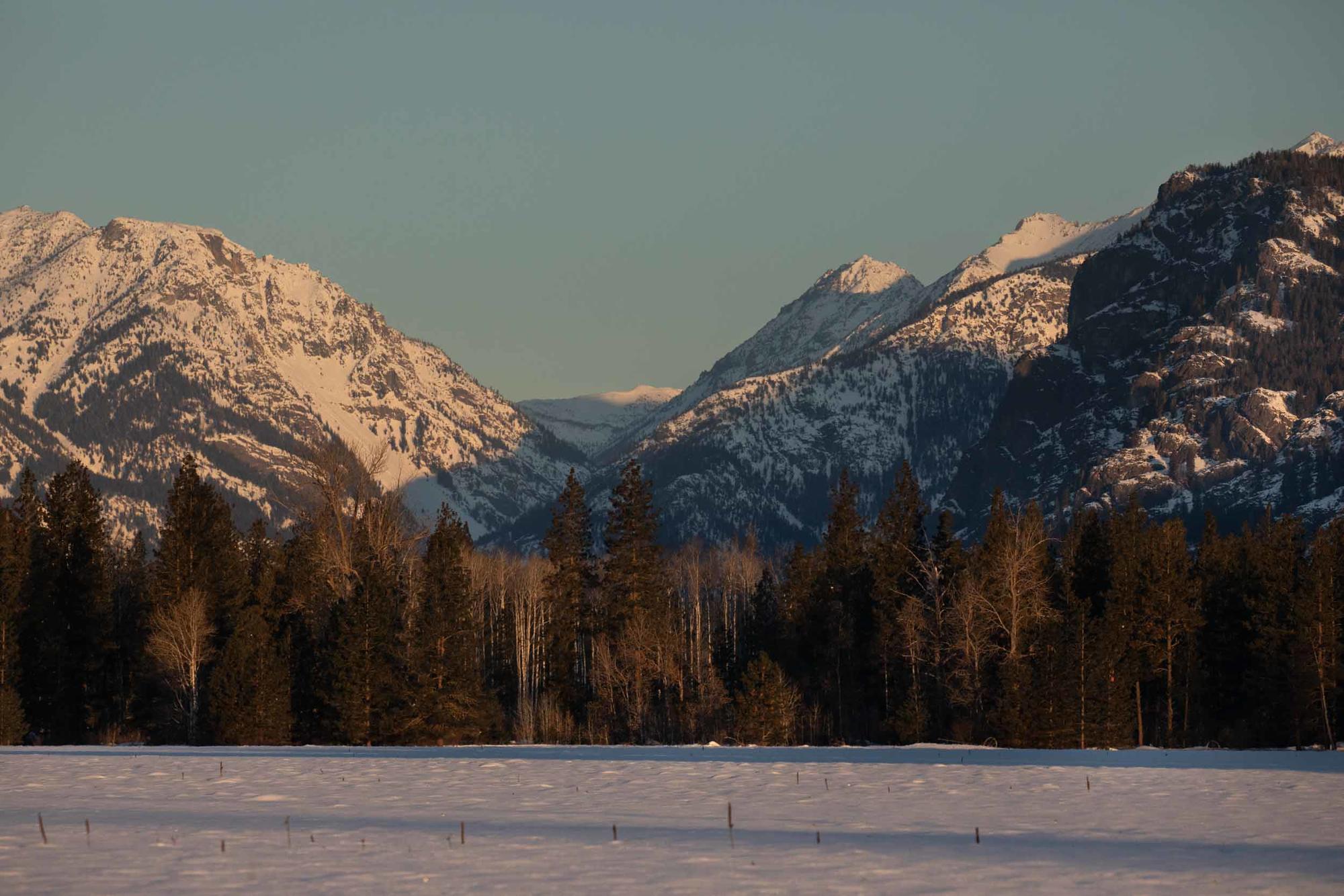 A bird could fly the distance between the general store in Mazama and a proposed 531-square-mile strip-mining operation in about 10 minutes, a journey that includes traversing a vertical mile.

Owned and operated by Ric and Missy LeDuc, the store serves the Okanogan County town’s population of maybe 200 in Washington’s northern Cascades, about 2,000 feet above sea level. Just north of the hamlet is 7,000-foot Goat Peak. To the east of Goat Peak, a short ridge stretches to Flagg Mountain — a peak usually missing from maps and guide books. All of this towers over Mazama’s main road — you have to twist your neck backwards to see the sky from outside the store.

On the opposite side of the ridge and Flagg Mountain is the site currently targeted by Blue River Resources, a Vancouver, B.C., mining company that has had its eye on the land since 2013. The company sees potential to extract copper, up to 1 billion pounds, or 500,000 tons, according to its website.

Ric LeDuc is a free-market business guy. He’s pro-logging. A tree hugger, he ain’t. Still, he’s against the proposed copper mine, and he isn't alone.

“This would be a detriment to every other business in the valley and to our lifestyle,” LeDuc said.

LeDuc and other residents in the valley opposed to the operation are looking to Washington, D.C., where a bill by Sen. Maria Cantwell, D-Wash., was tucked inside a package of roughly 110 natural resource bills bound together by Sen. Lisa Murkowski, R-Alaska, and Cantwell. The Senate passed that package 87-7 on Tuesday.

Cantwell’s bill, backed by Sen Patty Murray, D-Wash., would install a 20-year moratorium on mining in those 531 square miles. U.S. Rep. Dan Newhouse, the Republican congressman who represents the Okanogan County area, has also backed the bill, which now goes to the U.S. House, where it is expected to receive bipartisan support.

In addition to the 20-year moratorium on mineral mining in the upper Methow Valley, the package of bills also includes a detailed mandate to better coordinate water conservation and distribution in the Yakima River Basin, which is dealing with erratic water flows resulting from shrinking snowpacks in the Cascades. Another bill would improve volcanic monitoring in Washington and Oregon.

Elsewhere in the United States, the package would add almost 21,000 square miles of new federally protected wilderness, 367 miles of new wild and scenic rivers, and 2,600 new miles of trails. One bill would provide new GPS and drone technology to fight wildfires.

“In the Methow Valley, [the bill] removes [this land] from future mining and development,” Cantwell said Tuesday before the vote on the package. After passage, she added: “Whether for farming, fishing, or recreating outdoors, clean water plays a central role in the outdoor economy of the Methow Valley. We can’t let destructive mining put that at risk.”

“Anyone who has had the good fortune of visiting or living in the Methow Valley knows the headwaters are a priceless resource and certainly worthy of protection,” Murray said. 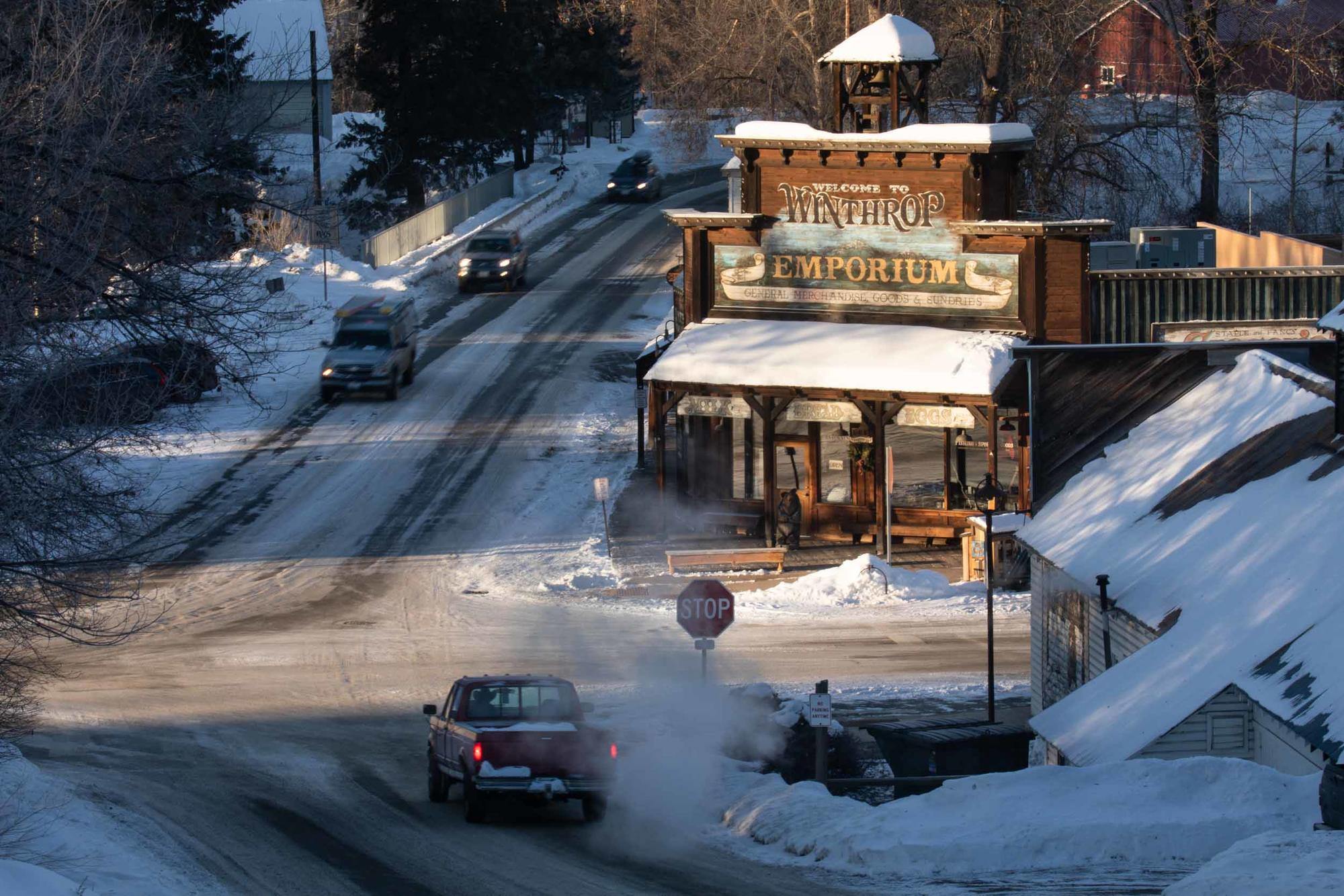 A four-way intersection where mining equipment would travel through on its way to Flagg Mountain copper mine, in Winthrop, Washington, Feb. 5, 2019 (Photo by Ryan Bell for Crosscut)

A four-way intersection where mining equipment would travel through on its way to Flagg Mountain copper mine, in Winthrop, Washington, Feb. 5, 2019 (Photo by Ryan Bell for Crosscut)

The narrow Methow River Valley is about 80 miles long, stretching northwest from Pateros on the Columbia River to the hamlets of Twisp, then Winthrop and then Mazama — all with various degrees of 19th century Western ambiance. The valley connects with State Route 20, also known as the North Cascades Highway, at Twisp, and then the road winds through the Cascades to Sedro-Woolley. Each winter, the pass west of Mazama closes for roughly five months.

The 531 square miles considered for the moratorium are north, east and west of Mazama. Thirty-four sites in that zone were mined or at least prospected before the 1940s, according to a U.S. Forest Service report. The Flagg Mountain area north of Mazama was one of the most productive in mining copper, gold and silver prior to the 1940s, the report said. The area was mostly dormant until 1970, when there were about four years of exploratory drilling to map out mineral deposits, including copper.

Flagg Mountain and four other areas in the vicinity of Mazama — about 11 square miles in total — are the best spots to hunt for copper and other minerals, the Forest Service report said. Mazama is at the southern tip of a long narrow vein of copper that stretches north through British Columbia, almost to the Yukon. Eight copper mines are scattered along that vein — all in British Columbia.

In mid-2013, Blue River Resources announced that it would explore the area around Mazama for a potential copper mine.

According to Twisp Mayor Soo Ing-Moody and resident Maggie Coon, Methow’s Valley’s residents did not learn about Blue River’s plans until May 2014, when the Forest Service official told them. Coon responded to the news by organizing the grassroots Methow Headwaters to oppose the mining proposal.

About 150 Methow residents attended the first community meeting in mid-2014, in which the Forest Service briefed them about the project in Winthrop. Blue River officials attended and were asked to speak. They declined to do so, Ing-Moody and Coon said.

In fact, Blue River has never conducted outreach efforts to the Methow community to discuss the proposed mine, Ing-Moody, Coon and LeDuc said.

Blue River officials have not responded to numerous requests by Crosscut for comment.

“It’s not just a copper mine, but a very huge copper mine,” Ing-Moody said. “We would be jeopardizing the current rural economy,” 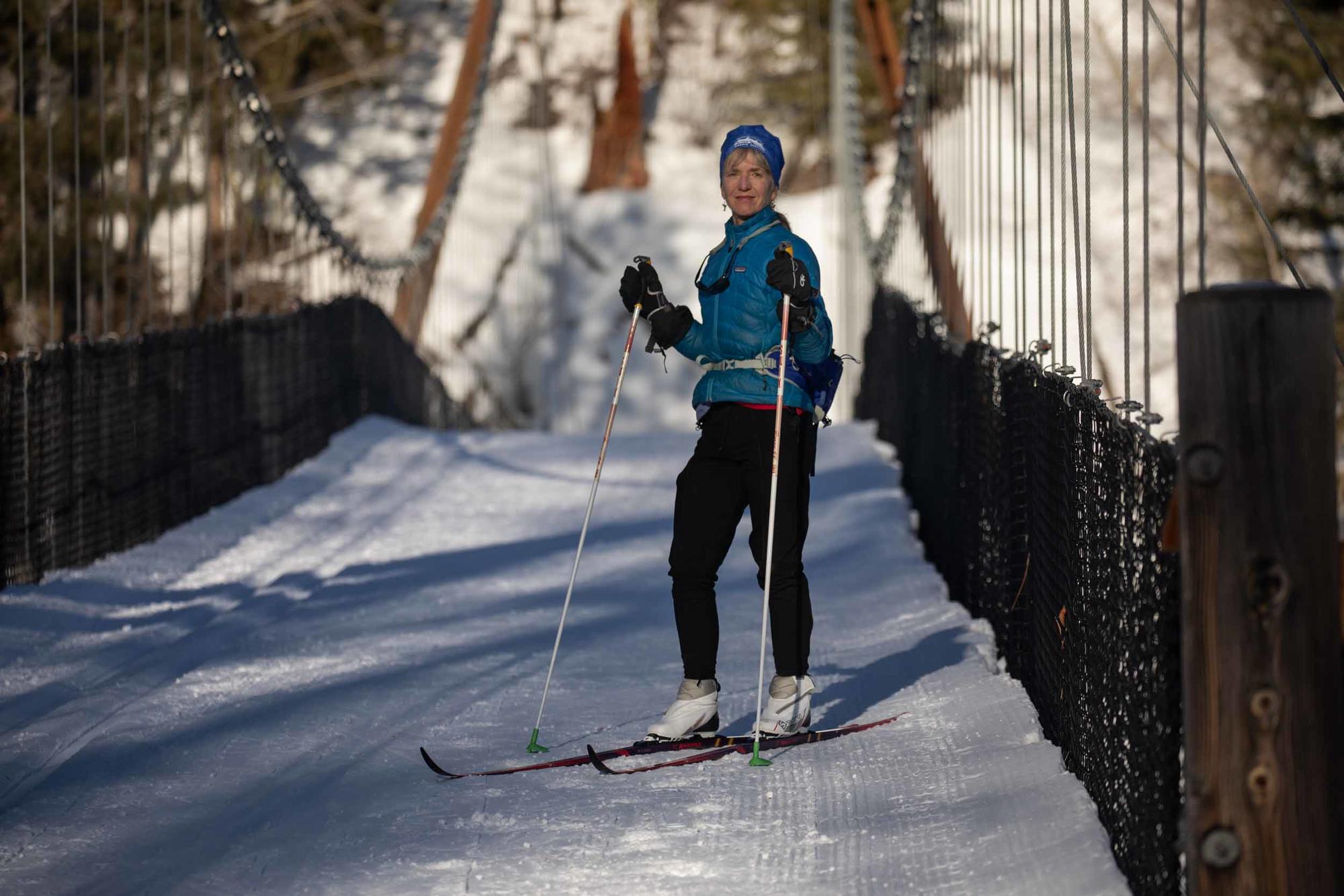 Maggie Coon of the Methow Headwaters Campaign on the Methow Community Trail, a 200-mile trail network that would be affected by the proposed copper mine on Flagg Mountain, in Mazama, Washington, Feb. 6, 2019. (Photo by Ryan Bell for Crosscut)

Maggie Coon of the Methow Headwaters Campaign on the Methow Community Trail, a 200-mile trail network that would be affected by the proposed copper mine on Flagg Mountain, in Mazama, Washington, Feb. 6, 2019. (Photo by Ryan Bell for Crosscut)

Tourism, along with some farming and ranching, is a major economic driver of the Methow area. The Forest Service report said 22 percent of Okanogan County’s jobs in 2016 involved tourism. Hiking, hunting, whitewater rafting, fishing, mountain biking and cross-country skiing are major businesses in the valley. There are at least 120 miles of Nordic ski trails that alone generate at least $4.5 million directly, $4.1 million indirectly and $2.7 million through related industry earnings annually in the Methow Valley, the report said.

Overall, the Methow Headwaters organization estimates that the valley’s tourism attracts roughly $150 million annually to Okanogan County, arguing the ripple effects of the debris and tailings from a mine would hurt the pristine waters, skiing and hiking trails, and hunting habitat that attract visitors.

“The ramifications to our watershed are far-reaching,” Ing-Moody said.

“This is not a campaign against mining, but a campaign to protect this watershed,” Coon added.

Some locals disagree. Ing-Moody noted that the proposed mine would use SR 20, which is closed every winter. To the east of Mazama, the highway is narrow, with a sharp 90-degree turn in downtown Winthrop, which would be difficult for huge copper-ore-hauling trucks to navigate. And the two roads entering the Methow Valley from the east — SR 20 and SR 153 — are narrow, winding and one lane in each direction, Ing-Moody noted.

Coon, Ing-Moody and LeDuc said they are not aware of anyone in the valley supporting the proposed mine.

The Methow Headwaters campaign picked up the support of about 80 businesses in 2014 — a number that has grown to about 150 businesses today. At a Bureau of Land Management meeting in Winthrop concerning the mine, held Nov. 23, 2018, about 400 people showed up, and no one spoke in support of the mine, according to the Methow Valley News.

“Seldom has something like [the grassroots opposition to the mine] has had so broad support,” Ing-Moody said. “The business community in the Methow Valley really stepped up,” Coon added.

After five years, the mining issue could be entering an endgame stage.

In 2016, Cantwell and Murray obtained a two-year moratorium on mining in the 531-square-mile zone. This resulted in the Forest Service doing an environmental assessment of whether the moratorium should end or be extended for another five or, possibly, 20 years. Then the federal Bureau of Land Management — which is in charge of mineral issues on federal land — was supposed to hold a public meeting on the matter and send that input to then-Interior Secretary Ryan Zinke for his decision. The deadline for Zinke’s decision was Dec. 30, 2018.

In September, Cantwell, Murray and Newhouse praised the Forest Service’s recommendation. “From salmon to farming and outdoor recreation, the Methow Valley holds a special place in the Washington way of life. We can’t afford to lose this area to copper mining,” Cantwell said at that time.

Murray added: “At a time when so much of our environment and public lands are under attack, this is incredibly welcome news. It’s been my mission to carry the concerns of the Methow Valley community to Washington, D.C., to make sure we are protecting this environmentally-sensitive area and continuing to support the valley’s thriving outdoor recreation economy.”

Zinke never made a decision, and resigned on Jan. 2, 2019. That left the Interior Department’s final decision in limbo and now one or two bureaucratic steps will likely need to be tackled a second time, if this approach is revived, according to the BLM.

However, that might not be necessary, if the bill that passed the Senate on Tuesday earns passage in the House and a signature from President Trump.

“We are deeply appreciative that the Senate has acted in support of our community and all that makes the Methow Valley a special place," Coon said, following news of the bill's passage out of the Senate. "There are many areas where mining is appropriate, but the Methow Headwaters is not such a place.”

Coon and Ing-Moody are cautiously optimistic that the package will become law. “In this line of work, you hope for the best,” Ing-Moody said.

LeDuc is a bit more cautious. “Even without the current administration, nothing is a sure thing until it is done,” he said. 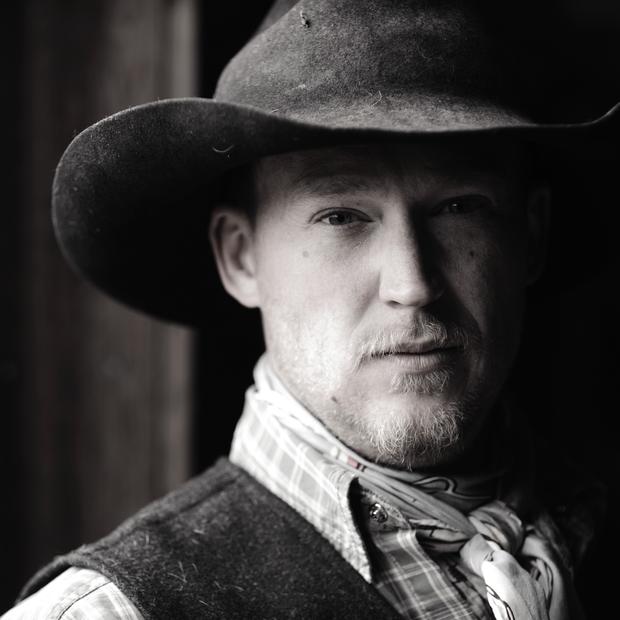 Ryan Bell is a writer and photographer based in Mazama, Washington.