A new generation will redefine the American dream 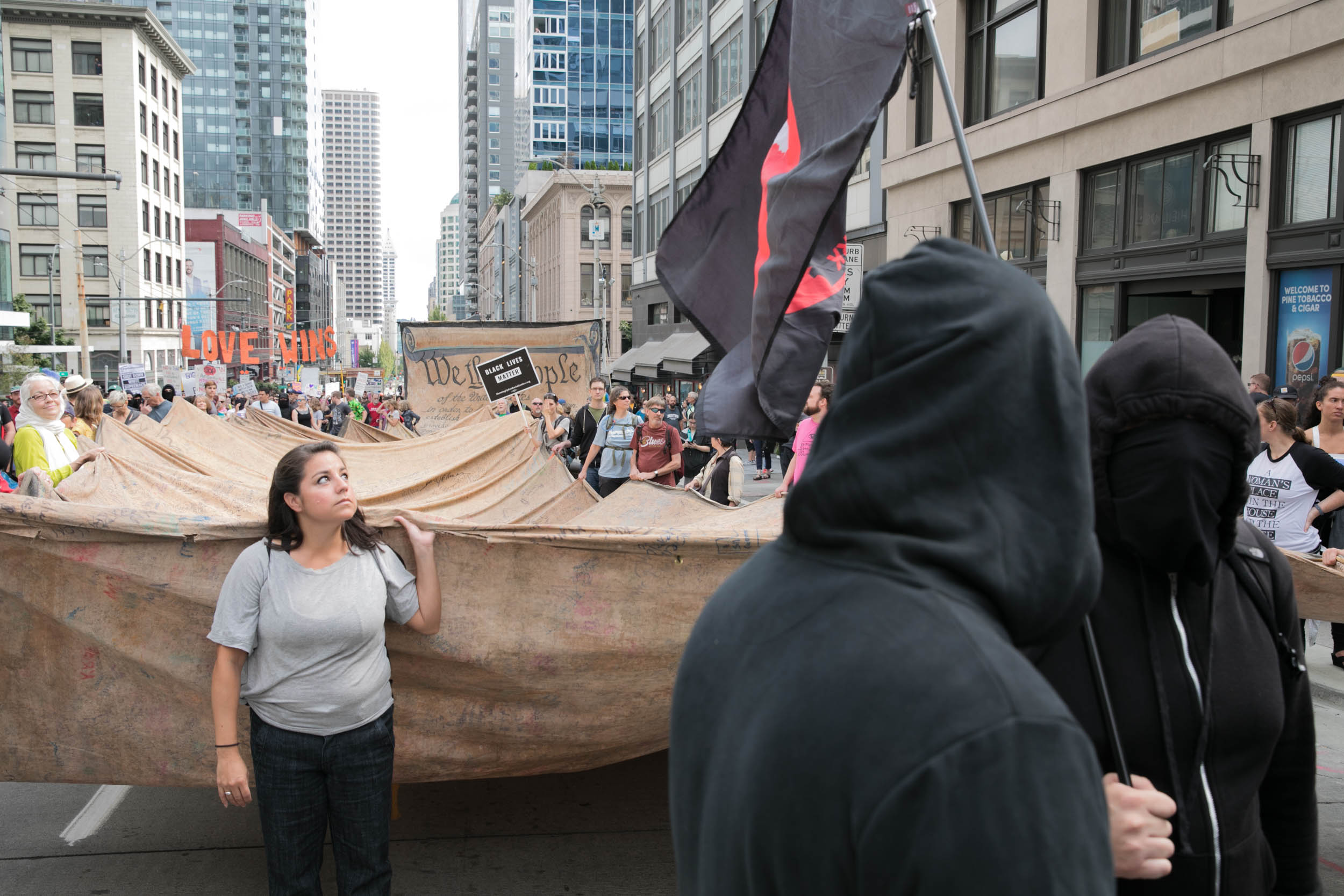 A woman and others help carry a 200-foot long replica of the U.S. Constitution, while a group of anti fascist protesters stand nearby during a Solidarity Against Hate march in Seattle, Aug. 13, 2017. (Photo by Matt M. McKnight/Crosscut)

There are pivot points in every life, opportunities to assess the gap between the vision we hold for our lives and the reality. Those can appear as moments of great clarity, or be manifested as crisis. In Passages, her groundbreaking book on the stages of adult development, Gail Sheehy writes about the phenomenon of rebounding: an issue unresolved in one stage of life that reappears in the next stage. It continues to appear until resolved by recognizing the issue, identifying how it differs from the intended result, taking responsibility for it, making a decision to do something different and finally implementing the decision with specific and verifiable steps.

Our United States of America is clearly rebounding. Racism, classism, misogyny and neocolonialism are the most obvious symptoms of unresolved matters. Limited space doesn’t allow me to expound on each, so I trust readers to do their own research. Let’s move on to how these symptoms differ from our vision.

Nothing more clearly stands as our national vision statement than the preamble to the Constitution:

We the People of the United States, in Order to form a more perfect Union, establish Justice, insure domestic Tranquility, provide for the common defence, promote the general Welfare, and secure the Blessings of Liberty to ourselves and our Posterity, do ordain and establish this Constitution for the United States of America.

The founders laid bare their dream of what could become the nation they sought to establish. In the Constitution itself, they followed with intentional steps for implementation. Unfortunately, and perhaps inevitably, those steps grew out of their limited world understanding. Carl Linnaeus, founder of plant taxonomy, was a contemporary of our nation’s founders. He stated definitively that there were as many as 10,000 different types of plants. Botanists now believe there are between 250,000 and 315,000.

The founders were apparently ignorant of magnificent millennia in African history, in which all of European history was rooted. They exhibited no knowledge of women’s powerful worldwide contributions in health, statecraft, science, mathematics and art. Although they plagiarized the structure of the Iroquois Confederacy, their grounding in a misguided theology of white supremacy and male domination resulted in a flawed document that has required modification over time to turn the nation’s trajectory back toward the essence of the original vision.

For better and worse, the nation we currently inhabit is constructed from building blocks of the founders’ imaginations and the added imaginings of every subsequent generation. Amendments to the Constitution attempted course corrections. Slavery is illegal. Women can vote. Sale and consumption of alcohol is legal in all states. Our citizens have shown the historic capacity to return to the original vision whenever it becomes overwhelmingly apparent we’ve strayed.

So here we are. At some point, the American dream got stripped of the words “establish justice … insure domestic tranquility …  promote the general welfare.” At some point it was redefined as owning things: picket fences, chickens in every pot. Multiple generations spent all their energy and passion in those pursuits. Religious doctrines of humility and service were replaced by the belief in wealth as a sign of approval from whatever god(s) one worships.

Where doctors and scientists once dreamed of solving community health crises, they now settle for pharmaceutical endorsements and private-pay clinics for the elite.

Where makers — blacksmiths, tailors, farmers — were once respected and rewarded for their skills, they became subservient to bankers, accountants and bureaucrats.

Where education of the young was once seen as a calling of great respect, it became viewed as the last career option.

Where people once became lawyers out of a passion for justice, they now settle for billable hours. Instead of law for the sake of justice, law became a brute-force contest of winning at any cost. “Is it constitutional?” became a euphemism for, “Can we get away with it?” rather than, “Does it bring us closer to our vision of justice for all?”

Instead of gauging success by the everyday person’s quality of life, we measure it by the quantity of goods exchanged. The Dow Jones Average, an index intended to follow the excess dollars of the rich, is touted as the standard of the nation’s economic health.

Once again, the country is falling short of its ambition. The financial meltdown of 2008 exposed the greed and vanity that have overtaken the aspiration of the American dream. Police kill innocent, unarmed, Black men with impunity. Women still fight to get equal pay for doing the same work as men. The city and state officials elected to keep their water safe poisoned a generation of children. Boys and men armed with weapons created for war murder children in their classrooms, people dancing in a nightclub, men and women sitting at their desks, elders praying in a church. Families are torn apart as homes become unaffordable. Babies and toddlers are ripped from their parents’ arms at an artificially drawn line in the dirt.

Quietly, a new generation has grown up watching the hypocrisies unfold. Now they rise with a detailed understanding of the original American dream’s promises, and a determination to call the question of its legitimacy. They dare us to make the next leap forward, go beyond the root-bound limits of the prior generations’ understanding, and move closer to realizing the real American dream embedded in the preamble. They demand our actions stand the test of the original filters of our democracy: is it just, does it promote peace within our nation and between our nation and the world, does it benefit everyone, does it affirm our commitment to freedom.

When I hear criticisms of Rep. Ilhan Omar, I hear echoes of media attacks on Muhammad Ali. When Rep. Alexandria Ocasio Cortez stands up to the Democratic Party’s inner circles, I’m reminded of Fanny Lou Hamer’s leadership at the 1964 party convention. Scholar Ibram X. Kendi tells us today what Malcolm X told us in the ‘50s and ‘60s. The voices of the past have found new vessels to reveal how far we have strayed from the potential of the original American dream.

In casting for this period piece Bernie Sanders would play Hubert Humphrey, the wise, insightful, kindly senator who was ahead of his peers, but couldn’t keep pace with visionaries who succeeded him. In a controversial act of nontraditional casting, Jerry Brown would be played by our very own undervalued, oft-besmirched seer with an ironclad conscience: Kshama Sawant.

It’s time for Bernie Sanders, Elizabeth Warren, the perpetual Clintons and their cadre to step off of history’s stage. Stand in the background, as advisers and inspiration, if they must. If they don’t have confidence they’ve bestowed younger generations with the tools to manifest a just and equitable society, they have failed anyway, so might as well get out of the way and let the newcomers forge the tools they need.

Some who have read this far are thinking, “What a naïve view of our world.” Yes, it may be, but wasn’t our country founded on that same naiveté? It took an enormous leap of faith, and more than a modicum of hubris, for the founders to believe they could govern better than a king or queen. The systems of our society have fallen behind the rest of the developed world because we have remained as root-bound as Carl Linnaeus.

It’s time to get out of the pot and shake those roots loose so they can grow. We need to support people in this new generation who are reimagining our nation’s vision as they stretch and grow beyond our comfort zones. We need to move out of their way as they ask: is it just, does it promote peace within our nation and between our nation and the world, does it benefit everyone, does it affirm our commitment to freedom. Else, we can remain set in the past and rebound until we die.